The ancients used basic mathematical and geometrical models, circumnavigated the earth, and observed natural phenomenon to draw conclusions about the earth’s shape.

A Roman philosopher and scholar discovered that the earth is round, but people back then were disbelieving, saying “Nah, the earth is flat!” However, there were some adventure junkies who thought it would be fun to actually find out if that Roman was correct. Ferdinand Magellan and Juan Sebastián Elcano are the adventurers I’m talking about. What these badass sailors basically wanted to do was circumnavigate the globe and determine for themselves if the round earth theory was correct. 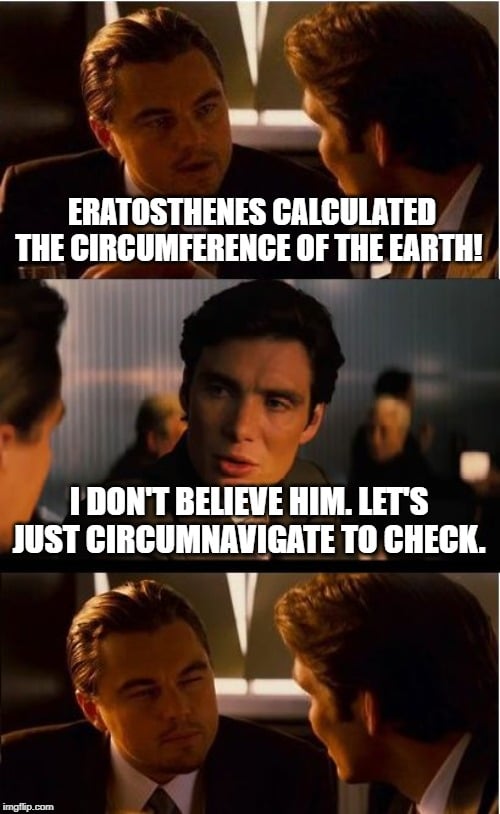 The early earth, according to humans, was nothing like a sphere; in fact, it was a uniquely flat planet with a hemispherical top, like a snow globe. It was believed that the earth was a flat disk floating in an ocean with a hemispherical sky at the top. The belief in this flat Earth was so strong among people that, even though it was established in the 3rd century that the earth was indeed round, the idea wasn’t widely accepted until around the 15th century. People cannot be blamed, of course, as they were naive and there were no satellite photos to convince them of Earth’s actual shape, so they relied on their observations. Also, science was understandable and accessible only to the elite during that time, which further reduced acceptance of the idea. 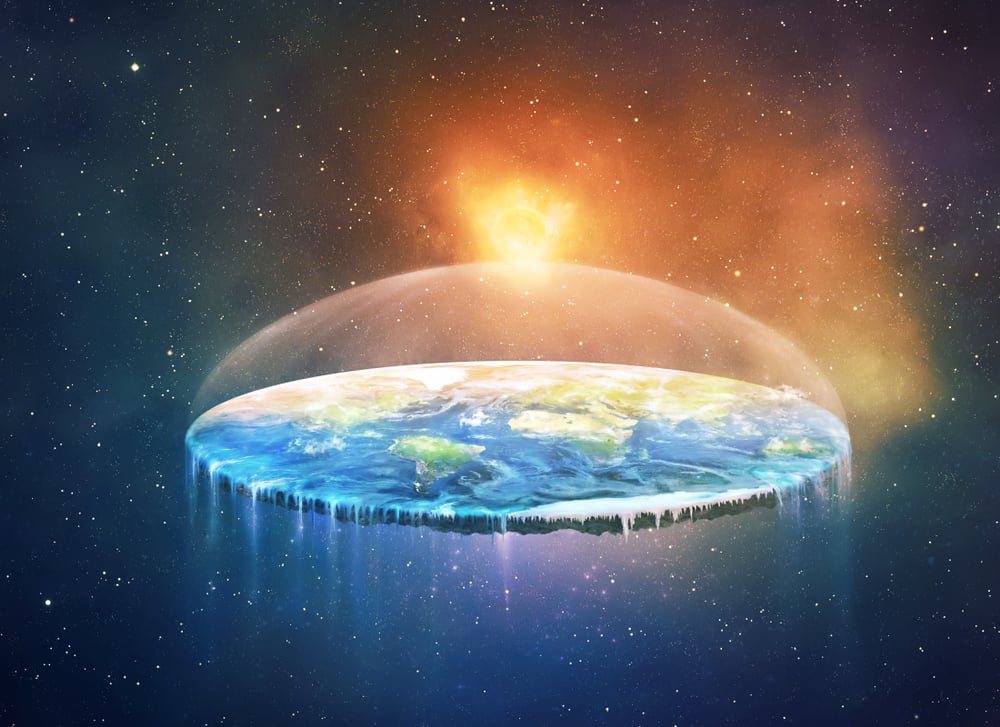 What shape if not flat?

Every modern scientific, philosophical and mathematical principle was formed or influenced by some wise Roman or Greek thinker. Back then, Rome and Greece were the hubs that founded and discovered new concepts that would spread to the rest of the world. Sometimes they made mistakes, yes, but they were generally an intelligent bunch.

Ancient times were full of people who held contradictory views. Homer strongly supported the flat earth theory, while Pythagoras, the famous mathematician, found the sphere to be the perfect figure and argued that the Gods would only have made a perfect figure for our planet. Then there was Anaximenes, who believed in a rectangular earth. Many more confusing and far more baseless theories also existed.

It is said that Socrates, the legendary Greek philosopher, first popularized the idea that the Earth was round instead of flat. He observed a lunar eclipse and realized that the shadow on the moon due to the earth was curved, which prompted him to deduce that the earth must be round if it were to cast a curved shadow. Additionally, the shape of the moon—a celestial body just like the earth—is also round, which helped him conclude that all the celestial bodies must be round, including our planet. He did not provide any mathematical or scientific backing, so there was no proof, except his observations.

Some scientists during the same period also noted that whenever ships arrived in port, the topmost portion of the ship would be visible first, not the whole ship. If the earth was flat, the whole ship should be visible from a distance. These types of observations helped to strengthen the theory of the round earth.

The Spherical Earth gets Scientific backing

After the round earth theory generated questions and discussions, it was necessary for philosophers and scientists to identify the correct answer. During this time, a Greek scholar Eratosthenes identified the circumference of the earth. He observed that on the 21st of June that year, the midday sun was directly overhead the well and the reflection could be seen at the bottom of the well in a town named Syene. However, he found out that at the same time, in a town named Alexandria (north of Syene and almost 800 kilometers away), the same could not be observed. The sun was not overhead there.

If the earth was flat, the shadow would be the same at both places. The shadow cast by the sun made an angle of 7 degrees with the vertical, which is approximately 1/50th of the circumference (i.e., 360/50=7.2) Hence, the circumference of the earth was estimated to be 50 times the distance between Syene and Alexandria. If you’re wondering what the distance between Syene and Alexandria was, it was 5000 stadia, a measurement unit whose use was prevalent during that time. This distance was apparently calculated by the travelers and would have been used by Eratosthenes. Stadia can range anything between 185-192 m. Hence, 50×5000=250,000 stadia, which is quite accurate to the planet’s circumference, considering the limitations of that time. 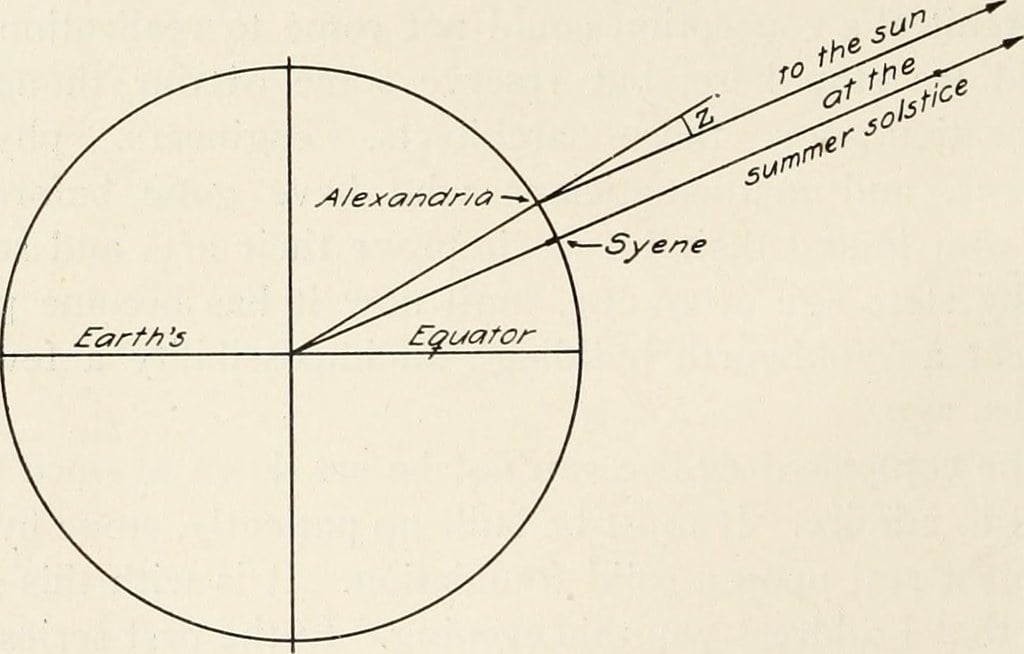 If you’re confused as to why Eratosthenes considered only the 21st of June that year, he did it because the Greeks were quite smart. By the time they found out the circumference of the planet, they had already figured out a few other things:

Aristarchus, another philosopher, proposed a theory by which he could obtain the size of the earth based on the lunar eclipse. When the earth is between the Sun and the Moon, a shadow of the earth is cast on the moon, which provided Aristarchus with the information he used to find the size of Earth. There are also references in both Indian and Islamic texts that agree with the spherical earth theory. The round earth theory gained momentum again in the 15th Century when voyagers began to travel extensively for trade. Juan Sebastián Elcano in 1519-1522 completed his voyage around the earth, thereby providing evidence of Earth’s shape. Columbus also attempted to find India, keeping the spherical earth in mind, but he was obviously destined for other discoveries.

People who lived 2000 years ago found out through common sense that the earth was round, yet there are some people in the 21st Century (today!) who doubt the work of countless scientists and mathematicians and still support the flat-earth theory! Ridiculous as it is, this is undeniably true… there are online platforms dedicated to supporting this theory, as well as conferences and a healthy dose of controversy. It’s hard to argue with science, but some people insist on staying locked in an ignorant bubble!