Yes, liquid nitrogen is dangerous. If you drink liquid nitrogen, it can cause severe damage to the mouth, esophagus and stomach. The liquid nitrogen would start to vaporize into nitrogen gas, exerting tremendous pressure, and the gas would not be able to find a way to escape from the body. This pressure would cause perforations of the vital organs inside the stomach.

Liquid nitrogen is used as a coolant in many applications, including preparing luscious ice cream and the coolest science projects at school/college. However, is it really safe? Let’s find out! 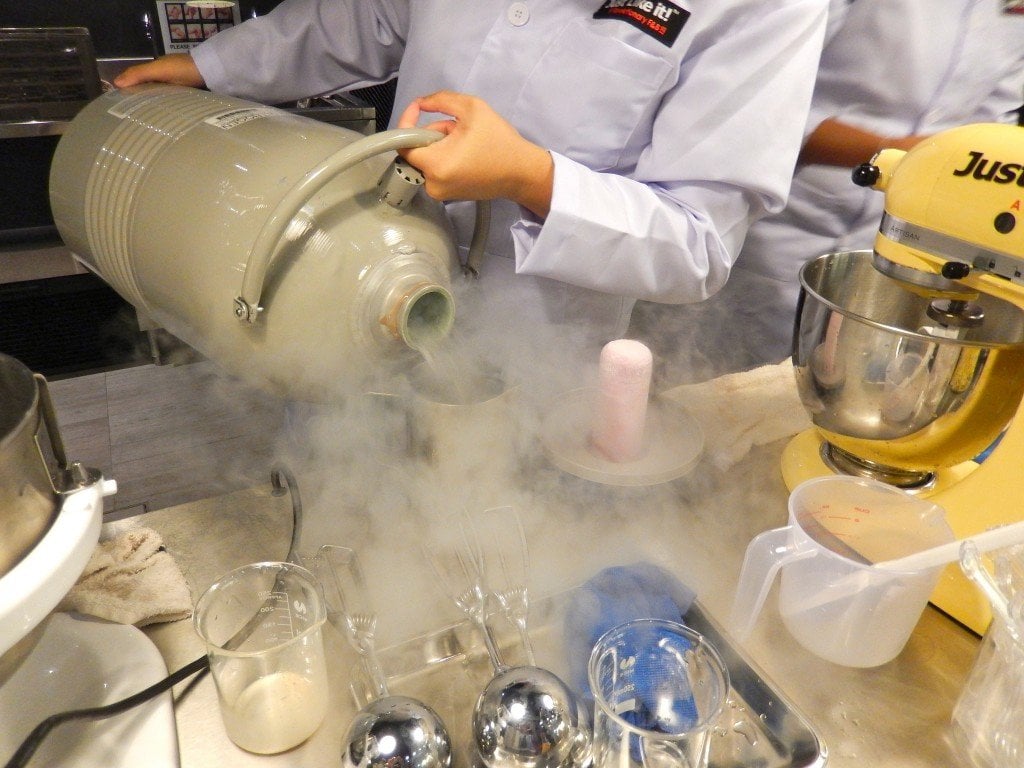 What  Is Liquid Nitrogen (LN2)?

Nitrogen is a common chemical element that occurs naturally in the soil, ocean and air. Liquid nitrogen is the liquefied form of nitrogen chemically produced by a process called fractional distillation. It is made of two nitrogen atoms sharing covalent bonds (N2). Liquid nitrogen is also denoted as LN, LN2 or LIN. It is extremely cold and is used to preserve foods and medicines. At normal pressure, liquid nitrogen begins boiling at −195.8oC (77K or −320.4 F)

You’ll commonly see science museums using nitrogen liquid to create enticing visual demonstrations relating to the qualities of extreme cold. For example, marshmallows can be dipped into liquid nitrogen, and instantly become frozen, and then demonstrators smash them into shards with a hammer.

How Is Liquid Nitrogen Stored?

Liquid nitrogen is stored in special insulated containers called Dewar flasks. These are double-walled containers that have an insulating vacuum between the walls. These flasks are vented to allow gas to escape the container to avoid pressure building up to dangerous levels. Depending on the design of the Dewar flask, liquid nitrogen can be stored for a few hours up to several weeks. 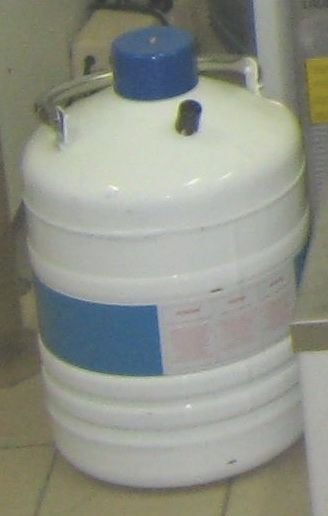 When working with liquid nitrogen, users must be extremely careful and should ensure that all safety precaution measures are taken before usage. Let’s take a closer look at what happens if you attempt to use liquid nitrogen carelessly.

As mentioned earlier, nitrogen has an extremely low boiling point. Moreover, it is stored in a specialized insulated container (Dewar flask) so that it doesn’t boil into a gas. If you happen to accidentally drop liquid nitrogen on your bare skin, however, it is likely to cause frostbite, the severity of which would depend on the amount of liquid nitrogen coming in contact with the skin. Upon coming in contact, liquid nitrogen absorbs heat from the skin and begins boiling rapidly—the transition phase from liquid to gas generates an enormous amount of pressure, which can severely damage your skin tissue. What’s even worse would be putting your fingers inside a container filled with the liquid nitrogen. According to John Emsley, a fellow of the Royal Society of Chemistry, if you did this, your fingers would turn to brittle rock and may even fall off your palm entirely! That’s why it is absolutely critical to wear proper safety gear when liquid nitrogen is being used.

Nitrogen has an enormous liquid-to-gas expansion ratio of 1:694. This means that even a small amount of liquid nitrogen can boil into a dense cloud of nitrogen gas that would quickly fill the room with nitrogen gas. Upon being converted to gas, the relative amount of oxygen decreases as the nitrogen starts quickly filling up the space. This can result in asphyxiation. People working on the ground with liquid nitrogen face the greatest risk of asphyxiation, as cold nitrogen gas is heavier than the air. Furthermore, as the nitrogen evaporates, there is the risk of the violent oxidation of organic matter in the vicinity.

There have been several instances of death due to asphyxiation, including a lab worker named James Graham, who died from asphyxiation while working with liquid nitrogen in Edinburgh. Clearly, it is necessary to ensure that the area in which liquid nitrogen is being used is properly ventilated.

What If You Drink Liquid Nitrogen?

Now that we know that even slight negligence in the handling of liquid nitrogen coupled with improper ventilation can lead to asphyxiation, what if you drink this freezing liquid? While sipping a drop of liquid nitrogen might not turn out deadly, guzzling down liquid nitrogen like a normal beverage can cause severe damage to the mouth, esophagus and stomach. When you consume it by drinking, the liquid nitrogen would start to vaporize into nitrogen gas, exerting tremendous pressure, and the gas would not be able to find a way to escape from the body. This pressure would cause perforations of the vital organs inside the stomach.

Also Read: What Is Laughing Gas? Does It Actually Make You Laugh?

A man in India accidentally drank liquid nitrogen and ended up with a hole in his stomach. This man, after drinking liquid nitrogen, felt an excruciating pain in his abdomen and experienced the sensation of breathlessness. He was immediately rushed to a hospital, where doctors found that he had developed a hole in his stomach. The doctors said that when the liquid nitrogen vaporized into gas, the N2 gas did not have an escape route, as the sphincter was closed. This lack of exit options led to the perforation (a hole) in his stomach. His heart rate, blood pressure, and oxygen saturation were also way outside the normal range. Luckily, doctors were able to save him by removing the damaged portion of the stomach and connecting the rest to the small intestine.

The bottom line is never work with liquid nitrogen without prior precautions and knowledge, regardless of whether you are opening a container with it inside, using it improperly without safety gear, or foolishly attempting to quaff it!