Looking at a solar eclipse without proper eye protection can damage your eyes, but it’s not likely to cause blindness. It’s important to use special filters or glasses to watch a solar eclipse to avoid any damage.

Yes, staring at a solar eclipse without proper precautions CAN do damage to your eyes, but saying that ‘it could make you blind’ is a bit of an overstatement.

Whenever there’s news of an imminent solar eclipse, stargazers get extremely excited and start counting down the days to when they will be able to see the sun partially/totally obscured by the moon. However, an unusual question that concerns many is whether the coveted event should be looked at with the naked eye? More specifically, can looking at a solar eclipse with unblocked eyes rob someone of their vision forever?

What Is A Solar Eclipse?

You must have learned about this at some point in high school – a solar eclipse occurs when the Moon passes between the Earth and the Sun in a way that it partially or completely blocks out our star. Solar eclipses can be total or partial and annular. In the former, the Moon completely obscures the Sun, whereas in the latter, only a part of the Sun is obscured.

Many stargazers and space enthusiasts look forward to this conjunction of three celestial bodies to observe such a visually amazing event. However, there’s also a certain degree of fright regarding how solar eclipses should ideally be observed, for we often hear that staring at the Sun during a solar eclipse with the naked eye can damage your eyes greatly, or in the worst-case scenario, blind you! 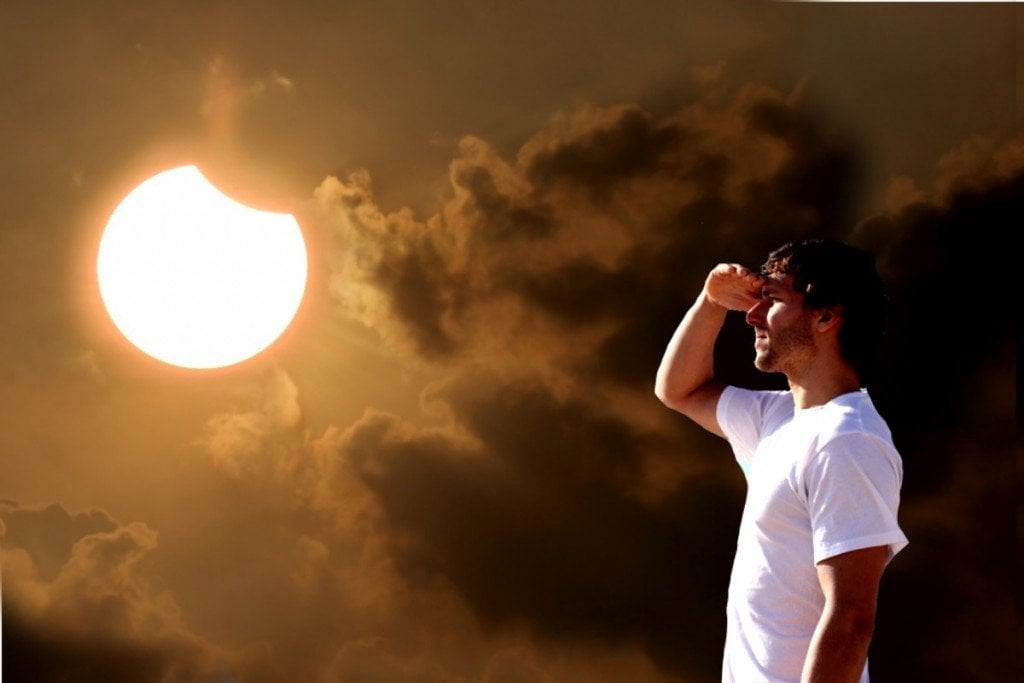 This is not a safe method of observing a solar eclipse

Well, it must be said that the fears of looking at the Sun without any protection to the eyes are not completely unfounded. Observing the sun with the naked eye during a solar eclipse can indeed have detrimental effects. In fact, staring at the Sun at any time is not good for one’s eyes. The reason is that gazing up at such an incredible source of light for too long can damage your retina.

Also Read: How Can Looking At The Sun Can Hurt Your Eyes?

Photic retinopathy is the term doctors use to characterize the damage to a patient’s eyes’ retina, particularly from prolonged exposure to a bright source of light, such as solar radiation, arc welders or lasers. This occurs when the retina, a screen on the back of the eyeball, is ‘burned’, typically during a photochemical or thermal injury. It’s generally known to affect people who stare at the Sun, watch a solar eclipse or directly view UV or other bright light sources.

Normal Days Versus A Solar Eclipse

Fortunately, we can’t stare at the Sun for too long anyway on normal days, as its sheer brightness is too much for human eyes to handle without some sort of protective layer covering them and decreasing the intensity of the incident light. However, during a solar eclipse, it’s relatively easy to gaze at the Sun for more than a few minutes, because a significant portion of the sun is ‘sheathed’, making it relatively comfortable for your eyes. As a result, your eyes’ usual reactions to such bright lights (like blinking and pupil contraction) are somewhat less likely to be triggered.

Moreover, the slow damage to the retina due to prolonged exposure doesn’t usually involve any pain, which is a bad thing, because people might go on staring at the Sun without realizing the damage they’re meting out to their eyes. The effects of damaged vision are only observed afterwards, when patients report symptoms like slight dimness of vision for some time, reduced visual acuity and other afflictions of the eye.

Permanent blinding is not usually seen as one of the results of a few minutes of staring at the Sun; however, it can do great, irreversible damage (may even lead to complete loss of vision) to one’s eyes if this exposure goes on for too long (Source). This is probably the reason behind the belief that the Sun is more dangerous to look at during a solar eclipse.

Is It Safe To Observe A Solar Eclipse Through My Sunglasses?

No, sunglasses don’t actually offer enough protection against the harmful rays of the Sun. There are certain sun filters that are specially designed for sun viewing. These have chromium, aluminum or silver deposited on their surface, which diminish the intensity of UV, infrared and visible light, making it safe to look at the sun through them. Some unsafe tools that are used for this purpose include medical x-ray films, color film, polarizing filters, photographic neutral density filters, etc. (Source). All in all, there is little danger in looking directly at a total solar eclipse; but if it’s a partial solar eclipse that you’re witnessing, make sure to put those glasses on before you gaze up at the brightest thing in our sky!

Lunar and Solar Eclipse Explained: A Beginner's Guide to Eclipses
If you wish to buy/license this video, please write to us at admin@scienceabc.com.
References
Share This Article