A moist environment is better for a wound, as it helps in regeneration of the tissue. Scabs impair wound healing by causing stress to the wound site.

I remember that when I was a kid, I was often told that one should always let their wounds get fresh air, especially if the wound is new. I neither had the brains nor the motivation to argue with that notion, and admittedly, giving a wound some fresh air just seemed like a logical idea. Interestingly enough, after all these years, I still see many people who leave their wounds exposed to air so that they heal faster.

However, when you go to the hospital with a fresh injury, one of the first things a nurse does is clean the wound and cover it up. Why do they do that? 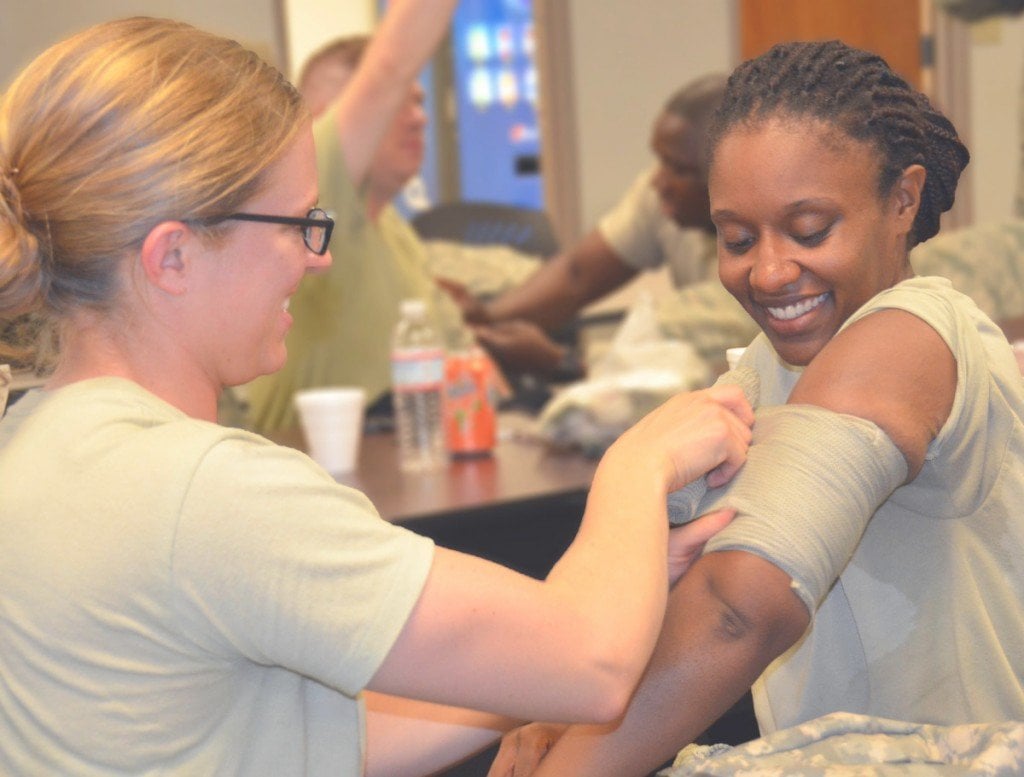 If leaving a wound exposed to the air is so good and promotes healing, then why do doctors recommend covering a wound with bandages and sterilized dressing?

Well, first of all, the notion that leaving a wound exposed to air helps with faster healing is a misconception. With the exception of minor cuts, bruises or scrapes, it’s always best to cover your wounds.

Do Wounds Heal Faster Covered Or Uncovered?
If you wish to buy/license this video, please write to us at admin@scienceabc.com.

The human body is a very interesting and efficient piece of biological machinery. It has different processes to deal with different kinds of injuries, but one of most common ways in which the human body reacts to a wound is by forming a scab. 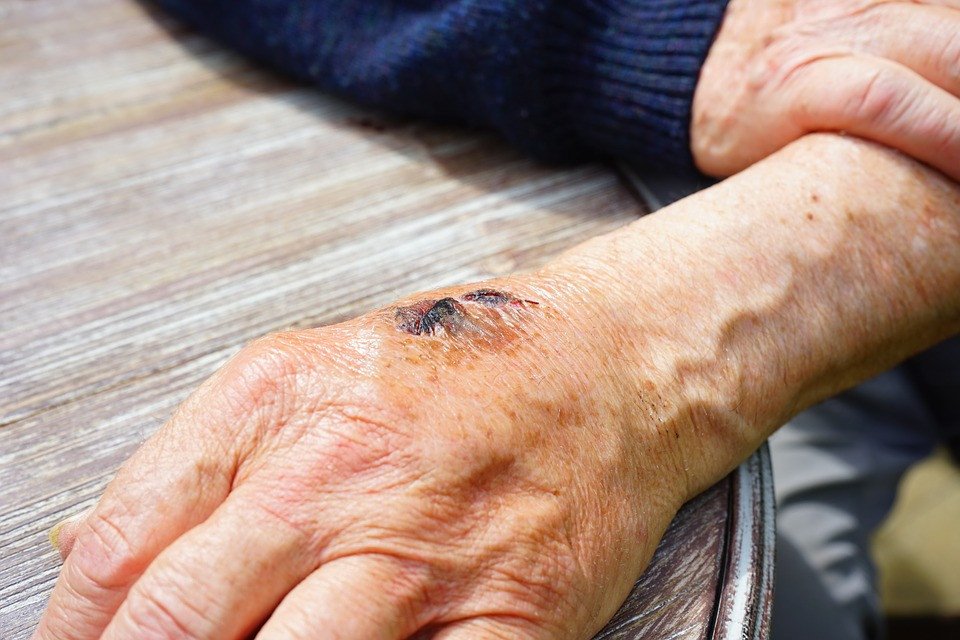 Scab formation starts as soon as you get injured and start bleeding. Special blood cells called platelets spring into action as soon as they sense that there is a ‘breach’ in a blood vessel. These platelets stick together like glue at the site of the injury (a cut, scrape or bruise) and form a clot. Proteins like fibrin create a mesh at the clot, further stabilizing the clot.

This clot acts like a biological protective bandage over the wound and prevents further bleeding. If the injured part of the skin (and effectively that clot) remains uncovered, the clot will dry out and harden up, forming a scab. We often tend to think of the formation of a scab as a sign of recovery. People even get a kick out of picking their scabs (gross).

Initial scab formation is part of the healing process, but beyond that, scabs aren’t desirable. The dry hard scab is just a by-product of the clot drying. In fact, the scab actually hampers the healing by erecting a barrier of dried-out and dead cells. Healthy skin cells must work their way beneath these dead cells to form new tissue and help in the healing process. 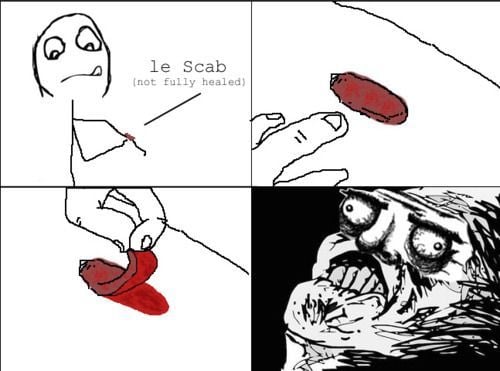 Why Is Covering A Wound Important?

Medics have known the importance of keeping a wound moist for millennia. The famous Greek physician and the ‘father of medicine’, Hippocrates, would dress wounds with bactericidal (bacteria-killing) salves made from herbs and plant extracts. However, the exact origins of the ‘let the wound air out’ belief isn’t certain.

One source of the myth might be the intent to keep the wound clean. An article by Dr Simonton from 1890 rebuts the claim of another doctor that keeping the wound dry and dressing it infrequently is the best way to prevent infections and promote healing.

The assumption is that a moist environment can become a breeding ground for bacteria. While this isn’t wrong, it doesn’t hold up in this case. If a wound is cleaned with water and a little disinfectant at the start, then the chances of infection are low. The body’s immune response, clotting, and inflammation all manage to fight pathogens very well. 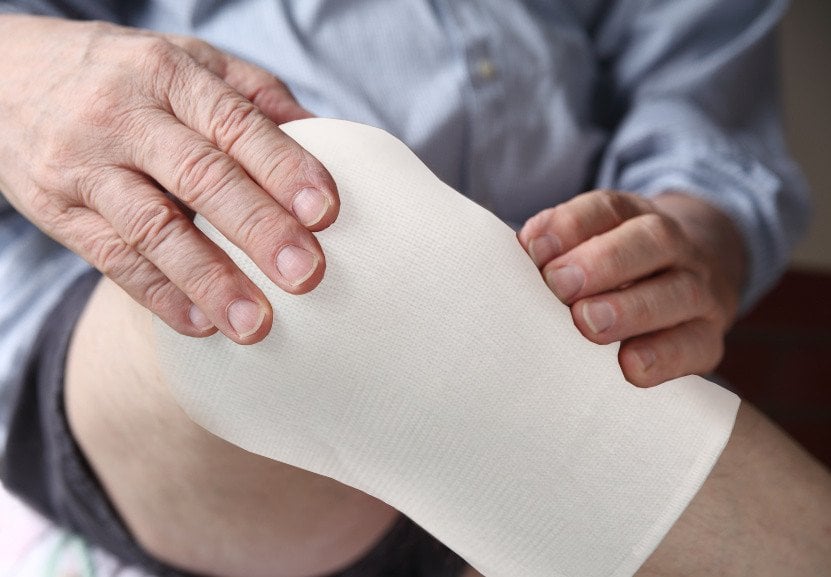 A well-dressed wound doesn’t get infected.

If a fresh wound is kept covered, it keeps the skin cells from drying out and forming a scab, which ultimately minimizes the chances of scarring at the site of the wound. Covering an injury does a lot of good things, including keeping it moist, which promotes better skin healing.

Covering A Wound With Band-Aid Will Accelerate Wound Healing

In 1962, researcher George Winters once and for all quashed the debate over Band-Aids. He compared wound healing in dry and moist environments and found the latter to be much better. The paper he published in Nature notes that “It has been found that epithelization is retarded by the dry scab which normally covers a superficial wound, and if the formation of the scab is prevented, the rate of epithelization is markedly increased.”

Further research has shown that a moist environment also accelerates the building of new blood vessels in the injured area (angiogenesis), in addition to old and damaged tissues being broken down and cleaned away, making way for new cells.

Covering a wound also significantly reduces the chances of infection, as it keeps germs, dirt and (potentially unclean) water from coming in contact with the injury. This is a good thing, because if germs, dirt and other unwanted things do reach the site of the injury, you might get an infection!

Furthermore, an exposed wound offers no protection whatsoever against the further worsening of the wound. If a wound is left uncovered, the scab can be scratched or torn off (we’ve already discussed humanity’s weird tendency to pick at scabs) and there are also chances of re-injury.

This is one reason why wounds in our mouths heal faster and without much scarring. The moisture from the mucus in the mouth and the saliva keep the wound in a nice moist environment. Saliva also has many chemicals that accelerate the healing process.

A bandage or dressing, in contrast, offers added comfort and cushioning to the wound. It also protects against re-injuring the spot, which is another plus.

Also Read: Why Don’t Cuts And Wounds Inside The Mouth Get Infected By Bacteria?

All in all, it’s best to cover your wounds, as it helps in protecting your body and accelerating the healing process!

How much do you know about wound healing?