While browsing through my social media, I saw videos of people walking and running over a liquid disguised as something quite normal. Those videos immediately caught my attention and got me curious.

After some searching around on the internet, I found an answer to my question. The secret to this viral trick is known as a Non-Newtonian Fluid. Let’s dig deeper into the science behind it!

We first need to refresh ourselves on three terms before we can understand the significance of Non-Newtonian Fluids.

Viscosity: We know that water flows faster than honey, because the viscosity of water is less than that of honey. The viscosity of a fluid is the measure of the amount of resistance it provides to its own flow. It arises due to the relative motion between the different layers of the fluid. This determines how thick the fluid is and how fast it can flow.

Stress: Stress is defined as the force per unit area applied to a material. It is useful in determining fluid behavior.

Strain: Strain is an outcome of applied stress. It is the measure of the amount of deformation in the body, in the direction of the applied force, divided by its original dimensions. 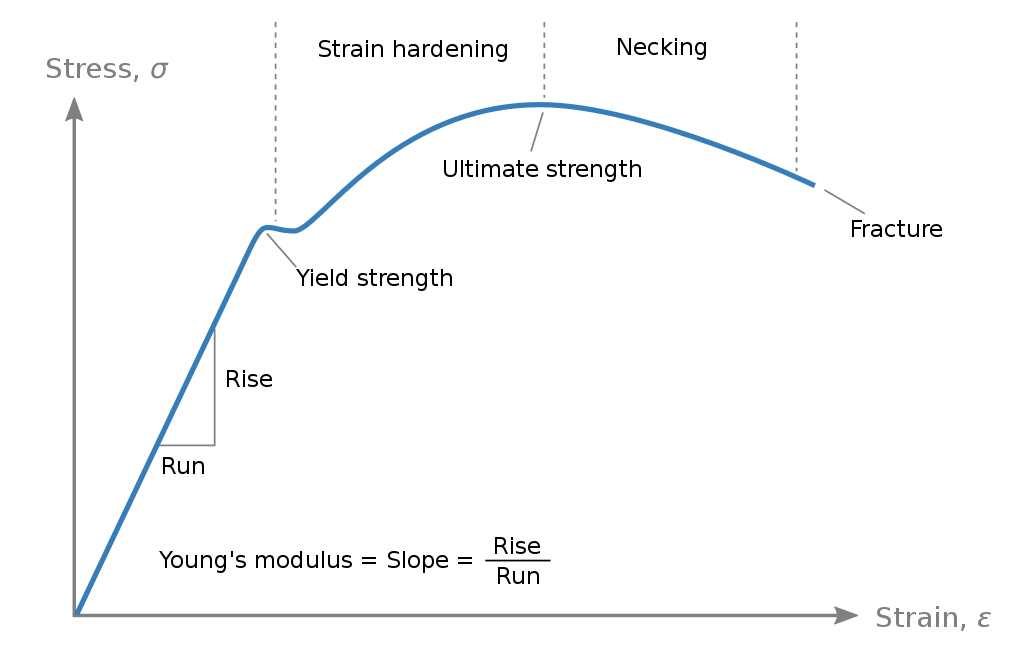 The Stress VS Strain curve shows the relation between the two. Initially, they follow a linear relationship, but then it becomes non-linear, implying that at first the stress and strain increase proportionally, but after some time, they are no longer proportional to each other.) (Photo Credit : Nicoguaro/Creative commons)

Viscosity and the abnormal behavior of stress and strain within a Non-Newtonian Fluid are what set these apart from other fluids.

Newton’s Law of Viscosity is the defining factor for the characteristic behavior of fluids. It states that the shear stress is directly proportional to the velocity gradient between the two adjacent layers of the fluid.

Therefore, fluids that follow Newton’s law of viscosity are known as Newtonian fluids. The viscosity of these fluids remains constant, even under the application of stress. Common fluids like water, alcohol, and mineral oil fall under this category.

On the other hand, Non-Newtonian fluids got their name from the fact that they do not follow Newton’s law of viscosity. The viscosity of these fluids changes under the application of stress and shows abnormalities in their state of matter. Quicksand, ketchup, and paint fall under this category. 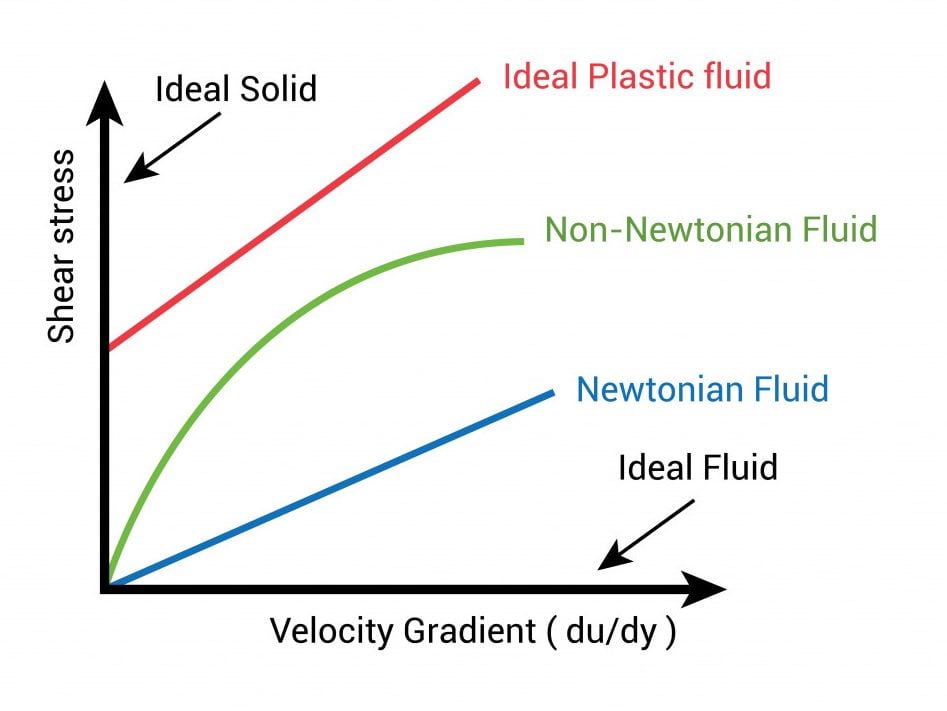 The graph shows the behavior of the different types of fluids, with respect to the Newton’s Law of Viscosity. (Photo Credit : zizou7/Shutterstock)

Is it Possible to Run on a Non-Newtonian Fluid?

Having defined the Non-Newtonian fluid, let’s try to understand how exactly it behaves and why.

Since viscosity is not constant for Non-Newtonian fluids, when stress (force) is applied to them, the state of the matter changes towards a temporary solid or liquid form. As soon as the stress is removed, the original state of matter is restored.

Imagine you have a container full of a Non-Newtonian Fluid that feels like a liquid. As soon as you punch the liquid and your hand touches the surface of it, the area of the liquid beneath your fist turns into a semi-solid. It returns to its original form as soon as the force is released. Interesting, right!? 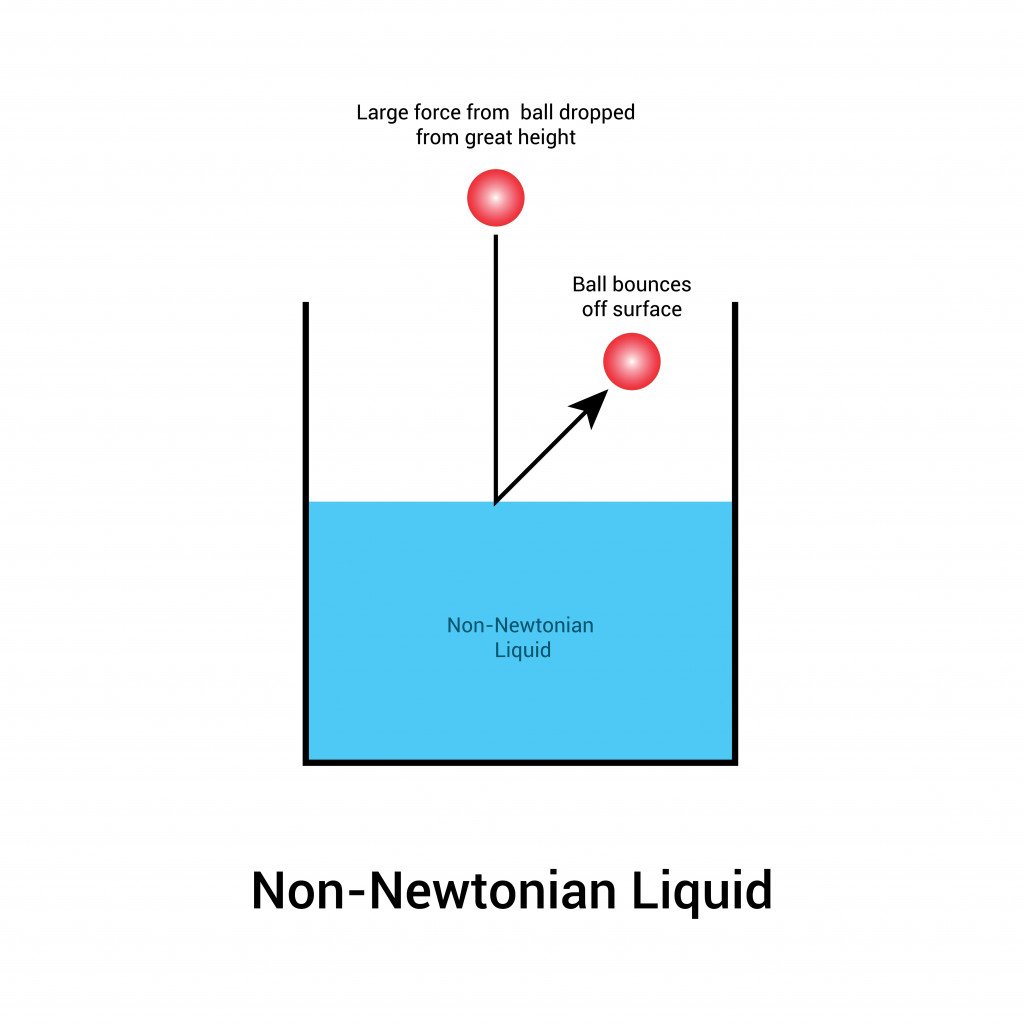 For example, when your ketchup bottle is almost empty, you need to tap the bottom of the bottle to squirt the rest out, but why? Because ketchup is a type of Non-Newtonian fluid; when force is applied to it in the form of a tap at the bottom of its bottle, it turns into a more liquid consistency, and it can then flow out of the bottle more easily.

Similarly, when you exert pressure on a Non-Newtonian Fluid while running over it, the fluid just beneath your foot turns into a solid, allowing you to hold and move forward. Thus, YES you can run over a Non-Newtonian fluid, but you have to be a pretty fast runner and keep your steps light! 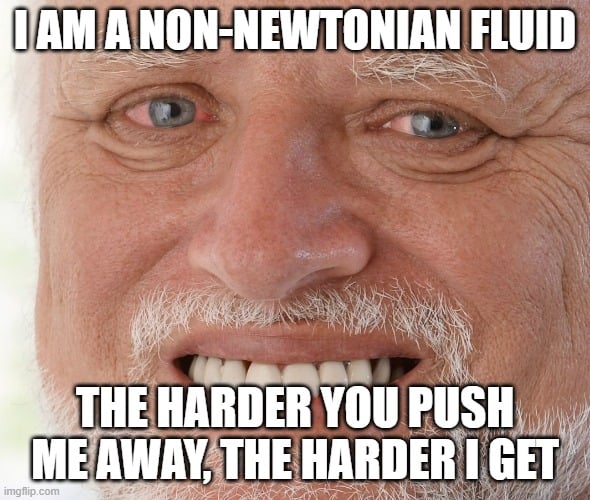 Don’t be a Non-Newtonian fluid in a relationship, else it will only get harder.

Interestingly, the exact molecular behavior of these fluids has not yet found a proper scientific definition or theory. Research has been underway to unveil this mystery for years now. What we know is only the tip of the iceberg.

According to our present understanding of these fluids, Non-Newtonian fluids have been divided into four categories, as follows:

An example of Dilatant is Oobleck—a mixture of water and cornstarch. You might have seen people walking over Oobleck in videos, where at first it seems like a liquid, but as soon as you put your feet on it, it turns into a solid.

This is the opposite of Dilatant. When stress is applied, it becomes less viscous, independent of time. An example of a Psuedoplastic is ketchup. 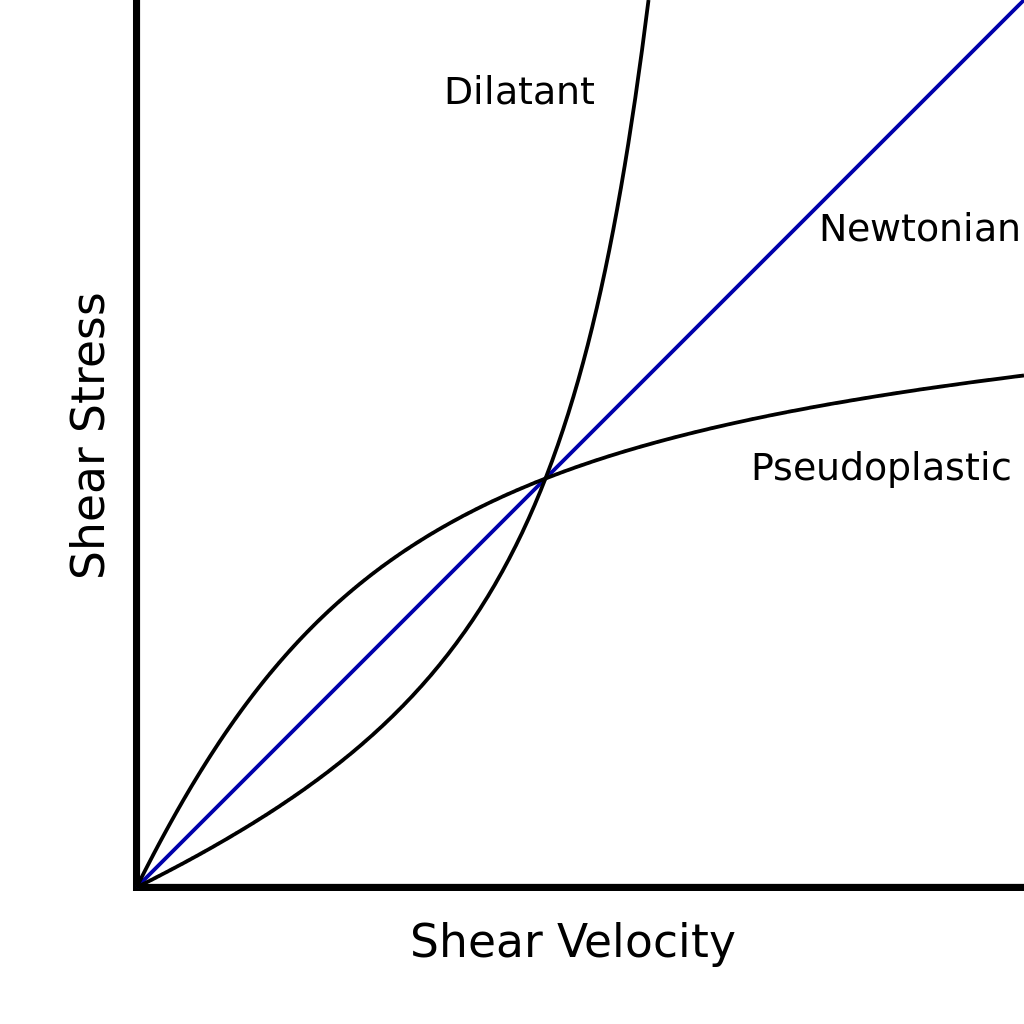 The graph shows the behavior of Dilatant and Psuedoplastic, and their comparison with Newtonian fluids. (Photo Credit : DirectEON /Creative commons)

This is similar to Dilatant, except for the fact that the increase in viscosity is time-dependent.

A common example is cream. When you first stir cream, nothing much happens, but if you keep stirring, the cream gradually thickens.

This is the opposite of Rheopectic. When stress is applied, its viscosity decreases and is dependent on time.

Honey is an example of a Thixotropic fluid. If you stir honey for a long time, it gradually turns into a more liquid form. 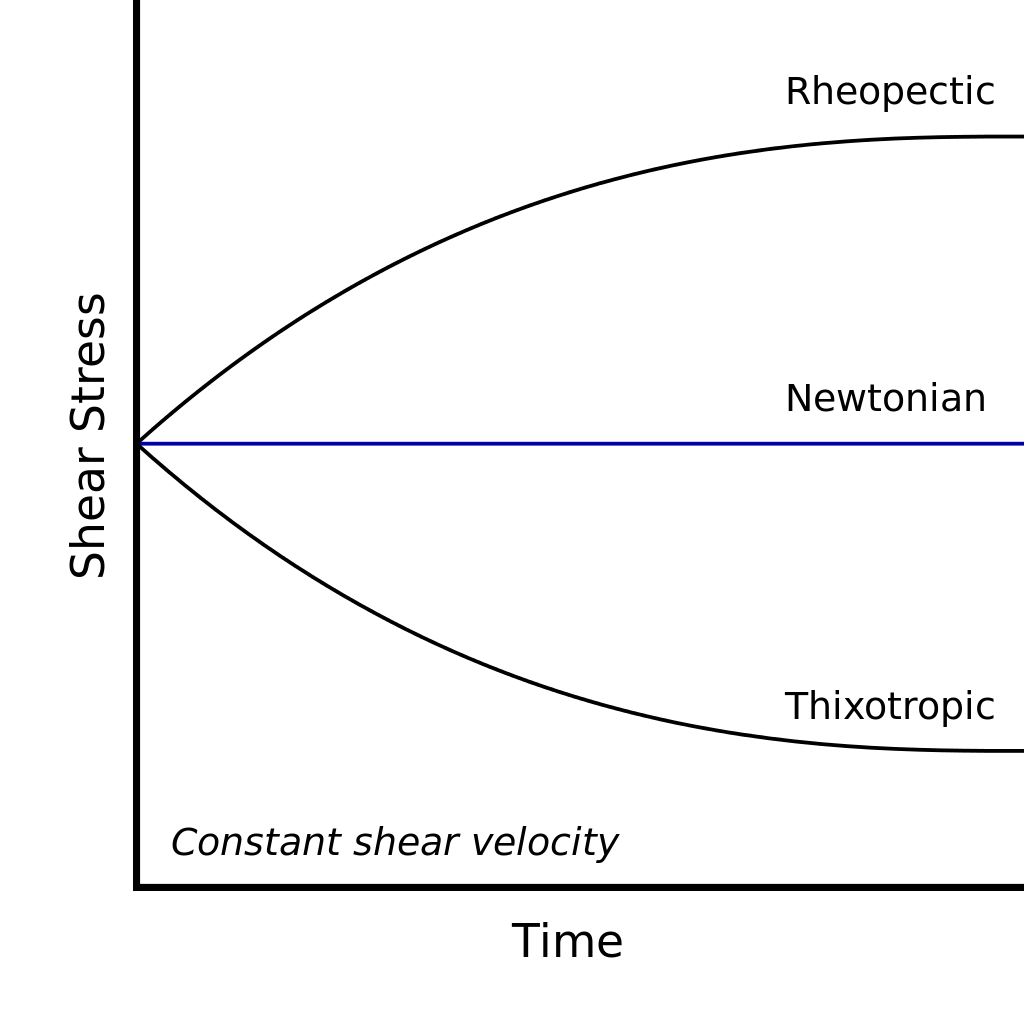 The graph shows the behavior of Rheopectic and Thixotropic fluids, and their comparison with Newtonian fluids. (Photo Credit : DirectEON /Creative commons)

A Recipe for Non-Newtonian Fluid

It’s always cool to gain knowledge about something interesting, but even cooler to put that knowledge into practical use. So let’s go ahead and try a recipe for Non-Newtonian fluid that we can easily make at home. Put on your gloves and lab coat!

CAUTION: No Expert Supervision is Required! 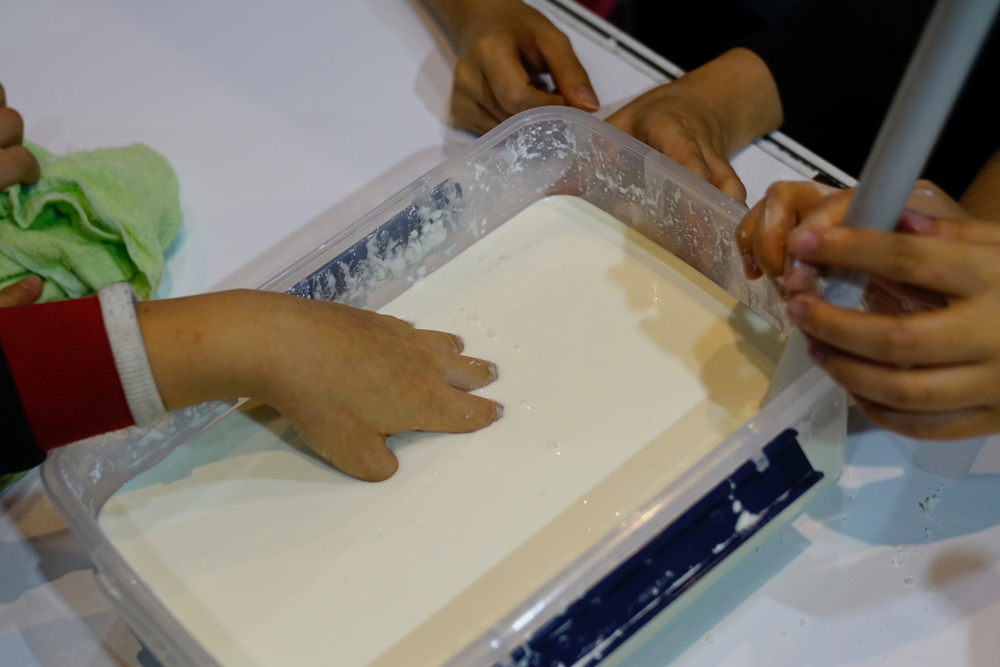 Place a clean bowl on a table in your backyard. Add 1/4 cup of corn starch into the bowl and a small amount of water to make it wet. Slowly stir the mixture. Continue to add more water until the consistency of the mixture turns to that of liquid upon slow stirring.

Now, to check if the recipe is ready, tap on the mixture. It should feel like a solid! If it’s too liquidy, add more corn starch. Once the mixture reaches the desired consistency, it’s time to show it off to your family and friends. Put on a magic show where you turn a liquid into a solid with just a touch!

The unique properties of Non-Newtonian fluids can be put to various uses. They have the potential to be used as aerospace propellants because of improved control and safety. They can also be used to make armored bodysuits and spacesuits that can resist puncture or impact.

The industrial sector is also well on its way to exploiting the benefits of Non-Newtonian fluids.

Clearly, Non-Newtonian fluids are not just a cool concept or a science class experiment; they will likely play an important role in humanity’s future! 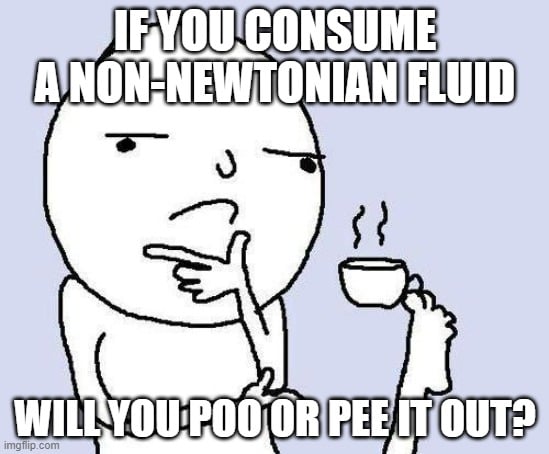 That’s a question to brainstorm on!