Nicotine is technically a stimulant substance, but some of nicotine’s other chemical effects in the body can mimic the sensation of a sedative, or have the same psychodynamic effects as a depressant.

After a long day of work, in the middle of a stressful commute, during a tipsy hang with friends, or following a large and luxurious meal, more than a billion people around the world regularly choose to enjoy a cigarette. There are countless reasons why smoking remains popular, despite the lethal long-term side effects of this addictive behavior, including the flexible nature of nicotine on the body.

Nicotine is the addictive heart of cigarette smoking, and has a number of desirable effects on the body. It can give us a burst of energy, increase concentration and memory skills, or help us get over social awkwardness at a party, but at other times, it can help to relax our mind and unwind after a stressful day. 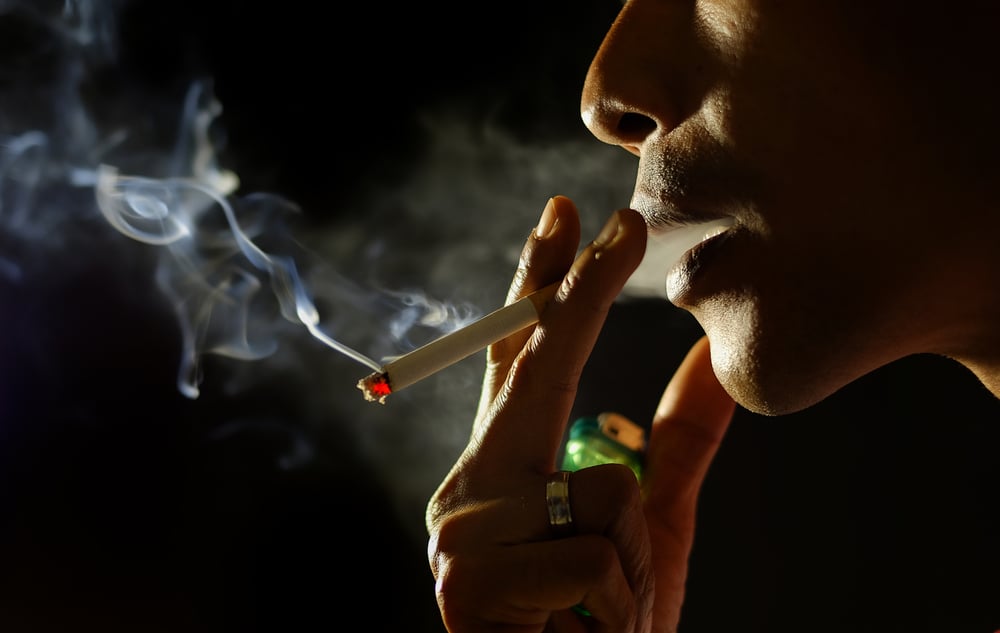 How can one chemical manage to act as both a stimulant and a sedative? (Photo Credit : nasruleffendy/Shutterstock)

Given the versatility of what nicotine (and thus cigarettes) can be used for, the addictive nature of this everyday drug becomes more obvious.

The question is… how can one chemical manage to act as both a stimulant and a sedative?

Nicotine makes up between 0.5%-3.0% of dry tobacco by weight, and is the component that makes smoking such a difficult habit to quit. Along with up to 4,000 other chemicals and additives in cigarettes, nicotine can be described as the “active ingredient”, as it closely mimics a common neurotransmitter in the brain—acetylcholine. Furthermore, it can cause the release of other neurotransmitters in the brain, including glutamate, dopamine, and endorphins.

When nicotine is introduced to the system, it begins to bind to acetylcholine receptors rapidly and in high numbers.

Basically, nicotine activates a large number of neurons at the same time, neurons that aren’t usually triggered en masse. Your brain essentially lights up with the subsequent release of acetylcholine, which triggers other cholinergic pathways in the brain. This boosts energy and activity levels, providing the sense of alertness that smoking a cigarette is associated with. Flooding your brain with neurotransmitter imposters will also trigger the release of dopamine, another neurotransmitter that is linked to feelings of pleasure and the reward center of our brain.

Smoking a cigarette and dousing your brain in nicotine also causes the release of glutamate, which is associated with learning and memory, and may help to strengthen cognitive associations of improved alertness with the act of smoking.

Also Read: Why Are Cigarettes So Addictive?

Furthermore, this results in the burst of concentration and focus that one feels after smoking a cigarette. Lastly, nicotine tells your brain to create and release more endorphins, which act as the body’s natural painkillers. These endorphins flood the body after nicotine is introduced, further solidifying the pleasurable act of smoking and the “importance” of nicotine in the body. Imagine having a flush of pleasurable endorphins and dopamine hit your system while smoking a cigarette after a very long day.

Both the physical and psychological impacts of nicotine can cause someone to become dependent or addicted to the source. This is why cigarettes are considered one of the most addictive drugs in the world, often compared to heroin in terms of how difficult it is for habitual users to quit.

Is Nicotine A Stimulant And A Sedative?

After reading the section above, you may be slightly confused by the effects of nicotine. It can provide a major burst of energy and focus, increase our memory, reduce anxiety and stress, and create associations of pleasure with smoking by releasing the same chemicals as heroin and cocaine. While nicotine does boast all of those qualities, some of them are pharmacologic and others are psychological or psychodynamic.

To be more specific, nicotine is technically a stimulant substance, with effects that can last in the body for 2-3 days. In other words, if you decide to quit smoking after a long period as a habitual smoker, the nicotine in your body will be eliminated within 72 hours. The alertness, the boosted memory, and the release of acetylcholine, endorphins and dopamine will have stopped affecting the body.

In other words, the stimulant aspects of the drug wear off, but cravings remain. Even after the active ingredient of cigarettes is eliminated from our body, we still have a psychological desire to smoke, and much of that is tied up in the perceived sedative effects of cigarettes. On top of all this, the symptoms of nicotine withdrawal can be brutal, affecting multiple organ systems, your mood, mental health and behavioral patterns, but they can easily be solved by lighting up another smoke. The immediate stimulant effect feels even better following an absence of the drug.

Granted, the release of dopamine and endorphins constitutes a relaxing experience, as they are pleasurable and make our bodies feel good, but what nicotine does particularly well is develop associations with different behaviors. After a ten-hour shift at a restaurant, the act of sitting down, lighting a cigarette, and receiving a burst of chemical rewards is something our minds begin to crave.

The social aspect of stepping outside a loud club to have a cigarette with friends, or strangers, is something lacking once the smoking habit is kicked. The sedative effects of cigarettes—the sense of grounding, the connection to relaxation, and the release of stress—are things that we psychologically crave and are often associated with the most “romantic” side of smoking. Those emotional associations with nicotine are powerful, and often more memorable than the physical effects of the drug itself.

Like many drugs, habitual users need more and more nicotine to achieve the same “high”, which is why smokers may start with 1-2 cigarettes a day, but after a handful of years, they may be up to smoking 1-2 packs a day. At a certain point, the stimulant effects will reach a limit, but the sedative or depressive effects can still be enjoyed/achieved.

This flexible appeal to different people seeking different forms of relief is what makes nicotine and cigarette smoking so dangerous, but from a scientific and medical standpoint, nicotine is a stimulant, not a depressant.

Also Read: Are There Any Safe Alternatives To Cigarettes?

Whether you smoke to perk up with your morning coffee or to wind down with an evening glass of wine, there is no denying that nicotine is a versatile and effective substance. However, while nicotine itself doesn’t cause cancer, the cigarettes that deliver nicotine for most users are packed with cancer-causing chemicals and other toxins that can affect your health in a variety of terrible ways.

Although it is technically a stimulant substance, nicotine can definitely bring you down! If you’re a smoker, there are many effective strategies to stop smoking, and it has never been easier to access a quitting support system through apps or other online communities.