Yes, coffee and tea addiction is real. Caffeine is a powerful tool that many people use for a kick-start of energy, typically in the form of coffee and tea. However, this sort of morning routine, despite being normalized all around the world, certainly has some similarities to an addiction. With 400 billion cups of coffee being consumed every year around the world, this is an important fact to be aware of.

When you open your tired eyes in the morning, ready to face yet another day, sometimes the only thing motivating you to kick off the covers is the promise of a delicious cup of coffee already brewing in the kitchen. Even the smell of coffee can put a bit of energy in our blood, and once that first, hot sip hits our lips, life doesn’t seem quite as impossible.

There is no denying that caffeine is a powerful tool that many people use for a kick-start of energy, typically in the form of coffee and tea. However, this sort of morning routine, despite being normalized all around the world, certainly has some similarities to an addiction. With 400 billion cups of coffee being consumed every year around the world, this is an important fact to be aware of. So, the big question is…. can we be addicted to coffee, tea, or other caffeinated beverages?

Short Answer: Absolutely, but not in the form that you might expect…

The Most Accepted Drug in the World

Many people become a bit uncomfortable when you tell them that they’re a drug addict, but when it comes to caffeine, there is no real way to deny it. Statistics show that between 70-80% of Americans consume caffeine every day, and you shouldn’t fool yourself, caffeine is definitely a psychoactive drug! While the first thing that many people think of in relation to caffeine is coffee, believe it or not, tea is actually the most popular beverage in the world besides water, and that also contains caffeine in many of its forms.

Now, when you have your first, second, or seventh cup of coffee/tea of the day, caffeine enters the stomach and is absorbed into the bloodstream. Now, caffeine is an interesting molecule because it is both water- and fat-soluble, meaning that it can pass through the blood-brain barrier and directly affect our brain, while also coursing through our veins, blood and cellular membranes. This is where the addictive nature of caffeine begins. 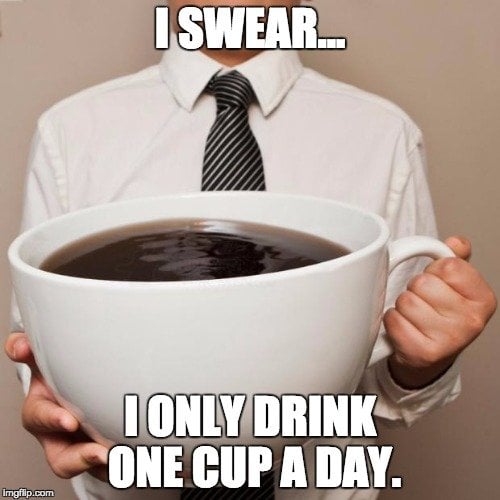 Caffeine closely resembles another molecule that is present in our brain, called adenosine, but they have very different functions. Adenosine fits into its appropriate receptor and creates a feeling of tiredness in the body, being a product of cellular respiration (the body doing work). However, caffeine is so structurally similar to adenosine that it can slide into those brain receptors, effectively blocking adenosine from attaching. For the next few hours, before the caffeine “wears off”, you will experience a sense of alertness and additional focus, but that isn’t where the story ends.

The body is chock full of natural stimulants, but they can be difficult to engage and control. However, when the adenosine receptors of the body are blocked by caffeine molecules, dopamine (pleasure and stimulation hormone) works more effectively, giving us an extra jolt of energy. Secondly, with so much excess adenosine in the bloodstream, not adhering to its receptors, the body is tricked into thinking there must be an excess of tiredness, so it releases adrenaline, yet another boost to our energy levels.

This combination of multiple stimulants in the body, facilitated by caffeine’s ideal structure, gives us an energetic push for a few hours, helping us finish the commute, get us through that boring meeting, or survive the endless days of child-rearing or manual labor. However, if you try and get this caffeinated monkey off your back, you’ll begin to see just why caffeine is such a real thing.

The Trouble With Constant Caffeine

We might drink coffee and tea without any consideration of its long-term effects on our body, because most people experience a daily dose, a gradual wind-down, and no major side effects that raise any questions. However, if a three-cup-a-day drinker suddenly decides to cut out the caffeine, it will take less than a day for the withdrawal symptoms to appear. You will feel mentally foggy, a bit less alert than you’d like to be, and your muscles may even be a bit sore. The headache is probably the most annoying part of the withdrawal, but some people also experience nausea and stomach issues. 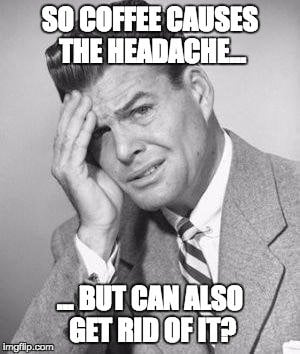 The reason for this backlash of caffeine is that your brain chemistry actually changes after extended exposure to caffeine. Like so many other drugs, your body will become used to having this chemical present, and will learn to adapt. In the case of caffeine, the body will develop more adenosine receptors, meaning that it will take increasingly large and consistent amounts of caffeine to effectively block them and create that energetic boost in your body. Just as with another drug, you are constantly chasing a “high” of the first time, the same thing is true (albeit on a smaller scale) with caffeine.

Our body like regularity, and gradual changes, so when caffeine is suddenly eliminated from the daily routine, chaos reigns, as there are far too many adenosine receptors and too few norepinephrine receptors. A body chemistry rollback occurs, returning to the normal balance of receptors, and this is where the caffeine withdrawal side effects come in. In the two weeks after eliminating caffeine, the body will make these changes, and you can go back to normal. In the case of other drugs, the withdrawal symptoms can be far more vicious, and even fatal in some cases, but caffeine doesn’t have as powerful an effect on the body as those “harder” drugs.

So, while the idea of being hooked on caffeine may seem like an exaggeration by someone condescendingly sipping their veggie protein smoothie every morning in the office, looking bright-eyed and bushy-tailed, it’s actually true. However, given the dependence on that energy boost that billions of people have come to rely on throughout the world, widespread addiction to tea and coffee is likely to be a part of society for many years to come.

Just remember that coffee is highly acidic, and permanently changing brain chemistry can be dangerous, so try to be moderate in terms of your intake. Ulcers, stained teeth, irritability, heart issues and other serious health factors can be affected by long-term use of caffeinated beverages, so be careful and, maybe…. just try to get a bit more sleep at night!