Medicines are chemicals. When you swallow a pill, the digestive system will absorb the chemicals in the medicine into bloodstream. From the blood stream it will go through the liver and then it can affect the intended organ.

Got a headache? Pop an Advil and voila! Just like that, the headache will be gone. Suffering from gas? No need to fear, Tums is here!

That’s basically the magic of modern medicine—something to fix everything—but have you ever wondered how the aspirin knows that you have a headache and not say, muscle pain or something else? Spoiler alert: it doesn’t!

Though it may seem like our pills zero in on our pain and cure it with rapid efficiency, in reality, they’re not nearly that advanced. These pills or drugs have no idea where to go after you take them.

Why Is Blood Drawn From Veins And Not From Arteries?

What Route Do Pills Take In The Body?

Medicines in the form of tablets, pills or liquids begin their journey by being swallowed. They then travel through the gut, where they get broken down and absorbed into the bloodstream. A special ‘highway’ called the hepatic portal vein brings the contents from the small intestine to the liver through the blood.

In the liver, the pill is further broken down into its drug components and released back into the bloodstream. Since all organs and tissues of the body are supplied with blood, the drug goes everywhere, but this doesn’t mean that it will act everywhere. 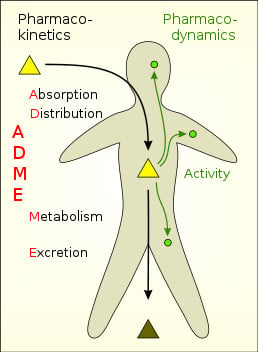 The journey of a drug (Photo Credit : Mike Scivit/Wikimedia Commons)

Medicines are essentially chemicals. These chemicals are designed in such a way that they only attach to certain protein molecules in the body, known as receptors. There are many different types of receptors that may be present on the cell surface, or even inside the cell. Each receptor type has a distinct shape; you can think of them as locks, with each lock type having a unique key.

In this case, the medicine is the key. The medicine travels throughout the body and binds to the lock (receptor) if it fits.

For example, Advil contains ibuprofen, which is a pain medication. The ibuprofen will latch onto any pain receptors that it comes across as it flows by. Only after it binds to this target can the drug perform its job.

The ibuprofen enters the cell and kickstarts chemical reactions that ultimately bring about the desired effect. It blocks the pain signal from reaching the nerves, in the case of pain medication.

In the case of beta-blockers (drugs used to control high blood pressure), they latch onto the beta receptor (located in the cells of the heart, blood vessels and lungs) and block adrenaline from binding to the same receptor. This prevents adrenaline from acting on the cardiac cell and raising blood pressure, as shown below. None of this could have happened without the drug binding to its target receptor. However, this natural system is not foolproof.

Sometimes, drugs may bind to receptors other than the target receptor, especially if the two are similarly shaped. This is like when you wave at someone from afar, thinking it’s your friend, only to get closer and find out that it’s a complete stranger.

Unfortunately, in this case, the wave acts more like a handshake, as the drug binds to the wrong target and sets off a chain reaction, resulting in unwanted side effects.

What Happens In Case Of Side Effects?


Drugs are meant to be taken at a certain dosage. If taken in lower quantities than this optimum dosage, it may fail to bind to the target receptor. In such a case, the medicine will be completely useless, as the drug cannot perform its function.

In contrast, when medicines are taken in higher quantities than their prescribed dosage, they are more likely to bind to more than just the target receptors, causing unexpected reactions known as side effects.

Every medication has a known list of common side effects, such as stomach upset, drowsiness, dry mouth, etc., all of which are mentioned on the label. Only in severe cases do these side effects result in hospitalization.

Hence, administering the correct dosage of a drug is very important for its efficacy. Administering drugs locally can decrease the chances of side effects. For example, an antibacterial skin cream can be used to treat a skin infection topically. However, this specificity is not a feasible solution for all diseases and infections.

Researchers are working on developing ‘smart drugs’, which are like GPS-enabled cars that travel to a desired target location without fail.

In other cases, drugs can remain inactive near the target location until it is time to activate them. Since drugs are usually excreted from the system after they detach from the target receptor, they need to be taken regularly. However, by being able to control drug activation, we can maintain a drug at the desired dosage level in the body, thus avoiding the need for frequent administration.

In one study, researchers detected chemical signals in the body that initiate drug release, giving rise to a completely automated drug delivery system that delivers the right dose, at the right time, anywhere in the body, with specificity and efficiency.

Another study looked at microchips placed under the skin, spinal cord or in the brain to precisely deliver a drug. The microchips have tiny wells loaded with a drug, such as chemotherapy or pain medication, and then covered with gold foil caps. The drug is released upon applying an electric current of one volt that dissolves the caps and releases the drug into the system.

Microneedles are another invention utilizing dozens of microscopic needles to locally administer a drug. The needles are so fine that they don’t reach the nerves, thereby facilitating painless drug delivery. With several studies of this type currently in the works, it won’t be long before our drugs stop their aimless meandering through our bloodstream. The only big question is whether we can make these ‘smart’ drugs as affordable as the ‘dumb’ ones!