You may already know that it’s pretty difficult to look directly up at the sun at noon. It’s not only immediately discomforting, but can also have long-term or permanent adverse effects on your eyes. In fact, that’s why scientists and stargazers strongly advise you to avoid watching a solar eclipse without protective glasses. Basically, harmful ultraviolet rays from the sun can damage your eyes if you look at the sun directly. But what about the times when you look at the sun, but with your peripheral vision, or in other words, from the corners of your eyes? We don’t usually hear about people getting eye problems by looking at the sun sideways, right? Why is that?

Why does having the sun visible in your peripheral vision not do any damage to your vision?

How are eyes affected when you look at the sun directly?

When one stares at the sun for too long, it can result in too much ultraviolet light flooding the retina, causing solar retinopathy. In the worst cases, this can cause permanent blindness (although that’s rare), but looking directly at the sun is so painful that it’s usually impossible for anyone to stare at the sun for that long. Typical damage to the eyes after staring directly at the sun include dark or yellow spots, dimmed or blurred vision, and loss of vision in the center of the eye (the fovea), among others. 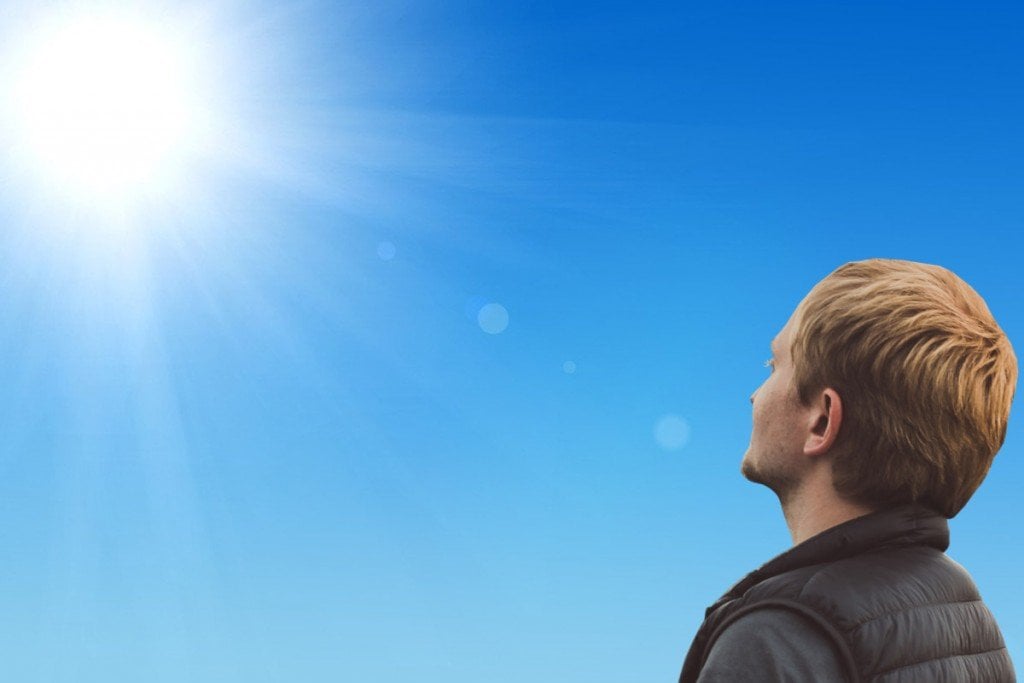 Looking up at the noon sun is one of the most dangerous things you can do to your eyes. (Photo Credit : (Pixabay)

Now, let’s try to understand the specifics of this issue – there is a lens in the front of the eye, whose primary job is to focus incoming light onto the macula – an oval-shaped pigmented area near the center of the retina. It has the highest concentration of nerves and the thinnest protective layers.

The pupil is directly in front of the eye; so, when you look at the sun directly, the lens focuses the light right on the retina, which can result in damage. 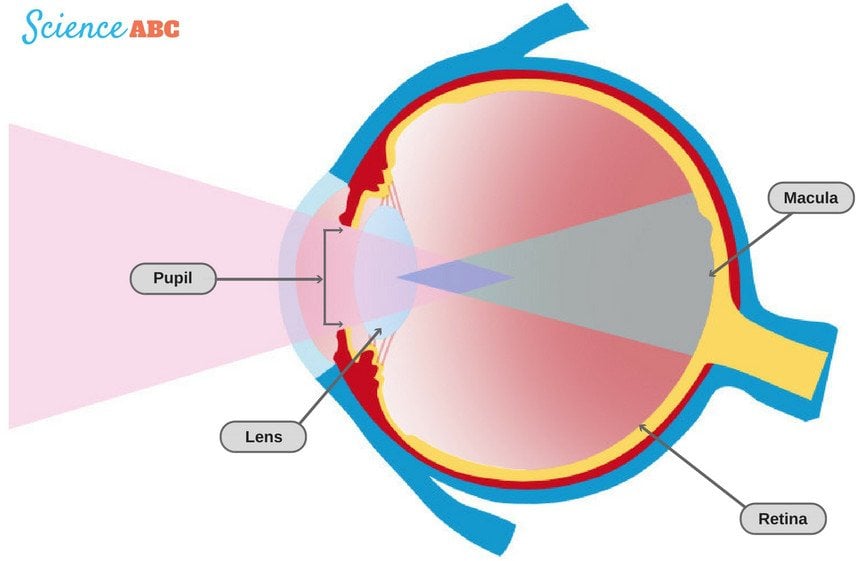 Why does nothing happen to your peripheral vision?

Actually, it’s pretty similar to burning a piece of paper through a magnifying lens. If you’ve ever tried this experiment, you know that you can burn a hole through paper only when you hold the magnifying lens at a certain angle so that the sunlight focuses sharply at a single point on the paper. 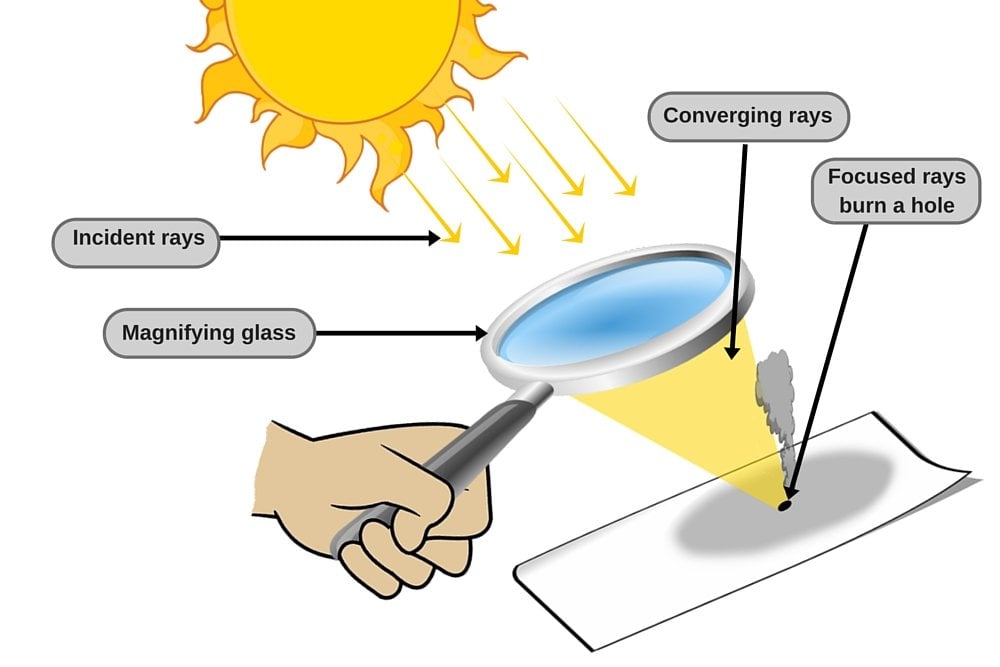 You have to hold the lens at a certain angle for this experiment to work.

If you hold the magnifying glass at the wrong angle, nothing happens. This is because the sunlight is not focused into a death ray, and is simply passing through the glass normally without being focused on a single point.

The same thing happens with your vision. When you’re looking directly at the sun, the eye lens focuses the sunlight and the most intense light falls directly on your retina, potentially causing damage. However, when you’re not looking at the sun directly, but rather through your peripheral vision, less light gets into your pupil and subsequently onto your retina. That’s why the sun doesn’t dazzle or cause discomfort when it’s firmly in your peripheral vision.

Simply put, the further a source of light is from the center of your field of vision, the less light gets into your eyes, which lessens your risk of damage. 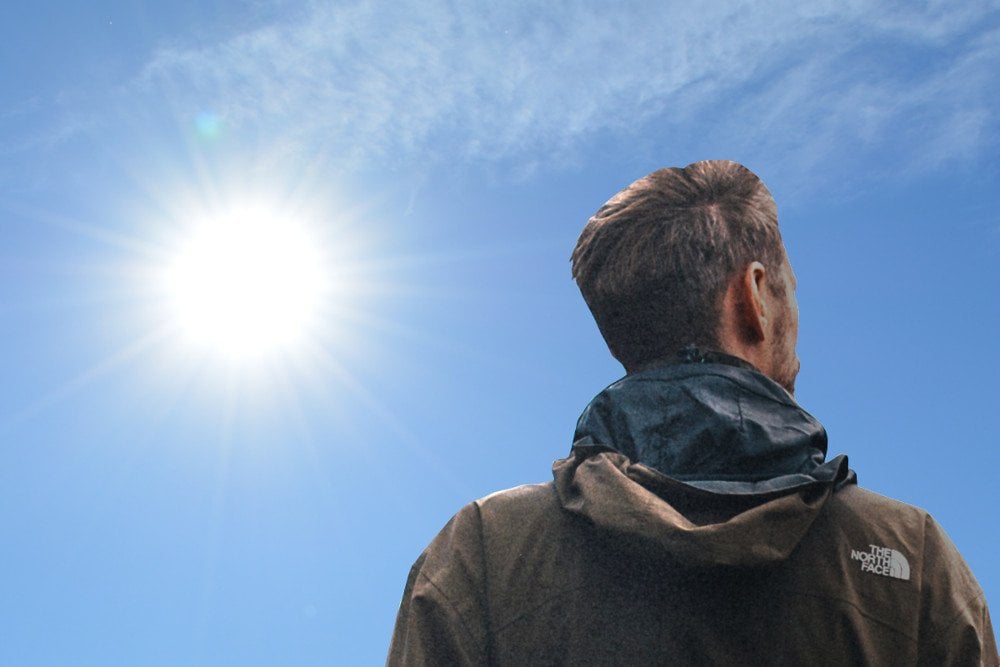 Sunlight doesn’t harm your eyes when the sun is in your peripheral vision. (Photo Credit : Pixabay)

That said, if you stand at any place in the sun, with your eyes locked in one position for too long, it can potentially cause problems, even when the sun is in your peripheral vision. However, that doesn’t usually happen, since our eyes are constantly darting around, especially when we’re outside and there’s so much to look at!