Yes, mosquitoes bite animals; although different types of mosquitoes tend to prefer different animals, and these feeding patterns depend on many other factors.

Yes, mosquitoes bite animals; although different types of mosquitoes tend to prefer different animals, and these feeding patterns depend on many other factors.

When summer rolls around, everyone loves soaking up the sun and showing some skin, but this is also one of the prime times for the world’s deadliest creature to come out and play. Yes, mosquitoes are the bane of existences all over the world, leaving itchy red welts, buzzing in your ears, and even spreading diseases that can kill millions. Human beings complain about mosquito bites constantly, but if animals could talk, would they have similar gripes? Do animals get mosquito bites just like humans?

Why Do Mosquitoes Bite?

While it may seem like mosquitoes are simply cruel creatures who enjoy torturing humans in the summer months, their incessant biting does serve an important purpose in their life cycle, and we are technically a part of the food chain. Mosquitoes, both male and female, require sugar to stay alive, like many other insects, so they feed on the nectar of flowering plants.

However, once females reach adulthood and are able to lay eggs, their nutritional needs change. The sugary nectar is no longer enough; adult female mosquitoes require lipids and proteins in their diet, which is readily accessible through blood. For this reason, only female mosquitoes bite humans and other animals; males are happy with their nectar.

This brings up an interesting question… since other animals are probably much less likely to swipe and kill mosquitoes, why does it seem like they enjoy feasting on humans so readily? Don’t other animals have a healthy blood supply? Or are mosquitoes like tiny zombies?

Well, if you believe that mosquitoes unfairly target human beings for their bloody meal, you’d be right. When humans enter the habitat of a mosquito, they immediately become the most attractive meal in sight. Mosquitoes are incredibly sensitive to various signals, such as movement, CO2 emissions and odors from animal bodies. When it comes to human beings, they are a large, mobile target that exhales a lot of CO2, exudes a lot of heat, and is not naturally camouflaged or adapted to prevent bites.

Mosquito females can sense a human being’s exhalation from up to 50 meters away, and will make a beeline for your skin. The various other body odors and chemicals that the body exudes are also very appealing to most mosquitoes, making you an even more attractive target.

What Animals Get Mosquito Bites?

Mosquitoes are known as opportunistic feeders, meaning that they will eat whatever they need to survive. If humans are in short supply, mosquitoes commonly feed on wild birds, which is where so many of our cross-species disease fears originate from. When a mosquito bites an infected bird, and then bites a human, it is possible to spread certain avian pathogens. Some mosquitoes exclusively feed on birds, ignoring humans altogether, while most will eat whatever is available.

Some of the other most popular dining options for mosquitoes include amphibians, snakes, reptiles, squirrels, rabbits and other small mammals. More and more research has been poured into understanding mosquitoes and their feeding patterns, as the number of mosquito-borne illnesses seem to be increasing in number and severity. Mosquitoes have the unenviable title of world’s biggest killer, and it is believed that every year, 1 million people die as a result of mosquito-borne diseases.

Mosquitoes also target larger animals, such as horses, cows and primates, as well as kangaroos and wallabies, as recent research into certain viral infections in Australia have proved. The news that mosquitoes don’t solely target human beings probably sounds great, particularly to those people who seem to be mosquito magnets. However, the fact that mosquitoes are equal opportunity biters, despite a general preference for human beings, is what makes these small, irritating insects so dangerous.

As mentioned, some of the world’s deadliest diseases are spread through the bites of mosquitoes. Depending on where you live, the risk may be higher or lower, but some of these diseases exist in any climate, and can be carried by multiple types of mosquitoes. La Cross Encephalitis, Jamestown Canyon Virus and West Nile Virus are some of the more common diseases found in the United States, but there are numerous other forms of encephalitis that can be spread in this way. Some of these diseases are believed to be passed between humans, birds and horses via mosquito bites.

Some of the more well known diseases caused by mosquito bites are also connected to cross-species feeding, or from biting one infected human and then passing it on. These deadly diseases, which are particularly devastating in tropical and impoverished areas, include malaria, yellow fever, dengue fever, the Zika Virus and chikungunya, among many others. The vectoring for certain diseases are still unknown, and new breakouts happen all the time. Fortunately, there are massive efforts around the world to find a solution to this mosquito problem, but their rapid reproduction rate, flexible diet, and resilience make it impossible to “eliminate” them entirely. 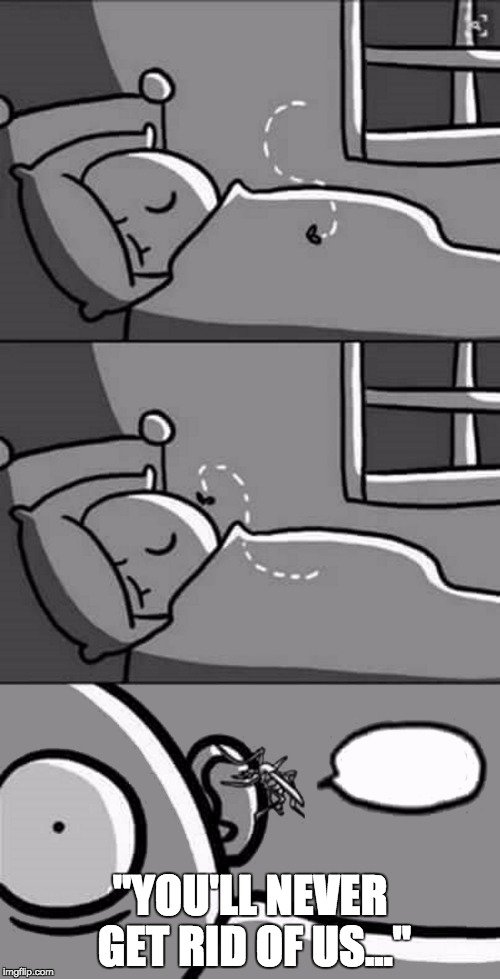 Also, human beings aren’t in the business of intentionally wiping out entire species (there are roughly 3,500 species of mosquitoes, by the way, and most of them don’t bother humans at all). It would not only be extremely impractical and costly, but would likely do huge amounts of damage to the environment, and disrupt countless food chains where mosquitoes are a prime source of food.

Basically, mosquitoes aren’t going anywhere, and they are always going to need bloody meals, whether it comes from you or another animal. Just take the necessary precautions, stay alert, and do your best not to get bit!

How well do you understand the mosquito’s behavior of biting?