The variables of gasoline vapor, airflow, temperature of the cigarette are all difficult to calculate, but the probability is extremely low that you will go up in flames because you tossed a cigarette butt in a pool of gasoline.

We’ve all seen it done a thousand times… a good (or bad) guy in a movie casually flicks his cigarette through the air, the slow-motion sequence begins, and we see that sparking tip ignite a waiting trail of gasoline, usually leading to a tanker or conveniently placed box of ACME explosives. The cigarette instantly ignites the gasoline, flames race along the surface, and the payoff explosion is as glorious as we’d hope for.

It’s pretty incredible in the movies, but the question is, can it happen in real life?

In short… not really, unless the conditions are absolutely perfect. But maybe we should take a closer look…

Again, the answer to this should be quite simple, a yes or no answer, but in reality, the answer is slightly more complex. Cigarettes tend to burn at approximately 800-1100 degrees Fahrenheit (source), and can get even hotter during a particularly long drag. Essentially, you are providing more and more oxygen for the fire to burn faster and hotter, thus eating up the tobacco and releasing smoke into your lungs. Now, the ignition temperature of gasoline is much lower than that, roughly 495 degrees Fahrenheit (source).

On paper, this means that the gasoline should ignite quite quickly and an explosion is imminent. However, researchers have proven that this is highly unlikely. When a cigarette is not being “dragged”, the temperature drops considerably, making it harder to ignite. Furthermore, gasoline is dangerous due to the flammability of the fumes, not the liquid itself. When gasoline goes up in flames, the fumes from the liquid are the main burning agent. When the liquid isn’t in a contained space, like the open air of a gas station, it would be nearly impossible for the lit cigarette to ignite those fumes.

The variables of gasoline vapor, airflow, temperature of the cigarette are all difficult to calculate, but the probability is extremely low that you will go up in flames because you tossed a cigarette butt in a pool of gasoline. One particular study attempted over 2,000 different scenarios and situations where gasoline and a lit cigarette could interact, and not a single attempt resulted in the gasoline catching on fire.

Some predictions were suggested as to why they couldn’t get the gasoline to light, including the rapid formation of ash on the cigarette, which may have prevented ignition. Also, researchers speculated that the petrol vapor naturally convected away from the lit area, making it impossible to light. Whatever the reason, it doesn’t sound like the sort of lab I’d want to work in!

If cigarettes are relatively safe, what about lighters?

Interestingly enough, the sparking mechanism in a lighter has been shown to be more receptive to gasoline fumes than a lit cigarette. In other words, you would be much safer walking into a gas station with a lit cigarette, rather than lighting one once you’ve already walked through a few gasoline puddles.

While the probability of your imminent gasoline demise are very small, it’s better to simply avoid these types of situations whenever possible, unless you’re the cool guy from the movie who flicks a cigarette and turns his back on the explosion. 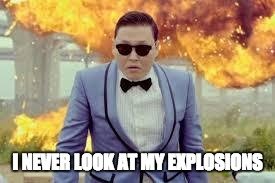 Do you know whether a cigarette can ignite a puddle of gasoline?