The first world war included a dramatic series of events where chemicals were being used for both offensive and defensive purposes.

It was the summer of 1915, and the Allied Troops in Ypres, Belgium were enjoying the warm golden light before the setting sun and enjoying the northeast wind. Suddenly, they heard artillery being fired their way. The soldiers got ready to defend themselves, but then something unforeseen happened.

The air in their surroundings suddenly filled with a dense yellow-green fog. The soldiers expected German troops to storm into the area, yet the only thing that rushed in was more of the strong and pungent gas. The sound of loud explosions was replaced by an eerie silence and the French trenches were engulfed in a bright poisonous cloud. 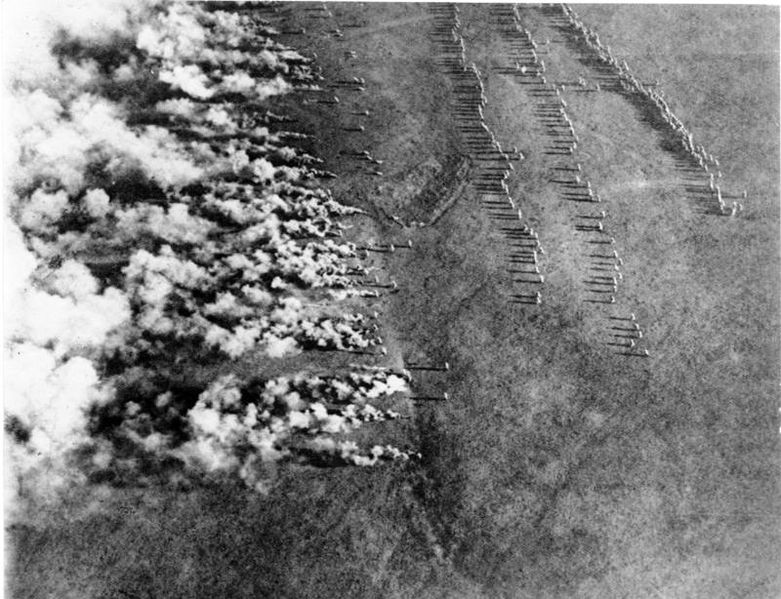 The day described above was April 22, 1915. It changed the way “The Great War” or “World War I” was fought. It also earned the conflict a new sobriquet—“The Chemist’s War”. We shall now take a look at the good, the bad, and the ugly use of chemicals during the first world war—and beyond.

The Beginning Of Chemical Warfare

The use of poison during war was taboo and those using it were considered to be “unworthy of being a soldier”. Many international treaties, such as the Brussels Declaration and the Hague Convention echoed this sentiment. There was a ban on the use of poison, poisoned weapons, or projectiles whose sole purpose was to deliver poisonous gases during battle.

However, the German High Command bent the interpretation of the rules according to their needs. They found loopholes that would allow them to use lung irritants like tear gas, which they considered to be just “smoke” on their opponents. Their first two attempts at chemical warfare didn’t work. In the first attempt, the irritant chemicals loaded into the artillery shells burnt off before they reached the British soldiers. The second time, the chemicals didn’t release into the air due to subfreezing temperature conditions.

The Germans upped their game at the Second Battle of Ypres. The troops planted cylinders of gas with valves facing towards their enemies and waited for the direction of the wind to change. As soon as it started blowing away from them 5,730 pressurized cylinders of poisonous yellow-green gas were unleashed upon their enemies. The use of these unexpected warfare tactics by the central powers left the Allied forces clueless. To fight back and defend themselves, they first had to identify what was being used against them.

Chemists were called on-site to detect the composition of the gas. Since gases don’t stay in a place for long, the only physical evidence for scientists to test was the greenish-black tarnish left behind on the silver buttons, buckles, and badges of French, British and Canadian soldiers. The tarnish confirmed that the troops had been attacked by — Chlorine gas (Cl2). 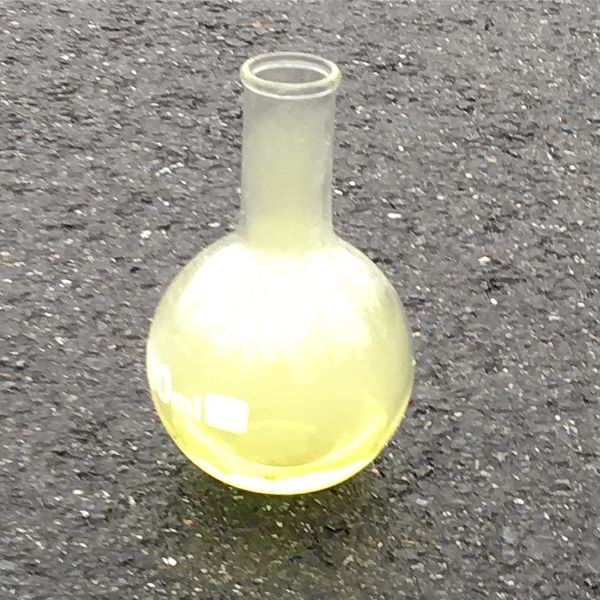 In September of the same year, the British army retaliated by releasing 140 tons of Cl2 on their enemies. The wind wasn’t in their favor, so to control their release, they used crude mortars to deploy canisters of the gas at the German troops.

The Germans then began using phosgene gas, which was much more potent than chlorine. The chemists in the Allied Forces quickly figured out what the gas was and developed new techniques to protect their soldiers against such attacks.

Then at last came the most notorious of all chemical weapons of mass destruction: Mustard Gas (C4H8Cl2S), also known as Sulphur-mustard. This wasn’t gas, but rather an oily substance that could easily circumvent most of the protective gear used by the soldiers. The oil and its vapors not only attacked areas of skin that were exposed, but also penetrated gas masks, clothing, and leather boots. The attack left soldiers with severe blisters and intense pain.

In 1917, the US joined the Allied Forces and entered the war. They set up the first gas regiment with the help of American University and came up with a new weapon called Adamsite. The gas could easily surpass the gas mask and induce eye irritation and nausea, forcing the German soldiers to take off their masks and be exposed to the phosgene and chlorine gas being deployed.

With the German forces surrendering in November 1918, World War 1 and the horrifying era of chemical warfare came to an end.

Most of the poison gases that were used by the Germans were supplied by a corporal Fritz Haber. He was a renowned chemist whose contribution to the world is more like a paradox. A scientist whose inventions killed thousands of people, but saved millions from starving?

Also Read: What Is Mustard Gas?

By the late 19th century, European scientists had figured out that the soil would become infertile in the years to come due to the over-cultivation of crops. The natural process of nutrient enrichment was slow, so they started using fertilizers to replenish the soil with the three most important nutrients: Potassium (K), Phosphorous (P), and Nitrogen (N). Minerals such as phosphate rocks and potash provided enough supply of P and K, but an abundant source of N was nowhere to be found.

For a long time, Europe used “guano” or bird droppings as nitrogen fertilizer, which they had to import from other countries. The major source of N for the world was Chile Salt Petre or Sodium Nitrate. 78% of our air is N, but no one knew how to harness it. The scientists were scared that if a sustainable source of N was not found, it might lead to population starvation.

In 1904, Fritz Haber took interest in this problem and began looking for ways to replicate the nitrogen fixation process in nature, but ultimately failed. He then came across Carl von Linde’s air liquefaction process.

Haber liquified air and then separated oxygen and nitrogen via distillation. He then combined compressed hydrogen and nitrogen gas, which gave rise to ammonia. This gas was highly soluble in water and could be sprayed in the soil as a rich source of N. Ammonia could also be converted into a solid form by reacting it with nitric acid and forming ammonium nitrate.

Haber perfected the industrial version of ammonia production under Karl Bosch. The Haber-Bosch process was later patented and sold to industries. World War 1 would have been much shorter without the Haber process, but it helped feed the entire world. Ammonia synthesis expedited the Green Revolution and is responsible for the existence of 2/3 of today’s food production. He received a Nobel Prize in 1918 for his contributions to agriculture, which remains one of the most controversial wins in history.

The repercussions of Haber’s chemical warfare ideas didn’t stop with WWI. One of the gas attacks injured an Austrian soldier and forced him to leave the military and join politics. Any guesses on who that person might be? Yes, it was Adolf Hitler.

After looking at the bad and the ugly, let’s look at some good chemistry that came out of this period.

The term Chemist’s War doesn’t end with the use of chemicals to injure people, but also commemorates the way scientists fought back to protect their people. The first version of a gas mask was invented during this period. To neutralize the effects of chlorine gas, flannel masks soaked in alkaline sodium thiosulphate (Hypo) were used. Hypo converts free Chlorine gas into safer compounds. As the chemical weapons grew more complex, scientists developed boxed gas respirators with a face mask connected to a canister. The respirator contained chemicals that removed chlorine and phosphine and passed through cleaner air for the soldiers to breathe. 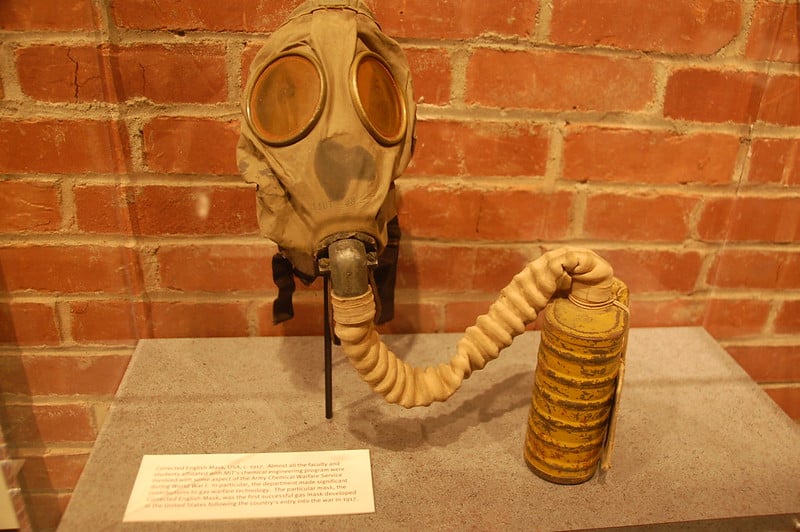 Chemicals were also being used to treat the wounded and provide them with sanitary health care. Bleaching powder (Ca (OCl)2­) was used to sanitize hospitals and trenches, Carbolic acid and tincture of iodine were used as antiseptic on wounds. New disinfectants, such as Eusol and Dakin’s solution, were created for cleaning the hospitals. Anesthetics were developed to reduce the pain of soldiers during amputations.

Chemists came up with the first artificial detergent, the formula to create synthetic rubber, and new antioxidants for the preservation of food. Scientists also perfected radiography or the use of X-rays to detect fractures, shrapnel, and bullets in soldiers. Pre-war scans required hours of exposure to X-rays, but by the end of the war, timing came down to a fraction of a second.

The era of chemical warfare also opened the doors to new cancer treatment pharmacology. Scientists observed that soldiers exposed to mustard gas had lower levels of white blood cells in their bodies. This inspired scientists to develop mustard gas derivative cytotoxic chemicals that could be used to stop the rapid increase of WBC in Leukemia and bone cells in bone cancer.

Most of the chemicals that were ultimately militarized were invented way ahead of the war. TNT, initially developed to be used as a dye, was widely used as an explosive in the war. Petroleum jelly was a skincare product and industrial lubricant before it was used to make cordite propellants. 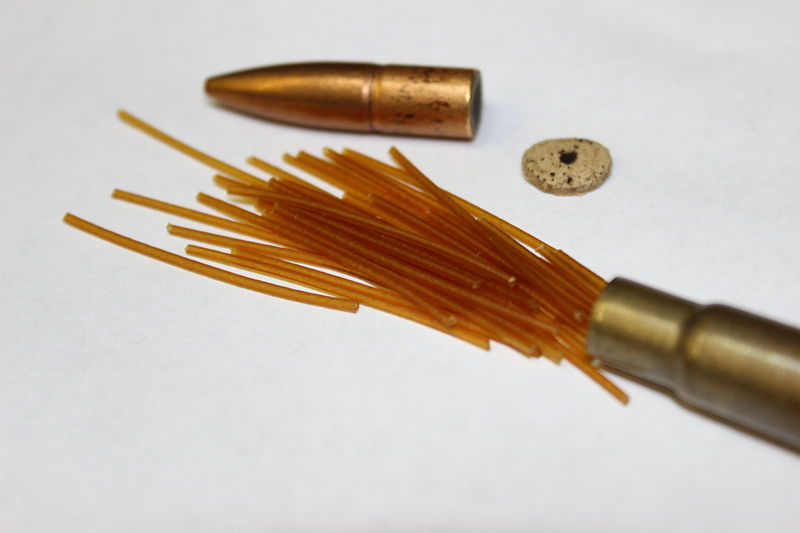 Cordites were used as propellants during the great war instead of gunpowder to reduce smoke emission. (Photo Credit : Forrest H. Barfiel/Wikimedia commons)

Chemistry doesn’t fuel a war; the chemists or authorities who choose to misuse its potential do. Chlorine that was used as a weapon also founds its use in water purification, which prevented the spread of many water-borne diseases. The ammonium nitrate used to create explosions can also be used to nurture food crops. Nuclear material used in atomic warheads can also be used to power millions of homes with clean energy. History has shown that chemicals can both hurt and heal; it’s up to us how we choose to use them!