The Grim Reaper is the personification of Death itself, and the history of this imagery dates back centuries. Although the image has changed slightly over the centuries, the Grim Reaper is almost always shown in a large black cloak, a skeletal face and hands, glowing eyes, and a scythe – the long stick with a curved blade on the top.

The Grim Reaper is the personification of Death itself, and the history of this imagery dates back centuries. Although the image has changed slightly over the centuries, the Grim Reaper is almost always shown in a large black cloak, a skeletal face and hands, glowing eyes, and a scythe – the long stick with a curved blade on the top.

Imagine walking down a dark country road as the fog rolls in, and just out of sight is a shadowy, cloaked figure who appears to be holding something… a walking stick, perhaps, or maybe…. a scythe? At that point, if you haven’t already turned and run away screaming, it might be too late. Pinch yourself to wake up, if you can, because that ominous figure in the distance sounds a lot like the Grim Reaper.

That name may send a shiver down your spine, but what does it really mean? What is the significance of the Grim Reaper, and where did it come from? 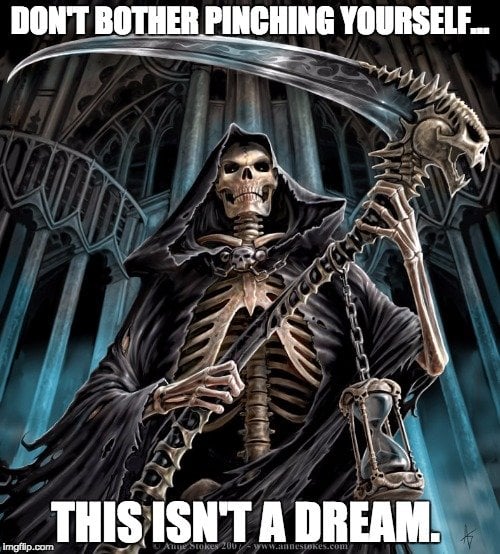 Where Did The Grim Reaper Come From?

Although the personification of death stretches back thousands of years, to ancient Egypt, Norse mythology and beyond, the actual image of the Grim Reaper comes from one of the darkest periods in human history – the Black Death. In the 14th century, the Plague ravaged the world, killing at least 25 million people, although some estimates put that total closer to 75 million people. In total, this plague wiped out between 30-60% of Europe’s population, and decimated the global population by at least 10%.

In this horrible period in history, death was everywhere, with piles of bodies in city centers, stacked and skeletal, like something out of a terrifying movie. Over the course of the 14th century, there were many small outbreaks and flare-ups of the plague throughout the world, leading to a nearly constant fear of death. People felt like Death was literally walking amongst them, so the personification of Death was inevitable. 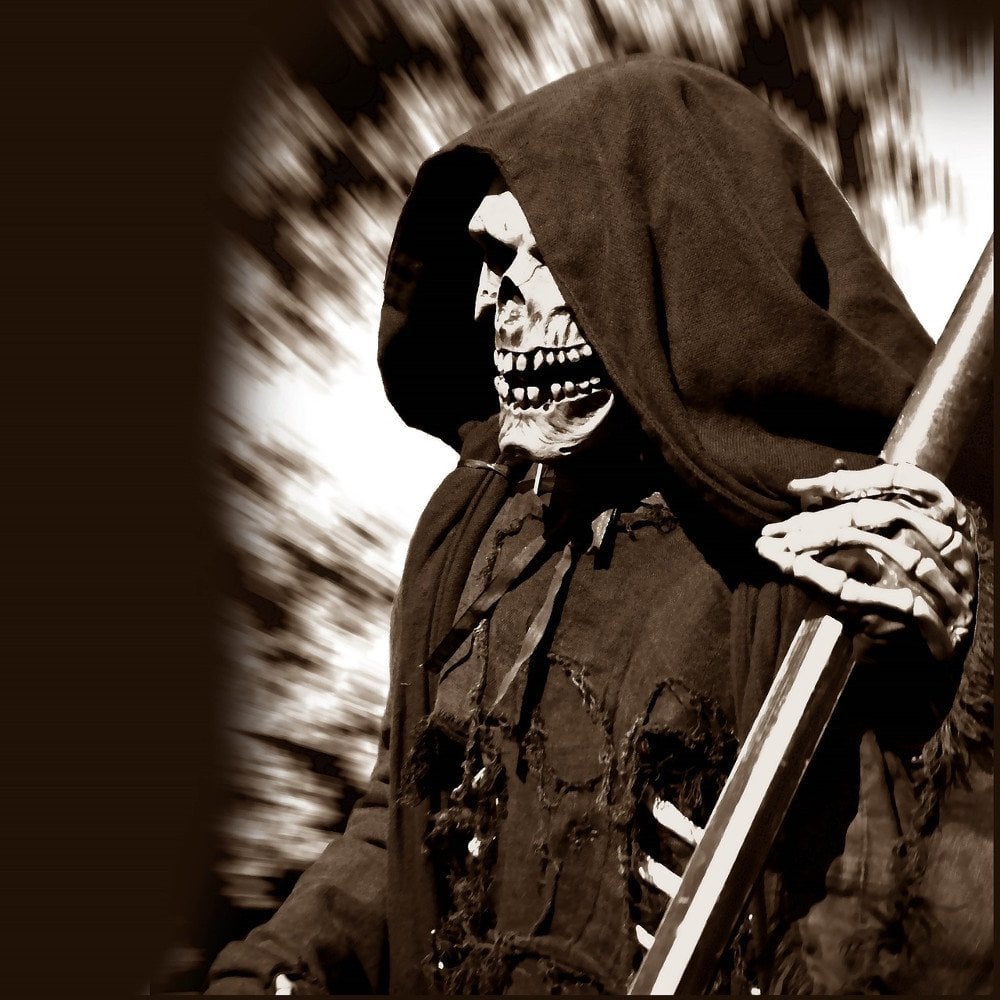 Although the image has changed slightly over the centuries, the Grim Reaper is almost always shown in a large black cloak, a skeletal face and hands, glowing eyes, and a scythe – the long stick with a curved blade on the top. Each part of this iconic outfit means something, and has become symbolic for various things over the years. The black cloak, for instance, allows Death to hide in the shadows, menacing people beyond their sight. The skeletal hands and face, as well as the glowing red eyes, suggest that this monster has not only been to the fiery depths of Hell, but has come back to take others with him.

At times, he is also shown holding an hourglass, waiting for the grains of sand to run out on a person’s life before he brings down his blade to snuff out their life.

Also Read: What Are Some Superstitions Involving Animals?

That blade – the scythe – is perhaps the most iconic aspect of the image. A scythe is actually an agricultural tool that is used to reap grain by cutting down large swaths with a single sweep of the blade. Similarly, when Death walks among the living – as in the Black Death – he similarly cuts down human life as easily as wheat. 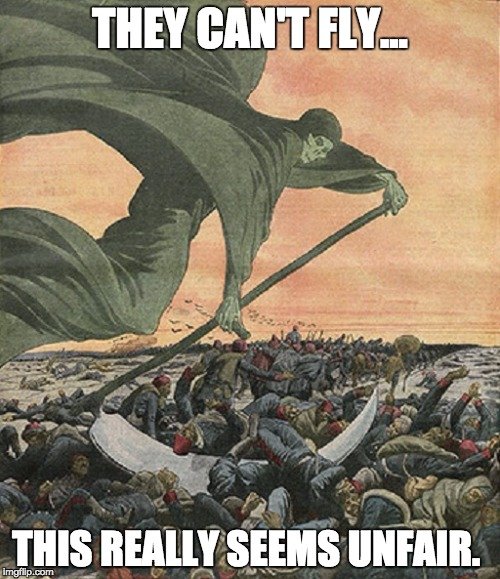 In total, the Grim Reaper is a terror-inducing image that has become extremely recognizable in modern pop culture. There are countless references to the Grim Reaper in music and movies, as well as satirical or creative takes on this figure in movies like Scream, Bill and Ted’s Bogus Journey and Hellboy II: The Golden Army, among many others.

Why Does The Grim Reaper Persist?

While some people believe that the era of silly superstition and magic is over, there are plenty of people who hang on to old traditions and beliefs. When people fail to understand something, or are afraid of it, they tend to create more manageable and tangible explanations.

When Death is in the shape of a man, it humanizes one of the most abstract concepts for humanity. In the same way that primitive people created stories that personified the moon, thunderstorms, meteor showers, eclipses and every other natural phenomenon, more advanced cultures still maintain certain traditions that shield them from the fear of death.

The Grim Reaper even appears in religious texts from the 14th, 15th and 16th centuries, lending credibility to the image, or at least strengthening its popularity. Organized religion thrived for centuries on the fears of people, reporting demons and witches and exorcisms and many other dark, occult topics. It comes as no surprise that the image of the Grim Reaper – a physical representation of Death – would eventually be tangled up with religious organizations. 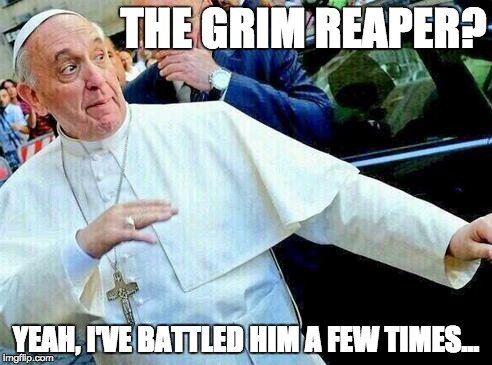 Today, the image of the Grim Reaper doesn’t instill the same level of fear in most people, as it has become ingrained in the cultural collective. However, it remains a common trope by which we are entertained, or that people can use to express some part of their personality.

At the end of the day, the Grim Reaper has truly grisly roots in the Black Death of the 14th century, but death has always been a subject of fascination and fear for people. From the jackal-headed Anubis, god of Death, in Egypt to the Grim Reaper and whatever comes next, humans will always find ways to pour out their fear and anxiety over death.

Death is the great social equalizer, which is why everyone would be scared when they see a cloaked figure in the distance, holding a scythe, slowly approaching, and counting down those final grains of sand!