While ancient mummies and other preserved organic matter can potentially carry ancient diseases, the likelihood is very small, as the DNA of bacteria and viruses degrade over time, and the risk of exposure is low.

Most of us grew up on scary stories about monsters, including werewolves, vampires and mummies. They remain popular source material for pop culture, from the sparkly achievements of the Twilight franchise to Tom Cruise’s clumsy reboot of The Mummy. However, of these big-screen monsters, mummified bodies do exist in the real world, although they don’t haunt the hallways of their tombs. Even without a curse, some people still believe they may pose a sinister threat based on ancient viruses, pathogens or diseases that may have been entombed with them!

Recent stories of permafrost melting around the world and the increased resurgence of older diseases has brought this issue back into the spotlight—can mummified animals and humans carry diseases from our ancient past?

What is a Mummy?

Before we can understand whether mummies are threatening the world with the next superbug, we should specify what we mean by mummies. You’re probably familiar with the mummies of Egypt, many of which were embalmed and treated in various ways to preserve the skin and organs, preventing them from decay. Bodies can be mummified through the use of chemicals, a lack of air, a lack of humidity, or extremely low temperatures. In the case of Egyptian mummies, they were often embalmed, treated with chemicals and sealed in air-tight sarcophagi, then buried in tombs! For that reason, when mummies are discovered today, they are often in excellent condition, having retained some of their original features and ancient tissues. 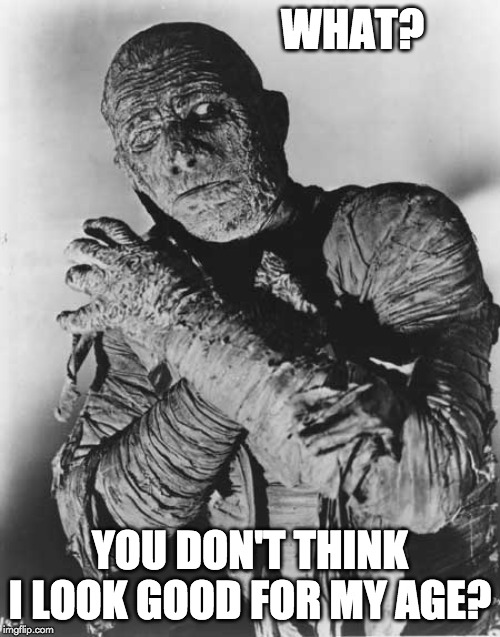 However, Egyptian mummies aren’t the only variety, and when it comes to the potential for spreading the next pandemic, mummies that are frozen may pose a larger threat than those buried beneath the pyramids. Ice mummies have been found all around the world, from Greenland and the Andes Mountains to the Siberian permafrost and the Italian Alps. Sadly, more mummies are formed by mountaineers in the Himalayan Mountains every year. Ice mummies have been found in glaciers and ice patches, but the conditions for them to form are complex. The body must be on non-moving ice, be exposed long to enough to be freeze-dried and not eaten by scavengers or buried, and then completely covered in ice.

Many ice mummies appear to have been accidental, unlike the preparation and careful placement of traditional mummies in sarcophagi, but some ancient cultures in Eastern Europe also buried their dead in freezing conditions, in large wooden chambers covered by stone, which allowed for permafrost to develop and preserve the bodies. Generally, however, ice mummies and those recovered from the permafrost are more exposed to the surrounding environment and the elements, which may be why people worry that these ancient mummies could release ancient germs!

Modern humans have been around for about 200,000 years, but much of that history was spent in small groups, families and tribes. These early humans were hunter-gatherers, rarely staying in one place for more than a few seasons, never settling down to build homes, villages and infrastructure. It wasn’t until 10,000-12,000 years ago, when agriculture began popping up in different parts of the globe, and crops like einkorn wheat, lentils, peas, chickpeas, flax, emmer and bitter vetch made it possible for people to remain in one place. The birth of agriculture opened the floodgates for society to progress, from villages to towns to cities, all in the course of a few thousand years. 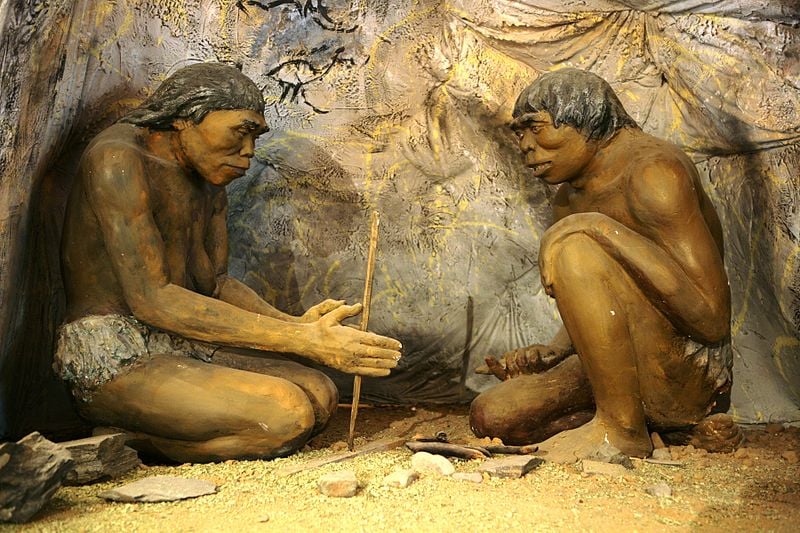 Prior to this, although there were certainly germs and disease that affected these people, population density was extremely low, and early humans had little contact with other groups. Diseases capable of resulting in an epidemic, such as smallpox or Ebola, require a plethora of human hosts to spread and survive, particularly when the disease can rapidly cause the initial host to perish. Before humans began gathering by the thousands into population capitals and large cities, there was little chance for a population-decimating disease to even exist.

With this in mind, any human remains that were mummified prior to 10,000 BC would likely pose no threat, as deadly epidemic-style diseases had not developed in human populations by that point. Humans beings have created some incredible things through the progress of civilization, expansion and collaboration, but increasing population density has also led to some truly horrific diseases.

Now, when it comes to viruses or bacteria surviving in a dormant state for hundreds or thousands of years, it is possible, but extremely unlikely. The conditions for the virus would have to be perfect, such as being preserved inside of a scab (in the case of smallpox) or in some other type of tissue that wasn’t exposed to any decaying influence. 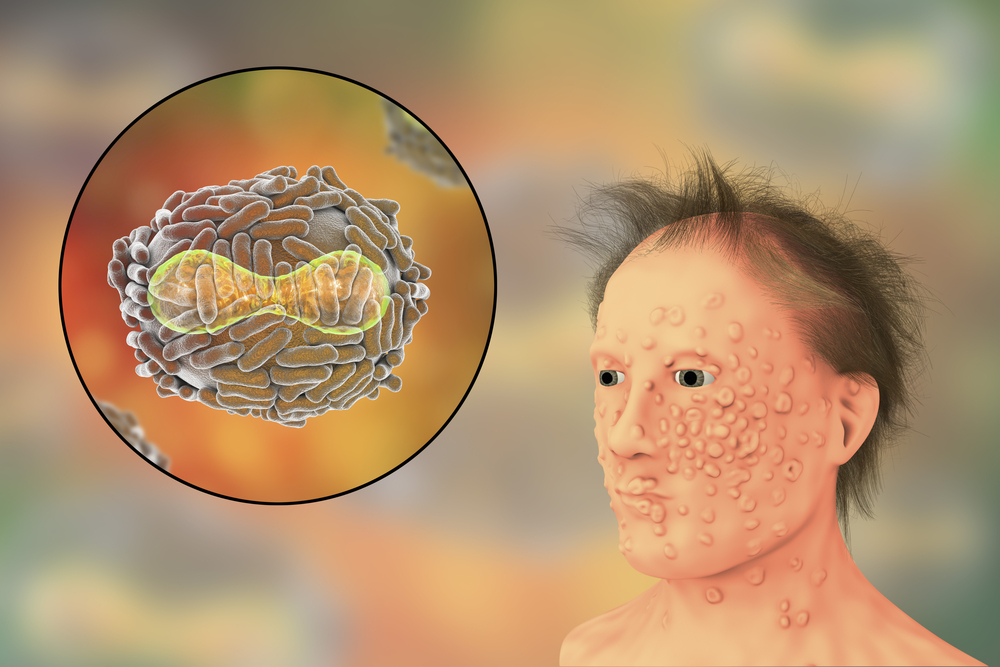 DNA has been taken from plenty of ancient skeletons, and in some cases, they can be sequenced to reveal diseases that may have infected and killed the individual. Remains of bodies from a few hundred years ago have led to sequencing of bubonic plague and cholera, but these strains of the disease are significantly degraded and could not be further cultured from the samples taken. Evidence from even older mummies shows further breakdown. Egyptian mummies are also less likely to avoid decay than those frozen in ice, so the chances of an ancient disease surviving beneath a sandy tomb are incredibly small.

While disease pathogens taken from mummies can be identified, the DNA is often degraded to only a few thousand base pairs, rather than the millions that would normally be present in a healthy bacterial or viral agent. Many of the worst diseases in the world are also RNA viruses; while these are impressively adaptive and capable of mutating to avoid elimination, RNA also decays faster than DNA, so viruses like measles, yellow fever and ebola would not survive in a mummy for thousands of years. 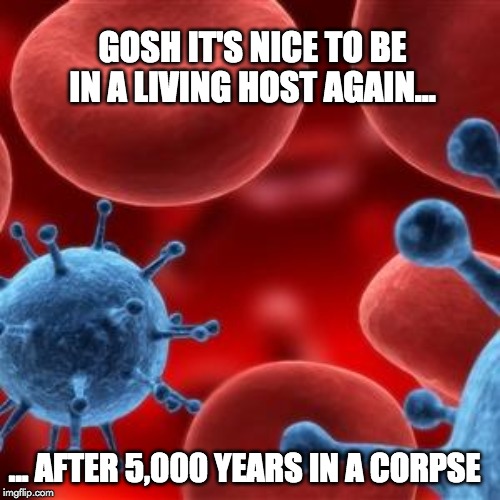 There have been some incidents where diseases have resurfaced in unusual areas, such as the anthrax outbreak in a reindeer population following a permafrost thaw in Siberia—an area that hadn’t seen the disease in more than 70 years. This disease did end up affecting the human population, but anthrax is far from an extinct disease, and one that we know how to combat.

There is a great deal of excitement and study on this topic, and some fear of what continued melting of permafrost and glaciers might reveal. However, there is no firm evidence that an infectious agent can not only be “revived” after millennia, but also thrive in a modern environment with modern microbes.

The idea of a “zombie virus” from mummies is quick to capture the imagination, but when you look at the hard science, the likelihood of a pandemic arising from ancient ice mummies is small. Provided that specific care is taken while handling and working with mummified remains from animals or humans, contamination or infection is nearly impossible.

That being said, the melting of the permafrost and glaciers is indicative of a much more realistic danger. The present climate crisis on Earth will be the greatest threat to our survival as a species, just as the Spanish flu and the Black Death once threatened our survival in the past.