People who are obsessed with taking selfies may be suffering from a condition called Narcissistic Personality Disorder. This disorder is characterized by a highly elevated sense of self, a strong belief that one is more important than others, and a lack of empathy for others. Narcissistic Personality Disorder can be treated through careful psychotherapy.

The word “narcissism” has trickled down into our everyday vocabulary, and we hear the word all the time, but what does it really mean? Let’s dive in into the psychological definition of the word and discover what it means to us in the present information-fueled generation. 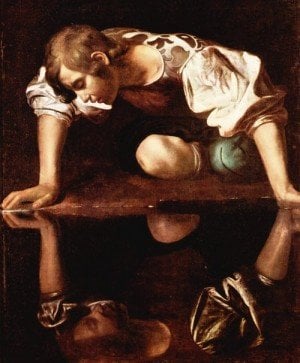 Narcissus By CaravaggioThe painting depicts the Roman myth in which a boy named Narcissus falls in love with his own reflection. It drives him mad and he then commits suicide. (Image Source: Wikipedia)

Psychologists have studied narcissism extensively, so if you think it’s just a personality type that you hear about in advice columns, then you would be wrong. It’s a serious problem that consists of specific traits that have been carefully studied and categorized by psychologists. Also, it is important remember that healthy self-esteem is completely different from unhealthy self-absorption.

Narcissism is generally understood as a state of mind that enables an individual into thinking that their existence is more valuable than other people. Narcissism manifests in two ways – grandiose narcissism and vulnerable narcissism.

Grandiose Narcissism has all the classic features that we associate with narcissism. These include extroversion, a desperate need to be the center of attention, and a tendency to dominate every relationship. A person suffering from grandiose narcissism is more likely to pursue avenues of power, such as being a celebrity or a politician. I’m not insinuating that all people who pursue these occupations are narcissistic. Most of them pursue these careers for positive reasons, such as achieving their full potential or helping the community. However, narcissists seek out these platforms simply to increase their own status and find validation through the approval of strangers.

Vulnerable Narcissism, on the other hand, is very different. Vulnerable narcissists are quiet and reserved, but have a very strong sense of entitlement. They feel easily slighted if someone challenges their perspective. Vulnerable narcissists have trouble holding on to any healthy relationship because they expect too much from their significant others.

Either way, narcissism has a negative impact on a person’s life. Grandiose narcissists tend to make riskier and more dangerous decisions, as they lack compassion for others. People with vulnerable narcissism usually become unfaithful in a relationship, as they feel that they deserve better.

Just to be clear, common everyday narcissism is different from Narcissistic Personality Disorder. The latter proves detrimental not only to the people who have it, but also everyone around them. In other words, the next time a selfie-obsessed friend of yours praises his own photograph, please don’t label him with the scary psychological word ‘Disorder’. As a matter of fact, only 1-2% of the world’s population has this problem. It also affects adult men more than adult women.

Also Read: Are We All Becoming Narcissists?

The 5th edition of the American Psychiatric Association’s Diagnostic and Statistical Manual describes the following traits of narcissistic personality disorder:

Sure, go on and promote more narcissism, won’t you?

Through studies of twins, certain genetic links have been established that explain the occurrence of narcissistic personality disorder. However, no genes have been isolated as a specific cause.

Genes may be the realm of “nature”, but “nurture” also seems to play an important part in causing this disorder. If parents put their child on a pedestal all of her life, she is more likely to develop grandiose narcissistic traits. Similarly, cold and unemotional treatment of a child can lead to vulnerable narcissism. Hitler – the quintessential example of Narcissism

Culture creates as much of an impact as the family environment does. A culture that encourages individuality over group dynamics is more likely to have narcissistic individuals. For example, in America, the number of people suffering from narcissistic personality disorder has significantly increased since the 1970s. However, the America of the 1960s – the one that celebrated communal living – was far less burdened by narcissism.

Also Read: What’s The Difference Between Psychopaths And Sociopaths? Narcissism is like a disease that permeates a person’s life, and spreads outward, making other people suffer even more than the bearer of the disease. Fortunately, it can be treated through careful psychotherapy, but this tends to be difficult, considering narcissists’ predisposed hatred for self-criticism. Even so, that shouldn’t stop narcissists from trying to become a bit more compassionate and self-aware!