The Vitruvian Man is a beautiful drawing that was created in 1490 by Leonardo da Vinci, an Italian polymath of the Renaissance and one of the brightest men to have ever lived. You’ve surely come across this picture at some point— a man in two superimposed positions with arms and legs outstretched in a square and a circle. One might think of it as merely a beautiful drawing, but there’s actually much more to it! 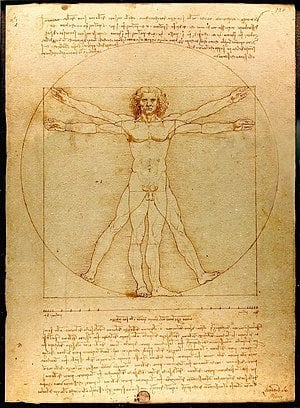 This seemingly simple drawing created in pen and ink on paper is indeed the answer to an age-old geometric problem that had mathematicians pulling their hair out for years!

The notes accompanying the drawing, sometimes called the Canon of Proportions or the Proportions of Man, elaborately outline the significant concepts and interpretation of the drawing in geometric form. The drawing is also believed to be the philosophical solution to the nature of man.

This begs the question, what was the problem that had everyone so exasperated? However, let’s first try to understand a bit about this unusual Man!

Why “Vitruvian”: Origin Of The Name

Marcus Vitruvius Pollio, commonly known as Vitruvius, authored the famous treatise on architecture entitled De Architectura. He greatly emphasized the importance of symmetry and proportion in his discussions on building and designing temples. The concept of the Vitruvian Man emerged through his belief that the principles governing the representation of the human form also applied to temple architecture in terms of weight, symmetry and proportion. 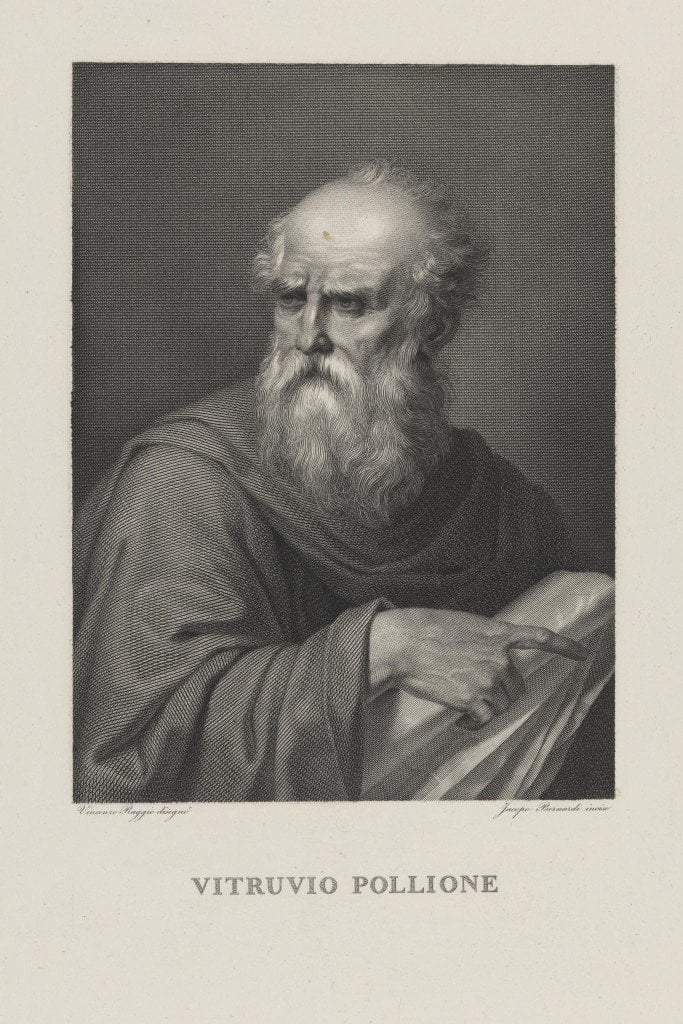 The book records numerous interesting observations made by Vitruvius about the proportions of the human body. Among these was his observation that the navel is the center of the human body. He noted that if one takes the navel as a fixed point on a compass, a circle can be drawn perfectly around the body. Another interesting remark found in his work was that the height of a man was nearly equal to his arm span. He observed that a sketch of a body with arms outstretched could perfectly be placed inside a square.

Leonardo da Vinci was particularly fascinated by these two ideas. The area of a circle or square could be easily calculated individually, but the real challenge lay in constructing a square with the same area as a given circle using a compass and a straightedge. The concept of squaring the circle was what made the case so unique and interesting. 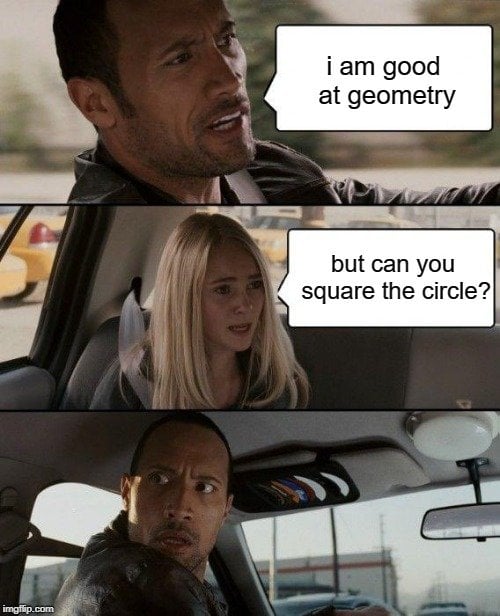 Leonardo da Vinci was not the only one who worked on Vitruvius’ claim that a human body could simultaneously fit into a circle and a square; many artists had attempted to design the Vitruvian Man, but no one had made a precise drawing along these lines in the centuries since Vitruvius first composed his description.

Francesco di Giorgio, a lesser known but equally illustrative contemporary of Leonardo, sketched his version of the Vitruvian Man, which was suggestive, but not very precise. The elements of the drawing were rendered rather casually and did not attempt to show accurate proportions. 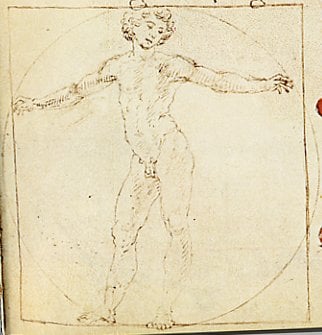 The version of the Vitruvian Man sketched by Francesco di Giorgio was suggestive, but not very precise. (Photo Credit :Wikimedia Commons)

The many artists who had attempted to design the Vitruvian Man had struggled to depict the two postures of the man using a square concentric with the circle. Leonardo, however, solved the complication by separating the center of the two postures, one for the circle centered at the navel and the other for the square centered at the genitals. Some believe that this solution was first put forth by Giacomo Andrea, a dear friend of Leonardo and an expert on Vitruvius, who was killed and erased from history for his loyalty to the Duke of Milan after the French occupied Milan.

Geometry Of The Vitruvian Man

Leonardo’s drawing, unlike those of all the other artists, was meticulously done. His confident lines showed that he had planned this drawing very carefully and knew precisely what he was doing. Furthermore, the notes accompanying the drawing clearly elaborate on the classical architecture concepts employed, as well as Leonardo’s observations.

In the second part of his notes, he points out that:

If you open the legs so as to reduce the stature by one-fourteenth and open and raise the arms so that the middle fingers touch the level of top of the head, know that the centre of the extremities of the outspread limbs will be in the navel, and the space between the legs will make an equilateral triangle.

Leonardo da Vinci was a man of science and art, which explains why the Vitruvian Man (named in honor of Vitruvius) is a combination of both. Since Leonardo was fascinated by the ideal proportions of the human body, he applied the concept of the divine proportion or golden ratio to the Vitruvian Man, as he did in other famous paintings, such as the Mona Lisa and The Last Supper.

The original piece of work is kept in the Gallerie dell’Accademia in Venice, Italy, and is shown to the public only occasionally, like most works done on paper from that long ago.

Today, the image of the Vitruvian Man is considered to be an embodiment of health and fitness and is often used as a portrayal of a balanced, healthy man. It is also associated with the practice of medicine, symbolizing three essential attributes of an ideal physician – science, humanitarianism and artistry.

Also Read: How Much Does The Mona Lisa Cost Today? What Makes It So Special? 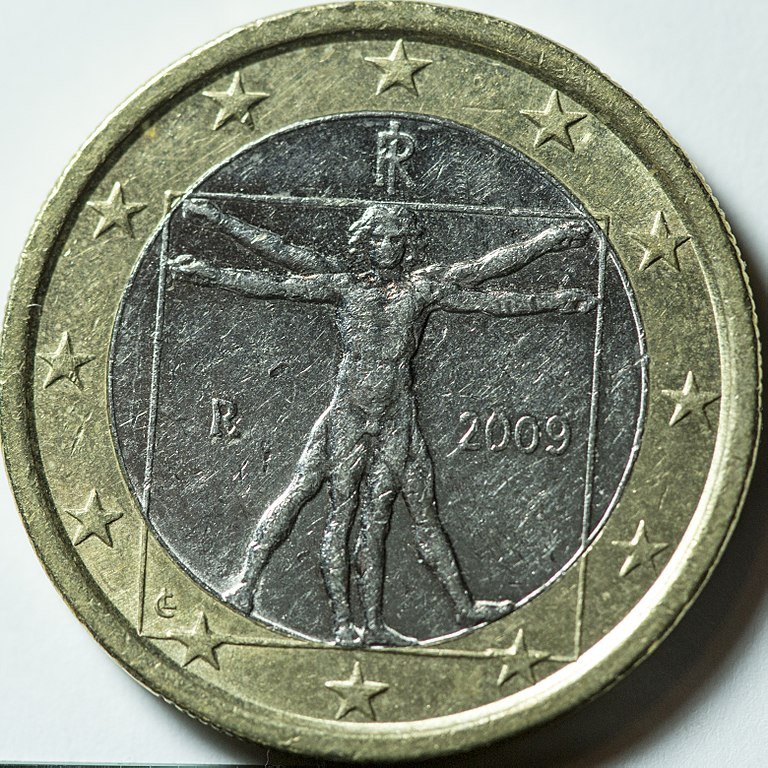 In conclusion, the Vitruvian Man represents a combination of architecture, anatomy and geometry, and embraces the idea that mathematics underpins both the natural and the man-made worlds. Leonardo da Vinci has given the design the power of symmetry, divine proportion and beauty, making it a true masterpiece in history that continues to thrill and impact us today!