One of Socrates many excellent quotes states that, “Wisdom begins in wonder.” He wasn’t wrong, as wonder truly is nourishment for the soul. As humans, we can look at a sunset and be moved to tears, unlike any other animal on the planet, as far as we know. Studies show that awe-induced wonder can bring about more profound cognitive abilities, boost our empathy, and help us connect with the world around us in a much more meaningful way. The Wonders of the World have always piqued the interest of anyone who has laid eyes on them. In this article, we will take a closer look at the seven wonders of the ancient world, the first compilation laid down by the historian Herodotus and Callimachus at the Museum of Alexandria. Since six of the seven ancient wonders no longer exist, there are also Seven Wonders of the Modern World, but we’ll get to those another day! 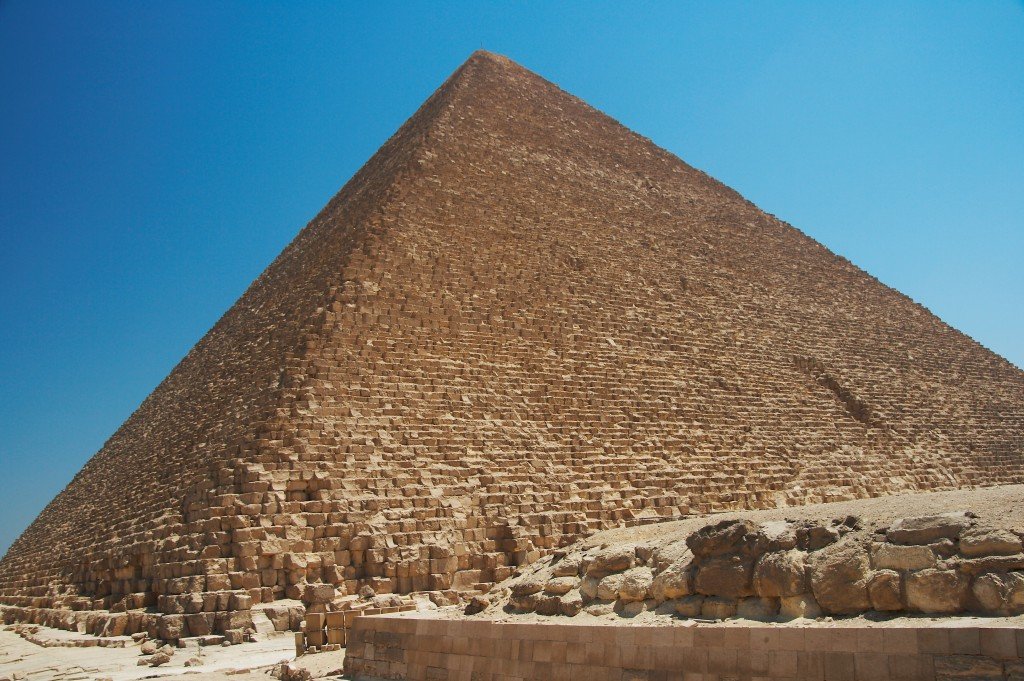 The Great Pyramid of Giza is the oldest and largest of the three pyramids of the Giza Pyramid Complex. It is the oldest of the seven wonders of the world and the only one that remains largely intact and standing. Egyptologists believe that the Great Pyramid of Giza was built as a tomb for the Fourth Dynasty Egyptian pharaoh Khufu. The timeline of construction for the pyramid is estimated to be roughly 20 years. That speed of construction, taking into account the existing stones today, represents the movement and placement of about 800 tons of stone every day. The pyramid consists of 2.3 million blocks of stone. Given these numbers, the average rate at which each stone would have been placed is around 12 blocks of stone every hour, day and night, for 20 years.

The pyramid also remained the tallest man-made structure for close to 3,800 years. It was surpassed by the Lincoln Cathedral only in the year 1300. It isn’t simply the height that the ancient Egyptians achieved which made the pyramid such a marvel, but also its engineering dexterity. The engineering precision that the ancient Egyptians implemented is incredible.  The bases on the four-sided pyramid have an error of only 58 millimeters, and variations in its symmetry are only 15 millimeters on either side….and this was more than 4,000 years ago! 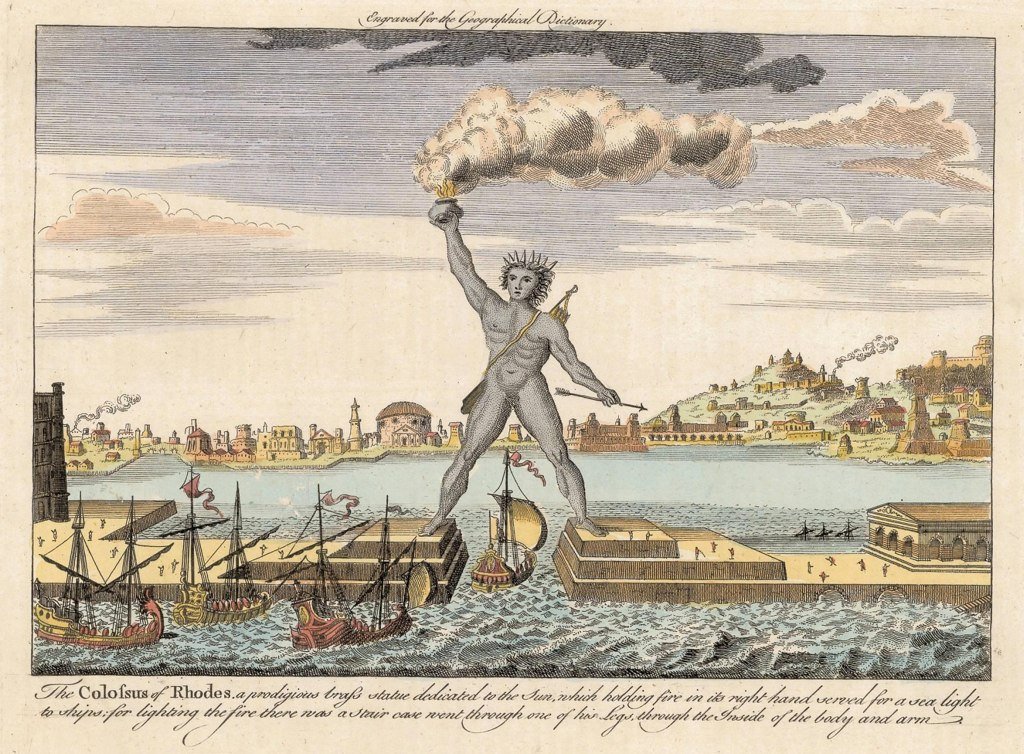 The Colossus of Rhodes was a statue that depicted the Greek God of the Sun Helios. It was constructed as a celebratory symbol for Rhodes’ victory over the ruler of Cyprus. It was constructed by the infamous Greek Sculptor Chares of Lindon in the year 280 B.C. Construction of the statue is estimated to have begun in 292 B.C. It is suggested in historical accounts that iron tie bars were used to hold the structure up. The skin was made with the help of brass plates. It also consisted of a marble-laden entrance that led to the interior of the statue. It is estimated that the statue took 12 years to build. According to historical references, the Colossus stood at a height of 33 meters, which is the approximate height of the Statue of Liberty from the foot to her crown. The statue stood for close to 54 years, but no longer stands today, as it collapsed in an earthquake that occurred in 226 B.C. The fall of the statue led to severe damage across the city.

The Hanging Gardens Of Babylon 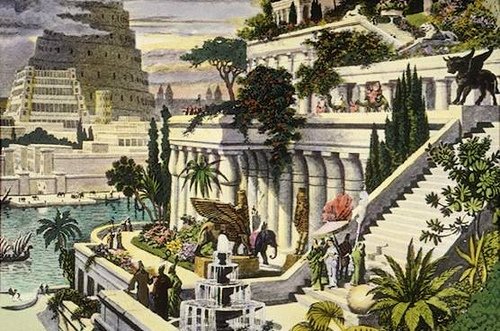 The Hanging Gardens of Babylon are best described as a remarkable feat of engineering, as they consisted of an ascending series of tiered gardens. These bifurcated gardens contained a variety of trees, shrubs, and vines that made the whole structure look like a large green mountain constructed on bricks. This marvelous construction was built in Babylon, which today is a place named Hillah, situated in Iraq. The reason why the Hanging Gardens were built seems to be a perplexing tale. According to legend, the Neo-Babylonian King Nebuchadnezzar II (who ruled between 605 and 562 BC) built it for his Median Wife Queen Amytis, because she missed the green hills and valleys of her homeland. However, strangely enough, even though the Hanging Gardens have earned a place as one of the Seven Ancient Wonders of the World, it is unclear as to where exactly this wonder existed. It is never mentioned in any of the ancient Babylonian texts, let alone its location, which leaves one to wonder whether the Hanging Gardens of Babylon existed at all or whether it was all just a mythical invention! 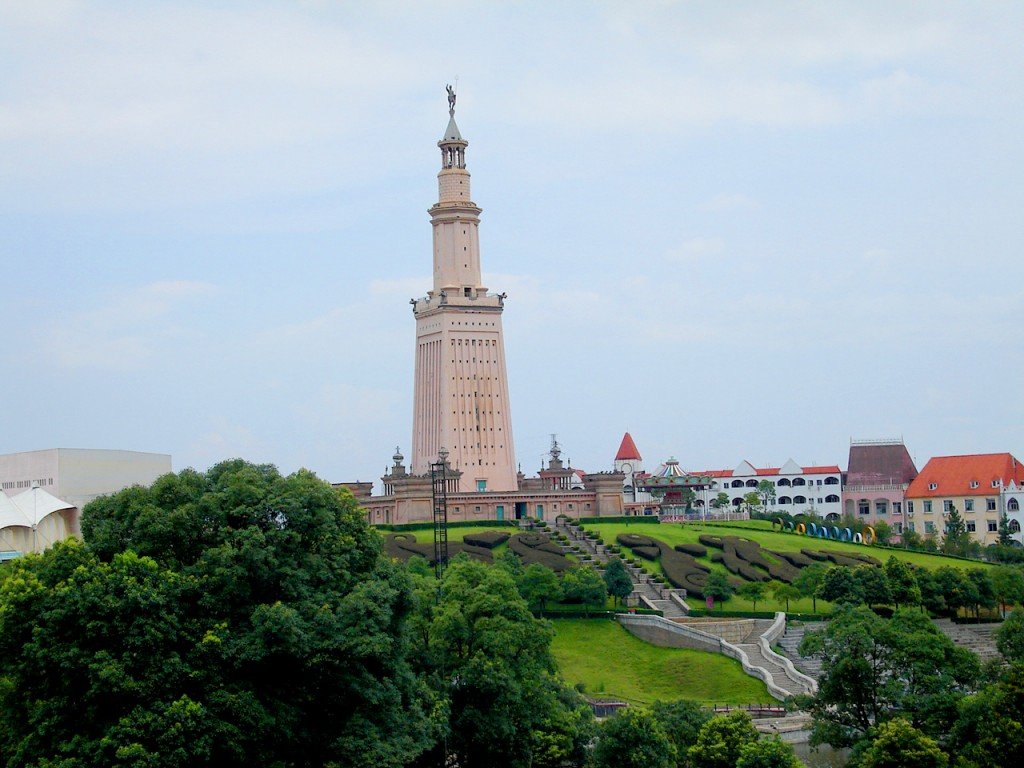 Also Read: What Are The Seven Wonders Of The Modern World?

The Lighthouse of Alexandria was built by the Ptolemaic Kingdom of Egypt on the small island of Pharos, located on the western edge of the Nile Delta. In 332 B.C. the city of Alexandria was founded, opposite the small island of Pharos. Alexandria and Pharos were connected by a small mole. A mole is a massive stone structure that connects two places usually separated by water. The lighthouse was constructed in the 3rd century B.C. After Alexander the Great died, the first Ptolemy (Ptolemy I Soter) announced himself king in 305 BC and commissioned its construction shortly thereafter. The building was finished during the reign of his son, the second Ptolemy (Ptolemy II Philadelphus). Most accounts of the lighthouse are taken from Arab traveler logs of the time. From these logs, we can estimate that the lighthouse was anywhere from 103-118 meters tall. The lighthouse no longer exists, as it experienced a series of earthquakes that severely damaged it. Unfortunately, in the year 1480, even the remnants of the lighthouse crumbled, leaving no trace behind. 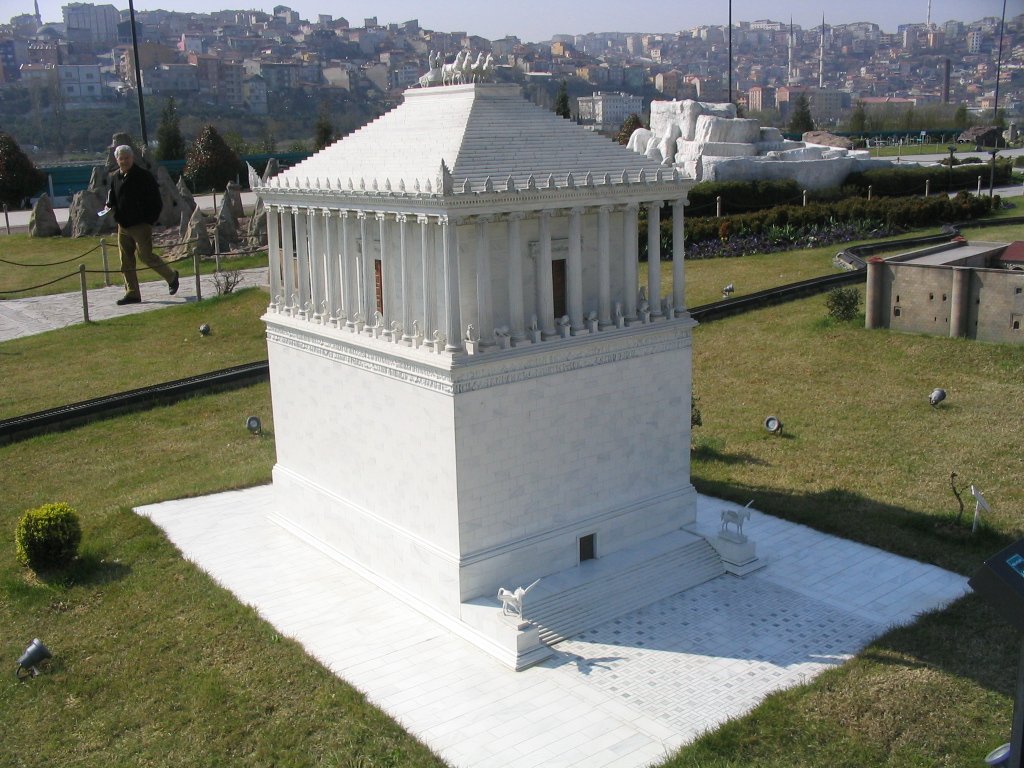 The Mausoleum at Halicarnassus was a tomb built between 353 and 350 B.C. The present-day location is in Bodrum, which is situated in Turkey. It was built for Mausolus, a Viceroy in the Persian Empire of the time in the region of Halicarnassus. The Mausoleum was approximately 45 meters in height, and all four sides were adorned with sculptural reliefs. The tomb was erected on a hill overlooking the city. The whole structure sat in an enclosed courtyard, and at the center of the courtyard was a stone platform on which the tomb sat. A stairway flanked by stone lions led to the top of the platform, which bore on its outer walls many statues of gods and goddesses.

At each corner, stone warriors mounted on horseback guarded the tomb. At the center of the platform, the marble tomb rose as a square tapering block to one-third of the Mausoleum’s 45 m (148 ft) height. This section was covered with bas-reliefs showing action scenes, including the battle of the centaurs with the Lapiths, and the Greeks in combat with the Amazons, a race of warrior women. A sculptural relief is a kind of sculpture in which the sculptures are attached to a solid background, in this case, a wall. Each side of the Mausoleum was created by one of the four famous Greek Sculptors of the time—Leochares, Bryaxis, Scopas of Paros and Timotheus. However, the structure no longer stands; just like so many other ancient wonders, it has faced a series of earthquakes that have completely flattened it.

Statue Of Zeus Olympia And The Temple Of Artemis 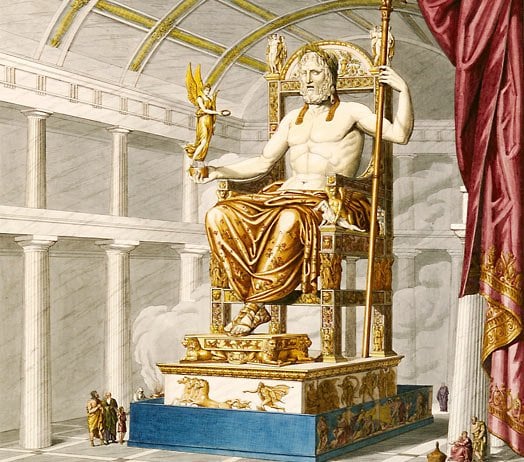 The Statue of Zeus was commissioned by the Eleans (the people of the district of Elis in Greece). It was initially built to be a symbol for being the custodian of the Olympic Games. Later on, however, it became an idol for the temple of Zeus. It was classified as a Chryselephantine sculpture. Such a sculpture usually has a wooden framework and is covered with gold and ivory. The statue was crafted in such a way that it depicted the God Zeus in a wooden cedar throne ornamented with ebony ivory gold and precious stones. The statue was also constantly covered in olive oil to prevent the humidity from affecting the ivory plates. Sadly, as time went on, the worship of Pagan Cultures went into decline. In 391 A.D., the Roman Emperor Theodosius banned Pagan practices altogether. This led to neglect of the statue, which finally crumbled due to a lack of proper care and maintenance. 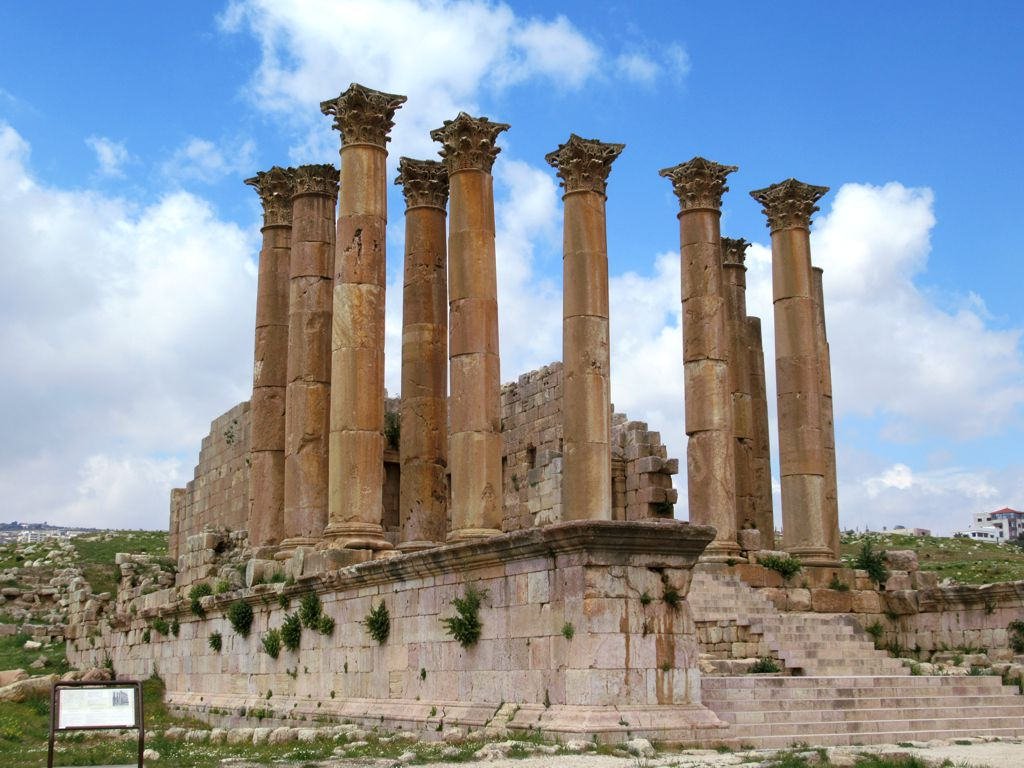 Also Read: How Science Shaped The Pantheon Of Rome?

The final wonder of the world on the list is the Temple of Artemis, which was dedicated to the ancient goddess of the same name. This temple was ironically built three different times. It was only after its third iteration that the temple was finally inducted into the list of ancient Wonders of the World. The first version of the temple was constructed in the Bronze Age. It then went on to be destroyed by a flood, but its reconstruction was very grand and it took ten years to build the second version. The second version was finally destroyed in 356 B.C, and it was finally rebuilt into its final form. It is not clear when the final temple was destroyed, but it was clearly torn down during the advent and rapid rise of Christianity.

In conclusion, we can state that of all the wonders of the ancient world, the Great Pyramid of Giza is the only one to stand the test of time!