Have you ever watched a television show on mute and tried to predict what the characters were saying? Or how they were feeling in a given scene?

Most of us have tried this at some point in our lives and we’ve probably been able to accurately predict what was happening, whether it was an American soap opera or a Korean comedy show.

Here’s another example. Think back to a time when someone told you everything was alright, but you definitely felt otherwise.

Why was that? Was it because their lips were pressed, or because their hands were folded across their chests? What was it that made you feel there was something more going on than what they were saying?

Do we have a super power? Or is this some sixth sense that we possess?

The ability to read people is a skill that’s almost congenital… even the smallest children can figure out when their mothers are mad. This skill develops as we grow older; our experience and interaction with others plays a key role in developing this skill, which is called non-verbal communication.

This type of communication is critical to understanding people and helps us fill in the blanks when things are left unsaid. It encompasses a number of things, including emotions, facial expressions, eye contact, touch, and body language. 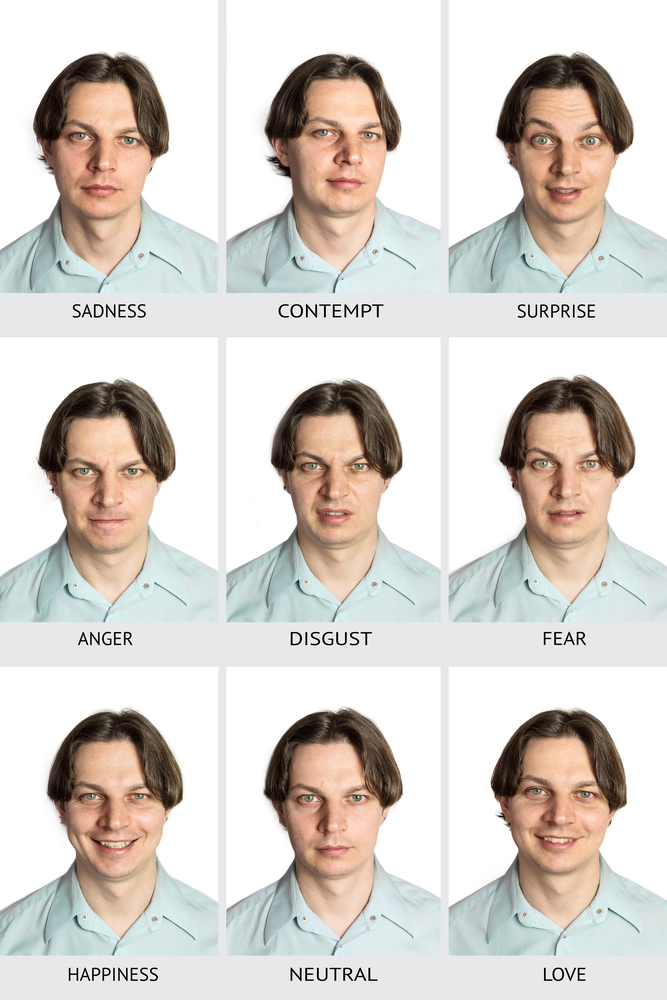 A few basic emotions that are recognized all over the globe (Photo Credit : Plateresca/Shutterstock)

Facial expressions are a gateway to all of our emotions, and they are largely universal, or at least, the facial expressions pertaining to the six basic emotions are. In other words, if you show these facial expressions to anyone, anywhere on the globe, they would be able to recognize the emotion quite accurately. However, is the same thing true of body language? Is it also a global means of communicating?

What is body language?

Body language, like facial expressions, are a gateway to a person’s emotions. It helps us communicate what we’re feeling without saying much at all.

Think about a time you were very angry; did you clench your teeth or ball up your fists? What about when you were anxious? Did your palms get sweaty, or did you begin to stammer? In most cultures, these cues that reveal emotional states are quite common, largely because they are linked to a body’s physiological state during those periods of emotion.

Consider Amy Cuddy’s power poses; her research offers a very biological perspective about postural feedback, arguing that when we stand in power poses, such as the Wonder Woman pose or a posture in which both our hands and legs are stretched, we feel more powerful.

Studies like these were replicated in many different parts of the globe and they mirrored the physical aspects of her findings—power posing/using powerful body language does make us more confident, a fact that is not affected by culture.

However, what is different between cultures are the gestures we choose to use. 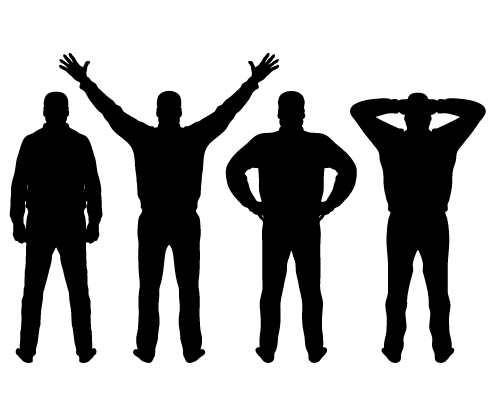 What holds true for India may not be the same in Africa; in fact, a gesture that means something in a particular Northeastern state of India could mean something very different from the same gesture in a South Indian state.

People belonging to western cultures are more aware of this concept and respect it to a large extent, but the same does not hold true within an Indian or Asian Context.

Have you ever been on a crowded bus, or even an uncrowded one? Have you noticed the proximity of the person next to you? Most of the time, in Asian public transport, people are quite literally ‘ON’ you. Essentially, the concept of personal space ceases to exist. 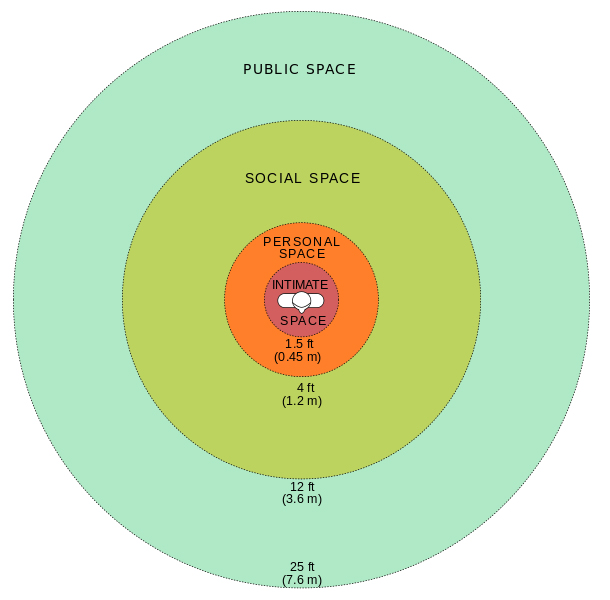 The different zones of intimacy/ The concept of space (Photo Credit : WebHamster/Wikimedia Commons)

Next, count two on your fingers. If you’re British, or part of a country that was once colonized, you would be holding up your index and middle finger. But if you’re European, your thumb and index finger would denote the number. This is quite simple to understand, as European schools teach counting starting with the thumb, while in British schools, counting starts by using the index finger.

From these examples above, it’s quite evident that though we have similar gestures, our cultural context adds a slightly different meaning!

Another component of nonverbal communication is touch. A pat on the back can be interpreted as praise, but also aggression, depending on who delivers it and when. Again, is this universal?

In India, it’s common to see men holding each other’s hands while walking on the streets; it’s common for women to do the same. No one really cares about this much, as it’s simply a show of friendship among the two. However, if the same action were repeated in a Western country, it could suggest homosexuality.

At times, something as simple as saying hello could turn into a nightmare if one does not consider another culture’s use of touch, or the lack of it. A general and accepted way of saying ‘Hello’ in western culture is a brief handshake. A great deal of importance has been placed on how one should shake hands. In India, however, if the same is done to greet an older man, perhaps someone in his 60s, you might as well dig your own grave, because by giving him a firm handshake, you’re calling yourself his equal. Furthermore, the ideal way to greet someone in India is by touching their feet, not by shaking their hand.

Again, not all cultures appreciate being touched at all. The Japanese absolutely detest being touched; if you’ve seen their typical greeting, they bow to someone standing in front of them to greet them—no handshakes. Touch, like gestures, varies according to one’s culture. 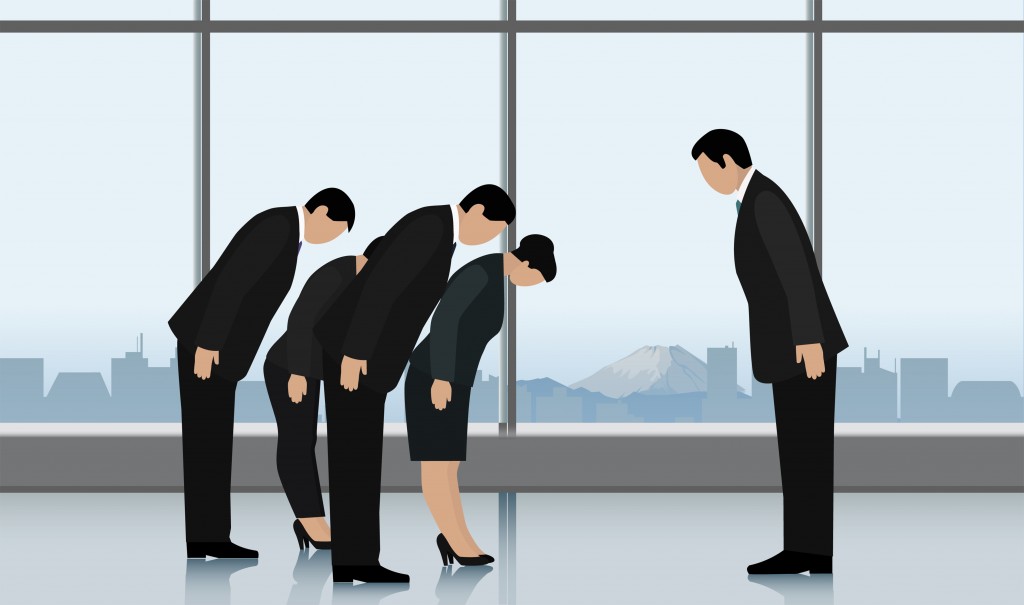 Have you ever been in a fight and heard someone say, ‘Look me in the eye and say that!’

Eye contact can indicate a number of things, and most of the time, that meaning is uniform across all cultures. For example, when your eyes are darting around the room, it could indicate a lack of interest, while averting your gaze could be seen as trying to avert conflict. Continued or rapid blinking often shows denial or a lack of acceptance. Additionally, if you thought eye contact was only common across humans, it’s not. Apes have exhibited similar gestures to convey similar meanings among their family groups and kin.

Does body language really depend on culture?

The answer to this is quite subjective and contextual, so both yes and no. In some places, body language to indicate emotions, gestures to depict hellos and goodbyes, touches to indicate friendship and love, and eye contact to respond are all the same—the language is universal. It is understood by everyone, no matter where you’re from or what you need to express.

The problem arises because some gestures or actions in different cultures are the same, but have vastly different meanings. A lot of times, a harmless gesture in our culture could be insulting to someone from another culture. For example, the ‘OK’ symbol is used as a ‘superb’ symbol in India, but go to Turkey and flash the ‘OK’ sign and you’re asking for a fight, as this symbol is considered offensive.

So, what should we do? Should we not use gestures at all? Gestures are almost innate, so eliminating them would be a futile act. A recent study from the University of Chicago showed that blind participants also demonstrated gestures of the language they speak. Gestures are not things that are observed and learnt, but rather something that comes with the language of communication. Essentially, no matter how much we try to stop ourselves, we will end up communicating non-verbally in some way or another. For those of us who are avid television watchers, a lot of our body language is influenced by the shows we watch. With the rise of Netflix and Prime, people around the world are often more exposed to Western culture than their own. It’s not surprising that so many people mimic body language similar to the characters of our favorite shows! 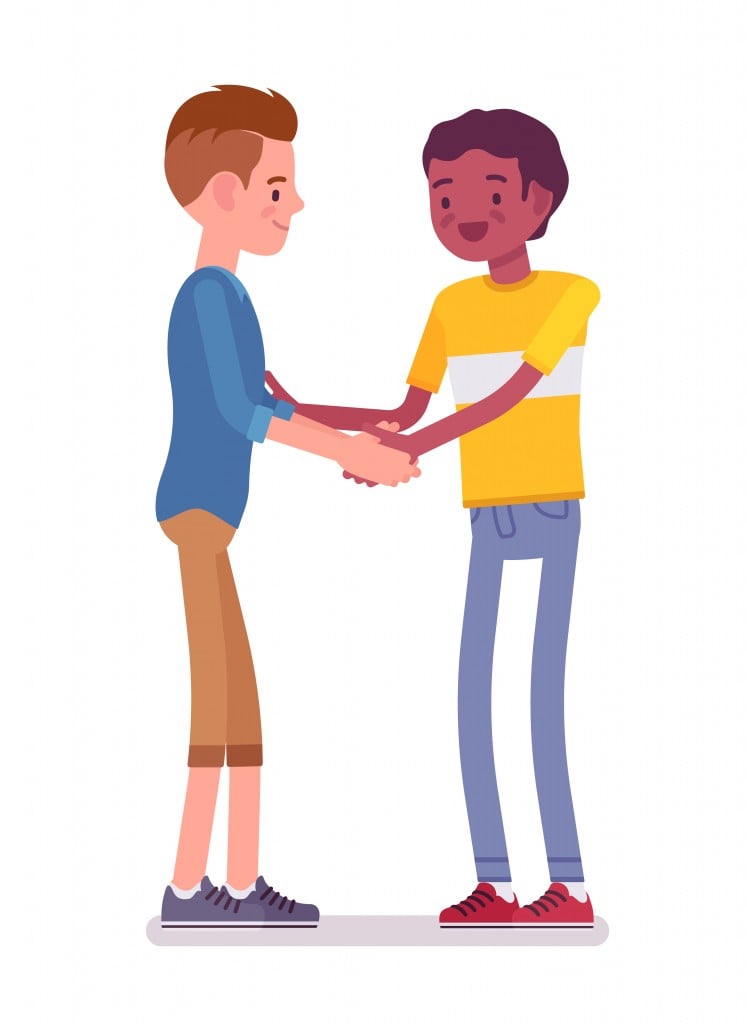 After all that reading on various types of body language, what cues do you notice this picture? (Photo Credit : Andrew Rybalko/Shutterstock)

At the end of the day, our body language is culturally specific and can impact how others see us (and our chances of survival), even though some methods of communication and contact are universal. So, the next time you decide to travel to another country, other than looking up places to visit, a quick Google search or a comprehensive book can also guide you on how to better interact with the locals, and avoid offending them during your stay!