Although wearing a medieval suit of armor and crouching are theoretical remedies for surviving a lightning strike, FEMA recommends that people simply follow the 30/30 rule during a thunderstorm.

You have almost certainly seen the emblematic depiction of a person being struck by lightning in cartoons or movies. The depiction is true to an extent, because when humans are struck by lightning, it generally causes burns and other critical injuries. Although it’s a tragedy that can afflict anyone, and the chances of it happening are incredibly small, what’s the best way to survive a lightning strike? What is the safest clothing and posture that can shield you from a lightning attack?

Before we identify the safest posture and clothing to survive lightning, let’s try to understand what lightning actually is and what ravages it can inflict.

Scientists opine that lightning can be caused by the collision of ice particles with a cloud containing an excessive negative charge. This charge is believed to be so strong that it repels electrons (the negatively charged particles) toward the ground, essentially turning the ground into a positively charged end. In a way, lightning is a runaway force that discharges to the ground. It races towards the ground at the speed of light, i.e., 3,00,000 km/hour, striking the ground with a force of 300 KV. This is roughly 150 times more powerful than a household’s electrical supply, so it has a huge potential to inflict serious physical and mental injuries.

If you happen to be one of those unlucky souls to get struck by lightning, there is a high chance that you’ll be afflicted with a third-degree burn. Your hair and clothes may even catch fire. At times, lightning is so ravaging that it knocks off a person’s shoes! As one victim recalls, the pain when struck is tantamount to thousands of wasps simultaneously stinging you from within.

As lightning strikes carry thousands of volts, if struck directly on the head, a strike can result in severe nerve damage. This may then lead to cognitive problems, such as memory loss, and may even alter your personality.

There was an incident a few years back wherein an orthopedic surgeon was struck by lightning. After that incident, he developed an inscrutable urge to play the piano. He began composing music. The music, he claimed, lingers around his head ever since that strike. In fact, after a few months, he completely abandoned his career as a surgeon and switched his profession to music!

How To Survive A Lightning Strike?

Before I go into the details of surviving a lightning strike based no wearing the right garment or taking the right protective pose, let’s take a small test. Assuming that you’re caught in a big open field in the middle of a violent thunderstorm, which of the following garments do you think is more likely to keep you safe? Your options are:

b. A superhero costume

What’s your guess? If you answered medieval metallic armor, then you’re correct! Yes, this might surprise many, but contrary to popular wisdom, metallic armor would actually be the safest bet. 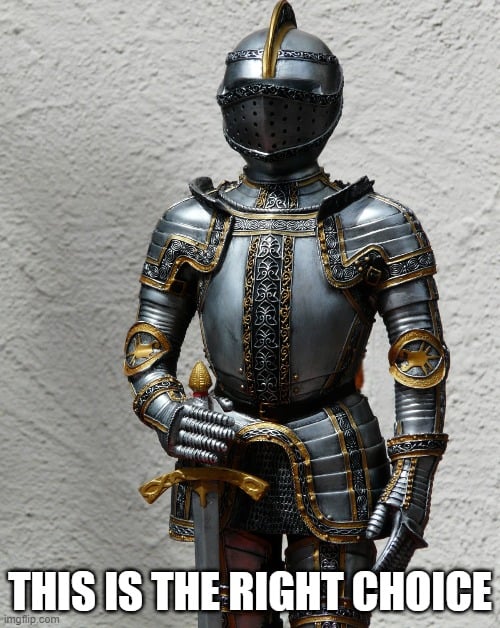 Lightning is nothing but electricity. We generally visualize electricity as coming only from power plants via a transmission line to the sockets of our home to light, cool or heat it. However, from a scientific perspective, electricity is virtually everywhere; in clouds, in pets, and even in the chair you’re sitting in to read this article! Although the type and intensity of electricity vary, it’s everywhere!

As we now understand, lighting bolts are just long streams of fast-flowing electrons looking for the easiest path from point A to B, i.e., from cloud to ground. None of the everyday clothing suggestions, including a raincoat, superhero costume or causal jeans, would provide an easier path to these electrons than metallic armor. So, why would a material that attracts electricity (metal) actually shield you from its peril?

Also Read: How Safe Are You Indoors During A Lightning Strike? Path of flow of electricity: A to B

Ironically, it does so for the exact same reason that it attracts the electrons of the lighting in the first place! To begin with, we should all know that metal is a good conductor of electricity. Now, when it comes to good metallic conductors, electrons can simply glide over a metallic surface without needing to penetrate deep into the surface of metals. To understand this better, try to think of a hollow metallic container, cylindrical in shape, with some stuff stored inside it. If this metallic container is connected to a battery so that a current can pass through it, current won’t reach the stuff stored inside the container. This is what physicists called a Faraday cage. Your metallic armor would behave much like a Faraday cage, passing current from the outer metallic body quickly to the ground, while shielding the person inside.

If you have ever seen an electrician working on a high-voltage transmission line, they generally wear a steel-woven garment. In technical parlance, this is known as a Faraday suit.

In fact, your car is also somewhat like a Faraday cage. Barring the rubber tires, a car is composed of a closed metal frame that is likely to keep you safe amidst a lightning strike. It will channel the electrons around the outer surface to the ground, rather than through your body.

That being said, you should bear in mind that the ‘Faradayness’ of your car also depends on the quality of metal used in the car’s frame; if the metal is substandard, then your car might cease to behave like a Faraday cage. On the other hand, premium convertible cars do not have metal roofs, so that also makes convertibles much more dangerous during a lightning strike. However, what if you’re far away from your car and get caught on open ground during a storm? Chances are very small that you’ll conveniently be wearing medieval armor or a professional Faraday suit. In that case, your next best bet to survive would be adopting the right body posture.

Obviously, there is no guaranteed way of predicting when lightning will strike, but there are some telltale signs that should urge you to take shelter before lighting descends around you. A tingling sensation on the skin, hairs on your arm/neck standing up, or hearing of an inexplicable clicking sound could all be harbingers of an imminent lightning strike. Also, if you notice an unusual but dull bluish-white glow on metal, there is a strong chance of a lightning storm. If you can’t find shelter, the only way to minimize the risk of a lightning strike is to diminish your body posture, while keeping your “footprint” small.

Experts suggest crouching down and bowing your head between your knees. Standing upright would give lighting the fastest route to the ground, whereas lying completely flat on the ground exposes a large part of your body to the ground, which might be carrying current due a strike nearby. Therefore, standing straight or sleeping on ground are both riskier during a lightning strike. 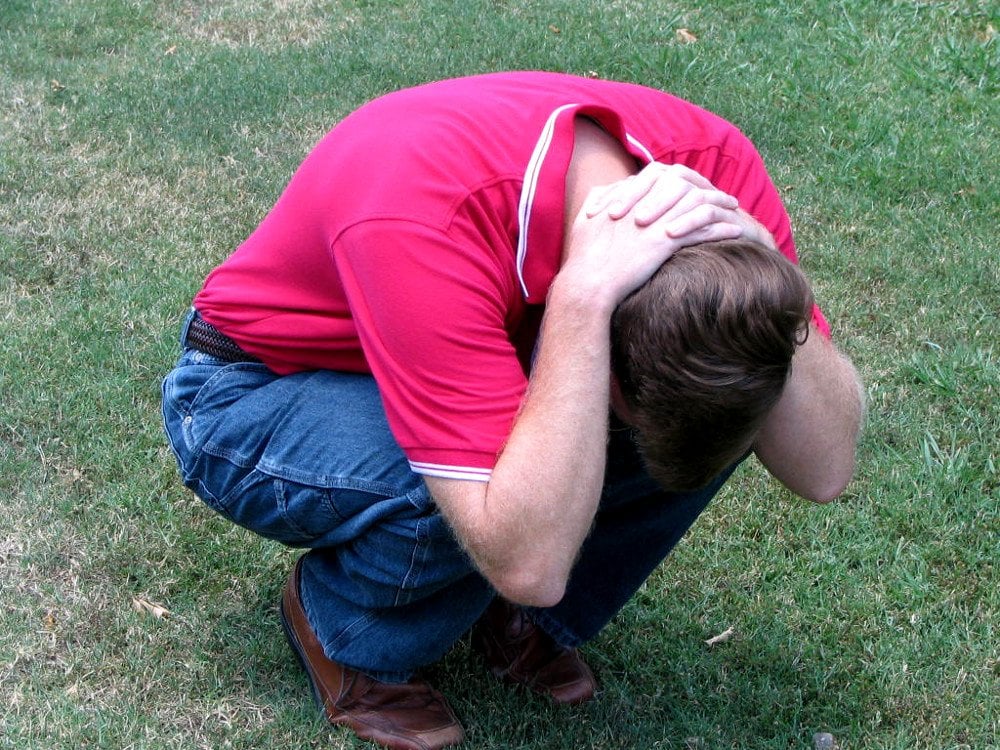 Crouch position with the ears  and head covered by hand

The aim of a crouched posture is to get close to the ground with minimal direct contact with the ground, i.e., only with your feet. It’s important not to touch the ground with your hands. Instead, cover your ears with your hands, because during a lightning strike, your ears would be highly vulnerable to damage; covering your ears can minimize any loss of hearing. Crouching down will not shield you entirely if lightning strikes, but it might contain the damage. Putting your head down, for example, would protect your brain from being the most likely strike point.

Using a medieval suit of armor and crouching down are theoretical remedies for surviving a lightning strike. However, when it comes to the real world, it’s better not to venture out in armor or stand in an open field during a lightning storm to check the veracity of these strategies. Whenever there is lightning, you should stay indoors within a safe shelter.

The Federal Emergency Management Agency (FEMA) recommends that people follow the 30/30 rule when a thunderstorm is approaching.

The rule is: if it takes less than 30 seconds to hear thunder after the flash of lightning, it is a harbinger of lightning striking nearby. This should signal you to seek shelter and wait for at least 30 minutes after the last clap of thunder.

However, bear in mind that transitory structures like sheds, dugouts, or bus shelters do not offer tangible protection against lightning strikes. Instead, find a substantial robust building with wiring and plumbing that will divert and channel electrons in the case of a strike.

If you’re caught in a jungle and can’t find a tangible structure to take shelter in, try to huddle inside a dense population of small-sized trees. Remember, tall trees are more likely to be hit by lightning and may even explode!

Once at home or safe indoors, do not use your telephone. If the telephone line is struck by lightning outside, there is a theoretical possibility of the current traveling through the same line right to your telephone.

The bottom line is not to take any chances with a lancing bolt of lightning. The odds of being struck may be one in a million, but it’s better not to be that one. Stay at home during thunderstorms and enjoy the remarkable display of nature’s fury from a safe distance!

How much do you know about the right posture during lightning strikes?