Imagine having an identical twin (kudos if you don’t have to imagine!), which implies that both of you are nearly exactly the same age. Now, what if I told you that one of you could stay young, while the other would age much more significantly. A highly improbable situation, you would probably say! Well, let me be the first to tell you that it IS possible and has even been scientifically verified. Now, let’s look at how this “twin paradox” plays out. 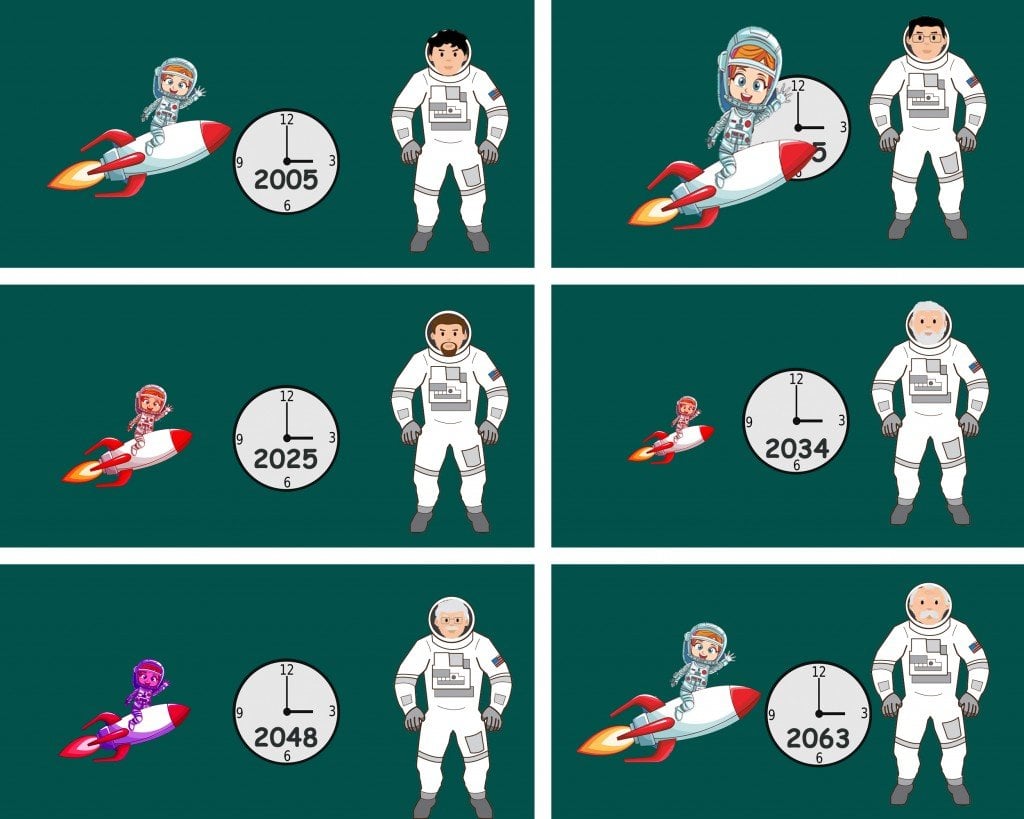 Differential aging due to time dilation

Let’s assume that there are two twins, Humpty and Dumpty. Both have just turned 20 years of age. Now, Humpty manages to find a rocket that can travel close to the speed of light. Knowing that with such a fast rocket he will be able to travel vast distances across the Universe, Humpty sets off on a space exploration!

Humpty begins by traveling in a straight line at relativistic speed v at some distant location. He then slows down and turns back to return to her twin. Now, both Humpty and Dumpty have clocks with them. Dumpty observes that on the outward and return leg of the journey, Humpty’s clock progresses slower. On his outward and return voyage, Humpty sees Dumpty’s clock move slower. Each concludes that the other is going to age less than them. This is where the paradox occurs, but we can prove scientifically that one twin does, in fact, age more significantly. 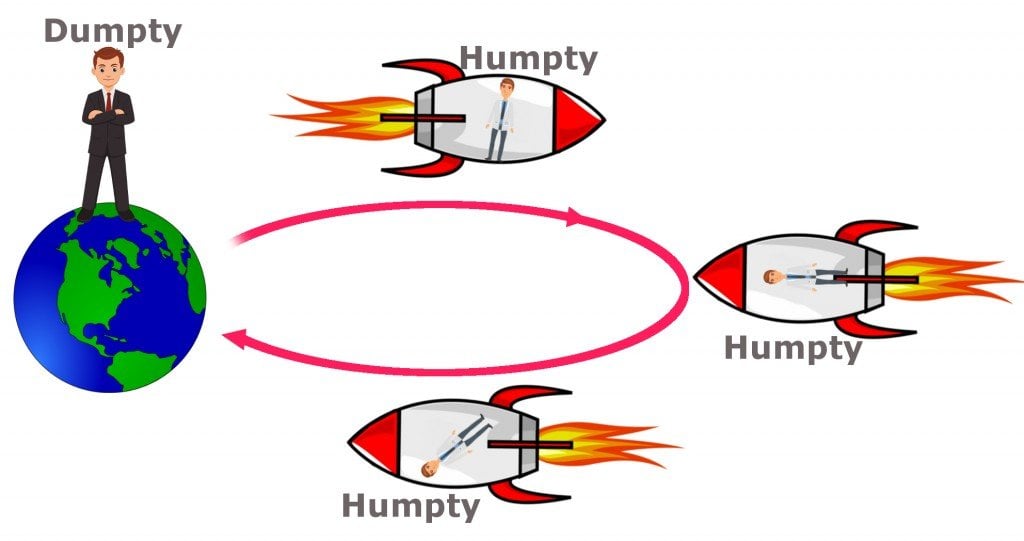 The twin paradox is one of those problems that encase within it a beautiful solution (or might I say, answer). It is a problem that involves relativistic time dilation, from the special theory of relativity (the jargon might seem tough, but the solution is quite intuitive).

Now, the first step towards finding the solution is assuming that we can keep track of both twins’ clocks. The twins themselves can keep track of one another’s clock from their respective places.  Next, we take into consideration that the clock ticks only once per year, solely on the anniversary of the separation of the twins. Both can also send an anniversary wish to one another in the form of an electromagnetic pulse. Note: the light from the telescope and the electromagnetic signal they send travel at the same speed.

Now, if we’re to draw a spacetime graph for both Humpty and Dumpty, we would get the above graph. From the above, we will find three frames. The graph on the left contains Dumpty’s single frame of reference. On the right, we have two frames of references for Humpty’s outward and return journey frame. Note: the protruding lines represent the return journey coordinates.

Let’s first complete the calculations from Dumpty’s frame of reference. Let’s assume that the length of Humpty’s journey is 2.67 light-years for one leg of her journey. Now, as we know the distance and speed at which Humpty is traveling, we can calculate the time of the journey to be 4 years (2.67 light-years/ 0.66c).  So, from Dumpty’s perspective, the trip time for Humpty would actually be 8 years.

Now, if we were to calculate from Humpty’s frame of reference, we would have to multiply the distance of her trip with the Lorentz Factor. You can learn more about Lorentz Transformation in the article here.

Also Read: Why Does Time Slow Down In A Moving Vehicle?

By plugging her velocity (0.66c) into the above equation and taking the inverse of the value, we get a new factor of 0.75. Now, this 0.75 multiplied by the distance of 2.67 light years, according to Dumpty, we get approximately 2 light-years (to be more precise, it’s 2.0025 light years). Now, if we’re to divide the distance of 2 light-years with the speed at which she is traveling (0.66c), we get 3 years on each leg of the journey.