Grinding one’s teeth can be a symptom something larger. It may be caused by a condition called sleep bruxism, stress, teeth misalignment, or even gastrointestinal disorders.

When we chew our food, the biting surfaces, also called the occlusal surfaces of the teeth, touch each other and functional grinding of the teeth takes place in the process.

However, the grinding of teeth that is more worrisome is not the one that occurs for a functional purpose, i.e., eating and swallowing. Some people grind their teeth in anger, and in fact, mentions of such angry grinding are seen in verses of the Bible! The even more worrisome grinding is seen in people while sleeping or in moments of stress or anxiety; this is called bruxism. 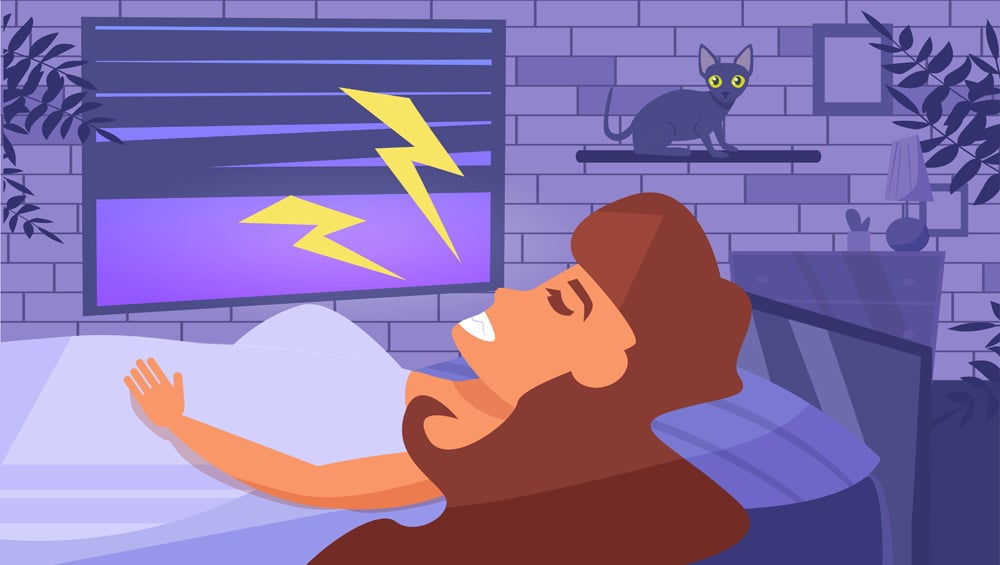 My teeth talk while I sleep! (Photo Credit : Anna Violet/Shutterstock)

The term bruxism comes from the Greek word “brygmós”, which means gnashing of the teeth, and refers to non-functional or para-functional grinding of teeth.

Bruxism or grinding of the teeth is one of the most destructive dental disorders, and since it often occurs on an unconscious level during sleep, it holds a high place in the list of sleep disorders, coming right after sleep talking and snoring.

Bruxism is more commonly seen in younger age groups and reduces with age.

Why Do You Sometimes Feel Energetic At Night But Lazy During The Day?

Why do we grind our teeth?

The reasons for grinding our teeth can range from dental issues to physiological or even psychological reasons. Often, many of these factors are present together and may lead to bruxism of varying intensities in different individuals.

Grinding in an awake state is called awake or daily bruxism, and is often due to work pressures or daily life stress triggers. Grinding that occurs during sleep is called sleep bruxism.

This nocturnal act often goes unnoticed by the bruxer themselves and is more apparent to the sleep partner of the individual, due to all the clattering and grinding noises made by the bruxer.

When we sleep for long periods, our sleep follows patterns of deep sleep and light sleep cycles. During the transition from deep sleep to light sleep, we exhibit bodily responses, ranging from limb movements and increased heart rate to increased muscle activity; this is called an arousal response.

Emotional stress is another major trigger for bruxism and the anxiety manifests physically as grinding of the teeth.

Caffeine is known to stimulate the central nervous system, which may increase anxiety and stress in an individual, and may end up triggering grinding episodes.

The way your teeth are positioned in your jaw and how your upper jaw coincides with your lower jaw also contribute to bruxism. For example, imagine that you’ve gotten a new filling done for a tooth in your lower jaw. You come home to find that the filling is a little high, such that when you close your mouth, it touches its opposing tooth in the upper jaw first. This is an example of premature or early contact.

Now, if the filling isn’t too high and you can manage to make all the other teeth in the upper and lower jaws touch each other by slightly shifting the way your jaw closes, then you have a case of deflective interference. It’s almost like trying to fit a piece in a jigsaw puzzle.

Due to a manufacturing defect, if one piece of the puzzle is slightly altered and the fit-in mechanism isn’t smooth, there will be constant friction every time the pieces are put together. 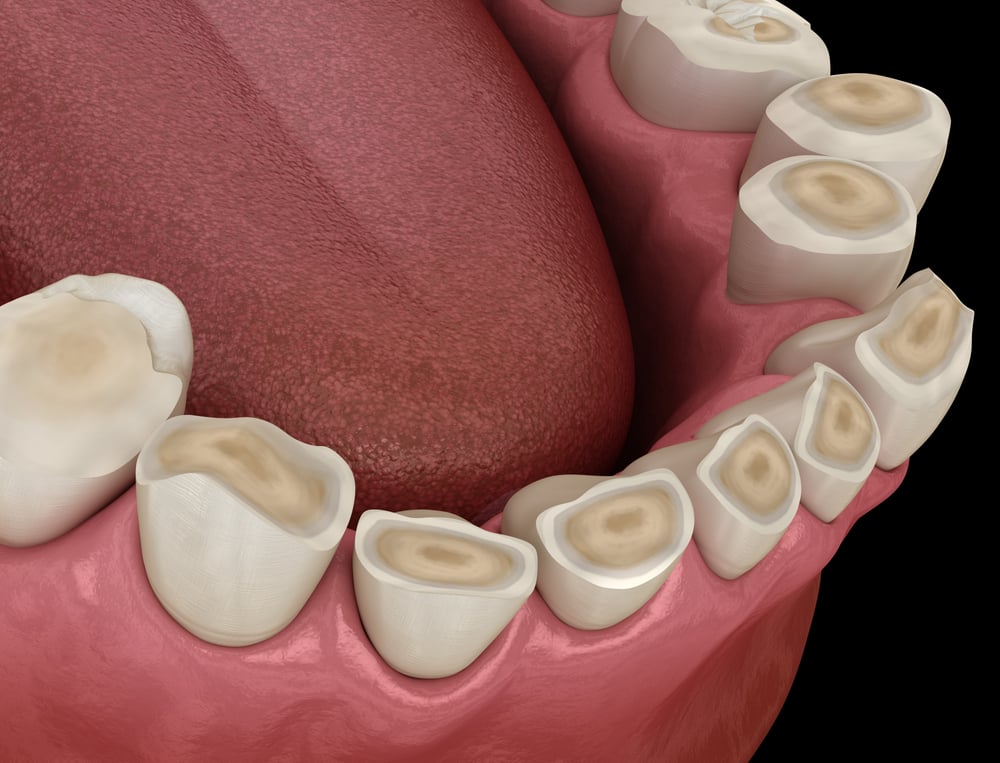 Teeth are saying “Constant friction ‘coz of all the grinding cuts me in half” (Photo Credit : Alex Mit/Shutterstock)

This friction is eventually going to damage the other puzzle pieces. The common tell-tale signs of grinding are the presence of abnormally worn out teeth or fillings, fractured teeth, recession of the gums, and generally poor health of the gums, muscle pain, and jaw joint pains. Other factors, like the presence of dental cysts, atypical eruption of milk and permanent teeth, may also result in a bite that puts excessive pressure on your opposing teeth and underlying structures; this type of bite tends to favor grinding.

Systemic factors, such as gastrointestinal disorders, Down syndrome, mental retardation, or consuming drugs for epilepsy or other mental health issues also tend to predispose someone to bruxism.

What is the mechanism of grinding?

For any movement to take place in our body, the cerebral cortex in our brain fires orders to the basal ganglion situated in our brain. The basal ganglion carries out these movements smoothly with the help of well-synced direct (excitatory) and indirect (inhibitory) pathways. Any disturbance or imbalance in these pathways triggers abnormal movements, including grinding of the teeth.

Once bruxism is triggered, the actual action is brought about by the muscles of mastication (muscles that make our jaws work). Temporalis and masseter muscles bring about the opening and closing of the jaws, while the lateral pterygoid muscles causes side-to-side movement.

When this muscle system is triggered and bruxism sets in, the strength of the force with which the opposing teeth collide is about three times greater than the normal chewing force! 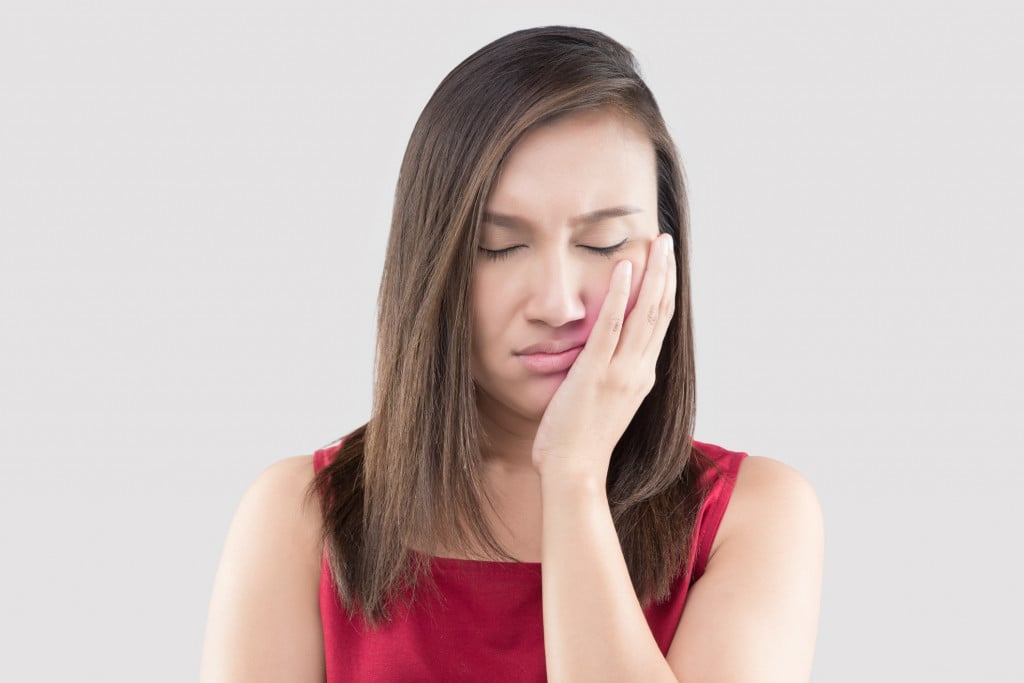 OUCH! Why does it hurt like a bomb exploded inside my mouth? (Photo Credit : twenty20)

An impact of that magnitude is bound to have repercussions on the teeth, fillings, implants, jaws and the joint that connects the skull to the lower jaw bone, also known as the temperomandibular joint. The damage is not limited to dental structures; bruxers often report headaches, earaches, ear infections, dizziness and stress, amongst other issues.

Grinding of the teeth stems from multiple factors and often manifests itself in various signs and symptoms, not necessarily limited to the mouth. Someone might have ear pain, headaches, or a sleep disorder and still be a bruxer!

Even though the cause of bruxism might be blurry, more often than not, it’s the dental apparatus (our teeth and mouth) that takes a beating in bruxism. It’s safe to ignore your sleep partner’s grievance about the snoring, but be sure to head to the dentist if your sleep partner says your teeth make too much noise at night!