How cool is it to change your state? Freeze me; I am ice. Heat me; I am water. Boil me; I am steam. I have different forms and states: I am Matter! 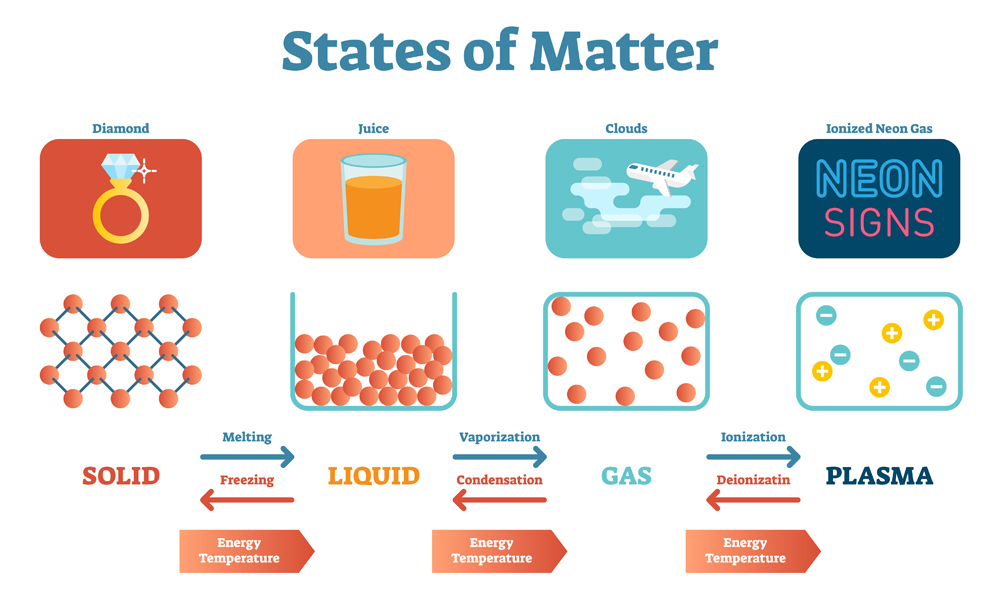 The versatility of ‘Matter’

Simply put, the definition of matter is something that carries mass and occupies space. There are four fundamental states of matter: Solid, Liquid, Gas, and Plasma. 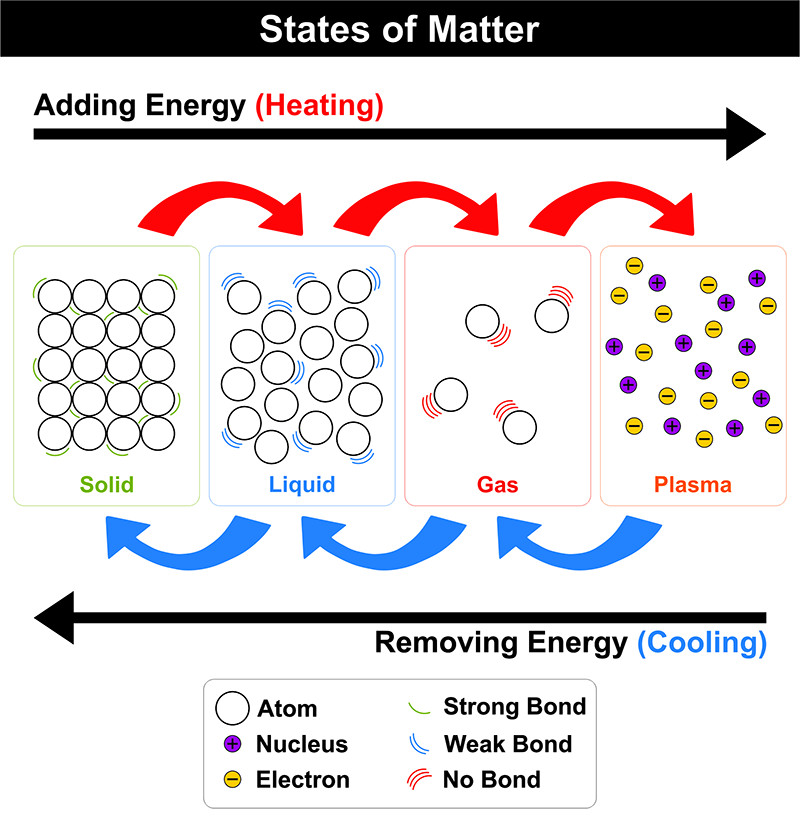 Solids: These are rigid and incompressible with a definite shape and volume. Strong inter-molecular forces hold the molecules together with no or negligible inter-molecular spaces. The molecules in solids have low kinetic energy and low vibrational energy. Solids can exist in two forms: crystalline or amorphous. Solid carbon exists in a crystalline form as diamond, and in amorphous form as charcoal.

These are fluidic, have a definite volume, no definite shape (takes the shape of the container), and are incompressible. Moderate intermolecular forces hold the molecules together with weak intermolecular spaces. The molecules in liquid move with moderate kinetic energy. Liquids possess properties of capillary action, viscosity, and surface tension. 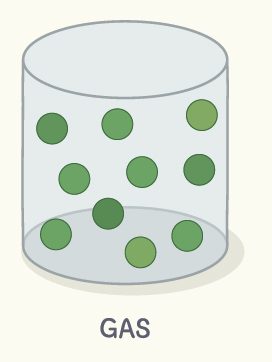 These are also highly fluidic, have indefinite shape and volume, and are easily compressible. The intermolecular forces in a gas are very weak and the intermolecular distances are large. Thus, gases are free-flowing, and the molecules in a gas move with high kinetic energy.

The most abundant state of matter in the universe is plasma or superheated matter. 99% of the matter in the Universe is in the plasma state. When energy is passed through neutral gas, the electrons are removed to form both positively and negatively charged ions. It has neither shape nor volume. Plasma makes up the sun and stars. 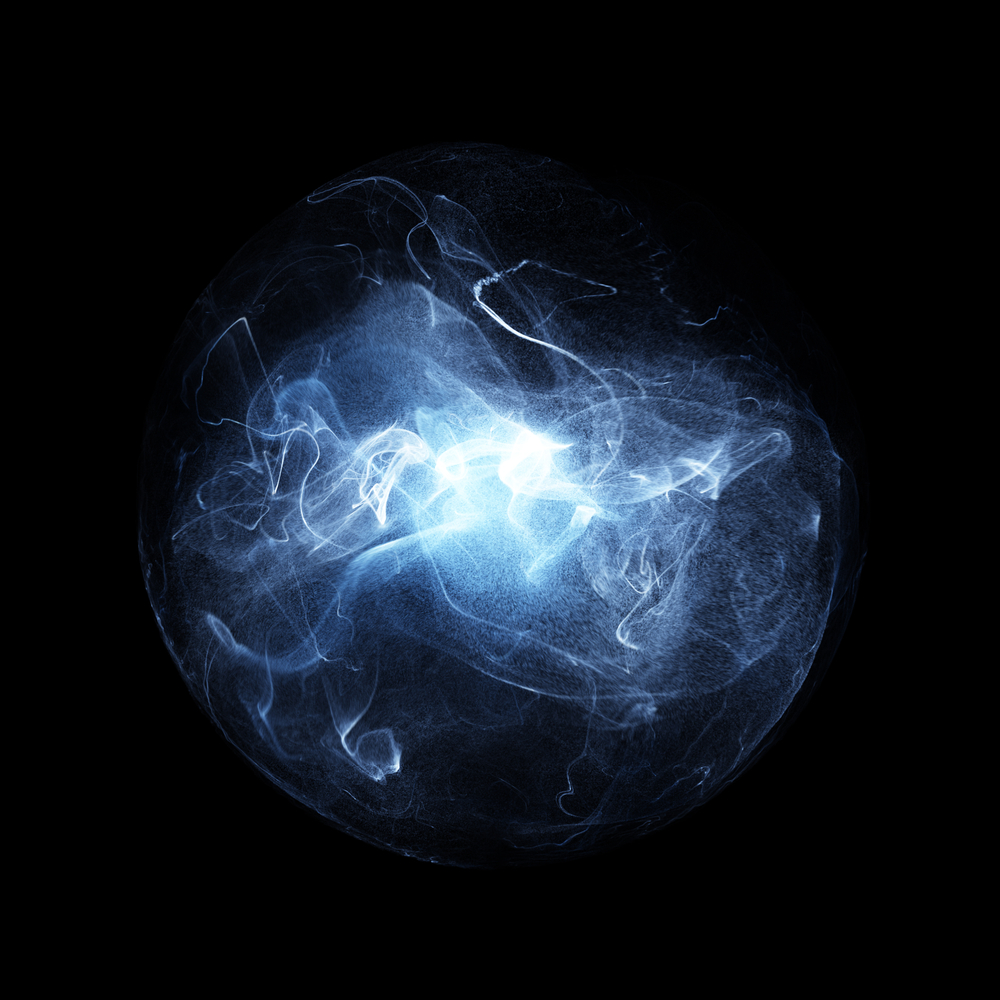 What determines the state of Matter?

Matter has a specific state at a given temperature and pressure. The two factors that regulate its state are:

Understanding the effect of temperature on the States of Matter

At atmospheric pressure, water exists as a liquid at temperatures between 0ᵒC to 100ᵒC, as water vapor (gas) beyond 100ᵒC, and as ice (solid) at 0ᵒC and below. The temperature ranges in which substances exist in a particular state vary for each substance. We know that water has three states, but what about other elements and compounds? Do iron, oxygen, and calcium chloride exist in three states? The emphatic answer is: “All matter exists in different states, depending on the temperature and pressure”. From the above, oxygen is a gas at > -182ᵒC, while iron is a gas at 2860ᵒC. All matter can exist in the three states, but the temperatures at which they attain each state vary broadly.

Charles’s Law states that the volume of a fixed amount of gas is directly proportional to its absolute temperature if the pressure remains constant. 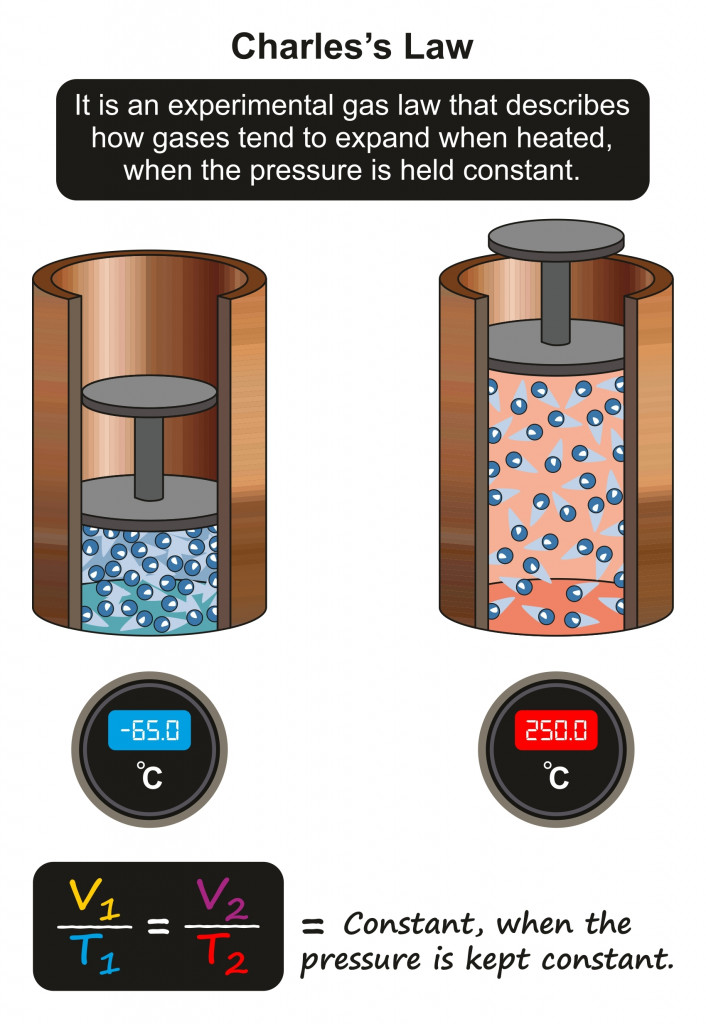 At constant pressure, if the temperature of a solid (i.e., ice) is increased, its volume correspondingly increases. With the increased volume, molecules move farther, increasing the inter-molecular distance, and thereby decreasing the intermolecular forces. When this happens, the solid ice slowly undergoes a phase transition to liquid water. A further increase in temperature will proportionally increase the volume, making the molecules move farther away from each other. This increases the intermolecular distance, and decreases the intermolecular force of attraction, thus causing the shift from water (liquid) to steam (gas).

Understanding the effect of pressure on the States of Matter

As mentioned earlier, pressure is another critical factor that determines the state of matter. This principle is used in the manufacture of liquid N2 and dry ice (solid carbon dioxide). Gaseous Nitrogen will become a liquid when pressure is increased on the gas. On the other hand, you can make water boil at room temperature by decreasing the pressure enough. So, pressure and temperature are in an inverse relationship. Liquid N2 and dry ice are manufactured by applying pressure on the gases N2 and CO2 to change their state from gas to liquid and gas to solid, respectively. 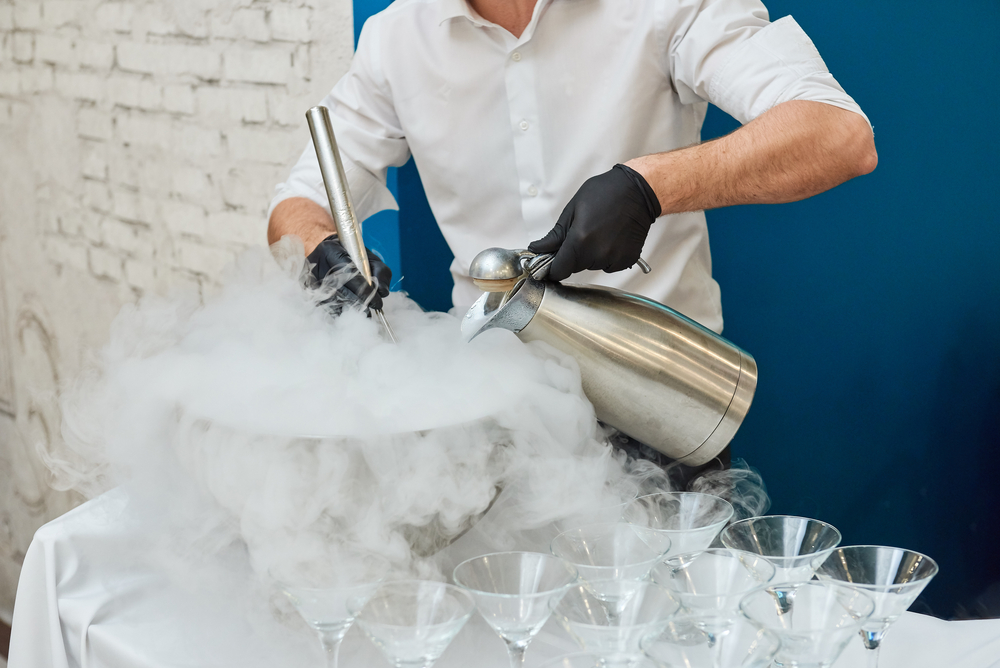 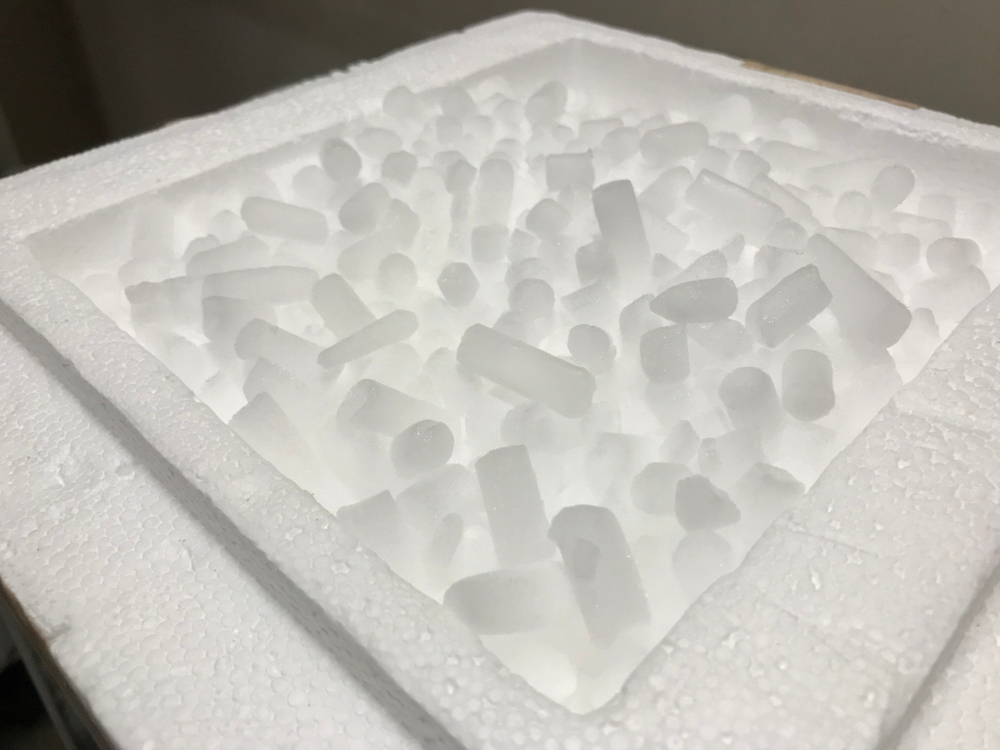 As mentioned earlier, there is an inverse relationship between pressure and temperature, which is governed by Boyle’s law. According to the law, the volume of a gas increases as the pressure decreases, at a constant temperature. 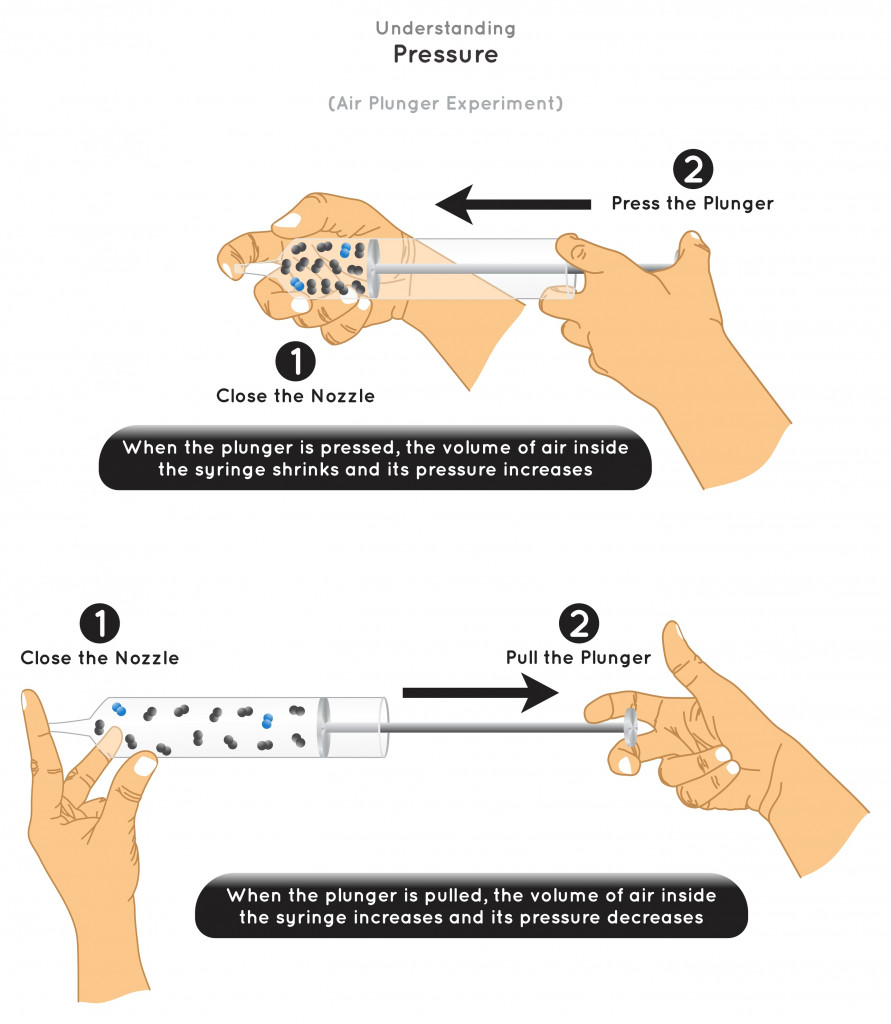 From the above illustration, we observe that the pressure and volume of a gas are inversely proportional. When the pressure is increased, the volume decreases, bringing the molecules closer together. This increases the intermolecular force of attraction and decreases the intermolecular distance. This will promote the transition from a gaseous to a liquid state. A further increase in pressure reduces the volume even more, thus transiting liquids into solids.

How is dry ice formed?

In dry ice manufacturing, the pressure on CO2 gas is reduced from 1 atmospheric (1 atm) to 5.11. At this pressure, and at a constant -56ᵒC, gaseous CO2 becomes solid CO2 with a very transient liquid state. The specific temperature and pressure at which three states of any matter are in equilibrium is called its triple point. 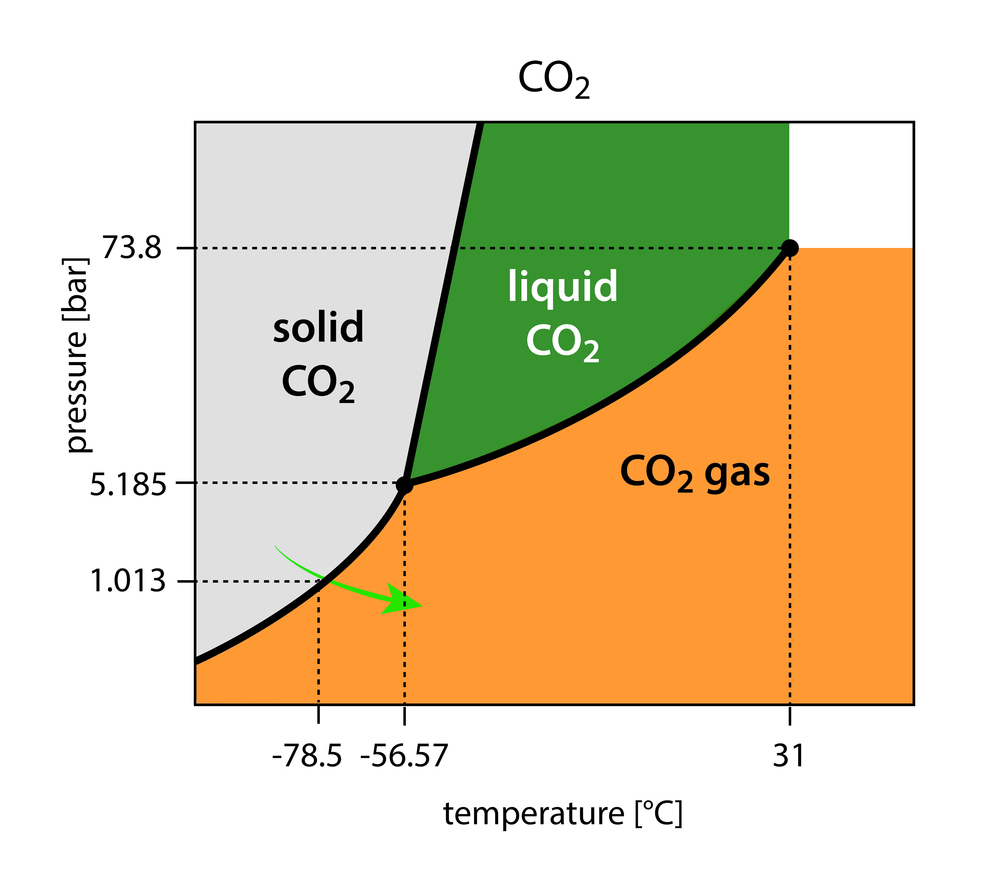 Triple point: The temperature and pressure at which the solid, liquid, and vapor phases of a pure substance can coexist in equilibrium (Photo Credit : magnetix/Shutterstock)

A slight decrease in temperature will phase transform gaseous CO2 to solid CO2.