A chemical reaction is the essence of chemistry. Two or more chemicals react together to produce an entirely different product. In inorganic chemistry, there are four main types of reactions. These are combination, decomposition, single-displacement and double-displacement reactions.

Likewise, in organic chemistry, reactions are classified based on their mechanism. These three categories are Ionic, Radical and Pericyclic. You might have heard of the other two, but what about pericyclic reactions? How do they happen?

What is a pericyclic reaction?

The word ‘peri’ means around, and ‘cyclic’ means circle. Thus, a pericyclic reaction refers to the continuous flow of electrons with π -bonds in the cyclic transition state (TS). The bond-breaking and bond-forming processes take place in concert, without forming an intermediate.

For the reaction to be pericyclic, a concerted system of bond formation is necessary. The bond-breaking and bond-forming take place at the same time, but not necessarily to the same extent or at the same rate. In most cases, the π-bonds enter the cyclic transition state.

The Diels–Alder reaction is an ideal example of a pericyclic reaction. In this reaction, acrolein (diene) and Methyl vinyl ether (dienophile) react together to form Glutaraldehyde. Here, three π-bonds break and form two σ-bonds and one π-bond in the product.

What are the types of pericyclic reactions?

Based on the stereochemistry of the reactants, the product of the same electron system may differ in electrocyclic reactions.

In cycloaddition reactions, two or more components with π electrons react to form a ring. Each reactant loses a π-bond to create two new σ-bonds, which close the ring. The resulting cyclic product has two σ bonds and one π-bond.

Diels-Alder reaction between buta-1,3-diene and ethene

In the above reaction, buta-1,3-diene (diene) reacts with ethene (dienophile) to produce cyclohexane. The Diels-Adler reaction is a cycloaddition reaction. The reactants join through a cyclic transition state to break the π-bonds of diene and dienophile and form two σ-bonds simultaneously.

A concerted rearrangement involves shifting electrons linked by a σ-bond to the terminal π-bond electron. This reaction is known as a sigmatropic rearrangement. It is because the σ-bond appears to move within the electron system during the reaction. The number of π and σ bonds remains unchanged.

The reaction is characterized by the double number system, i.e., [i,j]. The first number indicates the original position of the σ bond and, the second number denotes the new position of the migrating σ bond. For example, the [1,5] sigmatropic rearrangement.

In this reaction, the migrating atom linked by a σ-bond to allylic carbon is numbered-1. The migrating atom-1 shifts to atom-5 of the alkenyl chain. Thus, the reaction is known as a [1,5] sigmatropic rearrangement.

As the name suggests, this is a reaction in which one or more atoms or groups transfer from one molecule to another. The molecule is linked by a σ-bond. They might appear similar to sigmatropic reactions and cycloaddition reactions. However, it is a bimolecular reaction and does not lose a π -bond to form a ring by σ-linkage.

There are two kinds of group transfer reactions: ene reactions and diimide reductions. In an ene reaction, the alkene having an allylic hydrocarbon (ene) undergoes a thermal reaction with an enophile. Enophiles are compounds containing multiple bonds. In this reaction, the hydrogen atom of allylic carbon migrates from the alkene to the enophile.

The π-bond of the enophile gets replaced by two σ bonds with an alkene.

Diimide reduction is another type of group transfer reaction. In this reaction, an unsaturated hydrocarbon reduces to form an alkane by reacting with diimide (H2N2). During the reaction, diimide gets oxidized to form nitrogen (N2).

Theories that Predict the Pericyclic Reactions

In 1965, Robert Woodward and Roald Hoffmann proposed the principle of Conservation of Orbital Symmetry. It states that in concerted reactions, the orbital symmetry remained conserved. This is also known as the Woodward-Hoffmann rule. 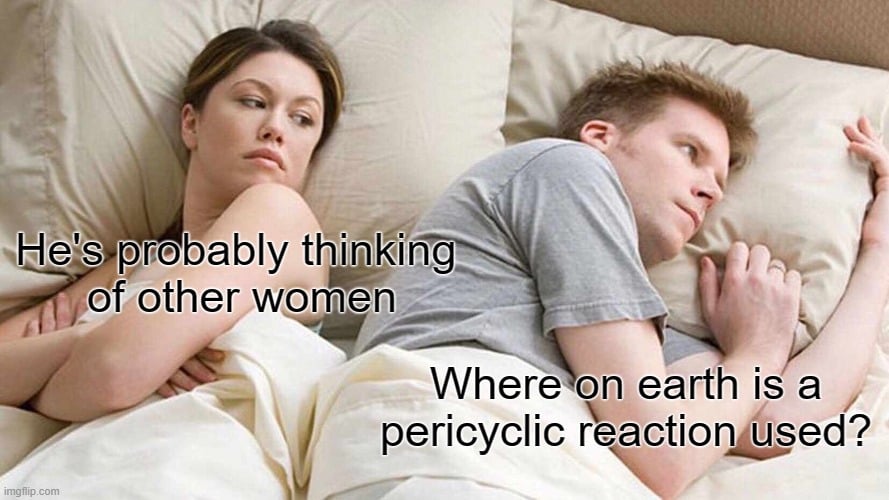 Pericyclic reactions have a significant role in several life processes. For example, chorismate in Escherichia coli undergoes a cycloaddition reaction to form prephenate. A [1,7]-sigmatropic reaction occurs in the epidermis to synthesize Vitamin D. Thus, studying pericyclic reactions can increase our understanding of the biochemical processes in various organisms.