Discussing the science behind the death-defying motorbike stunt; Wall of Death. How does the rider manage to stay on top while tracing a circular path on a vertical wall?

If you’ve ever been to a carnival boasting a number of death-defying stunts with vehicles, such as a motorbike rider jumping over an array of trucks parked next to each other, or another daredevil jumping through a circle of fire, then you probably know (or have at least heard of) The Wall of Death. To fully understand this amazing spectacle, let’s take a look at the science behind this wild stunt that is often performed by motorcyclists.

What is a Wall of Death?

A Wall of Death is a carnival show featuring a wooden cylinder that is 20 – 36 feet in diameter. Inside the cylinder, a motorcyclist (or a driver with any other automobile, like a car) rides along the vertical wall of the cylinder and performs various stunts while doing so. A Wall of Death is known by many other names too, such as a motordrome, silodrome or Well of Death. 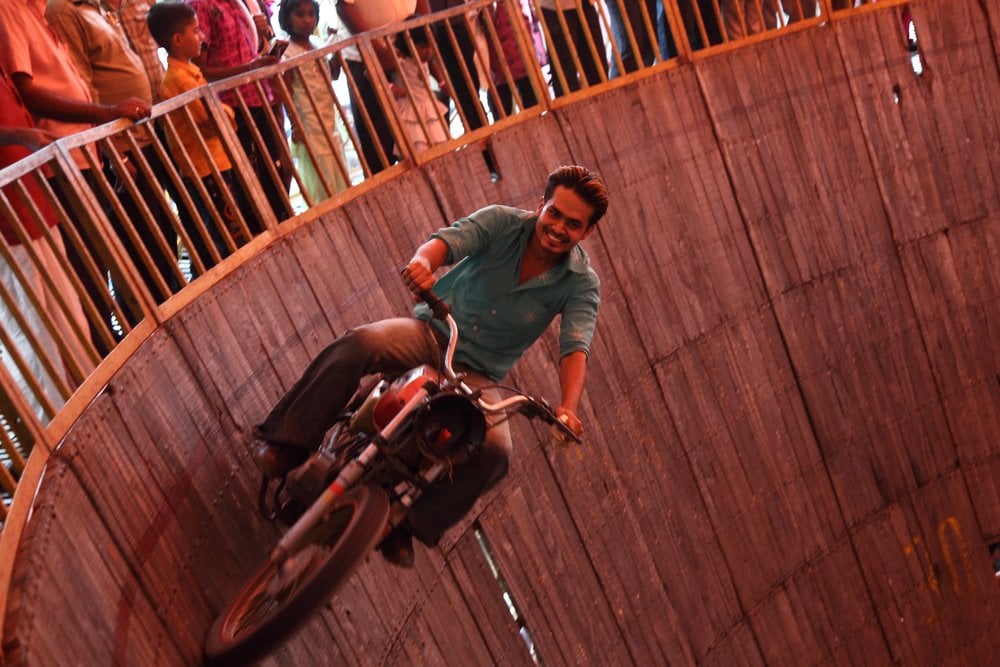 The most obvious appeal of this stunt is the fact that the rider is speeding around on a vertical path without falling. People who have a phobia of two-wheeled vehicles know precisely how difficult it is to ride a bike on a flat road, let alone one that is perpendicular to the ground. In other words, this stunt makes for a thrilling display.

Science Behind the Wall of Death

Now, put your physics caps on so that we can delve deeper into this cylindrical mystery.

When a bike moves on the walls, there are a number of forces in play. These include the gravitational force, which acts downward from the bike to the walls, the frictional force that the walls exert against the tires of the bike, and the normal reaction force, a perpendicular push back by the wall surface when it receives a force. There is also centripetal force, which is directed towards the center of the circular path that the bike traces.

For a bike moving in a horizontal circle on a vertical wall, the normal reaction (N) is the factor that supplies enough force to sustain motion in a circle. Also, the fact that the bike does not slide down the wall signifies that the forces of friction and gravitation balance each other out (as shown in the figure above).

In short, the two forces, the gravitational force and the force of friction, act in opposite directions and compensate each other, while the normal reaction from the wall is what keeps the bike moving.

However, it’s not that simple. The frictional force exerted on the tires of the bike depends on the speed of the bike as it moves along the circle. This means that there has to be a minimum velocity of the bike that produces the maximum frictional force, effectively balancing out the gravitational force. This is crucial, because if the gravitational force is greater, then the bike will slide down and the rider will fall off. The friction becomes stronger as the speed increases, but with increasing speed, it becomes more and more difficult for the rider to steer the vehicle safely.

The above system of forces holds true and stays in equilibrium if we’re talking about a point mass, or rather, an object whose entire mass is concentrated in a single point. In such a case, all the forces are acting on that single point. This, however, is not the case with a motorbike. The frictional force is acting on the tires, but the gravitational force is acting through the center of mass of the system consisting of both the bike and the rider. Since the three forces are balanced, but do not lie in the same line, the bike will tend to rotate, producing a turning effect that will eventually lead to it fall off. This anomaly has to be compensated for in order to keep these brave riders safe!

Leaning is the secret

In order to counter this dangerous turning effect, the rider has to lean at an angle away from the vertical. This will make the normal reaction from the wall produce a tendency to rotate (a torque) in the opposite direction. If the rider bends at the correct angle, the torques will be perfectly balanced out; therefore, there will be no rotating or turning effect on the bike and the impressive display can continue.

However, if the rider leans at an angle other than the correct one, then the unbalanced torques will cause the bike to rotate and fall. Therefore, the rider will have to push harder in the opposite direction to supply extra torque and maintain his balance.

After hearing all that, you may have a very different experience next time you’re at a carnival or a motorbike show. What looks like an impossible, death-defying stunt is actually a complex set of forces and torques working together in harmony. Of course, the skill and guts of the rider flying around that cylindrical ride plays a big part too!