The Law of Independent Assortment states that the alleles of two or more genes separate independently of each other during gamete formation.

In 1856, Gregor Mendel, an Austrian monk with a scientific drive, began his experiments on heritability. He chose the humble pea plant to study how certain visible traits, such as the color of the pea (yellow or green), the color of the flowers (purple or white), and the plant height (tall or short) would be passed on to the little pea offspring.

After rearing thousands of pea plants—28,000 to be precise—and assiduously documenting every outcome, Mendel released his work to the public.

His work was initially ignorned, but a generation later his work was rediscovered, and it gave us the foundation of modern genetics–Mendel’s three laws of Inheritance. 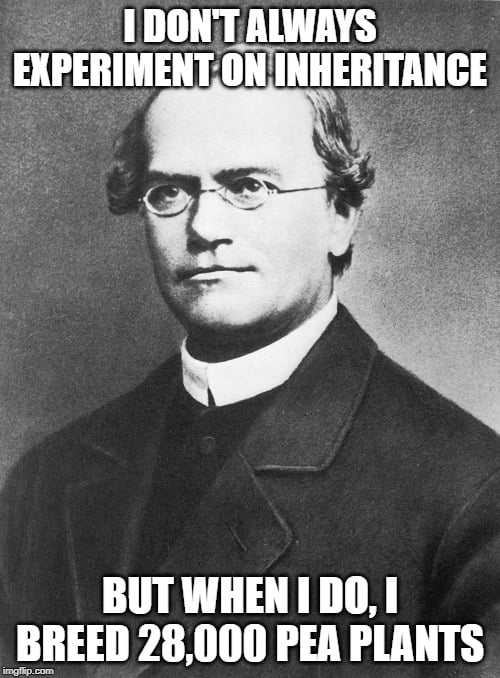 Gregor Mendel will very thorough and meticulous with this work

What are Mendel’s Laws of Inheritance?

These are laws that describe how traits are inherited by offspring from their parents. They help one predict which version of a trait an offspring will inherit.

For example, consider hair color. If one parent has dark black hair and the other has lighter blond hair, Mendel’s laws would help one predict what hair color their child would have, by calculating the probability – black or blond? Mendel played this predicting game with pea plants, rather than humans, as that might have got him in some ethical trouble… In Mendel’s paper, he proposed three laws of inheritance:

In three concise and elegant statements, they sum up Mendel’s research on plants. In this article, we will look at the Law of Independent Assortment. The earlier two laws can be found here and here.

The Law of Independent Assortment

This Law states that “the alleles of two or more genes separate independently of each other during gamete formation”.

To understand this law, let’s briefly look at the other two laws and provide some background information.

Mendel proposed the concept of a factor that controlled traits. These “factors” inside plant cells would segregate during gamete formation (the Law of Segregation). One factor could have more than one outcome.

For example, the color of the pea flower can have two outcomes, purple flowers or white flowers.

He noted that one of these types of factors is dominant over the other (the Law of Dominance). Purple flowers are dominant over white flowers. The dominant factor is signified by a capital letter, like P, while the recessive factor is noted with a lowercase version of the same letter, p.

Today, we know that these factors are called genes. Genes are long stretches of DNA that hold instructions for making proteins. A gene can have different forms, called alleles. These are the types of factors we mentioned earlier. The gene coding for flower color (or the enzyme that makes the flower color) can produce purple flowers or it can produce white flowers. 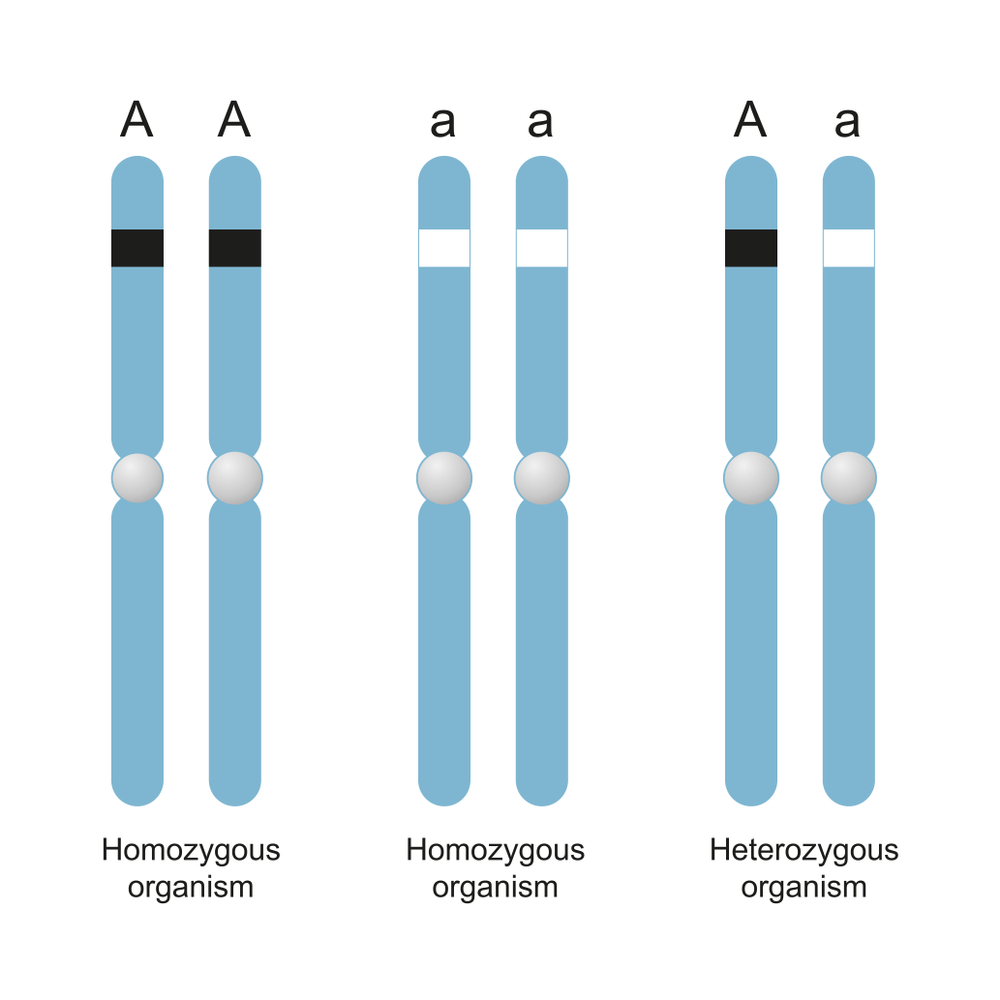 The combination of alleles that an organism has is called the genotype. The physical, measurable outcome is called the phenotype. In a heterozygous scenario, the phenotype (physical outcome of the trait) will be that of the dominant allele; a purple-flowered pea plant, in this case.

Initially, Mendel only experimented on single traits, keeping everything else constant. He then decided to see if one trait could influence the outcome of another.

Could the trait for pea color affect the shape of the pea, for example? Would he get the same ratios he had in his single-trait experiments?

Mendel started with two purebred pea plants, one with yellow round peas (YYRR) and the other with green wrinkled peas (yyrr). He crossed these and saw all-round yellow peas (YyRr). This was Mendel’s first generation of offspring. Hence, it is known as the F1 generation.

Now, Mendel crossed the F1 generation with themselves. The offspring from this generation are called the F2 generation, since they are the second generation.

This becomes easy to visualize through a Punnett Square: 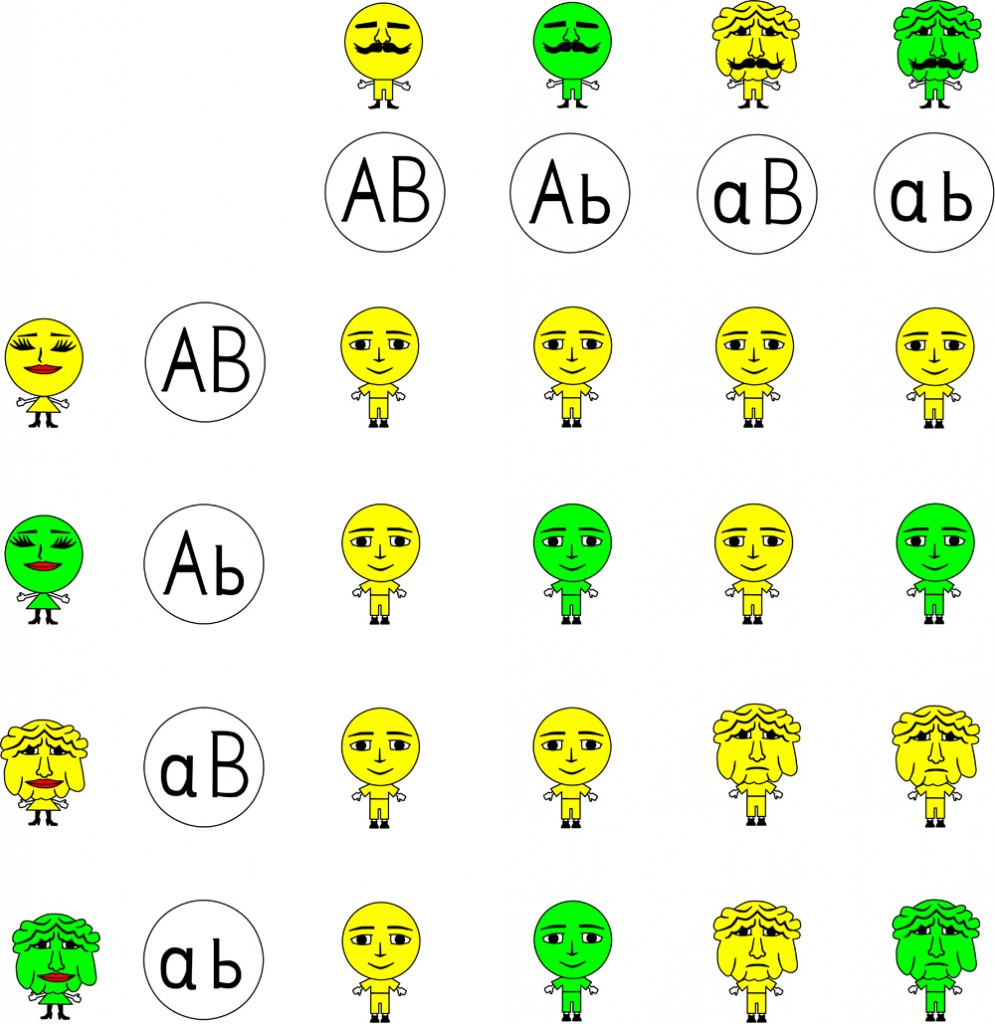 The Punnett square for the F2 generation. (change the letter from AB to YR) (Photo Credit : Sergey Merkulov/Shutterstock)

The genotype of the F1 generation is heterozygous, YyRr. If we follow the law of independent assortment, Yy alleles should separate independently from the Rr alleles. Therefore, there are two sets of factors—Y and y, and R and r. With these four factors, a gamete cell can have a combination of two, giving four different combinations within a gamete– YR, Yr, yR, yr. When a gamete with a Yr combination fertilizes a gamete with a yr combination, one would get Yyrr. This would result in a wrinkled and yellow pea.

The cellular meaning behind the Law of Independent Assortment

The discovery of the process of meiosis validated the Law of Segregation and the Law of Independent Assortment. Meiosis is a type of cell division that occurs at the time of gamete formation.

A normal cell has two sets of DNA, or chromosomes—one from their mother and one from their father. This cell is called a diploid cell. During gamete formation, the two sets are divided in half. Therefore, a gamete only has half the genetic information that a normal, autosomal cell would possess.

Putting this in terms of genes and alleles, each autosomal cell has a pair of genes, since they have two chromosomes, and there is one gene on each chromosome. The genes on the two chromosomes do not need to be identical. This is where the concept of alleles comes in. A cell will always have two alleles, since there are two genes. 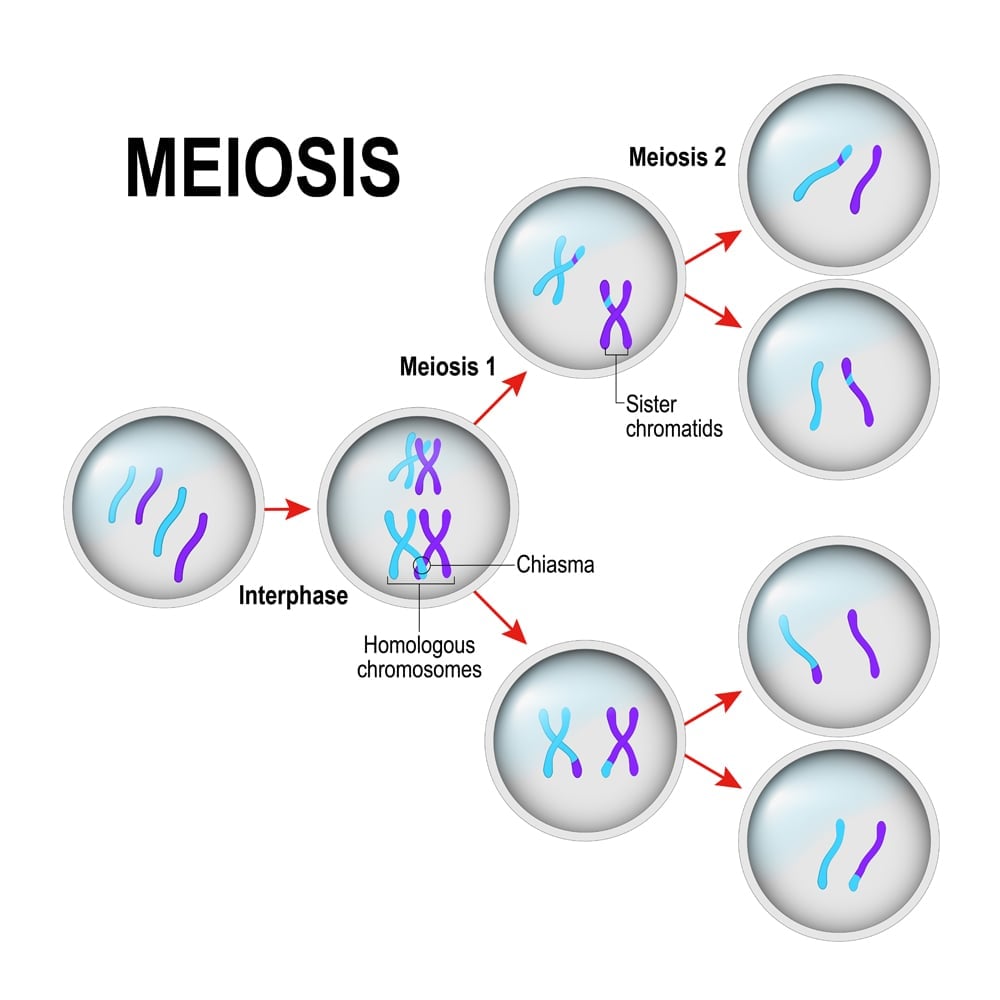 The process of meiosis validated the law of independent assortment (Photo Credit : Designua/Shutterstock)

Since a gamete only has half the DNA, meaning that it has only one chromosome, it receives only one allele. Which gamete receives what allele of a gene is purely random. This is the Law of Segregation.

Therefore, the gamete will get one allele of each gene. Which gamete gets what combination of alleles of the two genes is also completely random.

Does the Law still hold up today?

The Law of Independent Assortment doesn’t hold up in every case. There is a phenomenon called gene linkage, wherein two genes located close to each other on the same chromosome are inherited together. This would mean that the effect of those two genes would always be paired, since they will always be together. If the genes for pea color and pea shape were linked, then yellow peas might always be linked with round peas, since this combination might always be inherited by the plant together. 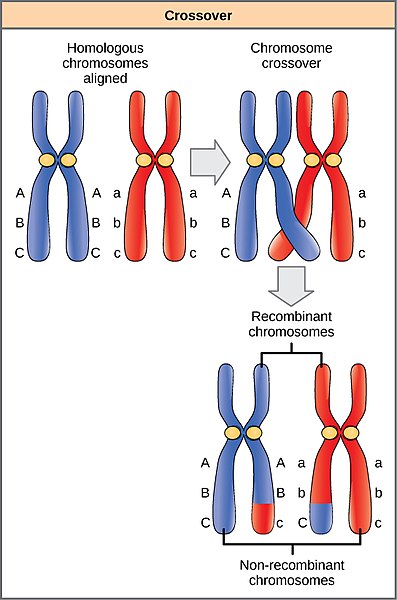 How recombination works: As one can see, the last gene C was switched between the two chromosomes. The blue chromosome, which was homozygous, is heterozygous after recombination (Photo Credit : OpenStax/Wikimedia Commons)

Mendel’s work on inheritance is a testament to the scientific process. Mendel performed rigorous experiments over the course of years with thousands of different plants. The true beauty and the reason for the lasting power of these laws is that Mendel backed up his observations with mathematics. He applied mathematical models to his work, which then informed his inferences.

While Mendel’s laws do not hold up in every aspect of biology, the fact that they hit the mark at a time when the concept of genes or DNA was rejected by the rest of the scientific community is truly remarkable!