A pH outside the conventional 0-14 range is possible, but various limitations caused by the instruments and the solution itself restrict us from measuring such a substance.

We often label water as a neutral solution with a pH of 7. Also, any solution that seems acidic is said to have a pH of less than 7, while one that is basic is said to have a pH greater than 7. However, what are these numbers and what do they tell us about the solution? Is it true that a solution can only have pH values in the range 0f 0-14?

What is the pH scale?

The pH scale is used to determine whether a substance is acidic or basic, and to calculate how strong a chemical it is. A pH value is a number that ranges from 1 to 14 for most common chemicals, with seven being the middle or neutral point. Values below 7 are indicators of acidity, which increases as the number decreases, while values above 7 indicate alkalinity, which increases as the value increases. One interesting thing to note here is that the pH scale is not a linear scale. In other words, an acid with a ph of 3 is not twice as strong as an acid with a pH of 6. An important distinction to understand is that the pH scale is a logarithmic scale. 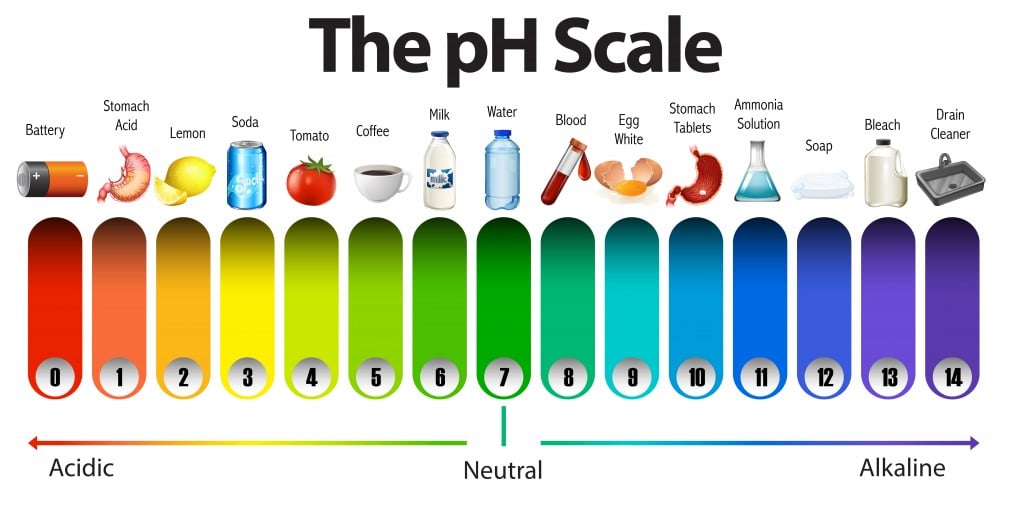 The formal definition of pH reveals that is simply a measure of the activity of hydrogen ions in a given solvent. Activity here means that their movement is free, which is only possible if the chemical has ionized, thus releasing ions into the solution.

The formula to calculate pH looks something like this: pH=−log10[Hsolvated].

What does the p in pH stand for?

The story behind the discovery of the pH scale is quite interesting. The concept of pH was first introduced by a chemist named Soren Peder Lauritz, who worked at the Carlsberg Laboratory in Copenhagen, Denmark. The first mention of this term looked something like this— p­H—a small p with an H in the subscript. 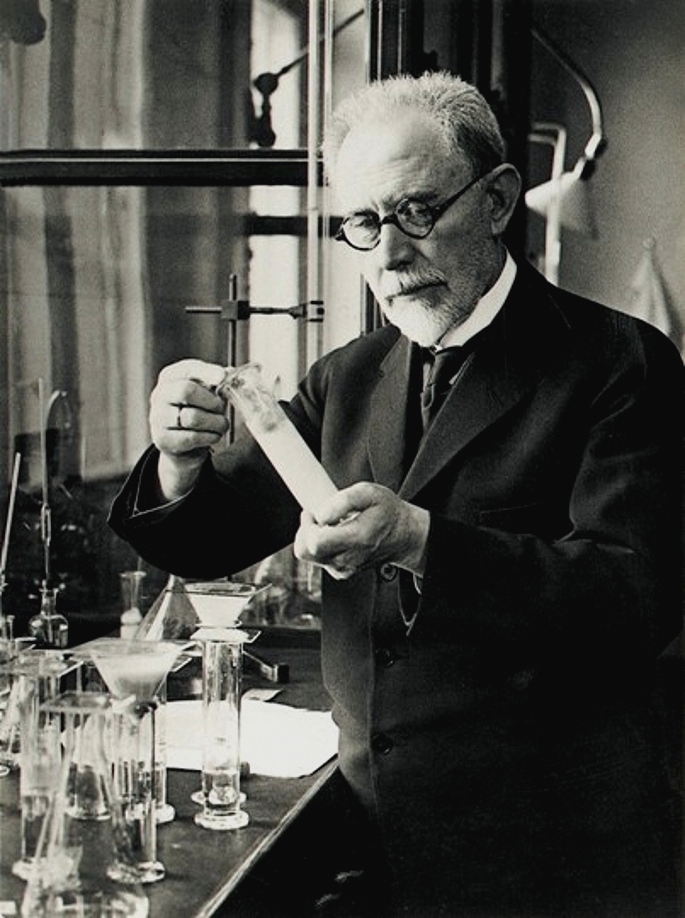 While the H represents the hydrogen ion concentration upon which the entire concept revolves, the exact meaning of the p is highly disputed. The scale basically measures a potential difference between different solutions by counting the negative power of ten. Both of these words—”power” and “potential”—start with p in all three languages (French, German and Danish) that Sorensen spoke and published his research in. Given that ambiguity, the meaning of the p remains one of the great mysteries in the field of chemistry, although not something overly critical to the concept itself.

Can we have pH values outside the 0-14 range?

Theoretically speaking, the pH scale should actually range from negative infinity to positive infinity. This claim is according to its definition, which states that the pH of a substance is the value defined by the negative logarithm of the hydrogen ion concentration. However, in reality, most solutions you would find in a standard laboratory have a pH value between 0-14. This is because, in order to reach pH levels below 0 or above 14, one would require extraordinarily acidic or basic solutions, respectively.

A saturated sodium hydroxide solution (NaOH) solution is supposed to have a pH of 15 based on its molarity. However, the chemical will not be able to solvate entirely due to the presence of water, which acts as a hindrance to the solvation (breakdown) of larger molecules. This will, in turn, result in a decline in the release of hydroxide ions (OH–), which are ions that absorb the hydrogen ions, increasing the pH of the solution.

Is a negative pH possible?

Achieving a negative pH rating is definitely possible. In practice, any acid that yields a concentration of hydrogen ions with molarity greater than one will show a negative pH when calculated. However, whether or not an acid actually has a negative pH value isn’t something that can be verified effectively in a lab. 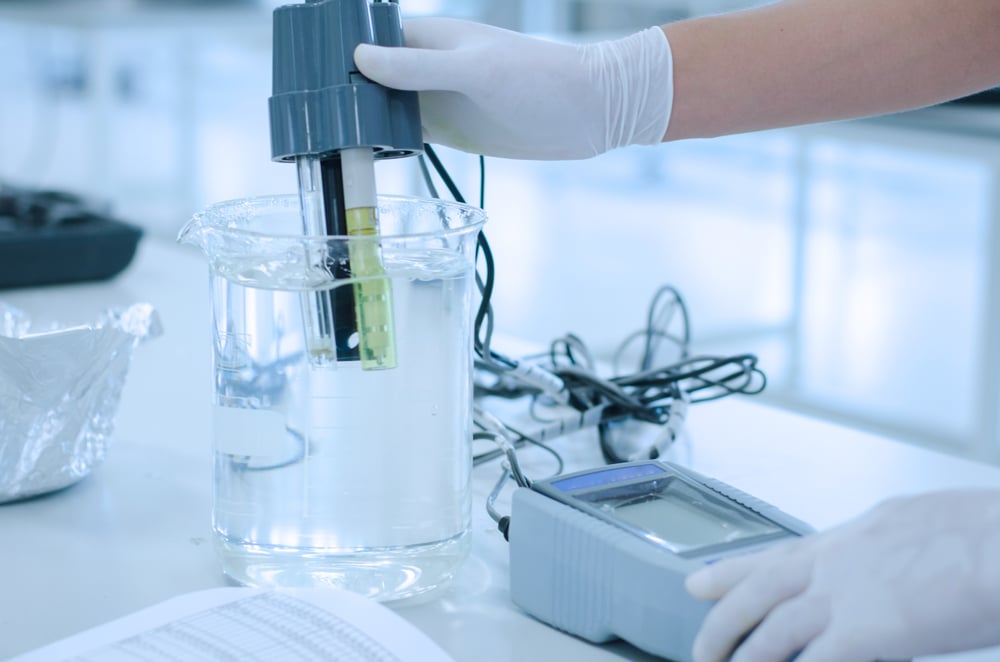 To put this in perspective, consider a 12 M solution of hydrochloric acid (HCL). This chemical should have a pH of -1.08, which is one unit above the standard pH scale, but we cannot measure it with any known instrument. Litmus paper (the most common means of measuring pH) only indicates whether the pH value is above or below seven. As such, pH meters are necessary to establish the actual value. However, even glass-electrode pH meters fail in such extreme tasks because of something called acid error, which causes even these highly advanced devices to measure a pH that is higher than the true value. Even if we improve the efficiency of these instruments and achieve “perfection” (which seems almost impossible), there is still one final problem—effective concentration.

What is effective concentration?

Strong acids never fully dissociate in water to release the number of hydrogen ions required to bring the meter of the device to a negative value. Accentuating this problem is the effective concentration of hydrogen ions, which is always less than the true concentration, as there is very little water per unit of acid in strong and concentrated acid solutions. Water helps in the breakdown of acids, releasing hydrogen ions in the process. This is because water is a dipole molecule and creates net effective dipole movement. However, in the absence of water, the acid molecules don’t break down as much as they should, which makes the pH much higher than you would expect based on their molarity.

In conclusion, it is indeed possible to have a pH outside the conventional 0-14 range. However, in such cases, pH fails to be a useful or even meaningful measure due to the various limitations caused by the instruments and the solution itself. For labelling highly concentrated solutions, one must use concentration, such as molarity, directly.

From a simple perspective, what pH does is help to bring extremely small H+ concentrations to a more familiar range of numbers, but as the concentrations become larger, this practice loses its value and instead becomes counterproductive . Hopefully, over time, there will be certain modifications that will improve the efficiency and accuracy of our extreme measurements. After all, pH is one of the most famous and useful concepts in the world of chemistry, and in the realm of science, accuracy is essential!

Do you know why pH values are recorded in the range of 0-14?