Though the stomach adds hydrochloric acid to digest food, the small intestine adds bases like sodium bicarbonate to neutralize that same acid. Therefore, the poop of a healthy person has a pH of roughly 6.6.

The year was 1822. Dr. William Beaumont, a surgeon in the army, was called upon to treat a voyager and fur trader named Alexis St. Martin, who had been accidentally shot through the stomach.

Despite grim odds, St. Martin survived, but as his wound healed, the stomach lining fused with his outer skin, leaving a direct portal to his stomach. Dr. Beaumont recognised that the hole in this man’s stomach might boost his scientific career. 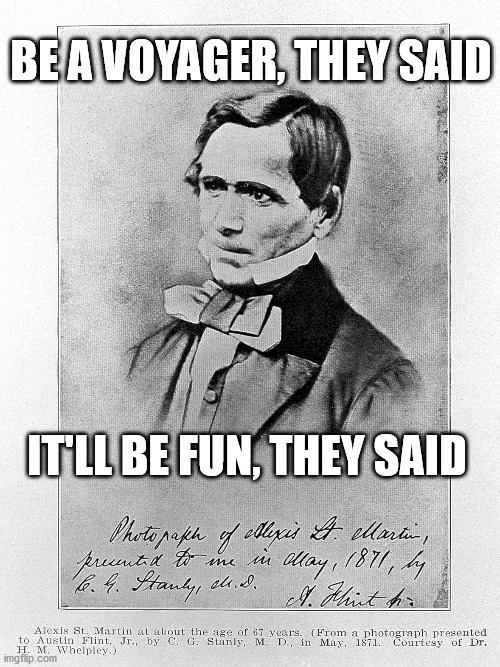 Alexis St. Martin was a voyager and was contracted as a fur-trader. One morning he was accidentally shot with a shot gun. The bullet punctured a hole through his stomach that never healed properly.

Dr. Beaumont employed St. Martin as his house servant (the wound no longer allowing St. Martin to voyage) by day, and made him a guinea pig by night.

Through vials of gastric juices collected, the world discovered that the stomach’s contents can dissolve metal and bones, while also helping us digest our food, thanks to hydrochloric acid or HCl!

If this is the case, then why isn’t poop—food waste that the body couldn’t absorb—highly acidic?

A Brief Overview Of The Digestive System

The digestive system is an efficient multi-process factory. It works in stages to break down our large food items into minuscule molecules that the body’s cells can absorb and use to create energy.

It begins with the mouth, where chewing and saliva make the food into a paste. From here, through the esophagus, the food—now called a bolus—makes its way to the stomach.

From the stomach onwards, most digestion is chemical in nature. Enzymes chemically break down larger molecules into smaller ones, while the acid in the stomach helps to sever chemical bonds (and kill any unwanted bacteria).

The small intestine is the next stop. Here, even more enzymes break up molecules and, importantly, the intestinal cells absorb the nutrients.

Whatever can’t be broken down and absorbed by the small intestine ends up in the large intestine. This unabsorbed stuff is waste, which now resembles poop, and it reaches rectum then out the anus it goes to be flushed away!

The stomach adds gastric juices to digest the food. Part of the gastric juice is HCl, which chemically burns the bolus. This makes the pH inside the stomach a sour 1.5 to 3.5.

A little astonishingly, the HCl is manufactured in-house. Certain cells of the stomach, the parietal cells, secrete HCl into the stomach.

To make sure every part get digested, the powerful muscles of the stomach push the food around in the stomach. Think of how you toss your french fries with seasoning to get each fry coated.

Also Read: What Is The Ideal pH Of The Body?

To protect itself from its own acerbic self, the stomach produces a thick lining of mucus on its walls. Think of this like a goopy barrier to the actual skin of the stomach.

The Small Intestine Adds Bases To Help Neutralize The Acid

This acidic mixture makes its way, little by little, to the small intestine.

The solution? Simply add a little base! 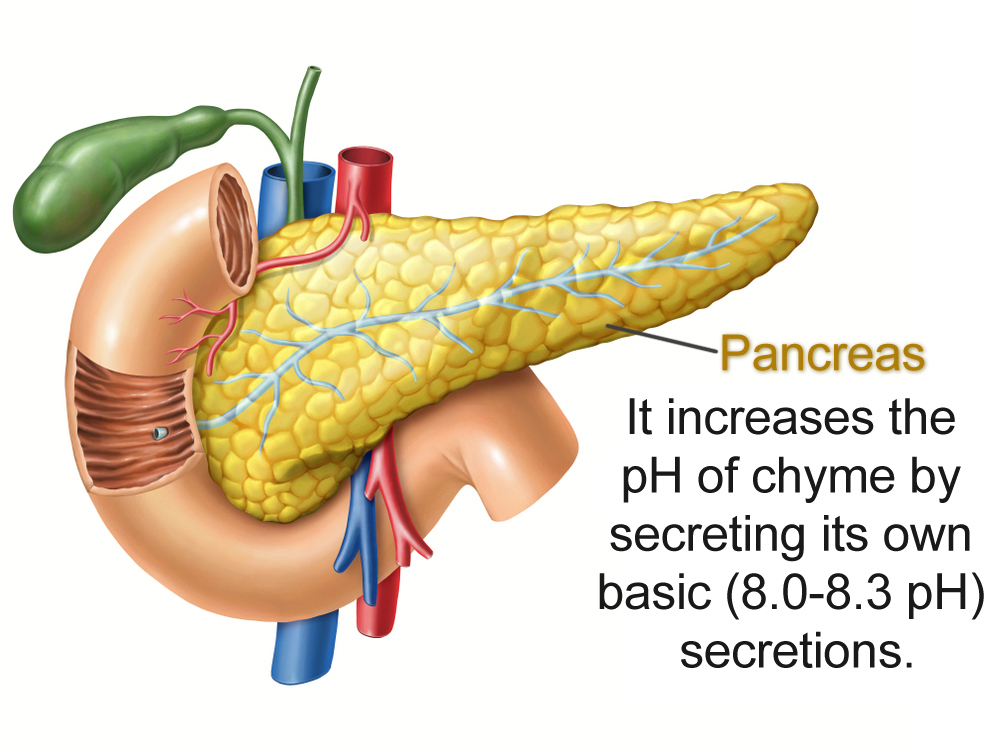 The pancreas’s secretion is 8.0-8.3 pH which neutralises the HCI of the stomach (Photo Credit : Andrea Danti/Shutterstock)

The pancreas helps the small intestine out by producing an alkali potion. Pancreatic juices have a pH of 8.0-8.3. Secreted along with bile (with a neutral pH of 7.8), these two secretions manage to increase the pH of the small intestine to a more balmy neutral state.

As different nutrients get absorbed, the chyme—as the “food” substance is called after it leaves the stomach—changes pH as it progresses through the small intestine.

Gastric juices, pancreatic juices and bile all have copious amounts of water, other enzymes, and salts in them. More water is secreted by the small intestine. The total secretion can be 7-9 liters!

The water decreases the acidity of the stomach and maintains pH balance in the small intestine.

Most of the water and salts get reabsorbed in the small and large intestines. This means that most of the chloride ions that make up HCl have been reabsorbed by the small intestine.

The pH Of Poop

This leaves our poop at a mild 6.0 to 7.2. Anything higher or lower would indicate that something is wrong in your gut.

Bacteria produce a lot of organic acids that change the pH in the small intestine. A change in the gut microbiota might lead to changes in the organic acids, which could affect the pH. 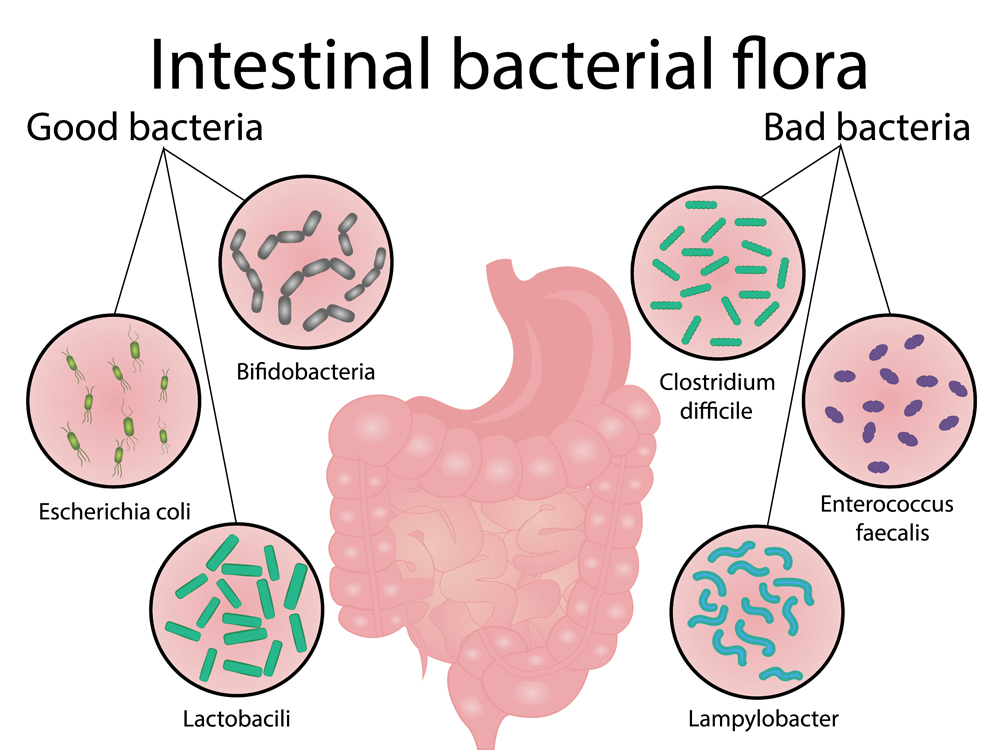 Additionally, an inflamed small intestine cannot absorb nutrients well. Unabsorbed nutrients can alter the pH of poop to be either more acidic or more basic. Diarrhea might also cause changes in the poop pH.

Also Read: How Does The Human Digestive System Work?

Medical professionals often use the pH of poop to determine a patient’s health status.

Dr William Beaumont’s methods are ethically dubious (considering that Alexis St. Martin tried to run away home to Canada twice), but he made 51 observations that had never previously been made before on human subjects. Through these observations, the world found out about the mucus lining the stomach and how long different food takes to get dissolved in the stomach!