Ammonia is a weak base because its nitrogen atom has an electron pair that readily accepts a proton. Also, when dissolved in water, ammonia acquires hydrogen ions from water to produce hydroxide and ammonium ions. It is the production of these hydroxide ions that imparts ammonia its characteristic basicity.

There are a few chemical compounds that are particularly well-known for how remarkably smelly they are. I remember, back in high school, when we passed by the Chemistry lab, that we sometimes used to get a whiff of a pungent, ‘rotten egg’ smell. “They must be working with hydrogen sulfide,” we used to say. Another compound that we recognized instantly was ammonia. Its strong, penetrating smell is often associated with urine, cleaning products and human sweat.

In this article, we are going to discuss ammonia, its properties, and whether it’s an acid or a base.

Ammonia is a chemical compound containing one nitrogen and three hydrogen atoms. Also known as azane (its IUPAC name), its chemical formula is NH3. 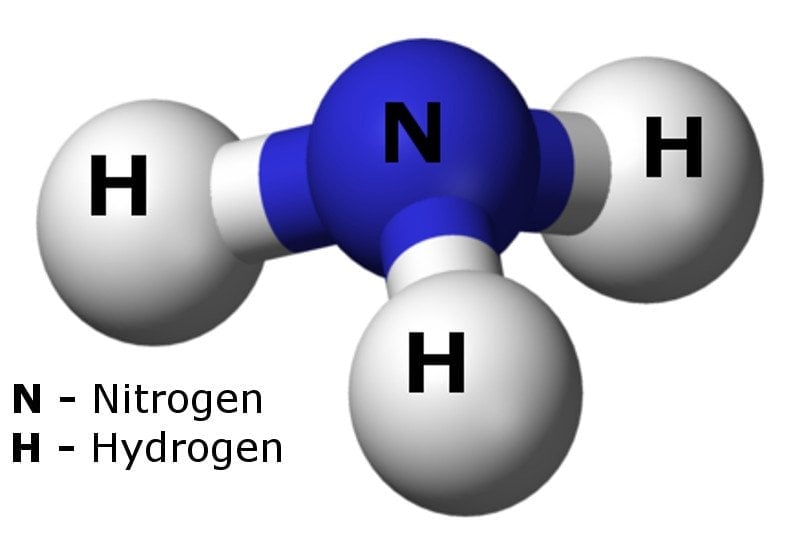 It is easily recognizable, thanks to its sharp, pungent odor, which is similar to urine, cleaning products (as many such products contain ammonia in very small amounts) or sometimes human sweat.

However, its penetrating odor can be removed by reacting it with either acetic acid or sodium bicarbonate, as both of these reactions lead to the production of odorless ammonium salts.

Ammonia is a colorless gas that is found in very small quantities in nature. Its density is 0.589 times that of air, which means that it’s lighter than air. It is highly soluble in water and is therefore commonly used as a water solution called ‘aqua ammonia’. Ammonia is produced from nitrogenous vegetable and animal matter, and is also found in trace amounts in rainwater.

The upper ammonia clouds visible on Jupiter’s surface are arranged in bands that are parallel to the equator. (Photo Credit : ESA/Hubble / Wikimedia Commons)

What is a weak base?

A weak base is a chemical compound that dissociates only partially in an aqueous solution (a solution where the solvent is water). Another way of saying this is that a weak base does not ionize fully in an aqueous solution. For the uninitiated, ionization is the process through which an atom or molecule gains/loses electrons to form ions and acquires a negative/positive charge.

If you want a more technical definition of a weak base, it is a base whose protonation is incomplete. Some examples of weak bases are methylamine, alanine and, of course, ammonia. What makes ammonia a weak base?

Ammonia is considered to be a weak base as a result of its chemical structure, which is diagrammed below. Notice the configuration of electrons on the nitrogen atom. It consists of a lone pair (electrons that are not directly involved in bonding), which easily accept a proton, rather than donating one, which leads to the formation of the ammonium ion.

Also, as mentioned earlier, ammonia is highly soluble in water, thanks to the polarity of the NH3 molecule and its ability to form hydrogen bonds. When dissolved in water, ammonia acquires hydrogen ions from the water to produce hydroxide and ammonium ions.

It is the production of these hydroxide ions that imparts ammonia’s characteristic basicity. However, not all dissolved ammonia reacts with water to yield ammonium ions, which is what makes ammonia a weak base.

Furthermore, the ammonium ion acts as a weak acid in aqueous solutions because it breaks down in water to form ammonia and a hydrogen ion.

Hence, although ammonia is mostly considered a weak base, it can also act as a weak acid in aqueous solutions.

How much do you know about ammonia?