The difference between a rubber ball and an iron ball is that rubber is elastic while iron is not. In rubber, molecules are long and tangled, which allows them to deform without breaking. In iron, the molecules are arranged in a more rigid structure and are not able to rotate around the bonds.

Whether entertaining yourself on a rainy afternoon by bouncing a ball off the wall or watching an exciting game of baseball, we’ve all been entertained in countless ways by this banal spherical toy. The most enjoyable of all, however, may be bouncing a rubber ball with a lot of force and watching it careen in all directions. Unfortunately, you can’t have nearly as much fun with a plastic or metal ball.

That begs the question, of course, what makes a rubber ball so special? Why are rubber balls the ultimate bouncing toys? There are two factors that contribute to bounciness; one is the elasticity of the material out of which the ball is made and the other is related to the interaction between the force at which it is bounced and that elasticity.

Elasticity refers to the readiness/quickness with which a material returns to its original shape after being compressed or stretched. Rubber is made of long tangled strings of carbon attached at different points along its length to other strings of carbon. As such, rubber has very strong molecular bonds. The long molecular chains of rubber can physically rotate around the chemical bonds that hold them together, which results in the property of flexibility. This helps rubber to momentarily deform its shape without breaking. Since the molecular chains are cross-linked, rubber can rapidly return to its original shape after deformation.

The Physics Of Falling

Whenever an object is lifted off the ground and raised to a certain height, work is done against the weight of the object, which is stored as potential gravitational energy. When the object – in this case a rubber ball – is released and falls to the ground, the force of gravity acting on the ball causes it to accelerate, converting potential energy into kinetic energy. Just before the ball collides with the surface, all the potential energy is converted into kinetic energy.

Also Read: Why Do Rubber Bands Lose Their Elasticity?

At the molecular level, when the ball comes in contact with the surface of the ground or wall, the molecular strands of the ball are compressed or squashed by the downward force acting on it, coupled with the upward force exerted by the ground. The ball changes shape from a circle to an oval.  As the ball changes shape, the force produced by the bonds, which hold the different strands of rubber together, becomes larger.

Upon impact, the ball comes to an abrupt halt, but still possesses a great amount of kinetic energy. Some amount of energy that the ball contains is absorbed by the surface, but the remaining has to go somewhere, so it is stored as elastic energy. Again at the molecular level, the downward force on the strands decreases, while the force exerted by the bonds increases, which results in the strands regaining their original shape. It takes a very short time for the ball to come to a complete stop, after which the elastic energy of the ball is released and the ball enacts a force on the ground. There is an equal and opposite force on the ball in the upward direction (Newton’s Third Law), which makes it bounce. The conversion of elastic energy to kinetic makes it rise against the ground. In other words, it bounces back into the air!

In case of a plastic or metal ball, the material is not elastic, although it has the same amount of kinetic energy. The surface that the ball strikes will absorb most of the energy upon impact and since the material is non-elastic, it will not be compressed or reshaped, which would give it the required amount of force to rise (bounce). Also, the transfer of kinetic energy to the surface the wall will lead to a dent or a hole in the wall, since the force has nowhere else to go!

The surface also matters. If the same rubber ball is bounced off a carpet, it won’t rise or bounce to the same height as when bounced on solid ground. The time it takes for the ball to come to rest is longer, due to the compressibility of carpet, which means that more force is transferred to the carpet, thus leaving less force for the “bounce back”.

Now that you know the science of elasticity, try bouncing a few things off your walls and see what happens! 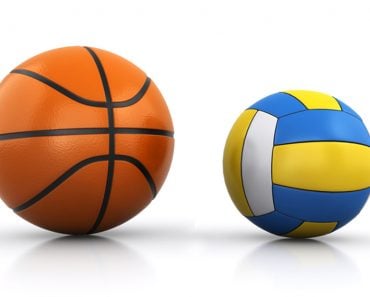