The fuzz on a tennis ball is important because it helps the ball to spin and slow down. The fuzz also makes the sport easy on the spectators by making the ball easier to follow.

The fuzzy covering on a tennis ball is known as the nap. It not only changes the speed of the ball, but also imparts spin to it as the ball travels through the air.

Tennis balls: then and now

The game of tennis originated sometime in the 12th century, in the court of Louis X of France. It was known as real tennis back then. The earliest known tennis balls were simply strips of wool rolled together into a tight ball. However, even royalty knew a bit about aerodynamics – the ball was covered with a leather or cloth covering to prevent it from flying out of the indoor court every time it was knocked about.

Tennis balls have evolved since then and are now made with rubber. Raw rubber pellets are molded into hemispherical shells. Two of these shells are glued together by a strong adhesive to form a ball. During this process, the ball is also inflated with pressurized air to make it bounce.

The fuzz on a tennis ball

A textile material made of wool, nylon, and cotton is cut out in the shape of a dumbbell, and two such pieces are then glued over the ball (check out the gif below). That’s why a tennis ball has those curvy seams. This fuzzy covering of textile fibers on the ball is known as the nap. The nap is actually the most important component of a tennis ball, and is a real game-changer for the sport. Not surprisingly, the materials needed to make the nap, or the fuzz, are the most expensive components in the manufacturing process.

How does the fuzz on a tennis ball help?

You must have seen tennis greats like Serena Williams, Novak Djokovic and Rafael Nadal spend two to three minutes before a serve or an important match point simply choosing a ball. They feel it, examine it closely and bounce it about before they finally pick one ball and stuff some others down their pocket. Is this a good luck charm? No. They’re actually looking for a ball that has its fuzzy covering almost perfectly intact.

Balls need to be changed frequently, as the fuzz on them wears out (Image source: flickr.com)

You can try this: shear the fuzzy covering off a tennis ball and then try to play tennis with it. What do you find? The ball travels much faster and goes outside the court with almost every shot. You could also end up seriously injuring your opponent because they have very little time to react to the ball speeding towards them. It is also difficult to control the direction in which the ball travels.

Air can be thought of as a fluid, in the sense that it flows like other liquids. When an object, such as a ball, moves through the air, the air tries to resist or block the motion of the ball. This resistance is a force known as aerodynamic drag. If the ball has a smooth surface, there is very little friction between the surface of the ball and the surrounding air. This is why smooth balls can travel much faster through the air.

On the other hand, if a ball has a rough surface, like the nap on a tennis ball, every fiber on that nap is like a hurdle that air must get through. That is why air moves more slowly over the nap. This leads to increased friction between the ball and the air, causing the ball to lose momentum and slow down. This kind of drag force is known as skin friction drag. 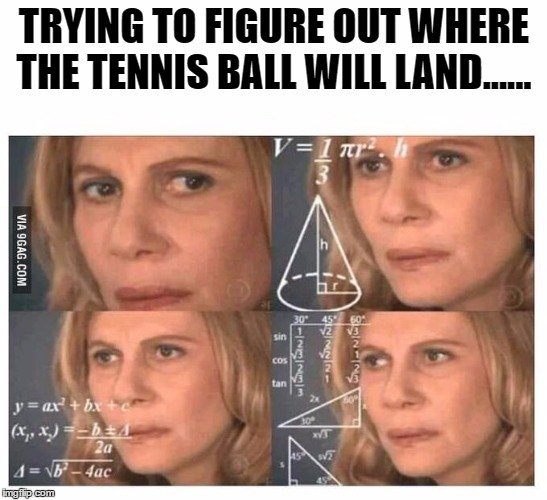 Also, as the ball cuts through air, it is essentially trying to knock the air out of its way. This creates turbulent swirls of air behind the ball. These swirls are known as a wake. A turbulent wake forms a region of low pressure behind the ball. The larger the size of the wake, the greater the area of low pressure. The front of the ball, however, is still experiencing a higher pressure, and this pressure difference causes the ball to experience ‘drag force’ in the direction opposite to which it is moving, causing the ball to slow down.

This drag force arising from the low-pressure region essentially tries to ‘suck’ the ball in. This sucking action curves the trajectory of the ball and imparts a spin to it.

Professional tennis players make use of this drag force to make the ball spin in different ways with appropriate forehand and backhand shots, basically sending their opponents running everywhere across the tennis court.

How slow does the ball actually get?

The ball slows down to nearly one-third of its original speed. If the speed of the ball is 150 mph when it is served, the ball will reach the opponent at around 50 mph. In addition to being slowed down by the aerodynamic drag forces, the ball also loses speed when it bounces off the court’s surface.

After a ball gets knocked about for a bit, the fibers on the nap tend to come loose. Loose fibers slow down the ball even further, which is why tennis players look for a ball with a tightly woven, uniform nap.

Why is the fuzz on a tennis ball green?

This feature is to make the sport easy on the spectators. Yellowish-green is the most visible color for the human eye, making it much easier for the players and spectators to follow the brightly colored ball as it volleys rapidly back and forth across the court. 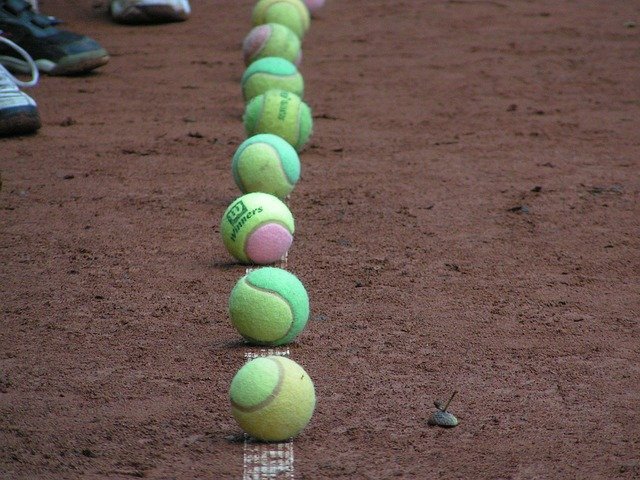 To maintain uniform playing standards in different weather conditions, and on different court surfaces like clay and grass, the International Tennis Federation (ITF) recommends the use of seven different types of tennis balls. These types differ by the amount of pressurized gas in them and the thickness of the fuzzy covering. Over 200 different brands of balls are tested every year by the ITF in sophisticated wind tunnels to study their aerodynamic performance. A tremendous amount of research is dedicated to studying tennis ball aerodynamics to improve on ball design and player performance.

The fuzz on a tennis ball basically decides the course of the tennis game. Grand Slam winners perfect the art of using the fuzz to their advantage, while the others… just smash their poor tennis rackets in frustration!