Rubber bands are useful for all sorts of daily tasks, from tying back your hair to closing a bag of potato chips, but have you ever considered the nature of these strange rubber rings? For example, when you stretch a rubber band, not only does it seem to get thinner and change color, but even the temperature of the rubber changes! On the other hand, if you release a rubber band and let it go back to its normal size and shape, the rubber feels cool to the touch and the color returns to normal. You may not believe me, so go and try it for yourself, and then come back to find out why rubber bands behave in such peculiar ways.

What is a Rubber Band?

Rubber bands are rings of rubber that vary in size, thickness, strength and color, and are used in a wide variety of industries around the world. Rubber bands are typically made from organic rubber, as it offers much better elasticity than synthetic rubber products. Rubber that you see in everyday use often comes from the rubber tree (Hevea brasiliensis), which is mainly cultivated in Southeast Asian countries, such as Thailand and Indonesia. Rubber is a unique material because it is primarily composed of polymers, which are long-chain molecules. Why Do Rubber Bands Change Temperature?

Now that you understand the basic physical nature of rubber bands, we can dive into the unexpected thermodynamic behavior of rubber bands. As mentioned above, rubber bands tend to give off heat when they are stretched, and feel cool to the touch when they’re allowed to return to a “normal” state. While many people associate heat release with an energy change, there is no specific difference in the energy of a normal rubber hand and a stretched one. However, there is a difference in entropy!

When you stretch a rubber band, you are aligning the polymers and eliminating all the chaotic tangles. In effect, you are lowering the entropy of the molecules, but the universe prefers to move towards entropy. Order requires energy and effort, while entropy is the natural direction of matter. When a rubber band is allowed to release and return to its high-entropy state of tangles and knots, the elastic force that causes that contraction is considered an entropic force!

On the flip side of this process, when you release a rubber band, the polymers must perform some level of work to overcome the forces keeping them straightened. The energy to perform this work comes from heat, which is consumed in the polymers’ return to a high-entropy position. This utilization of heat from the surrounding air, and the high-vibrating polymers, will cause the rubber band to feel cooler (even than the surrounding air) once it returns to its normal, relaxed state. 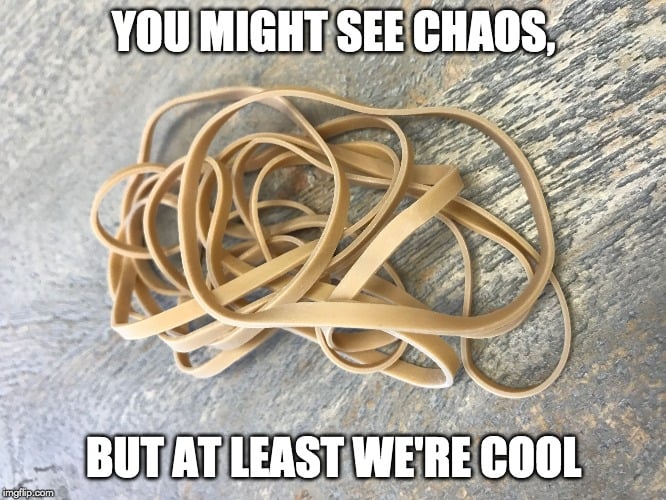 This is also the reason behind another bizarre fact about rubber bands; while most substances contract when exposed to cold temperature (blood vessels, water, metals, etc.), and expand when warmed up, rubber bands behave in the opposite fashion. If you give rubber bands more heat energy, they will continue to shrink, increasing their entropy, while exposing them to cold will cause them to loosen, stretch and expand!

Next time you throw your hair up into a ponytail, perhaps you’ll think twice about the rubber band you so carelessly stretch around your locks. While they may seem like simple tools, they represent a rather unique and fascinating demonstration of our universal laws of thermodynamics. You may think you life is chaotic, but remember, everything from the rubber band on your wrist to the nuclear heart of the sun is also heading in the direction of entropy!