A mood ring is a ring usually made of thermochromic elements, the colors of which change based on shifts in the temperature of the finger of the person wearing it. Entrepreneurs from New York, Maris Ambats and Josh Reynolds, came up with the first mood ring in 1975. These rings became an instant success in the 1970s, despite their somewhat extortionate pricing. 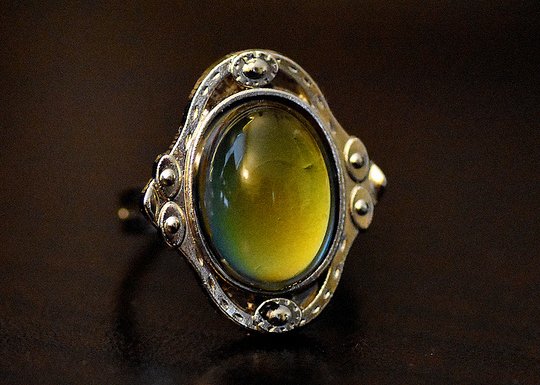 Young women were smitten by the fact that these rings changed color to supposedly indicate their mood. The color change was actually a response to changes in temperature, but marketers cleverly associated this temperature change with the wearer’s emotions.

Despite the accuracy of their mood detection being questionable, women were enchanted by the vibrant colors produced by these rings, and with advancements in the field of material science, the composition of mood rings has been improved even further!

The Composition Of A Mood Ring

Mood rings are rings that have a stone or band that changes color in response to variations in temperature. A mood ring is sort of like a sandwich. The bottom layer is the ring itself, which is usually made of sterling silver, but other variations include plating it with gold. A strip of a thermochromic liquid crystal is then glued to the ring. A protective casing in the form of plastic or glass is added over the liquid crystal. 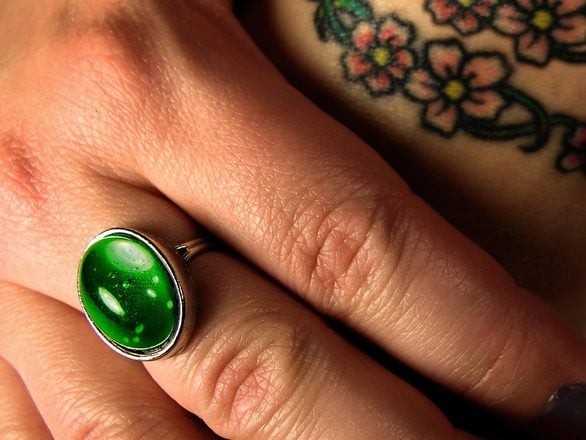 There are abundant natural and synthetic liquid crystals available, and their colors change with temperature shifts. Thus, the exact composition of a mood ring varies by manufacturer, but most rings contain liquid crystals made from organic polymers.

Mood rings back in the 1970s were susceptible to water and moisture and would stop functioning if even a drop of water reached the liquid crystal inside. However, modern-day mood rings are well-sealed to prevent water (or any other liquid) from making its way inside the protective casing and disrupting the liquid crystal’s color-changing activity.

Relationship Between Temperature And Emotion

While the color change cannot match a person’s exact emotions with precision, it can reflect temperature changes caused by the body’s physiological reaction to internal sentiments. For example, when you’re worried, blood circulation is directed more toward the body’s core organs, which then decreases the temperature at the extremities of the body, including the fingers. When you are feeling normal or relaxed, your fingers will be warmer, as the blood circulation will be normal. When you get excited or perform a physically intensive chore like exercise or jogging, the rate of blood flow surges, making your fingers warmer than usual.

How Do Mood Rings Work?

As mentioned earlier, a mood ring is composed of liquid crystals. This liquid crystal undergoes change in color in response to changes in the temperature of the body part in contact with the crystal. We just covered how the flow of blood can influence the temperature of your skin, so there is some tangible basis in the functioning of the mood rings, but their accuracy is still up for debate. 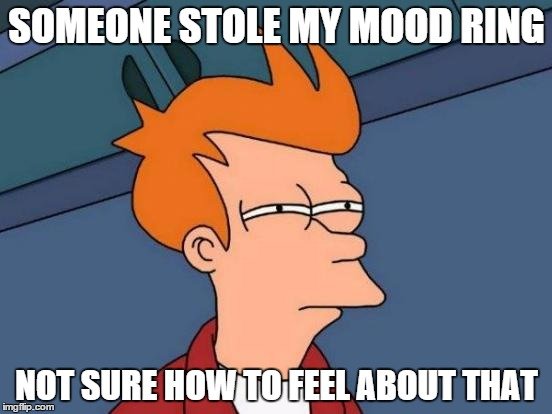 Although the temperature of your finger (and thus the color of the mood ring) may change in response to your emotions, the temperature of your finger also changes for other reasons. It’s not uncommon for a mood ring to provide erroneous results (wrong color changes) based on other factors, such as the climate or state of your health—factors that a mood ring doesn’t take into consideration. 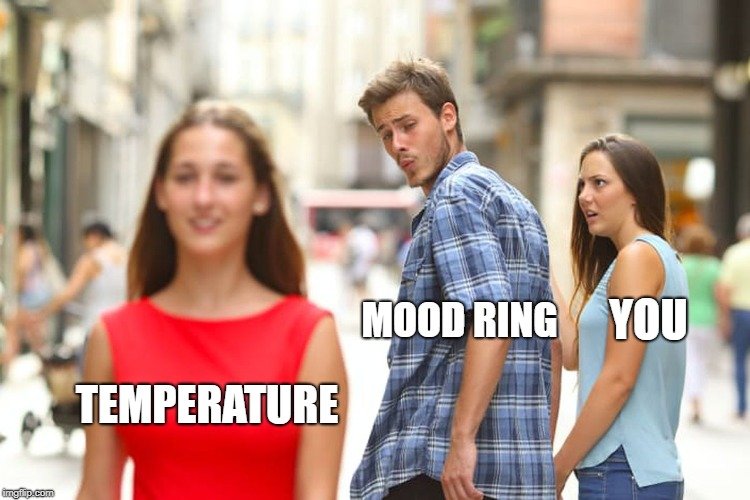 The table below shows the colors of the original 1970s mood ring and the meanings popularly associated with those colors:

How Long Do Mood Rings Last?

Mood rings are supposed to reflect your mood based on the temperature of your finger, but how long can this magic jewelry keep intriguing you with its chameleon-like response?

You can expect a high-quality mood ring to last for a couple of years, but if taken care of, they can last for decades. However, few mood rings from the 1970s are still found at antique shops in working condition.

Remember that mood rings are vulnerable to water and moisture. Most mood rings meet their unfortunate end when water seeps into the main crystal of the ring. Once water comes in contact with the crystal, the ‘jewel’ becomes unresponsive and turns black. After that, it no longer changes its color or responds to temperature changes.

Similarly, very high temperatures can also damage mood rings. Leaving your mood ring in a hot place, such as the dashboard of a car, or keeping it exposed to direct sunlight for long periods of time, can lead to irreversible stone damage.

Therefore, to keep a mood ring functioning for a long time, you must use it carefully. You should avoid wearing it in rainy conditions or carrying it with you to the bathroom. You can extend the life of your mood ring by storing it at a normal room temperature away from sources of heat and moisture.