Most thunderstorms occur later in the day because in the evening, the ground is at its hottest, following an entire day of sun heating, which causes warm air to rise and meet the relatively cooler air up in the atmosphere, leading to instability. Also, daytime heating enhances the air’s capacity to evaporate water vapor. This instability in the atmosphere combined with a lot of warm air causes thunderstorms to typically happen later in the day.

Most thunderstorms occur later in the day because in the evening, the ground is at its hottest, following an entire day of sun heating, which causes warm air to rise and meet the relatively cooler air up in the atmosphere, leading to instability. Also, daytime heating enhances the air’s capacity to evaporate water vapor. This instability in the atmosphere combined with a lot of warm air causes thunderstorms to typically happen later in the day.

There are some weather events that seem to have rather unusual characteristics. For instance, you have probably heard the adage that there is silence before a storm. Although this is not true in every case, it certainly turns out to be true in some. 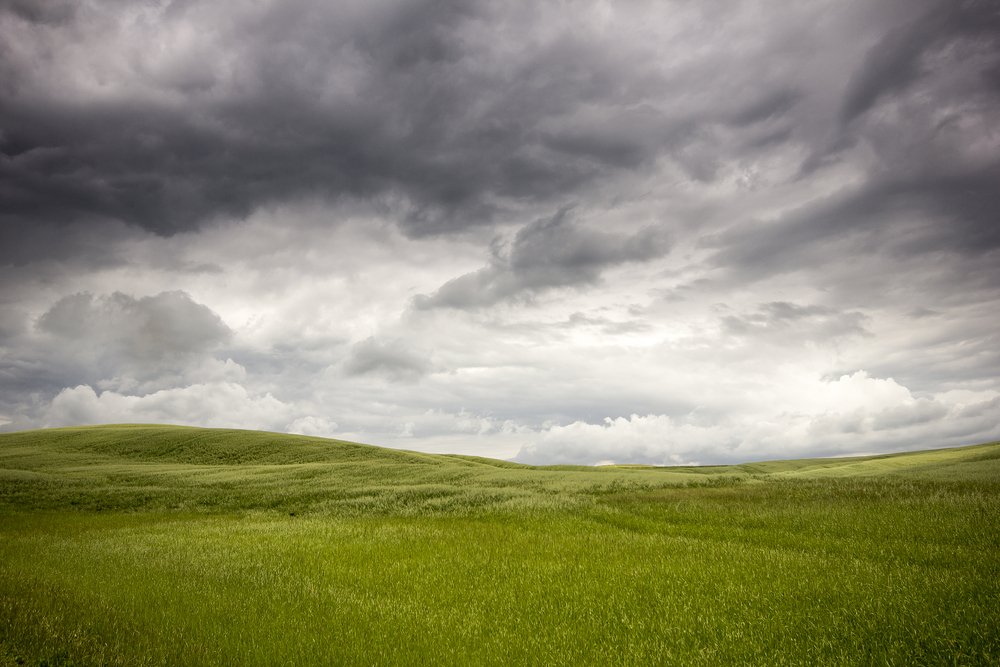 Sometimes, there is an eerie stillness preceding a storm, while at other times, the storm can simply decide to skip this part and announce its arrival by displaying some ominous signs in the sky (e.g., when clouds start accumulating and rumbling at the same time). (Credit: Pavel Szabo/Shutterstock)

Similarly, you may have noticed that most thunderstorms occur in the later part of the day, i.e., at night, in the evening or even during late afternoon. It’s not that they can’t occur in the mornings, it’s simply that thunderstorms usually strike during the latter parts of the day. Why is that?

Before we get to that, we need to understand how thunderstorms occur in the first place.

What is a thunderstorm?

A thunderstorm is simply a rain shower that is accompanied by lightning and loud thunder. Also referred to as a lightning storm, electrical shower or thundershower, it is characterized by strong winds and heavy rains. Some thunderstorms may not include any precipitation at all (known as dry thunderstorm), while others may be accompanied by snow, sleet (ice pellets) or even hail.

How do thunderstorms form?

Thunderstorms form as a result of warm air rising and cold air sinking within the atmosphere. Thunderstorms are broadly classified into a few types, but any kind of thunderstorm requires three basic ingredients to form – a source of moisture, an unstable atmosphere (i.e., rising hot and sinking cold air), and a mechanism to trigger a thunderstorm updraft, either through heating or forced lifting.

When the ground is heated by the sun’s radiation, the air immediately above it becomes hot (due to conduction) and begins to move up in the atmosphere (the conjunction of wet/dry and warm/cold air in areas like hills or mountains can trigger a rising motion). The warm, less-dense air continues rising within the atmosphere until it’s lighter than the air surrounding it. 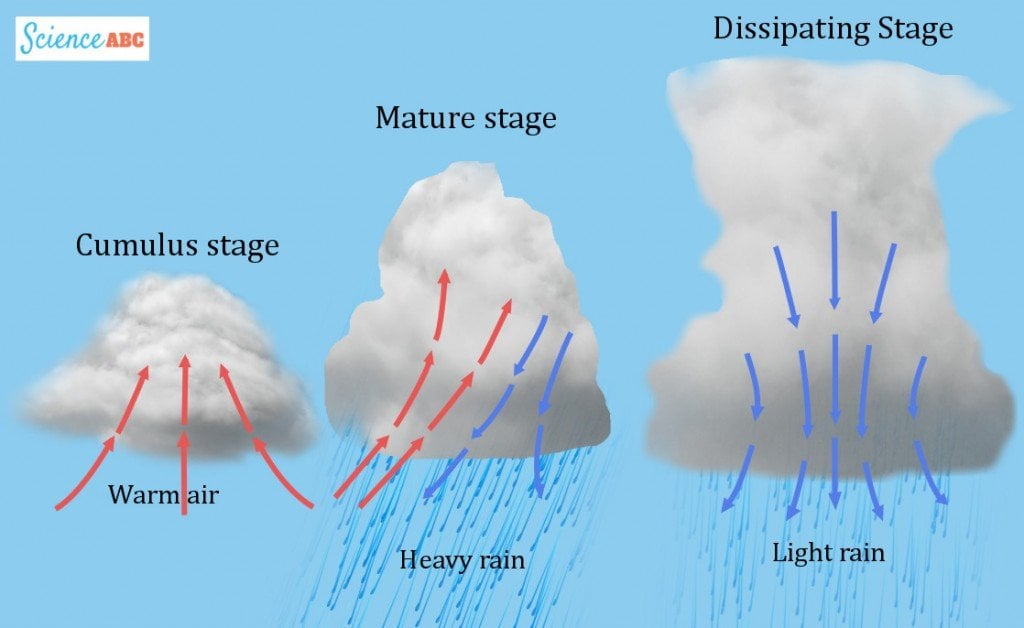 The various stages of the formation of a thunderstorm.

The rising air, which also carries a lot of water vapor, constantly transfers its heat to the upper levels of the atmosphere (due to convection). As a result, the heat is steadily lost and the water vapor it carries begins to cool down, subsequently turning into a cloud.

This cloud travels to the upper levels, where the temperature is still lower, and becomes host to a ton of small ice particles (which are actually just frozen liquid drops). These ice particles sometimes bump and rub against one another, gaining some net electric charge. Large regions of electric charges eventually cause lighting and loud cracks of thunder, the classic signs associated with a thunderstorm. Now that we have discussed what thunderstorms are and how they actually form, let’s address the question we posed at the beginning of this article.

Why does it seem like thunderstorms occur later in the day?

Although thunderstorms can (and do) occur at all hours of the day, it’s true that they ‘mostly’ occur later in the day.

As mentioned earlier, there are three key ingredients to form a thunderstorm, namely moisture in the air, large changes in the air temperature with increasing height, and some process that forces the air to rise. During the day, i.e., when the sun is shining brightly in the sky, the Earth’s surface gets heated up pretty thoroughly until late afternoon. This is why the air close to the ground becomes less dense and rises so easily. Furthermore, daytime heating also enhances the air’s capacity to evaporate water vapor. This allows for greater amounts of moisture to be present in the rising air, causing more instability within the atmosphere, which further boosts the likelihood of a thunderstorm forming.

As two of the three essential factors required for the creation of a thunderstorm are at their highest point in the late afternoon, most thunderstorms occur during that prime part of the day.