Rain fall as drops because the water in clouds is in a vapor state. As this vapor condenses, it moves into a solid form. The solid mass leaves the cloud, and as it falls, the temperature around it turns it into a drop.

Why do raindrops exist at all? Why does rain fall in the form of tiny, but seemingly infinite drops?

Our science textbooks from high school likely taught us how the water cycle works, but here’s a quick refresh.

Water, in its various states, moves continuously on Earth and in the atmosphere. This movement of water is cyclic and repetitive, and is therefore called the water cycle.

The process of evaporation (conversion from a liquid to a gaseous state) converts the water in lakes, seas and oceans into water vapor. This water vapor condenses (transformation from a gaseous to a liquid state) in the upper layers of the atmosphere to form a cloud. Water from clouds descends back to the Earth as rain, snow or hail.

This is the water cycle. So… how does the precipitation occur in the form of raindrops?

How Do Raindrops Form?

When air that is already warm and moist rises away from the surface of the earth, it cools, and the water vapor present in the air condenses to form clouds. Depending on the altitude and the temperature of the air around it, a cloud may be composed of either tiny ice crystals or drops of water.

This composition varies from cloud to cloud, which results in the various types of clouds we see. The vast majority of precipitation originates from very tall nimbus or cumulonimbus clouds.

What Are Nimbus And Cumulonimbus Clouds?

Nimbus clouds are the huge, dark grey fluff balls we see that forecast an upcoming downpour.

Cumulonimbus clouds, which are even bigger than the nimbus clouds, look like entire buildings and massive towers of clouds! These clouds are the major culprits behind hail storms, thunder and lightning.

How Does Water Vapor Condense?

Now, for water vapor to condense into precipitation, it needs something called a “condensation nucleus”; this can be very small dust or pollen particles that are carried to high altitudes by moving air, which is the result of changing temperatures, pressure and density.

When the cloud’s droplets reach a size and weight at which they are able to resist the thermal force pulling them upward, they begin to fall.

Even though all clouds contain some amount of moisture, rain falls from only a portion of them, while the rest simply evaporate into the sky. To begin, each individual droplet that makes up a cloud has a diameter less than 20 micrometers. A cloud contains a great number of hygroscopic particles (which readily absorb moisture), and drops of precipitation often develop as a result of these particles soaking up water.

Also Read: At What Point Do Clouds Become Heavy Enough To Rain?

The water droplets that descend from clouds are what we refer to as rain. They typically have a diameter of at least 0.5 millimeters the majority of the time. The amount of water contained in a cloud droplet is approximately one million times less than that of a raindrop that is large enough to fall to the earth without immediately evaporating (average diameter is ~0.012 mm). It does not matter how hard it is raining; the average size of a single drop is only about 5 millimeters in diameter.

Before descending to the ground, a raindrop might draw hundreds of tiny aerosol particles towards its surface as it moves through the sky. Coagulation is the process through which droplets and aerosols attract one another, making the drops even bigger.

So… how does it remain only 5mm in diameter? Well, the frictional drag caused by the air is greater than the surface tension holding the drop together, which is why larger drops don’t stay together as long. This results in larger droplets fragmenting into smaller ones as they fall.

Frictional Drag is a type of drag that happens when a fluid rubs against the surface of a moving object. 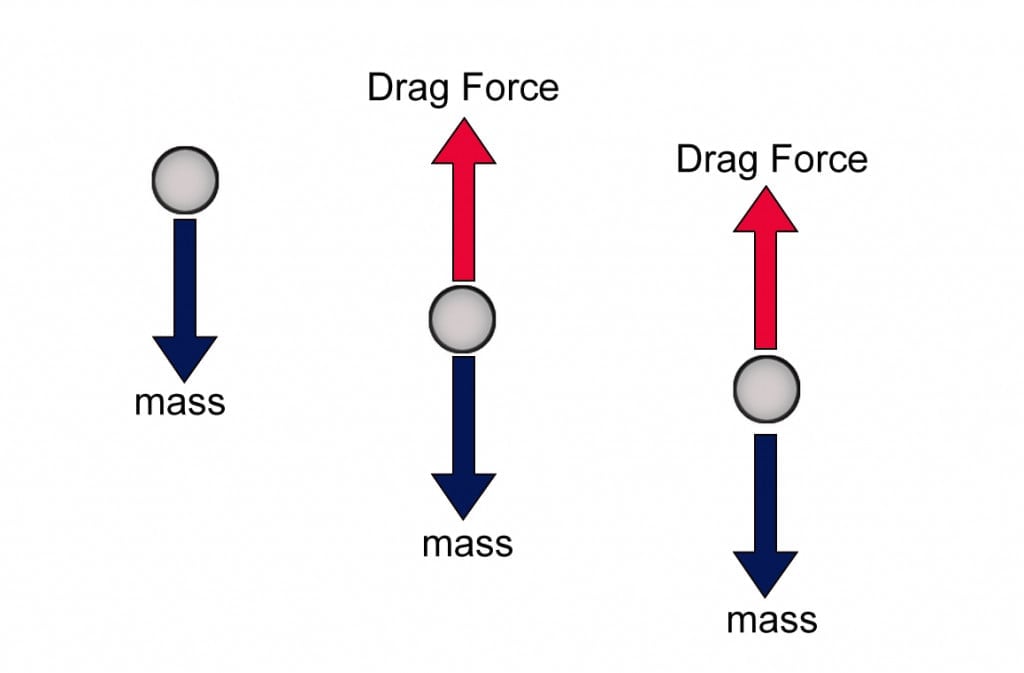 Frictional drag on a raindrop

Surface tension is the tendency for unmoving liquid surfaces to get as small as possible. Surface tension is what makes it possible for things like razor blades and insects, which are denser than water, to float on the surface of water without submerging at all. Surface tension on a raindrop

When raindrops hit the ground, they set off a cascade of smaller water droplets that also descend, with the most significant drops always shattering first. This is an everyday occurrence that can be witnessed whenever anyone violently throws a glass of water.

How Does Precipitation Occur?

The majority of precipitation begins as snow crystals or some other type of solid. When these ice fragments enter the warmer air found beneath the cloud, they typically melt and end up falling to the ground as droplets of rain.

A raindrop starts to fall, and then, because of gravity, it picks up speed. When a single drop falls, it creates a wake in the cloud. A solid body traveling through a fluid will cause a disrupted flow in the region, called a wake. Such a wake is caused by the movement of fluid around the body. This clearance or wake makes it easy for another drop to come after it. It won’t be on exactly the same path, but it will be close.

To understand wakes better, visualize a boat moving through a body of water. The disturbed region behind the boat is called a wake. A wake behind a boat (Photo Credit : Andrea Berg/Shutterstock)

The air around a drop slows it down as it starts to move faster. Even the smallest drop might not fall because rising air currents might hold it in place or push it up until it gets big enough to fall. As bigger drops fall, they create a stream of air around them.

The larger a cloud droplet is, the more likely it is to run into a large droplet. Thus, because each drop is a different size, it will fall at a different rate. Raindrops sometimes bump into each other. When drops hit each other, some will stick together to make a big drop, while others will break up into smaller ones. As the number of drops increases, so does the amount of rain.

A collision does not guarantee coalescence (the combining or merging of components to create a bulk or whole). Experiments have shown that electricity in the air may be the key to why the drops stay together when they hit each other. When a droplet with a negative charge hits one with a positive charge, they may stick together because of the electrical attraction between them.

How fast drops fall depends on how big they are. Big drops fall quickly. Thus, drops keep falling next to each other, instead of in a steady stream. It is quite fascinating to think that pollen and sand grains provide the base for rain drops to form. It certainly helps explain why we have millions of raindrops instead of a single giant one plummeting to the ground!