You might be able to undergo photosynthesis, with the chlorophyll mutated in your cells, but unlike plants, you would require a lot more sunlight.

Plants have it so easy, right? Basking in the sun all day long, looking fresh and green, and getting their essential nutrients, all while enjoying the weather out in the open air. Being the ultimate producer has its perks!

While plants can easily photosynthesize to produce their own food, humans and all other animals must depend on such plants and other animals for food. (Photo Credit : Romolo Tavani & Kris Leov/Shutterstock)

We, the consumers, spend our time foraging for food, tracking it down, making something palatable from it and undeniably expending a lot more energy to acquire it. Unlike humans, most plants don’t have mouths, yet despite not eating any food, the majority of plants can grow much larger and stronger than any of us! By photosynthesizing, plants are able to convert moisture, minerals, and sunlight into usable energy. However, it isn’t just a mechanism that feeds the plant; it’s also the only reason you’re still breathing, and why everything on this planet hasn’t been burnt to a crisp!

What if you could learn a trick or two from plants and harness the massive amount of sunlight falling on Earth’s surface through photosynthesis?

What would you require?

Photosynthesis in green plants demands a combination of carbon dioxide, water and light energy. The leaves carry the primary burden of creating food for the plant, so they are spread flat across the stalk, to catch as much sunlight as possible and ensure maximum absorption. So what does your body lack that would makes it possible for your skin to do the same?

Within a plant’s leaves are mesophyllic cells containing chloroplasts, the food producers of the cell. The chloroplasts contain a photosynthetic, light-sensitive pigment known as chlorophyll, which aids the plant in carrying out photosynthesis and also imparts the green color to a healthy, growing plant. 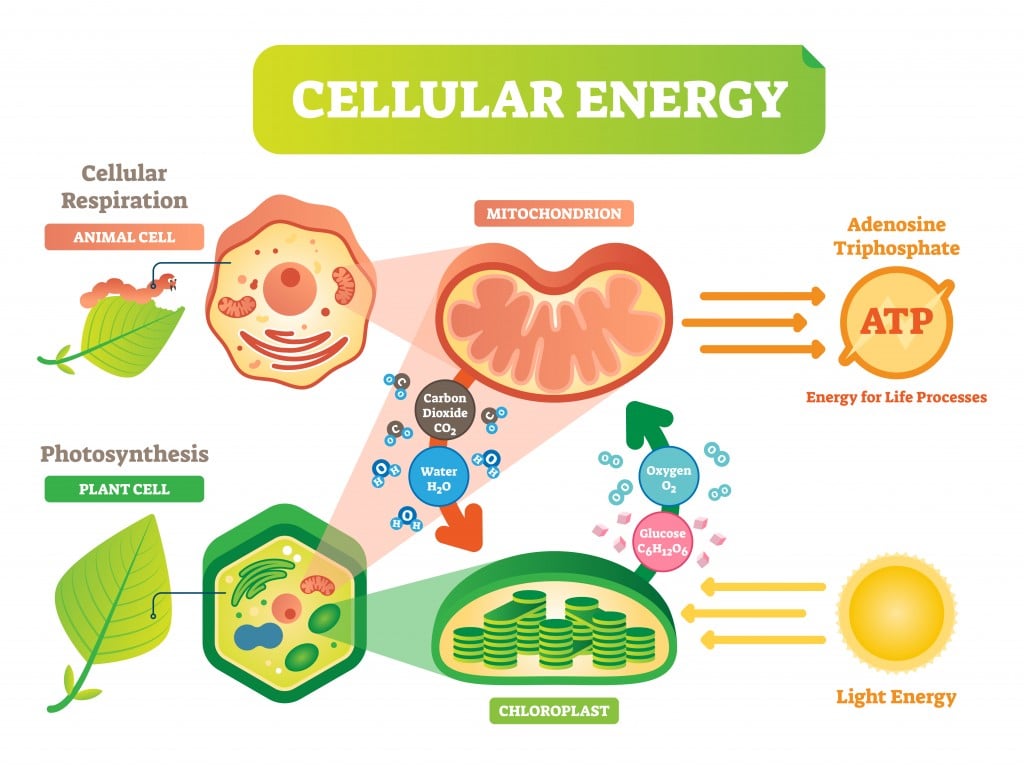 Once these pigments have absorbed the light, it is stored as ATP (adenosine triphosphate), a chemical that readily provides the plant with energy, when required.

Now, imagine a world where every organism contained this magical pigment…

With chloroplast running through your blood, your skin would most definitely turn green. It might not be your favorite color, but isn’t that a price you’re prepared to pay for a life of sunbathing and leisure?

By this point, you’re well aware of how plants absorb light. However, it would be a little different when you consider yourself “photosynthesizing”. Comparatively, you would require a tremendous amount of energy, much more than plants do. In a single day, good exposure to sunlight might provide a tree with as many as 200 calories, whereas a healthy human requires 2,000 calories each day to “survive”, let alone the energy that would be expended in regular physical work! Also, while plants are environmentally friendly, they’re certainly not efficient. A meager 5-10% of the sunlight they receive is converted into useful energy. 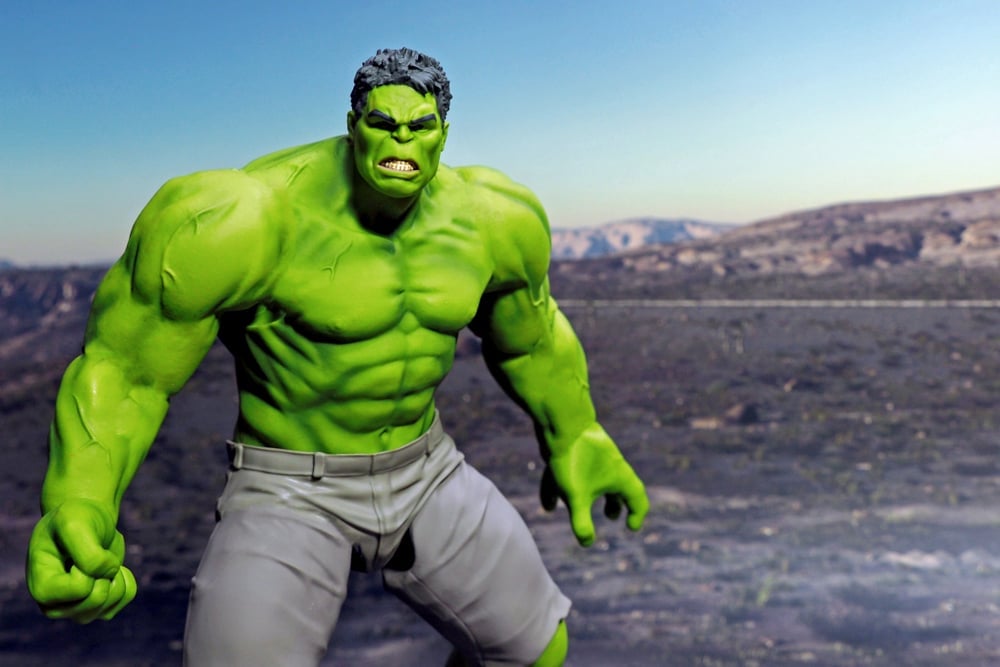 Well, not completely like “The Hulk”, but you would closely resemble him, once the chloroplasts have pigmented your skin and your body has grown in size. (Photo Credit : Krikkiat/Shutterstock)

New adaptations and a change in lifestyle

If you somehow manage to learn how to photosynthesize, you better get good at it—fast! As a natural adaptation, humans would evolve to become much larger, with fewer contours/features on the body to ensure the maximum absorption of light. Traveling in a transport vehicle would be a hassle, as there would be a constant fight for the window seats, especially when a person is hungry! 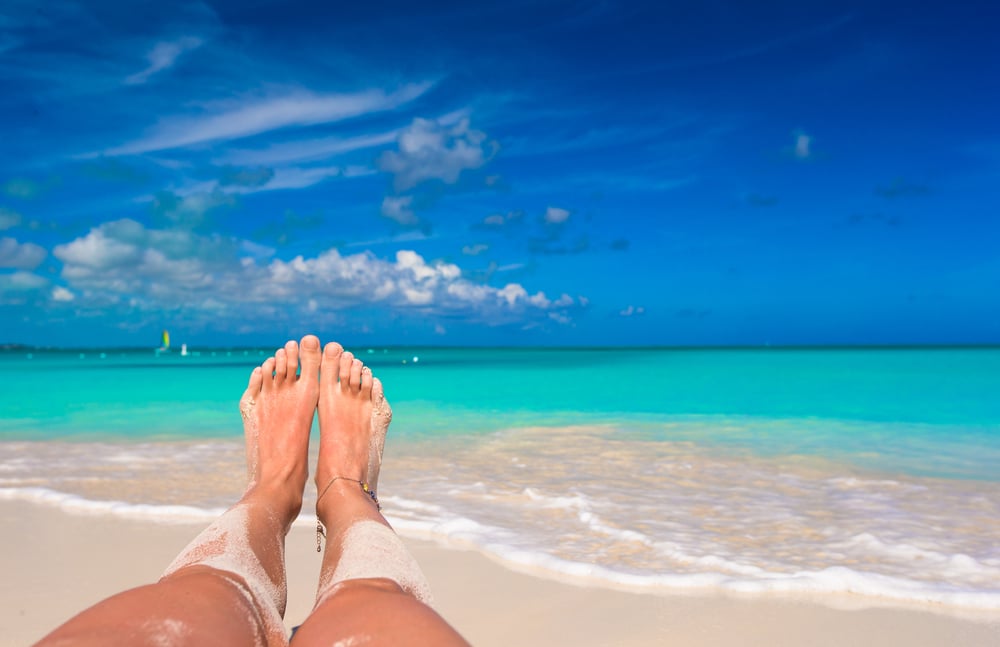 You would have to sunbathe for hours and hours, to fill your belly (Photo Credit: TravnikovStudio/Shutterstock)

To get just the right amount of daily calories, you would have to lie out in the sun all day; sweating is not an option, as every drop counts when you gotta photosynthesize. With any luck, you might evolve to start growing leaves on your body, branching out from every side. This would certainly make the process a little easier, and provide you with some shade, although you wouldn’t want it, since shade would only hinder the absorption of sunbeams by your skin.


Why is this impossible?

First of all, a human body cell does not, in any way, produce light-sensitive pigments like chlorophyll. The viability of this wild idea comes to a stop then and there. However, consider a hypothetical situation where humans did manage to mutate our cells to produce chloroplasts in the cells. What would happen?

However, did you know that in the air we breathe, CO2 comprises less than 0.05%? Also, if humans started photosynthesizing, carbon dioxide would become a limiting factor, meaning that photosynthesis would cease to occur for humans, let alone all the other organisms on Earth that were trying to photosynthesize. Eventually, all life would die in this situation. 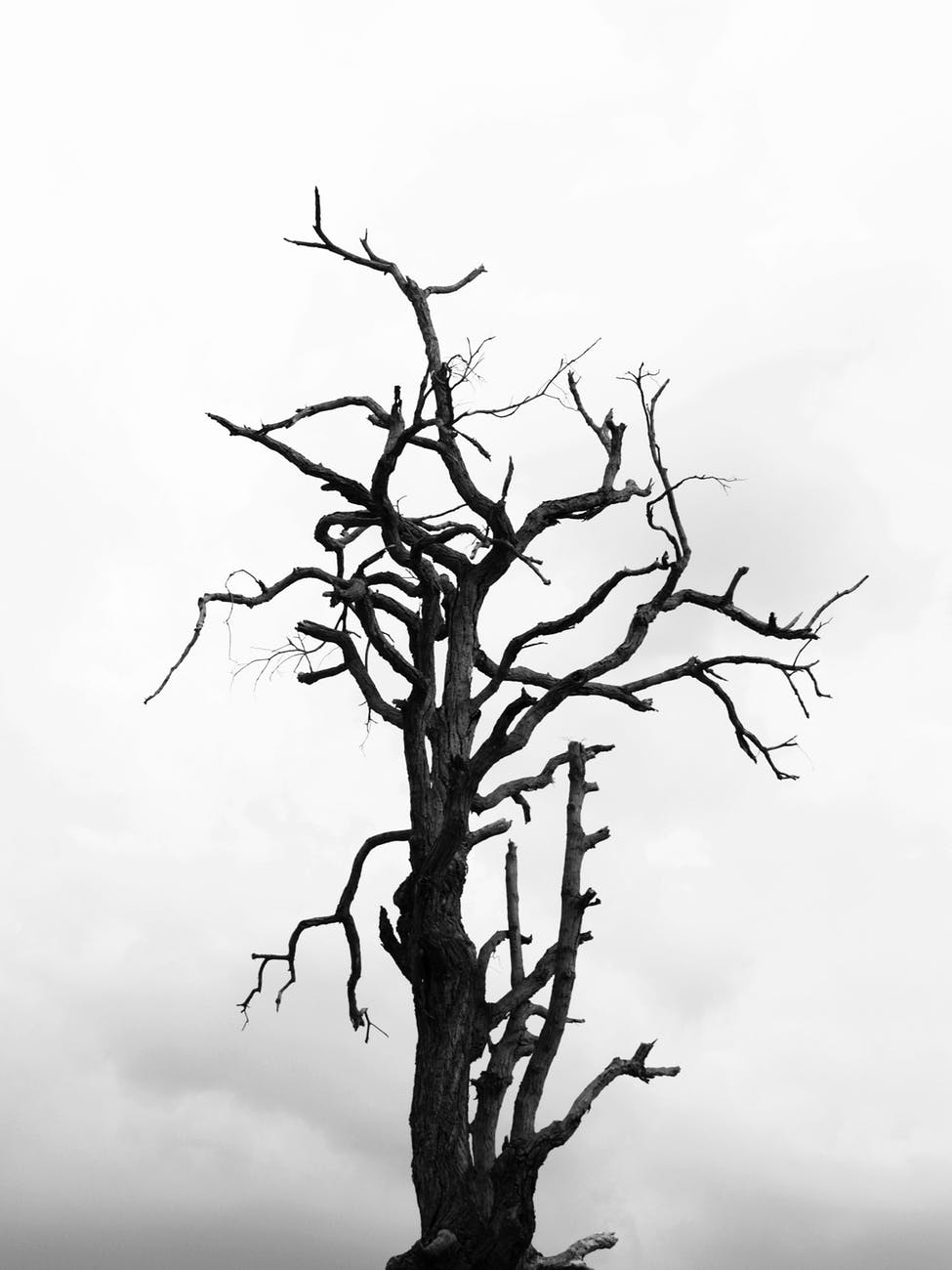 With no carbon dioxide in the atmosphere, sunlight and moisture alone would not be able to sustain photosynthesis, eventually leading to total annihilation. (Photo Credit: pexels)

The distinction between animals and plants has always seemed reasonably coherent, but this line of distinction began to blur with the discovery of organisms that could produce those molecules essential for photosynthesis.

Photosynthesizing creatures: Organisms that can prepare their own food

Elysia chlorotica. This extraordinary sea-dwelling creature steals the genes of green algae, which make up most of their diet. Upon eating the algae, its body cells manage to integrate the chloroplasts into themselves. The secret lies in the complex breakdown of food in their bodies, which is in contrast with the rest of the animal kingdom. Rather than digesting every ingested material, the sea slug’s intestines form cell pouches to engulf entire cell parts, thus the ability to photosynthesize! 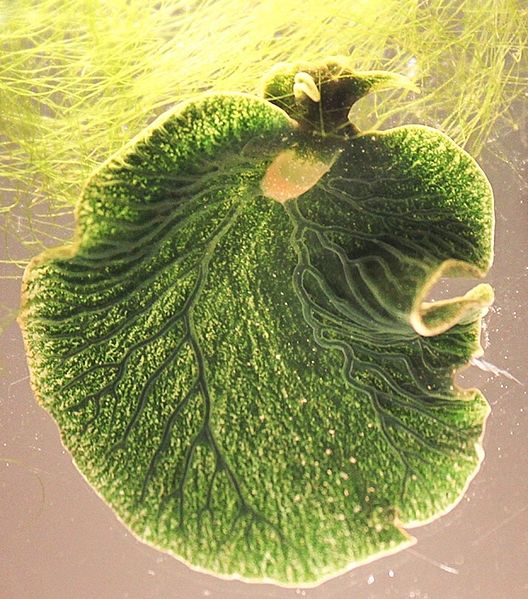 A Green Sea-Slug photosynthesizes by ingesting chloroplasts and using them to its own benefit. (Photo Credit: Karen N. Pelletreau et al./wikimedia commons)

Ambystoma maculatum. Quite similar to a sea-slug, the spotted salamander also maintains a symbiotic relationship with green algae cells. The chloroplasts in this creature are found near the mitochondria of the cell, which are directly consuming the oxygen and carbohydrates created through photosynthesis.

The most astounding part of this relationship is that all vertebrates have robust immune systems, destroying any foreign material entering the bodies. This makes the spotted salamander an intelligently immune vertebrate that has the ability to photosynthesize. 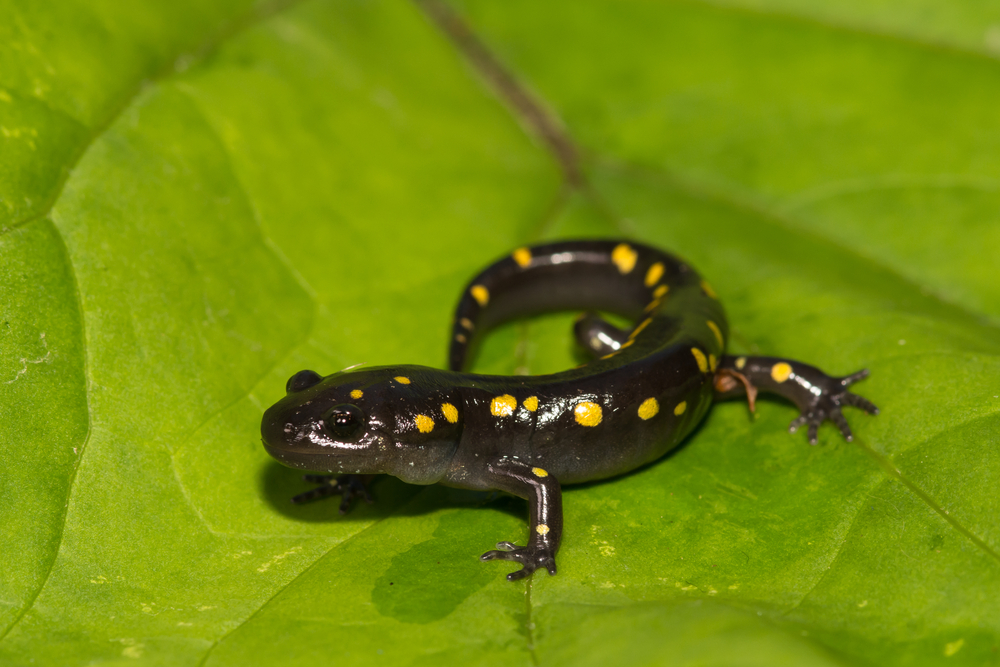 A Spotted Salamander enjoys an easy life by not having to expend energy in hunting, as it gets it from the sun. (Photo Credit: Jay Ondreicka/Shutterstock)

Vespa orientalis. Unlike the “chloroplast stealing” sea slug and spotted salamander, this photosynthetic insect’s yellow patches contains xanthoperin, a chemical that actively absorbs light and converts it to electricity.

This is achieved by the microscopic grooves in the hornet’s body, which trap photons from the sunlight, engaging with the xanthoperin and building up the voltage that is necessary for generating current. This current helps the hornet in darkness and serves an integral part in the development of its pupae. Compared to other wasps, oriental wasps are more active and lethal. 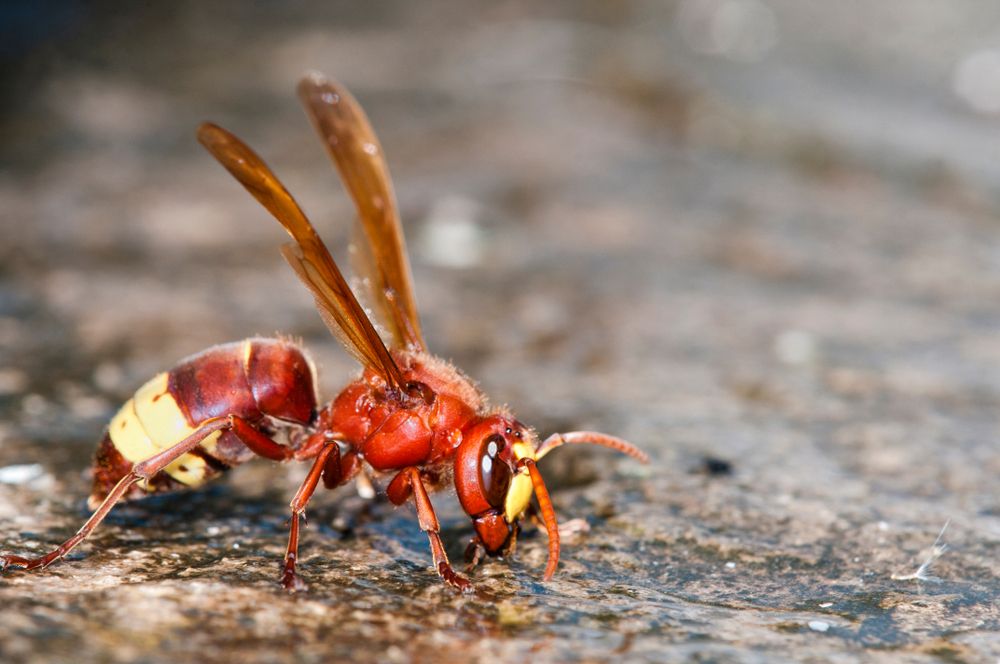 An Oriental Hornet is tremendously active, as compared to its wasp relatives, while the flashy yellow spots also help to intimidate predators. (Photo Credit: ASakoulis/Shutterstock) 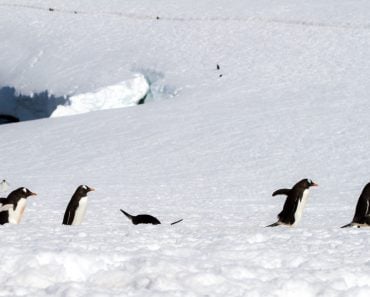