Light pillars are optical phenomena that occur in extremely cold atmospheres, when flat ice crystals form close to the ground. They reflect natural and artificial light in columns that extend through the sky.

When the night grows frighteningly dark and the temperature hovers near freezing, you probably can’t even imagine coming out of your house. However, if you’re lucky and take a look outside, you might just see mysterious beams of light stretching up into the sky. These stunningly colorful displays of light may seem supernatural, but they are nothing but simple optical atmospheric phenomena. These types of light pillars have been spotted in many different parts of the world in varying colors, depending on the color of the source light that they reflect.

Nature and its mysterious sources of beauty never fail to surprise us. These light pillars are no exception, but there is even more to learn about these strange visual delights! 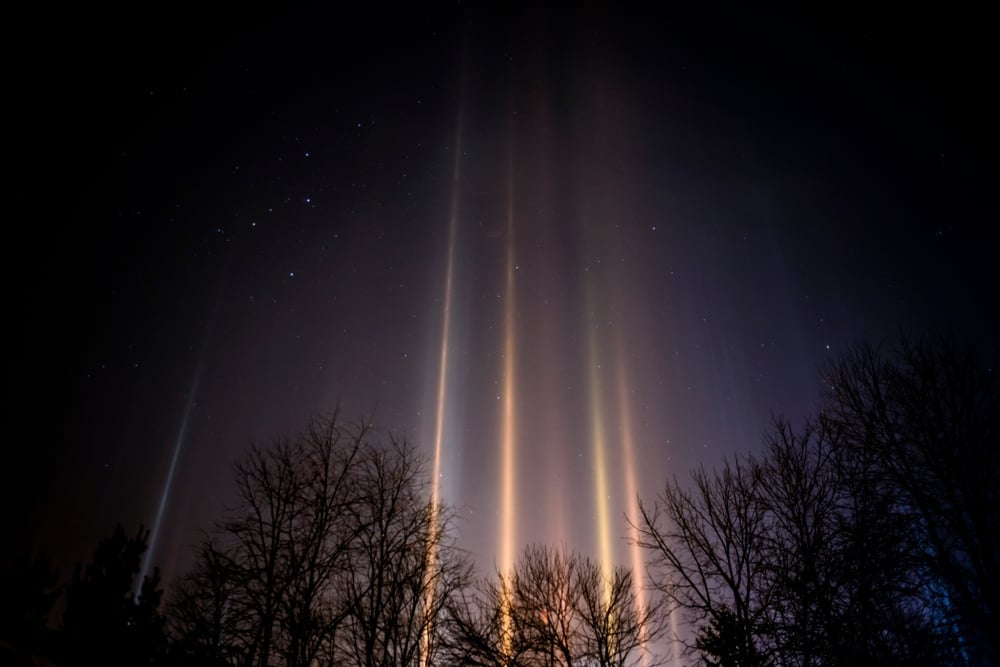 How Are Light Pillars Formed?

This truly amazing optical phenomenon is visible only in extremely cold temperatures when ice crystals form in the atmosphere. These plates of ice crystals orient themselves hexagonally as they drift down through the atmosphere. Their collective surfaces act like a giant mirror that reflects the light falling on them. The light being reflected will extend to a certain distance both above and below the light source. The denser and larger ice crystals, the more pronounced this effect becomes.

The light sources involved could be street lights and other ground light sources, or even the sun or moonlight. The angle of the ice crystal surfaces will deviate a few degrees from the horizontal orientation, which causes the light pillar, as it elongates the reflection of light. Thus, these phenomena usually appear as columns of lights to an observer. 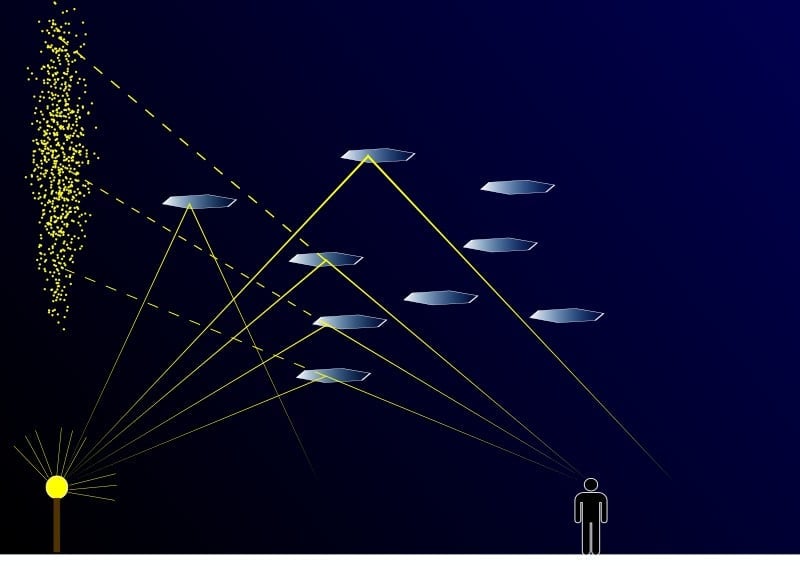 For a light pillar to form, the atmosphere must be calm and cold, with an absence of wind. Although wind is not directly tied to this phenomenon, it will likely disrupt the reflection of light.

A light pillar is not physically located either above or below a light source. Also, do not consider these light pillars to have the properties of the light beam just because they look similar. A light beam is a directional projection of light energy from a radiating source such as lamps, torches, etc., Whereas Light pillars are just an illusion created by the ice crystals reflecting the light. All ice crystals present in the atmosphere reflect the light from the source. But only those crystals that are aligned in a common vertical plane will direct the light towards the observer. Also, one might think that these are the lights traveling into space. But, what is happening is contradictory. The lights that are traveling into space from streetlights, sun or moon are getting reflected back by the ice crystals.

Also Read: Sun Dogs: What Are They And How Are They Formed?

This effect is similar to the reflection of a light source in a body of water. A setting or rising sun often creates glittering of light across the water bodies like lakes, rivers, etc., These are generally called glitter patterns. It is because the light from the sun gets reflected at various points on the water surface. These reflections can meet at a common point (the observer) and appear like a beam of light over the surface of the water.

How Rare Are Light Pillars?

Light pillars typically occur in Arctic regions due to the extremely cold temperatures required for such an event and are more common in winter and fall. However, they have also been observed in Iran, where the deserts can get extremely cold at night. On rare occasions, small light pillars may even be seen extending from bright planets like Venus!

They have also been observed in other regions of the world and in different colors, depending on the light source. They can be a basic color when reflected from street lights, but could also be strikingly vivid when they reflect brighter colors. They typically appear soft and gentle when they take up ambient light sources. In any case, light pillars are a visual treat to any observer.

How Are Sun Pillars Different From Sun Dogs?

Sun pillars, sundogs, light pillars… all of these phenomena fall under a family called “halos”. They’re formed by the same factors, namely ice crystals, and light, but they differ in the way they refract or reflect the light. Often, their appearance is fleeting since they require just the right sort of ice crystals falling through the horizon. Also, the clouds must be thin, so that enough amount of light reaches our eyes to witness the wonder. The high-level cirrostratus clouds enhance this phenomenon.

Sun dogs are formed by the refraction of light through ice crystals at exactly 22 degrees. They also form a ring around the sun or moon due to the bending of light (more details here), whereas light pillars are formed when light is reflected off the surface of ice crystals, rather than bending or refraction.

Sun pillars also occur as a result of the reflection of light off ice crystals. Since the source of light in this case is the sun, they are named sun pillars. For sun pillars to be visible, the sun must be at the horizon. The shape length and width of the sun pillars also vary according to the position of the sun in the sky. A similar effect is also observed when the moon acts as the light source. 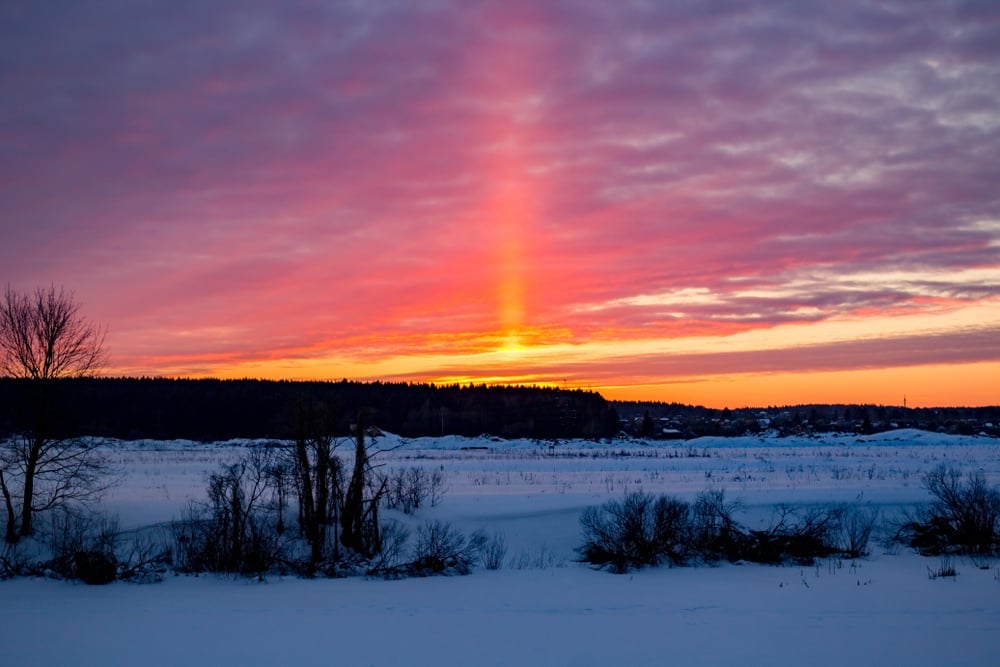 Also Read: Circumhorizontal Arc: What Is A Fire Rainbow?

People often confuse this phenomenon with UFOs, as it is quite natural to be scared by an unanticipated beam of light that seems to arise from nowhere. It’s no wonder that some people imagine them to be the lights from an alien ship. Many such false UFO sightings have been reported, particularly near Niagara Falls. The mist around the falls often leads to the formation of ice crystals closer to the ground. These ice crystals reflect off the city lights, creating prominent light pillars that mesmerize observers for miles around.

However, these light pillars are not the evidence of aliens, just a reminder that nature has a unique way of leaving us bewildered with its stunning beauty when we least expect it!