A sun dog is an optical atmospheric phenomenon that causes bright spots at an angle of 22 degrees on one or both sides of the sun. It is also called a mock sun or parhelion in meteorology. Sun dogs occur as a result of the refraction or scattering of light from flat hexagonal-shaped ice crystals that are suspended in clouds.

Sun dogs? Is that a hybrid dog breed? The name certainly sounds peculiar! Do they bite or wag their tails? Not even close. Sun dogs are natural phenomena in the sky that occur under specific conditions. Like so many good things, the beautiful natural combination of colors doesn’t last long, like fleeting rainbows or sky dances in the west, which come and go in a hurry. Nature showcases its mysteries proudly, but only for a short time.

Have you ever seen a triple sun in the sky? Or a bright circle appearing to gleam around the sun? If yes, then you’ve actually spotted sun dogs before! These brilliant arrays of color form around the sun, often appearing on winter afternoons or an hour before sunset during the hot summer. Whenever you see such a phenomenon, you can be sure of one thing—there is ice up in the sky! This ice can reflect, refract or scatter light in many different ways, which leads to the formation of sun dogs. Sometimes, this phenomenon even makes it look like there are three suns in the sky. Most of the time, sun dogs occur when the sun is below the horizon during winter under high pressure systems. 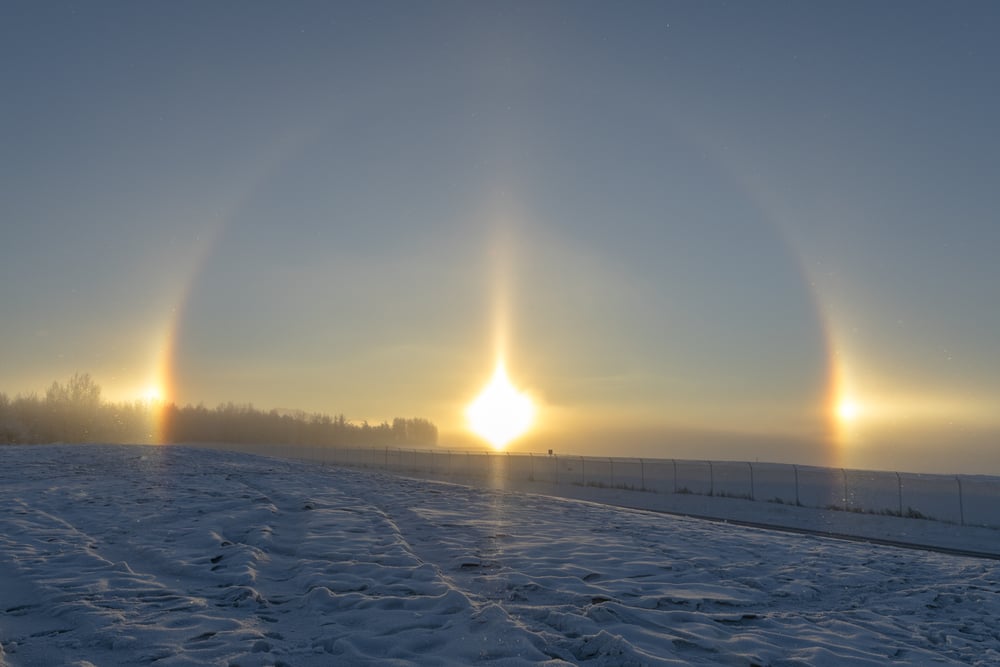 How Do Sun Dogs Occur?

Sun dogs are formed by hexagonal ice crystals suspended in clouds that drift in the air at lower levels. These ice crystals act as a prism, bending the light rays that pass through them. As the crystals sink vertically through the air, they refract the sun rays horizontally, leading to the formation of sun dogs. Sun rays enter one side of the crystal and pass through another, inclined at 60 degrees to the first. Rays are deviated by 22° or more. Red is the less deviated color, giving the sun dogs a red inner edge. Farther out, the colors fade from shades of orange to blue. Mostly, the colors overlap and eventually result in varying shades of white. These rays deviate through other angles and form halos around the sun. 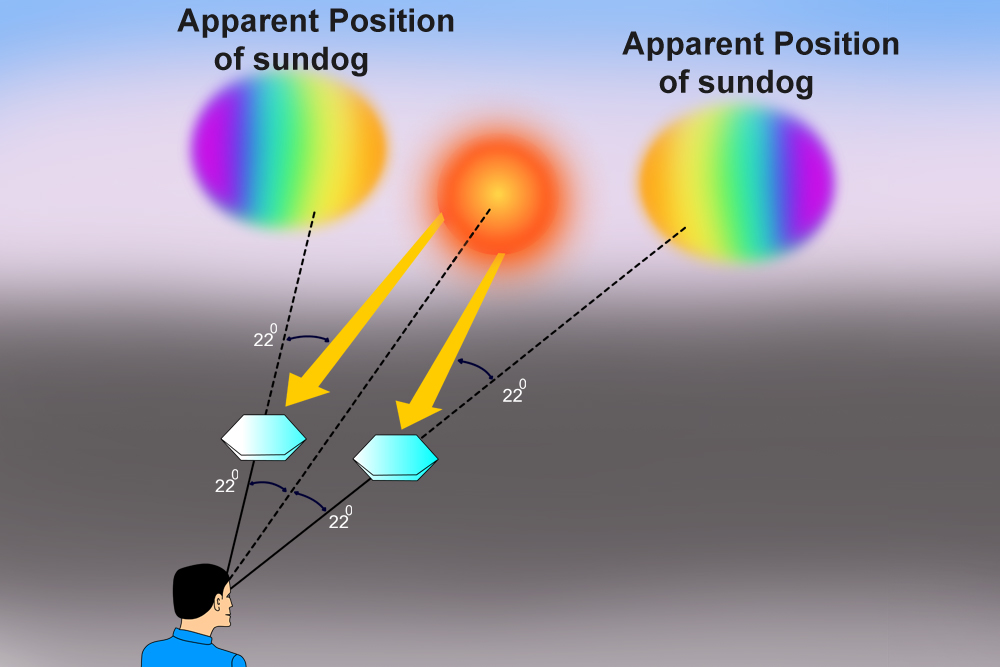 All crystals refract the sun’s rays, but we only see those rays that direct the lights towards our eyes. These are the crystals that are at 22° from the sun. Their collective glints form sun dogs. At times, these appear as broken fragments of a rainbow and in other cases, they appear like an entirely other sun. They can last from 15-30 minutes, depending on conditions. The shape of the crystals determine the form of sun dogs, which could be either a complete circle around the sun, called a halo, or two bright spots on either side of the sun. The distance between the sun dog and the sun affects the color of the sun dog. More clear and visible sun dogs occur when the horizon is very near to the sun. As the sun rises, the sun dogs begin to fade, since the rays passing through the ice crystals are skewed and the angle of deviation increases.

Also Read: Circumhorizontal Arc: What Is A Fire Rainbow?

There are many beliefs and sayings about sun dogs. Ancient Greeks believed that sun dogs signified an upcoming storm. Some people also believed that sun dogs meant it would be a fair weather day. Also, if a sun dog appeared in early December or late January, people used to say, “Tonight will be clear as a bell and cold as hell.” Sun dogs are often seen as a sign of upcoming rain or snow, and generally imply good fortune.

This phenomenon also occurs in relation to the moon, which is (unsurprisingly) called a moon dog. This is less significant and far more rare, since moonlight is not as bright as sunlight. It is also observed that this phenomenon occurs on other planets, such as Neptune, Uranus, Jupiter and Saturn. In the case of those planets, sun dogs are formed by both water-ice and CO2 ice. Clearly, sun dogs are one of the most astonishing, entrancing and widespread mysteries of nature!