The northern lights, or aurora borealis, are one of the most beautiful natural phenomena in the world. They occur when charged particles from the sun interact with the Earth’s atmosphere and create a light show in the sky. The different colors of the aurora are caused by different gases in the atmosphere, and the unique shape of the aurora is caused by the Earth’s magnetic field.

Beauty being in the eye of the beholder is a wise adage, but it doesn’t apply to the Aurora Borealis, because the Aurora Borealis is a unique and beautiful creation from Mother Nature herself. Apart from its intrinsic beauty, the Aurora borealis is a combination of beautiful physical concepts blending together to bring about this fascinating phenomenon. An aurora, as it is commonly known, is also referred to as a polar light. The term “aurora borealis” indicates the aurora in the northern hemisphere, while the aurora seen in the southern hemisphere is known as the “aurora australis”. Before we get into the reasons as to why the aurora occurs, let’s first take a look at where they happen.

The occurrence of auroras is usually in a band known as the “aurora zone.” The aurora zone is generally present from approximately 3° to 6° wide in latitude and between 10° and 20° from the geomagnetic poles for longitudes. Although the auroras are present during the day time in a faint hue, they are far more prominent at night. Auroras have a unique property—occasionally forming pockets and gathering together in what are known as aurora ovals. These aurora ovals were identified and established by  Elias Loomis (1860), and later on by Hermann Fritz (1881).

Auroras can be viewed in two major forms. They can be in either a diffused form or more like the “famous” form that most people associate with auroras. The brightest of these forms of auroras are the curtain-like ones. The curtain-type aurora is formed by parallel rays, each oriented in the direction of the local magnetic field. These curtain-like auroras are not usually linear and take the shape of an arc which accentuates the intensity and vividness of the auroras. These curtain auroras can become so bright that a person can read comfortably at night without any other source of light.  A diffused aurora, on the other hand, is relatively featureless in its glow. 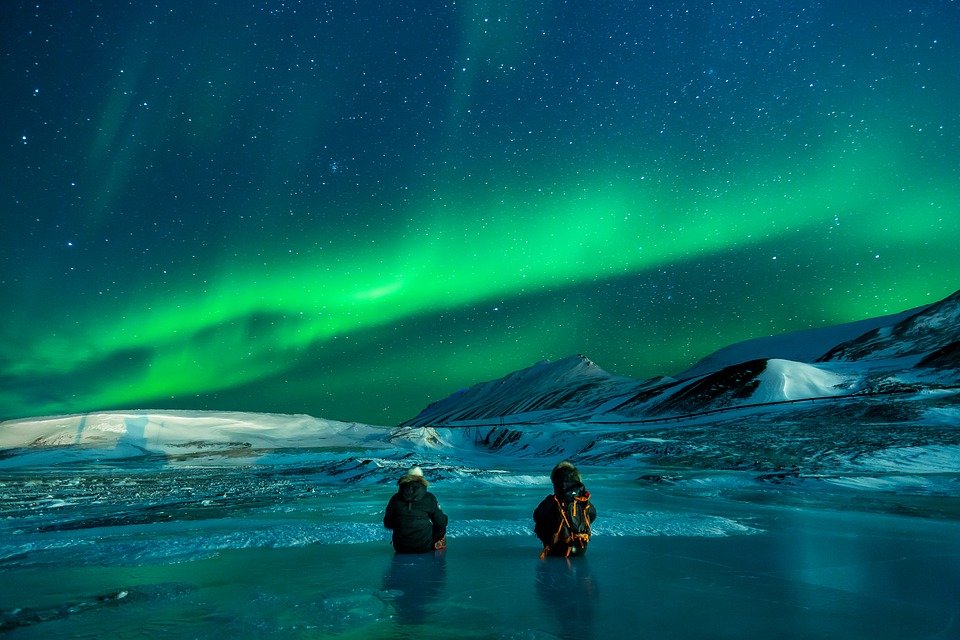 An aurora is commonly seen as a striking green color, but it also occasionally shows off in many other colors, ranging from red to pink, blue to purple, dark to light. The reason that the aurora appears in so many colors is that our atmosphere is made up of many different compounds, such as Oxygen and Nitrogen, among others. When the charged particles that come from the sun hit the atoms and molecules of Earth’s atmosphere, they excite those atoms, which then give off light. Different atoms give off different colors of the spectrum when they’re excited. A familiar example is the Neon lights that we see on many signs in our flashy, modern world. Neon lights contain the gas Neon. These lights have electricity run through them, which excites the Neon gas. When the Neon is excited, it gives off a brilliant red-orange color. Neon lights are based on the same idea as the Aurora, only on a much smaller scale.

Also Read: Where On Earth Can You See This Breathtaking Sight?

As mentioned, different gases give off different colors when they’re excited. Oxygen at roughly 60 miles up gives off the familiar yellow-green color, while oxygen at higher altitudes (about 200 miles up) creates the all-red auroras. Ionic Nitrogen produces blue light, while neutral Nitrogen gives off the red-purple color and the rippled edges. 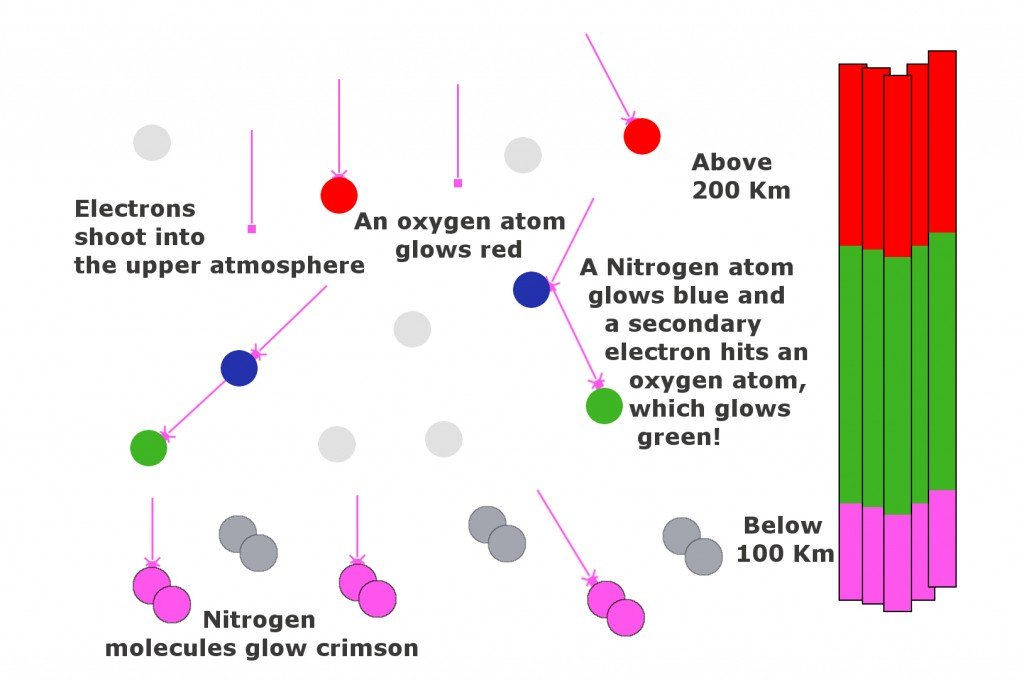 Now comes the part where the “ammunition” must be fired. These tiny energized particles (primarily the electrons) accelerate along the magnetic flow to the northern hemisphere. Here they collide with gas atoms in the northern hemisphere and give off energy in the form of light. The Sun also plays a vital role in the formation of an aurora. The Sun’s atmosphere is made of hydrogen, which itself is made of subatomic particles: protons and electrons. These particles are constantly boiling off the Sun and streaming outward at very high speeds. Together, the Sun’s magnetic field and these loose particles make up the “solar wind.” This solar wind constantly pushes on the magnetic field of the earth, altering its shape.

This is the point where the big push happens. We have the Earth’s magnetosphere, which is constantly being squeezed by the solar winds from the Sun. Solar particles are always entering the tail of the magnetosphere due to solar wind and moving towards the Sun. Occasionally, when conditions are right, the build-up of pressure from the solar wind creates an electric voltage between the magneto-tail and the poles, like the voltage between the two terminals of a battery. It can reach up to 10,000 volts! This voltage accelerates the charged particles even faster and they zoom along the field lines towards the ground to the north and south, until vast numbers of electrons are being pushed down into the upper layer of the atmosphere, called the ionosphere.

In the ionosphere, the electrons speed up and collide violently with gas atoms. This gives the gas atoms energy, which causes them to release both light and more electrons. In this way, the gases of the ionosphere glow and conduct flowing electric currents into and out of the polar region. The electrons flowing back out don’t have as much energy as the speedy incoming ones had, as that excess energy went into creating the aurora.

Now, the next time you look at an aurora in real life, or even in a picture, you’ll know a bit more about the complex forces that come together to cause this beautiful phenomenon!