The ‘Zero Shadow Day’ is a peculiar phenomenon that occurs twice a year. It occurs when the sun rays fall exactly perpendicularly on an object, so it seems as if no shadow is being cast.

My little cousin, who is around two years old, discovered his shadow very recently. At first, he was intimidated by it, but gradually started to enjoy dancing with his new ‘light-weather’ companion.

This reminded me of the science class where I learned about shadows and an uncommon phenomenon known as the ‘Zero Shadow Day’.

In this article, we’ll take a comprehensive dive into this rare event.

How are shadows formed?

A shadow is an area of darkness formed due to a blockage in the path of the light rays. When an opaque object is placed in the path of the rays of light, the object casts a shadow on another object behind it (like the ground or a wall).

This happens because light travels in straight lines. Normally, light doesn’t bend and pass around an object.

The center area of the shadow is the darkest, as it receives a negligible amount of light and is called the umbra.

The rest of the shadow is lighter, moving outwards from the umbra, because some amount of light still reaches it. This area is called the penumbra. The diagram shows the formation of shadow by a large or extended source of light. (Photo Credit : zizou7/Shutterstock)

The type of shadow is determined by the position and intensity of the source of light. When the light source is like a point, then only the umbra region is present in the shadow. Whereas, an extended light source produces a shadow with both the umbra and penumbra regions. The diagram shows the formation of a shadow by a point source of light. (Photo Credit : zizou7/Shutterstock)

Why does the sun cast a shadow?

The sun is a source of light, hence it is capable of producing a shadow. The light rays from the Sun travel towards the Earth in straight lines. When an opaque object is placed in its path of travel, it doesn’t allow the rays to pass through them, and instead casts a shadow of that object on the other side.

Note that transparent objects don’t cast shadows because they allow light to pass through them, offering no blockage to the path of light.

The length and intensity of the shadow formed by the sunlight depend on the position of the Sun and its intensity. For example, the shadows formed in early mornings and late afternoons are lighter and more elongated in shape, but the shadows are shorter and darker at noon, when the Sun is overhead. 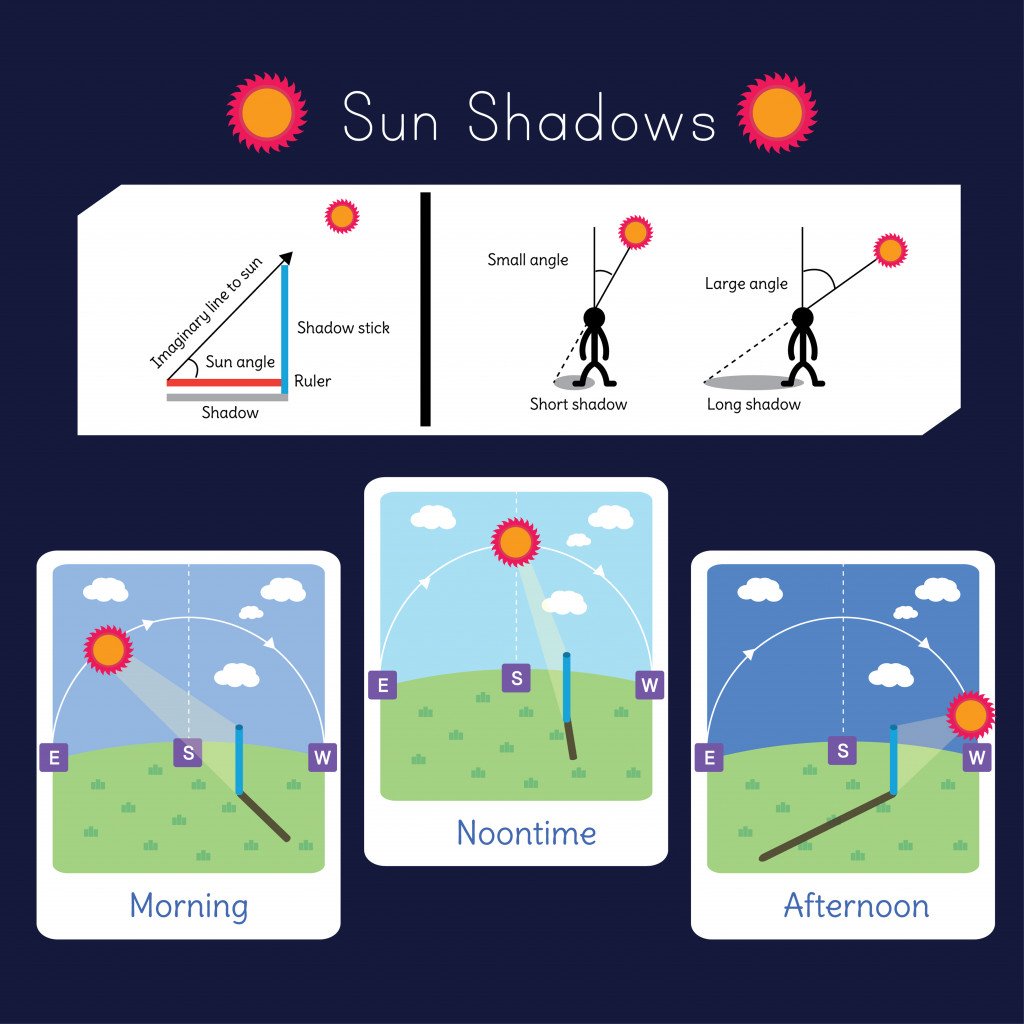 The different angle of incident rays of the Sun result in different lengths and shapes of shadows throughout the day from morning to afternoon. (Photo Credit : udinmaker/Shutterstock)

The catch here is that the Sun doesn’t always cast a shadow. This is exactly what the ‘Zero Shadow Day’ phenomenon refers to.

What is the ‘Zero Shadow Day’?

The ‘Zero Shadow Day’, as the name suggests refers to the day when the Sun’s shadow is exactly beneath the object, so the object appears to be casting no shadow.

It is a biannual phenomenon that occurs in regions between the Tropic of Cancer and the Tropic of Capricorn. On the day of Zero Shadow, the shadow seems to disappear for one particular position.

This phenomenon may last only for a few seconds, with its effect lasting for up to a minute to a minute-and-half.

Why does the ‘Zero Shadow Day’ Occur?

On the ‘Zero Shadow Day’, the Sun follows its exact path from sunrise to sunset. The rotation axis of the Earth is inclined at an angle of 23.5 degrees with its plane of revolution around the Sun.

Therefore, for people living between 23.5 degrees North and 23.5 degrees South latitudes, the Sun’s declination becomes equal to their latitude twice a year, when the Sun moves towards the North, known as the Uttarayan, derived from Sanskrit, meaning the Sun’s northwards journey from Winter Solstice to Summer Solstice (December 22nd to June 21st), and when it moves towards the South, known as the Dakshinayan, derived from Sanskrit, meaning the Sun’s southwards journey from Summer Solstice to Winter Solstice (June 21st to December 22nd). This gives rise to the ‘Zero Shadow Day’ phenomenon twice a year.

On this day, the Sun is exactly at the zenith (or the highest point of the sky) and the rays fall exactly perpendicular to the object. This makes the shadow fall directly under the object, so no shadow is visible. During the ‘Zero Shadow Day’ phenomenon, the shadow isn’t absent, but lies exactly beneath the object. (Photo Credit : Times OF India)

This phenomenon happens at different times at different places, according to their latitudinal positions. In India, it happens in the month of April-May and August-September.

People living in the Indian states of Chennai and Mumbai are most likely to observe the ‘Zero Shadow Day’ because they lie between the Tropic of Cancer and the Tropic of Capricorn, but the people residing in New Delhi won’t be able to witness it because it is not between the 23.5 degrees North and South latitudes.

In the USA, Hawaii is the only state to witnesses this bi-annual phenomenon. This event is known as the “Lāhainā Noon” there. The UK doesn’t experience ‘Zero Shadow Day’ at all, owing to its location beyond the Tropic of Cancer.

Like any peculiar phenomenon, the ‘Zero Shadow Day’ has found significance in both history and astronomy.

Eratosthenes, a Greek mathematician and astronomer, used this phenomenon to calculate the circumference of the Earth about 2000 years ago. How? Well, that is a discussion for another article. Scientists and astronomers have used this phenomenon to determine the radius and the speed of rotation of the Earth.

Sometimes, the absence of things can be as fascinating as their presence. ‘Zero Shadow Day’ is one such rare celestial phenomenon that has caught the attention of people around the world since time immemorial. Despite the name being ‘Zero Shadow Day’, the shadow of the object isn’t absent.

It could be used as a day to educate your little ones about the science behind shadows and their formation, or it could be a day to learn about how celestial phenomena have shaped our understanding of the universe!