Jupiter is a planet that does not have a hard, rocky surface like Earth does. If an astronaut were to be dropped towards the planet from above, they would die of radiation poisoning before reaching the surface. However, if they were wearing an indestructible spacesuit, they would start accelerating through the upper layers of the atmosphere and burn up like meteors do before impacting Earth’s surface.

First off, you should know that Jupiter does not have a hard, rocky surface like the one we have here on Earth. Thus, the phrase “stepping on the surface of Jupiter” would not be literally possible, as Jupiter is a gas giant, meaning that it has no hard, solid surface to set one’s feet on.

So, what would happen if an astronaut was dropped towards the planet from above, assuming that they are wearing a spacesuit that is magically indestructible (this is purely hypothetical, of course!)

In order to know what happens then, it’s only fair that we first get a sense of what the phrase ‘surface of Jupiter’ actually means.

As you might already know, Jupiter is the largest planet in our solar system. It’s so large, in fact, that it could fit 1300 Earths inside itself. In addition to being the largest member of our solar system (after the sun), it’s also a gas giant, meaning that it only consists of hydrogen and helium gases, just like the sun.

The stripes that you see on the planet are actually red, yellow, brown and white clouds, all of which are part of Jupiter’s atmosphere.

I have referred to Jupiter’s ‘surface’ a few times in the article so far, but interestingly enough, it doesn’t really have a surface, at least not in the same way our planet does. When someone refers to a planet’s surface, we tend to conjure up the image of rocky, solid ground. Quite amazingly, that’s not true in Jupiter’s case.

Unlike Earth, Jupiter does not have a hard, solid surface. It just a big chunk of gases (and some other stuff) that is pulled together in the shape of a planet. And, similar to Earth’s atmosphere, the gases present in Jupiter’s atmosphere have a ‘ceiling’ or a ‘top’; the layers just keep getting thinner and thinner as you go further away from the planet until, at some point, the atmosphere becomes one with interplanetary space.

So, let’s assume you get dropped from some height way outside of Jupiter’s visible atmosphere. Once you get within around 300,000 km of a particular level (we shall call this level ‘the surface’, because it’s the level where the gas pressure is 1 bar, nearly equal to Earth’s surface pressure), you would die of radiation poisoning… normally. 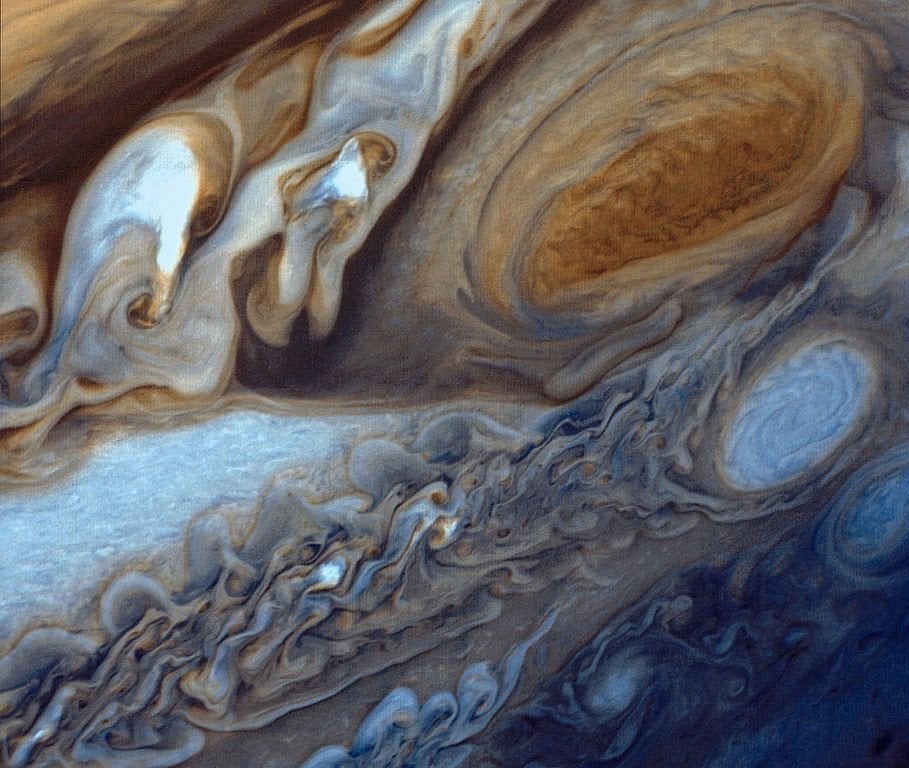 However, since you have an indestructible spacesuit, you actually wouldn’t die. Instead, you would start accelerating (due to Jupiter’s immense mass) through the upper layers of the atmosphere and burn up like meteors do before impacting Earth’s surface.

Going a bit further, if you were somehow dropped in the middle of the planet’s upper atmosphere, even then, you’d fall constantly through ammonia clouds. Fortunately, the fall wouldn’t burn you up at that point, since you are already past the thickest part of the atmosphere. Hence, frictional heating and supersonic compression wouldn’t turn you to ashes.

After a few minutes, you’d still be falling, but through an area where the pressure is 2 bars (twice the average surface pressure on Earth). Here, you would pass through various kinds of clouds made of ammonia ice, ammonium sulfide and ammonium hydrosulfide. 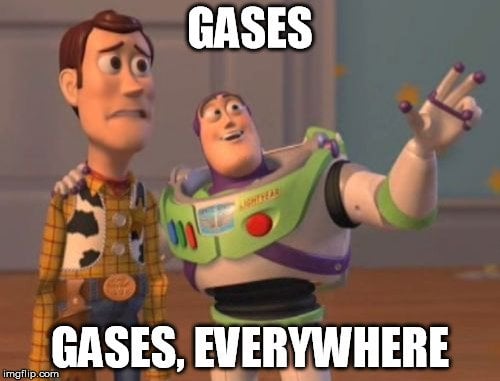 These clouds are not much different than regular clouds, but they are brown and only get browner as you go deeper.

As you keep falling, the atmospheric pressure would continue increasing. The ambient temperature would also be fairly low (to the order of 40 degrees Celsius). You will pass through clouds of water ice, and everything around you will start getting dark. After a few more minutes, you would be in complete darkness, and experiencing temperatures higher than 100 degrees.

The further you fall, the more the temperature would continue to rise. Once you reach the interior regions of the planet (which space researchers don’t know much about), the pressure and density would be so high that their combined effect would bring your speed of descent to an absolute minimum.

This is the level where you’d find a huge ocean of liquid metallic hydrogen, thanks to the extremely high pressure, which converts hydrogen gas to its liquid form. Jupiter has the fastest-spinning speed in our solar system, and as it spins, the swirling, liquid metal ocean creates the strongest magnetic field in the solar system. Trust me, you don’t want to be this guy, unless, of course, you have a magical spacesuit.

Finally, as you reach the level where the pressure is in the order of 2 million bars and a temperature as high as it is on the sun, your descent would come to and end. And so would you.

Space scientists believe that Jupiter has a dense core of heavy elements, and it was created during the early stages of the solar system. This core grew from a cluster of debris, icy material, and other small objects. But it’s impossible to “set foot” on its core, that’s for sure.

Therefore, it’s essentially impossible for any person to set foot on any ‘surface’ of Jupiter.