Barnard’s Star is the second-closest star to our solar system and is rapidly progressing towards it. At such a speed, it will eventually become the closest star to Earth.

Have you ever watched the sky on a clear starry night and wondered about the countless other stars present in the universe? Have you ever wished to see them up close, to experience what our earthbound lives are hiding for us? Well, if you have ever made such a wish, apparently dreams are coming true these days. And while the approaching star will surely make for a mesmerizing view, it will also wreak havoc on our entire solar system.

Astronomers discovered this star, one that falls under the category of Red Dwarfs, in the early 1900s. This star is undoubtedly the fastest we have ever seen. Its speed wouldn’t have been a problem if it were heading somewhere else, but unfortunately, it’s moving right towards our solar system. So… will it collide with us or not? We’ll come to that shortly, but first, let’s learn a bit more about Red Dwarfs.

What is a Red Dwarf?

The Sun is a main-sequence star. This means that it generates its energy by fusing hydrogen atoms to helium. Most of the stars (about 90%) in the universe are of this type, and they are further classified into seven primary categories. Red Dwarf is one of these categories. A red dwarf is a relatively small star with a mass ranging from about 0.6 times or less than that of our sun. Because of their lower mass, red dwarfs have a heating mechanism that is entirely convective in nature. The hot helium formed from the fusion of hydrogen travels to the surface of the celestial body and does not accumulate in the core, which is where most of the fusion takes place. As such, red dwarfs are able to burn most of their hydrogen (their main fuel) and therefore enjoy very long life spans of about 100 billion years. Red dwarfs have the lowest surface temperatures amongst all stars at about 2500K. Their luminosity is also very low and is responsible for the red color visible to us from here on Earth. Because of their low luminosities, planets can revolve very close to red dwarfs and still be habitable. About two-thirds of the stars in the Milky Way are red dwarfs. Estimates suggest that this proportion is even higher in the celestial world outside the Milky Way. Proxima Centauri, the star closest to Earth (other than the sun) is also a red dwarf.

What is Barnard’s Star?

Ophiuchus is a pretty large constellation situated in the celestial equator and looks like a man holding a snake. Just like any other constellation, Ophiuchus has many stars, but it’s mainly famous for being the home of Barnard’s star. Named after American astronomer E.E Barnard, this star is the second-nearest star to the Earth (if the three components of the Alpha Centauri system are considered as one). Most of its physical characteristics are similar to those already mentioned for an average red dwarf. However, its rotation is a little different. Barnard’s star rotates once every 130 days because it has lost a significant portion of its rotational kinetic energy. As and when stars get old, they lose mass because of the continuous removal of gases and radiation; Barnard’s Star is about 8-12 billion years old, which is like the great-grandfather level in the hierarchy of stars. To put this in perspective, our sun is only about 4.5 billion years old and Barnard’s Star is about three times older, placing it amongst the oldest stars in the Milky Way.

Is there an Earth-like planet around Barnard’s Star?

Barnard’s Star might be the most studied star in the universe after the Sun, but not for being the second-closest to our planet. Its distance from Earth might have definitely facilitated its research, but the main reason that scientists spend entire careers studying this star is the possible existence of an Earth-like planet around it. Yes, you heard that right, a planet similar to ours that might be able to host life. 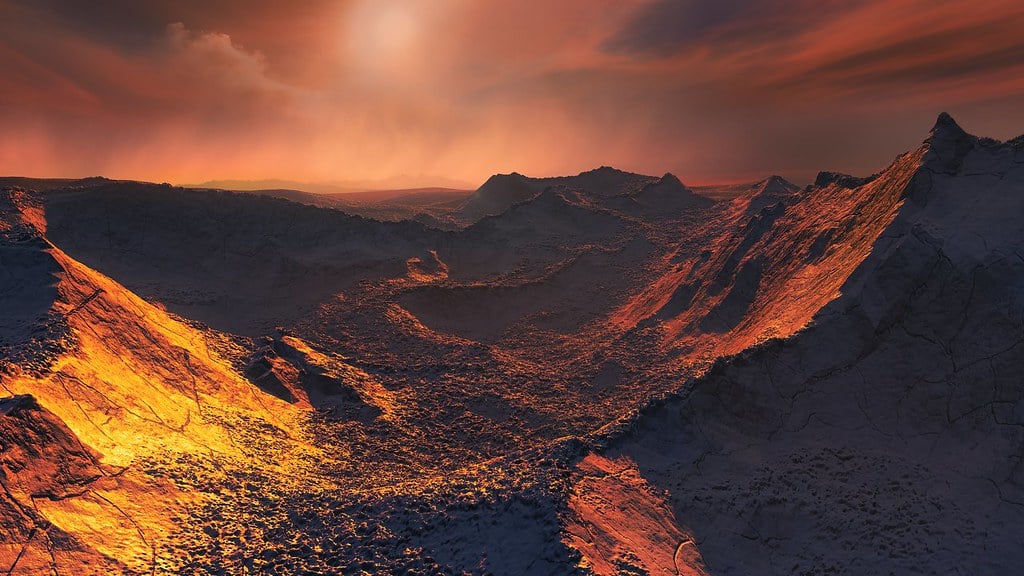 Artist’s representation of the surface of Super-Earth (Photo Credit : Staticflickr)

In 2018, Ignasi Ribas of Spain and her team published their research on Barnard’s Star and claimed the existence of an exoplanet that might be habitable. This planet is just like a super-earth and is called Barnard Star B. A super-earth is a planet outside our solar system that possesses a mass higher than Earth’s, but less than that of Uranus or Neptune. The size of a planet determines whether or not life would be plausible on it. The exoplanet found around Barnard’s Star has the perfect size for hosting life and, as such, drew a great deal of attention. It weighs about 3.2 times as much as Earth and has a revolution period of 233 days. Not bad for a planet about six light-years away.

Is Barnard’s Star moving towards us?

E.E. Barnard wasn’t the first person to observe Barnard’s Star, nor had he revealed any major characteristics of its interior or surface. Still, he remains the only astronomer in history to have his own research star named after him. The reason behind this is that he measured the proper motion (net movement of a celestial body relative to a heavy center of mass and with respect to the cosmic background) of the star, which came out to be 10.3 arc-seconds per year, measured with respect to the sun. You see, every celestial body in this universe is moving with respect to each other. Even if we consider for a second that they’re not moving individually, the continually expanding universe will still change their relative position.

Will Barnard’s Star collide with the Sun?

Barnard’s Star is approaching our solar system with great speed, as mentioned above, and in about 10,000 years it will cover enough distance to displace Proxima Centauri as the closest star to us. However, we don’t need to worry about an eventual collision, as the celestial bodies are moving in arcs, as already indicated by the unit of its speed. Thus Barnard’s Star, which is often misunderstood as the Doomsday star, will start to head back after reaching a point of minimum distance to the sun, roughly 3.75 light-years away, in around 11,800 AD. In other words, we don’t need to worry about its collision with our sun! Even if a collision was inevitable, 10,000 years from now, if human beings have survived, we will hopefully have other options than living in this solar system!