When a human stares out into the deepest depths of space with the naked eye, they can see only a minute fraction of our own galaxy, the Milky Way. The stars are still awe-inspiring, but in recent decades, the advancement of human knowledge about the cosmos has been nothing short of spectacular.

Whereas so many questions about space used to fall into the realm of science fiction or pure speculation, new technology and interstellar ambitions have brought those questions into a more realistic framework.

What is Dark Energy? Is time travel possible? What is our place in the universe? It’s natural for curious, knowledge-seeking beings to ask big questions like this, but as our gaze travels further and further into the darkness of space, one question stands out… Can we reach the edge of the universe?

Discovering The Size Of The Heavens

When humans wanted to take a closer look at the heavens, telescopes were invented, and since then, our fascination with space has hardly slowed. When larger telescopes were eventually developed, we could peer much further, all the way to other galaxies that lay thousands of light-years away. That wasn’t enough though, so massive space telescopes, like the Hubble Telescope and the JWST (NASA’s newest and most impressive space telescope, which you can read about here) have been created. These space telescopes, and those launching in the coming years, are able to see deep into the heart of our universe, areas that are billions of light-years away. Thanks to these incredible marvels of engineering and astronomical insight, we have a more complete image of our visible universe.

Now, the visible universe consists of the matter, galaxies, and phenomena that can be seen by us from a single point (Earth), as a result of light and other signals from those compounds, events, and distances have had enough time to reach us since the cosmos began expanding. We have been able to detect light from approximately 14 billion light-years away, which is how we know that the Big Bang happened roughly that long ago. However, that isn’t the whole story. Our universe is expanding, so while the light from 14 billion light-years away is just reaching us now, that same point of origin has spent the last 14 billion years expanding away from Earth, placing it a total of nearly 42.5 billion light-years away. We can’t see that far, but we can detect the traces left behind and draw conclusions, which makes it “observable”.

In other words, our observable universe is roughly 93 billion light-years in diameter, but even if you traveled for 93 billion miles at the speed of light, would you be able to get there? The Mysterious “Edge” Of The Universe

Whenever scientists and space experts start discussing the speed of light, something very strange happens. Consensus disappears and people all seem to have their own opinion about the nature, limitations, and special qualities of this holy grail – the universal speed limit.

Also Read: Do Galaxies Receding Faster Than The Speed Of Light Disappear From Our Observations?

What most scientists do agree on is that nothing can move faster than the speed of light; even light and other massless particles and gravitational waves can only move at the speed of light in a vacuum. Having this universal constant has allowed us to learn countless things about the cosmos, and is also the basis of the term “light-year”, which is the distance that light travels through a vacuum in one Julian year. The “speed of light” is approximately 300,000,000 meters per second (roughly 186,000 miles per second).

This gets a bit tricky when you talk about traveling to the edge of the universe, since the universe is not only expanding, but also accelerating. We know this because the galaxies at the far reaches of the observable universe appear to be moving faster than those galaxies closer to us. What is truly baffling is that they appear to be moving FASTER than the speed of light, which would appear to break the golden rule of reality – nothing moves faster than light!

However, we live in a Dark Energy universe, and while the composition, origin, and ultimate purpose of dark energy is not known, we do know that it is causing this seemingly impossible acceleration that drives galaxies beyond the boundaries of physics. In simple terms, the space between galaxies is also expanding, which drives the edge of the universe further and further from us every single second. Therefore, to even dream of reaching the edge of the universe, a spaceship would have to go as close as physically possible to the speed of light, somewhere around 99.9999999%. Unfortunately, since universe is technically expanding faster than the speed of light (due to the expansion of space between matter), it is theoretically impossible to ever reach the “edge” of the universe, since it will always be moving away faster than we could ever move towards it!

Would You Even Survive The Trip?

Now, if you have been doing the math, you’d see that even going that close to the speed of light, the trip to the edge of the universe would take billions of years! Since human beings are mortal, it would be impossible to even survive the trip, right?

Well, due to the peculiar intertwined nature of gravity, speed, and time, traveling that close to the speed of light would actually cause time to pass at a slower rate from the perspective of those who are doing the traveling. While the specifics require a deep dive into Einstein’s theory of relativity, try to understand that at that intense speed, near the maximum velocity of anything in the universe, your journey to the end of the universe would only seem like a century or so had passed to the traveler, even if tens of billions of years had passed from the perspective of Earth. Mind-boggling…. I know. It’s a paradox that has puzzled scientists for the better part of a century, but it’s true! The perception of time by the body and mind can be completely different than what someone else sees and experienced based purely on your point of inertial reference.

The most notable obstacle at this point is light-speed technology. The fastest ship that humans ever sent into the cosmos (Voyager 1) is traveling at 11 miles per second, was launched back in 1977, and it took nearly 40 years for the craft to even leave our solar system. The next star it will encounter will be in approximately 400,000 years. 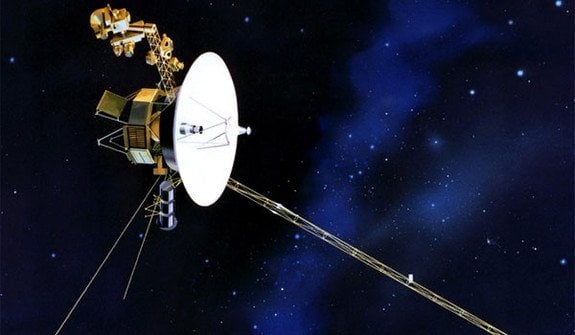 With all of this information, if you’ve been following along with these rough calculations and truly mind-expanding distances, you can see that reaching the edge of the universe consists of some major obstacles. Some of them currently appear impossible to overcome (the perpetually expanding and accelerating universe, for one), but who knows where science and technology will take us.

There is some good news… if we put any stock in science fiction, then faster-than-light travel, wormholes, and teleportation may all come to fruition in the next few centuries! With the help of those wild ideas and endless possibilities, then we may get a chance to peek at the edge of the universe, but until then, it will remain out of humanity’s reach!