We have been observing the planets in our solar system since time immemorial. While Uranus and Neptune were late to join the party, the other planets have influenced humans in major ways, especially in ancient and medieval cultures and traditions.

Then, of course, we have the curious case of Pluto, who unceremoniously lost its status as a planet in 2006.


However, did we only have eight planets throughout the entire history of our solar system? Were there more planets? And if so, what happened to them?

There are a number of answers to this question, but this article will only be about former planets that existed in our solar system and were later expelled. It will not cover subjects like how Pluto lost its status as a planet.

Formation of the solar system and its planets

The solar system started with the gravitational collapse of interstellar gas and dust. Over time, the collapsing material built up so much pressure that the hydrogen began fusing to form helium, which resulted in the formation of our Sun.

Meanwhile, the matter situated farther away from the center of the Sun’s formation, within the protoplanetary disk, also started clumping together. A protoplanetary disk is a rotating disk of gas and dust surrounding a newly formed star. This clumping process continued to form larger and larger objects. It eventually created planets, dwarf planets, and larger moons. This clumping process may take place in several stages. 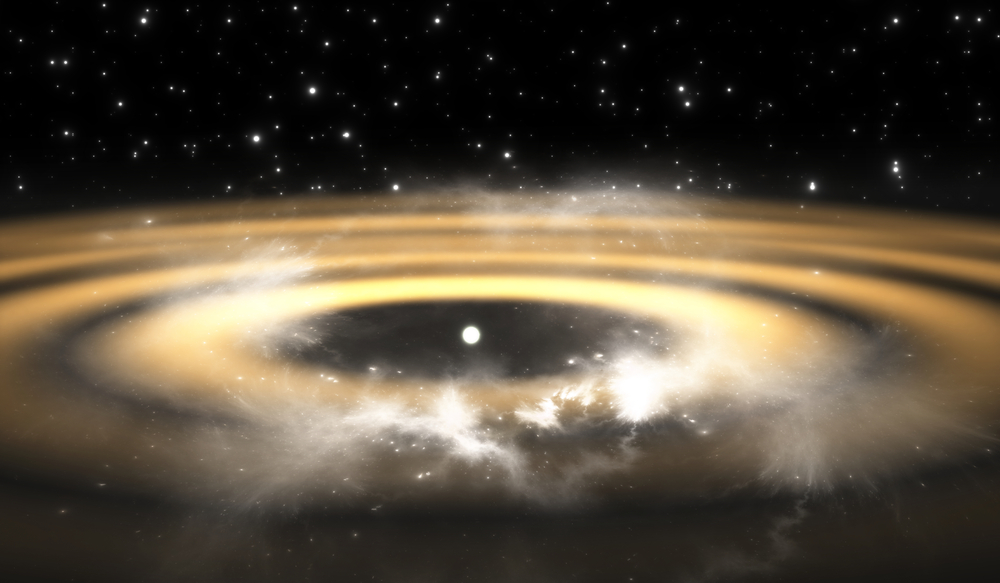 This is an illustration of the protoplanetary disk surrounding a newly born star. The matter present in the disk will eventually give rise to planets, moons, etc. (Photo Credit : Jurik Peter/Shutterstock)

The first stage is the creation of dust from the condensation of gas present in the protoplanetary disk. The dust forms a thin disk, which gradually collapses to form tiny planetesimals. These planetesimals then cluster in large numbers. The speed at which this clustering happens depends on several factors, including the extent to which the surrounding gas slows down these planetesimals.

The planetesimals continue to combine and form larger objects. At a certain point, the planetesimals become large enough such that combination occurs by direct collision. This will create larger planetesimals at much faster rates. The last stage of accretion is the formation of planet-sized objects.

There were also cases in which the clumping did not form large objects. Objects created as a result of those cases include comets, small irregular moons, meteoroids, etc. 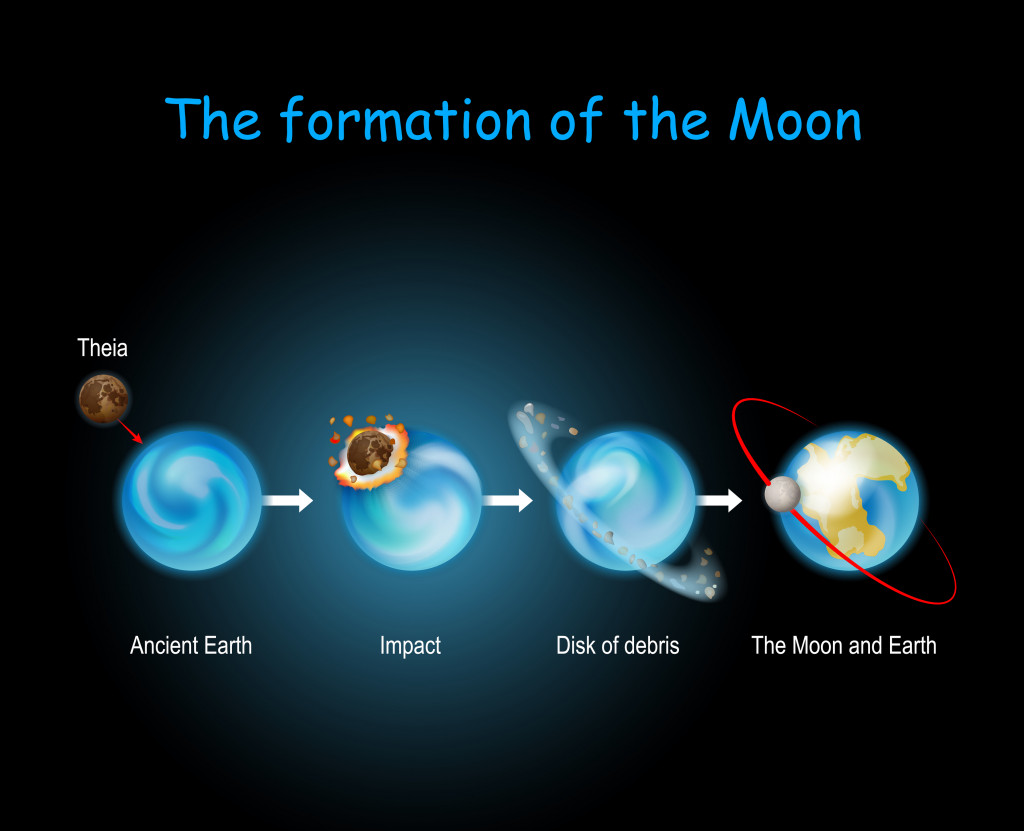 A diagram of how the moon could have possibly formed. This theory requires the existence of a Mars-sized planet, labelled here as Theia (Photo Credit : Designua/Shutterstock)

So, what would have happened to the former planets? There is a chance that some of them may have crashed into each other.

However, some studies indicate that one planet might have been ejected from the solar system, making it a rogue planet. Most of these studies agree that this ejected planet is likely a gas giant or an ice giant. In the following, we will discuss this possibility in more depth.

A study was published in 2011 by an astronomer, David Nesvorný, of the Southwest Research Institute. In it, he ran computer simulations for different initial conditions to study the evolution of the early solar system. The main purpose of his study was to understand the migration of the outer planets. The migration of planets refers to any kind of change that occurs in the orbit of a planet, often when it interacts with nearby gas or other planetesimals. This could either result in an increase or decrease in the size of their orbits.

One of the motivations was that the widely spaced and nearly circular planetary orbits in our solar system are not present in most of the observed exoplanet systems. In the simulations, Nesvorný started with several different initial conditions, including the introduction of a fifth planet between the orbits of Saturn and the gas giants, or after the orbit of Neptune. The mass of the fifth planet was assumed to be the same as that of Uranus. 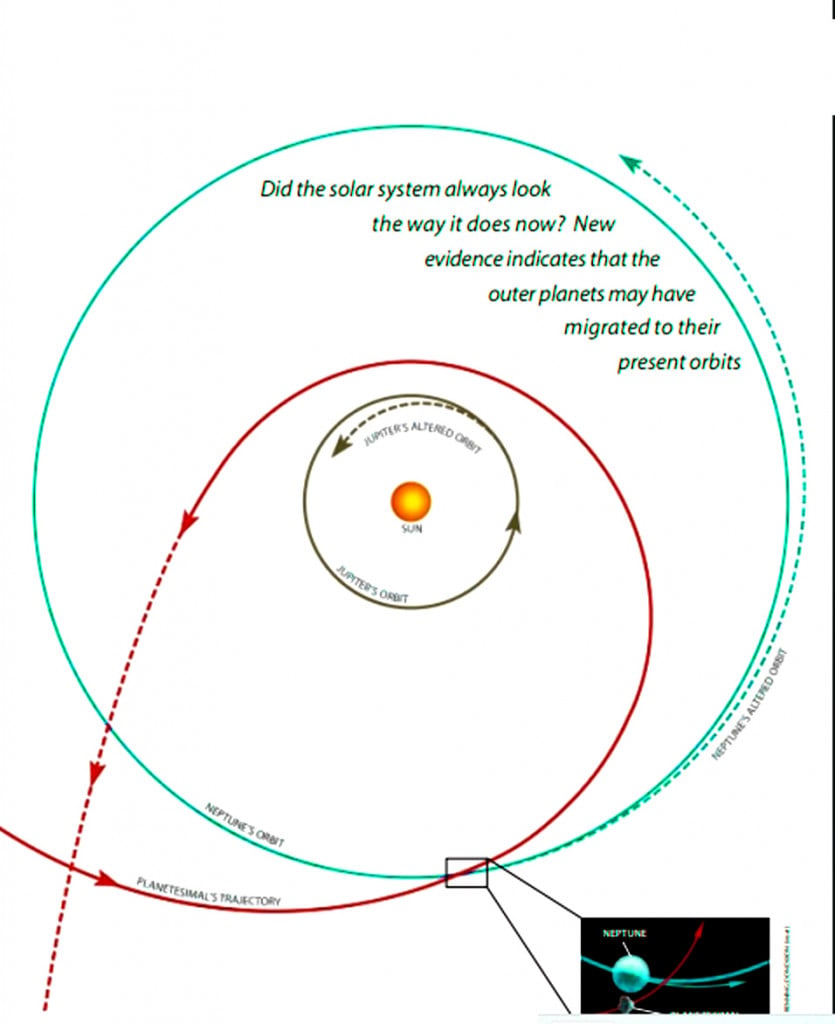 One of the ways in which the ejected planet altered the orbits of some of our gas giants (also called migration). Here, we can see that after its encounters with Jupiter and Neptune, the planet was ejected from the solar system.

Nesvorný’s research put forward some criteria for his simulations to be successful. The first was that the final planetary alignment should have four gas giants, like what we presently have. The second criterion was that these four planets should have orbits resembling the ones present today. The third one set a constraint on the eccentricities of the orbits. Eccentricity refers to how elliptical or circular an orbit happens to be. The last criterion was about the values of the ratios of the orbital periods that Jupiter and Saturn could have.

The study compared the models obtained using the initial conditions of four and five outer planets. It accounts for various factors, including the mass of the protoplanetary disk and orbital resonance (planets having orbital periods that have ratios of small integers).

The results of his simulations indicate that the five outer planets’ initial condition seems to be a much more likely scenario than the four outer planet scenario. According to the simulations, the ejection of the fifth planet occurred around 820,000 years after the solar system was born. The remaining planets then stabilized and migrated to the present orbits we see today.

Could Jupiter and Saturn give us some clues?

In 2015, astronomers Ryan Cloutier, Daniel Tamayo, and Diana Valencia of the University of Toronto performed a similar simulation study. The main focus was to ascertain if Jupiter or Saturn was responsible for ejecting the fifth planet.

Here, they developed models of the possible interactions of the fifth planet with Jupiter and Saturn. With it, they studied how these encounters could have affected the orbits of their moons, especially those of Callisto of Jupiter and Iapetus of Saturn. 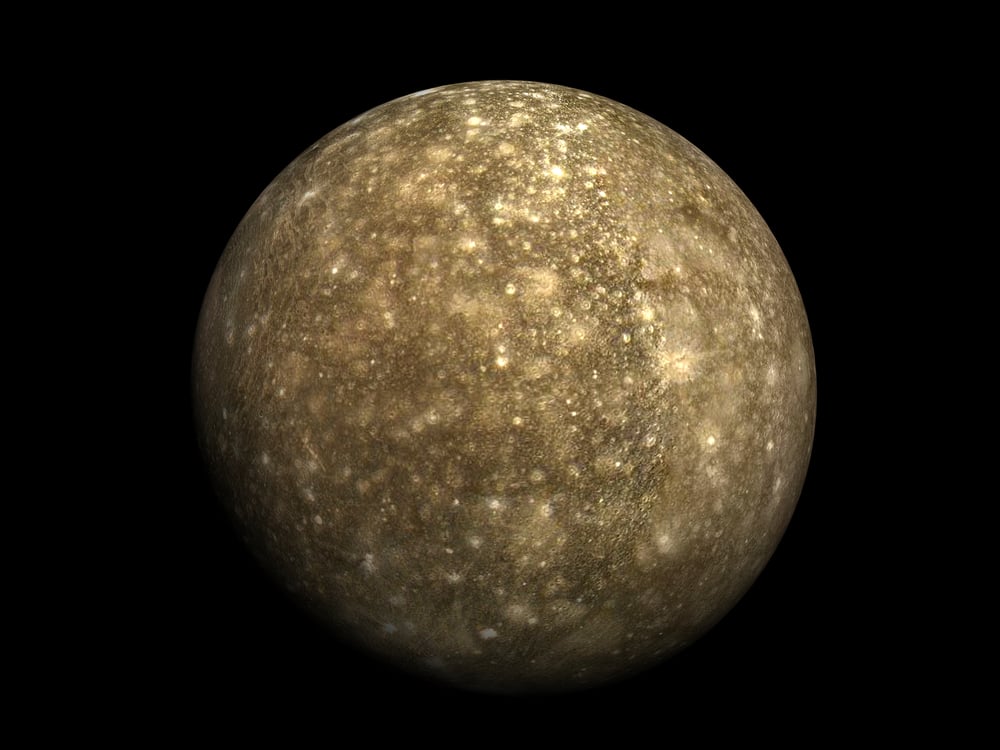 This is an artistic rendering of Jupiter’s moon, Callisto. Callisto was the moon that was chosen to understand the possible effects of the encounter between Jupiter and the ejected ice giant. (Photo Credit : mr.Timmi/Shutterstock)

For this purpose, they ran simulations of close encounters of the gas giants with the ejected planet. Here, they assumed that the ejected fifth planet had a mass equal to that of Uranus. They then modeled the ejections for several values of closest separation distances, starting from 0.02 AU, and increasing it until the encounters no longer led to expulsion.

The simulations seem to indicate that it is plausible that Jupiter could have ejected an ice giant from our solar system. Nearly half of the ejection simulations result in Callisto having an orbit somewhat identical to what we see today.

Meanwhile, Saturn, after an encounter with the fifth ice giant, would result in Iapetus having an orbit that is not similar to the one we see today. This suggests that it is unlikely that Saturn would have ejected an ice giant. However, they also note that the formation of Iapetus is also highly uncertain. Thus, that would affect the certainty of Saturn having had an encounter with and ultimately ejecting the fifth ice giant candidate. 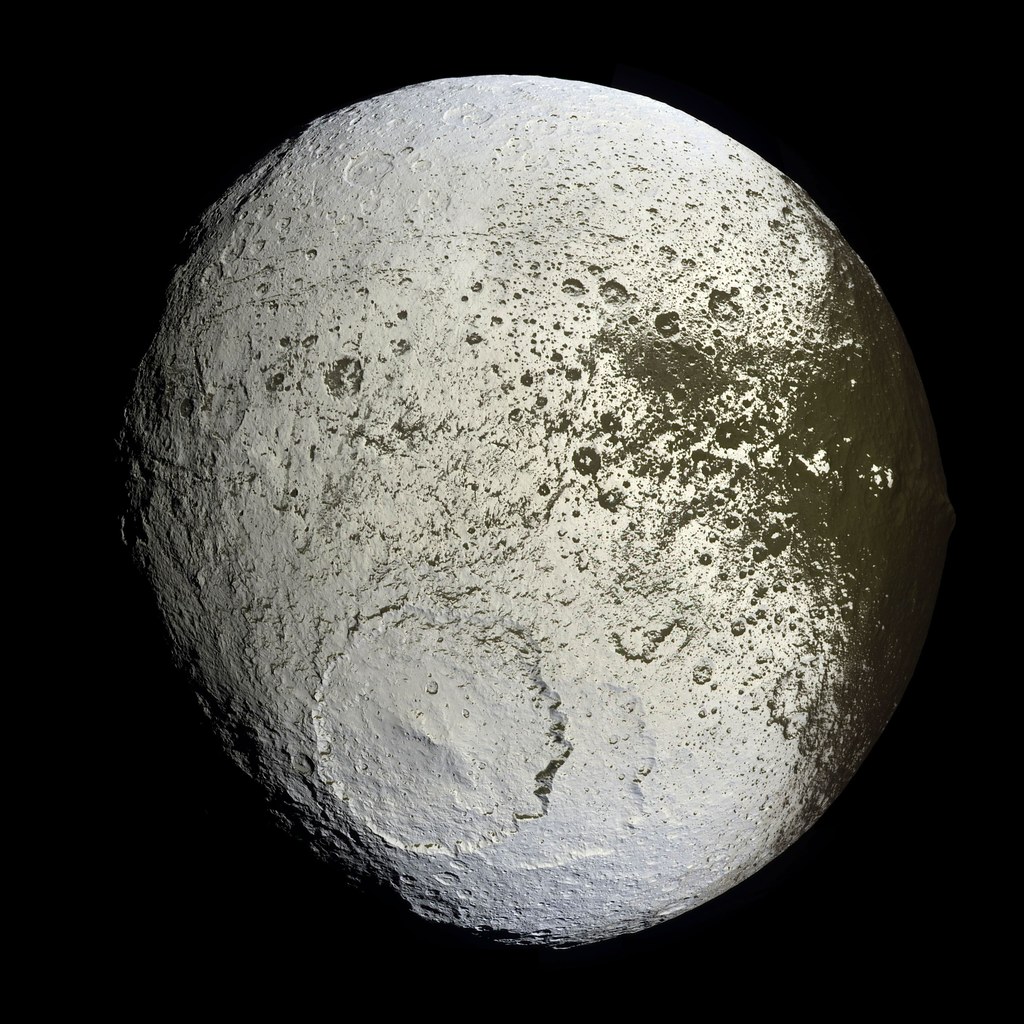 This is the image of one of Saturn’s moon, Iapetus, taken using the Cassini spacecraft. (Photo Credit : Flickr)

The study applied the same four criteria that Nesvorný used in his work. They performed over 6,000 simulations by considering an initial number of four, five, and even six outer planets. Their results also seem to favor the five-planet and six-planet cases more than the four-planet scenario.

The five-planet Nice model was based on Nesvorný’s work discussed earlier, in which the fifth planet was an ice giant located between the orbits of Saturn and Uranus. Follow-up work on this model was conducted by the astronomers Konstantin Batygin and Michael E. Brown of the California Institute of Technology and Hayden Betts of Polytechnic School, California, in 2011.

Their study indicated that starting with five outer planets was neither more nor less advantageous. However, they emphasized that this was heavily independent of the initial conditions, and that the success rates of the five-planet condition were only for the particular model they had developed.

So yes, theoretical implications tell us that the solar system could have had a planet that was likely an ice giant and ejected by Jupiter (or possibly by Saturn). To determine the proof of this theory, we would have to dig into the exact initial conditions of how our solar system started. Finding these initial conditions is, unfortunately, extremely difficult. 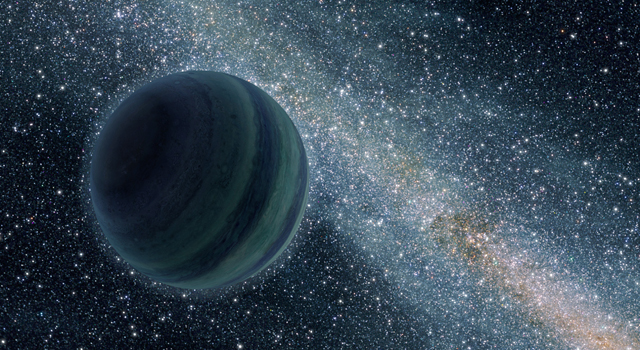 This is an illustration of a rogue planet freely floating in space. While they are extremely difficult to observe, these objects may be more common than stars, indicating that planetary ejections might be a common thing. (Photo Credit : Flickr)

It is also improbable that we would ever observe a rogue planet that was formerly a part of our solar system. In reality, finding rogue planets is difficult. Our best way to determine if the solar system ejected a fifth large planet is from the simulations themselves.