If Earth stopped revolving around the sun, it would either fly out of its orbit and into outer space, or it would fall into the sun. If it flew out of its orbit, everything on Earth would be moving at 30 km/s and would fly off the planet. If it fell into the sun, it would take around 65 days for the planet to crash. During this time, the Earth would experience an intense heat wave, and most of life as we know it would be destroyed.

In one of our articles, we discussed the consequences of a sudden halt in Earth’s rotation. Whether it suddenly stops turning on its axis or does so gradually, it’s bad news for life on Earth. However, what would happen if Earth continued to rotate on its axis, but stopped revolving around the sun instead?

What if a giant, invisible wall stops Earth in its tracks while revolving around the sun?

First off, let me make one thing clear – such a thing can’t and won’t happen. There’s absolutely no external force that could stop the planet in its tracks like that. Therefore, don’t you worry about this happening in real life. However, there’s nothing wrong with investigating the consequences of a hypothetical question…

Right now, Earth revolves around the Sun at a staggering speed of 30 kilometers per second (70,000 miles per hour)! (Source) Of course, we don’t realize we’re going so fast because everything on Earth is moving at the same speed. That means there is no relative speed that could possibly give us any idea of our orbital velocity. 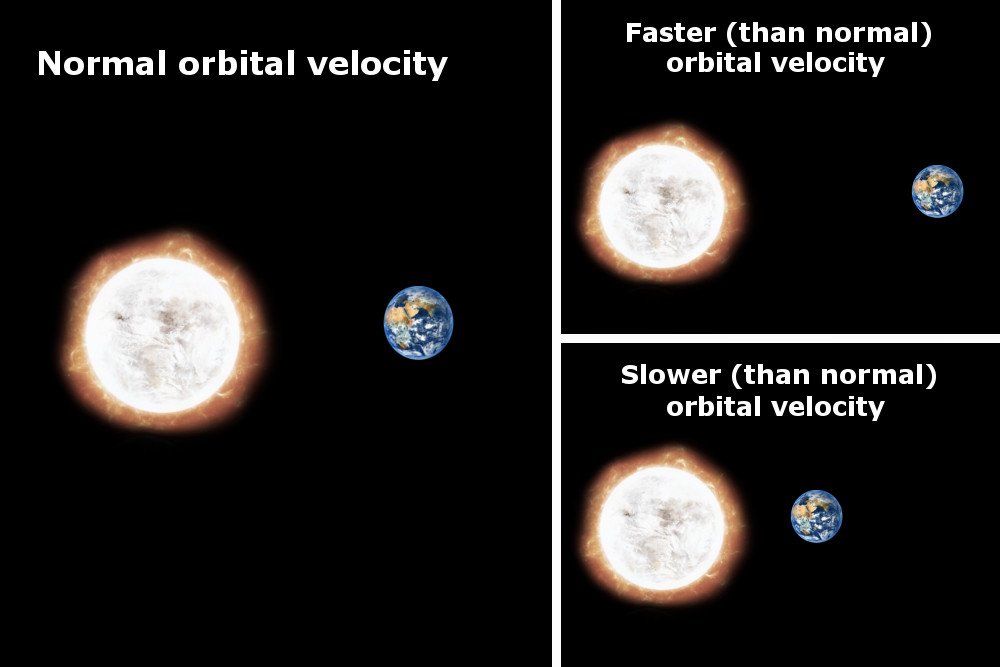 Effects of changing orbital velocity of Earth on its orbit

The Sun, given how mind-bogglingly massive it is, exerts a strong gravitational force on every member of the solar system, including Earth. Therefore, a high orbital velocity is the only thing that keeps us from crashing into the Sun. If the Sun were to disappear all of a sudden, Earth would continue traveling at 30 km/s and shoot out of its orbit to keep going into outer space. If the orbital velocity somehow increased, Earth would attain a higher orbit to compensate for the Sun’s gravitational tug. Similarly, if Earth’s orbital velocity decreased, it would fall to a lower orbit and come closer to the Sun.

What if Earth suddenly stopped revolving around the sun?

To put it in perspective, think of what inertia does to you when a bus driver suddenly applies the brakes. In this case, Earth is the bus and everything that it hosts (including all mountains, seas, rocks and every single lifeform) represent the passengers. Note that Earth’s escape velocity is 11.2 km/s (Source). With an inertia of 30 km/s, things on the leading side would fly off into space, while everything on the trailing side would be crushed against Earth’s surface by an incredibly powerful force. In short, complete destruction in a matter of seconds is what I’m talking about.

What if Earth gradually stopped revolving around the sun?

The effects would be less dramatic, but equally devastating, in this alternative case. With no outward centripetal force to compensate for the strong inward tug of the Sun’s gravity, Earth would begin to fall towards the Sun. 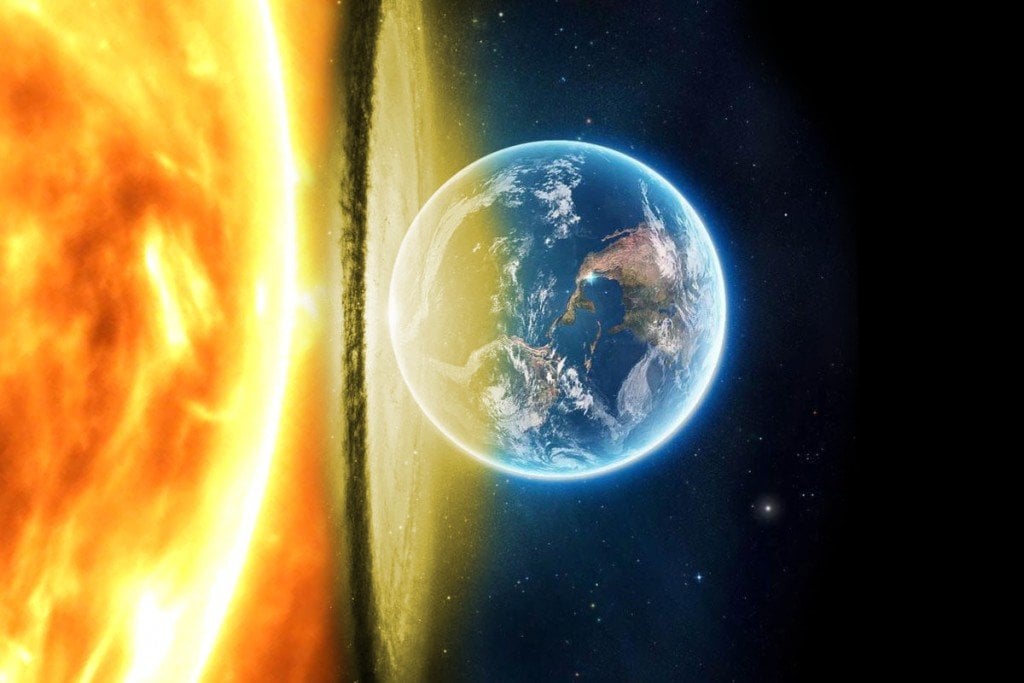 An artist’s impression of Earth crashing into the sun; however, it’s not scientifically accurate, In reality, Earth would disintegrate long before coming that close to the giant ball of heat.

Calculations indicate that it would take around 65 days for Earth to crash into the Sun. During this two-month journey, the Earth would start to show some effects. By the end of a week, Earth’s temperature would increase by 0.8 degrees, and up the 20th day into the plunge, the planet would experience an intense, unbearable global heat wave. 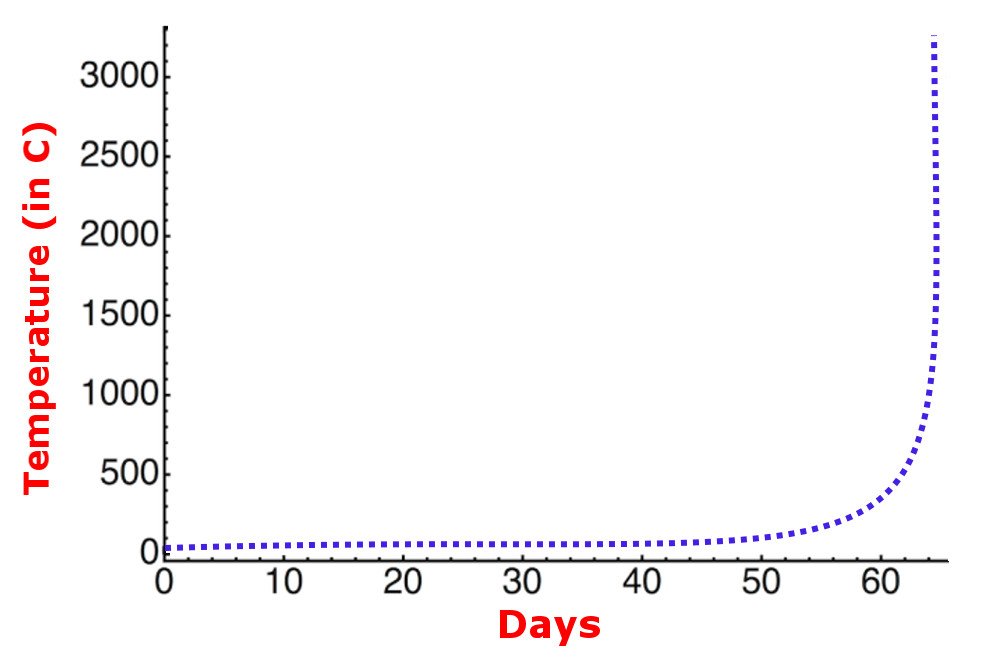 Trend of Earth’s temperature against the number of days of its journey. Notice how most of the action (in terms of the rise in temperature) takes place during the last days of the journey.

The global temperature would increase drastically as the planet closed in on the sun. Wildfires would ravage and scorch the land, oceans would boil and most of life as we know it would be destroyed long before Earth even crossed the orbit of Mercury. Beyond that, Earth would become the closest planet to the Sun (but only for around 7 days) before disintegrating into small bits of magma and melting rock.

But, and this is a big but, as I mentioned earlier, all of this is purely HYPOTHETICAL. Therefore, you can go about doing what you were doing before the idea of a sudden halt of Earth’s revolution was planted in your head by this article. We apologize for any apocalyptic nightmares in advance!