The underground plant ecosystem is a complex network that connects plants to each other via their roots. This network is made up of fungi, which act like underground Internet fibers, linking the roots of different plants. The purpose of this network is to share nutrients and information among the plants.

Let me tell you something, you should never underestimate the power of nature. It has always better than us at everything it does, and this isn’t likely to change anytime soon. In fact, nature is always one step ahead of us, and we depend on it heavily for our survival. At this point,we can safely assume that, ‘no trees’ would basically mean ‘no humans’. That’s the power of nature.

Human arrogance has always led us to assume that we are the highest on the ladder when it comes to evolutionary superiority. However, modern science has discovered something that should take us down a peg or two: There is an underground Internet connection among trees…..Well, not Internet, per se, but something pretty darn close!

More specifically, scientists in the UK have found an extensive underground network connecting plants via their roots.

How is this Possible? The underground plant ecosystem is more complex than you think. It acts as a kind of huge information data center that handles tons of data and transfers it from one plant to another. However, the roots don’t play a major part in this information exchange. The main components are the vast array of fungi that are present underground. While mushrooms might be the most famous type of fungus, most of their bodies are made up of a mass of thin threads, known as mycelium. Research has shown that these threads act like underground Internet fibers, linking the roots of different plants.

The family of fungus that links trees is called mycorrhizae.

That sounds cool, but what’s the purpose of this so-called Tree Internet?

This is where things get interesting. These fungi aren’t just sitting there idly; they share nutrients and information with the surrounding plants, effectively forming a sort of a mutual relation among the plant community.

Forest ecologist Suzanne Simard and her colleagues from the University of British Columbia have made an interesting discovery. Big trees help the small ones flourish by supplying nutrients to them. She showed that Douglas fir and paper birch trees can transfer carbon between them via this versatile mycelia. 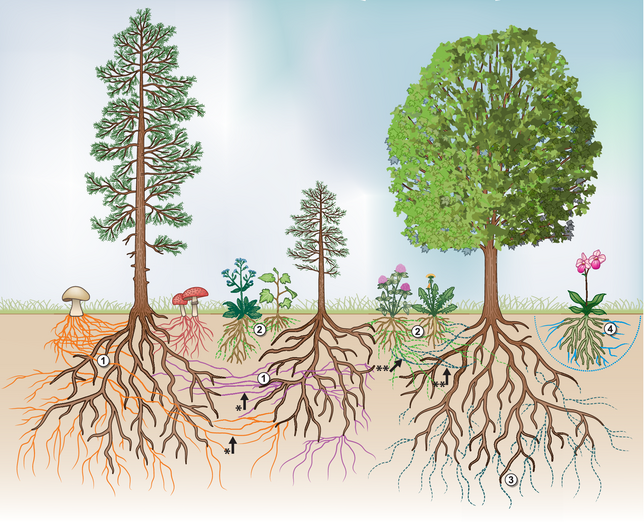 The range of plants provide fungi with food in the form of carbohydrates. In exchange, the fungi help the plants suck up water and provide nutrients like phosphorus and nitrogen via their mycelia. This is basically a symbiotic process.

Another interesting thing to note is that this fungal network boosts the host plants’ immune system, because when a fungus attaches to the roots of the plant, it releases defense-inducing chemicals. This makes the plant more resistant to diseases.

Other Forms of Communication Among Trees Just like the plant Internet, there also exists a sort of a mobile phone service in the plant kingdom.

The plants release defensive chemicals above the ground that kills pests and also warns the surrounding plants of the incoming attack. Above-ground chemicals can also attract predators that eat pests.

They organize attacks on unwelcome plants by spreading toxic chemicals through the fungal network. This is the tree form of cybercrime. Just as there exists a dark side of the Internet, these sorts of hidden crimes are also committed among plants. Toxins are transmitted via the fungus. (credits: AdrianC/Shutterstock)

There are many plant goons that harm other species of plants. For example, some plants steal from each other using the fungal network. There are also plants that don’t have chlorophyll, so unlike most plants, they cannot produce their own energy through photosynthesis. Plants like the phantom orchid get the carbon that they require from neighboring trees by stealing from their fungal network. They might look pretty, but they’re the goons of the plant kingdom.

From all this information, we can conclude that plants aren’t really that different from animals. They also commit petty crimes against each other. I guess that’s the way Mother Earth created us, in order to maintain equilibrium!