All water bodies on Earth, regardless of whether it is freshwater or seawater, will appear to be a given color based on a number of factors, including purity, depth and composition of the bottom, among others, all of which will affect how light is absorbed and reflected, and thus how we see it.

If you have ever been to the Caribbean, you probably still dream about the crystal-clear blue waters around certain islands, but if you’re a native of Maine, you may associate the stormy ocean with a dark grey color. Perhaps you live near a river in India, or a massive lake in Wyoming, and your idea of the “color” of water is slightly different. While many people think of water as being blue, there is actually a great deal of variety in the color that water can appear to our eyes. 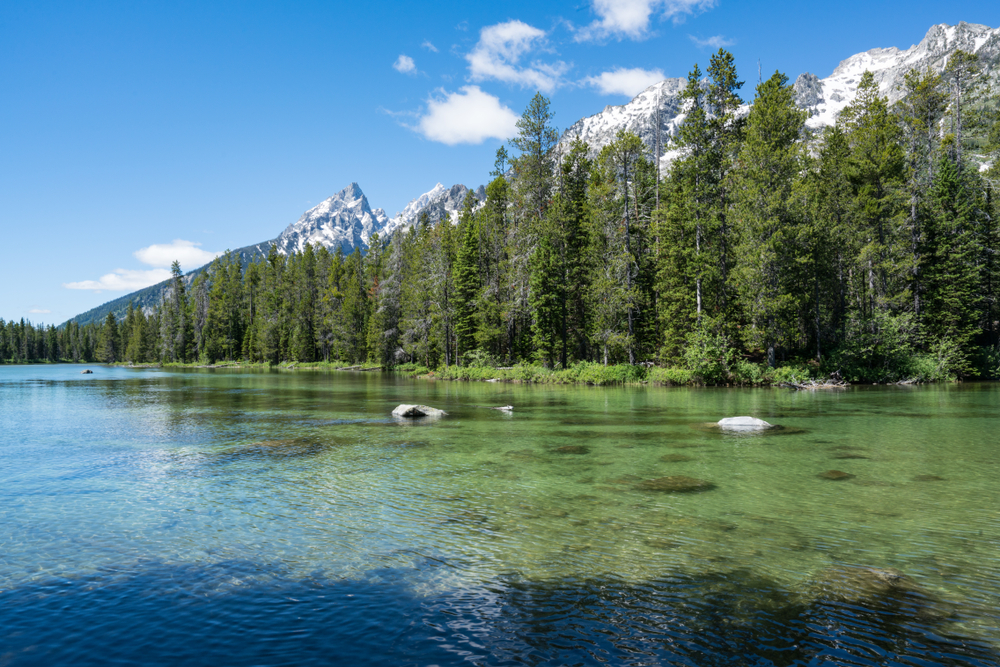 So why is the view over a tropical beach different than a riverbank in the Congo? What makes the water around a coral reef different than the water in the middle of the ocean? What creates such a surprisingly large range of colors?

Seawater and freshwater differ in terms of salinity, density, freezing point and tonicity, but these factors don’t alter how the water interacts with light. Yes, before we can dig into the variation of colors in bodies of water around the world, let’s take a quick refresher on the nature of light and how it interacts with the natural world.

When we see a “color”, we are actually seeing the wavelength of light that is not absorbed by the object being observed. Natural light is composed of all the colors of the visible spectrum, but most of the wavelengths are absorbed, while one “color” is reflected back at our eyes. For example, when sunlight passes into our atmosphere, the short blue wavelengths of light are scattered more easily, giving the sky its signature blue color, as the other colors are more readily absorbed than reflected. 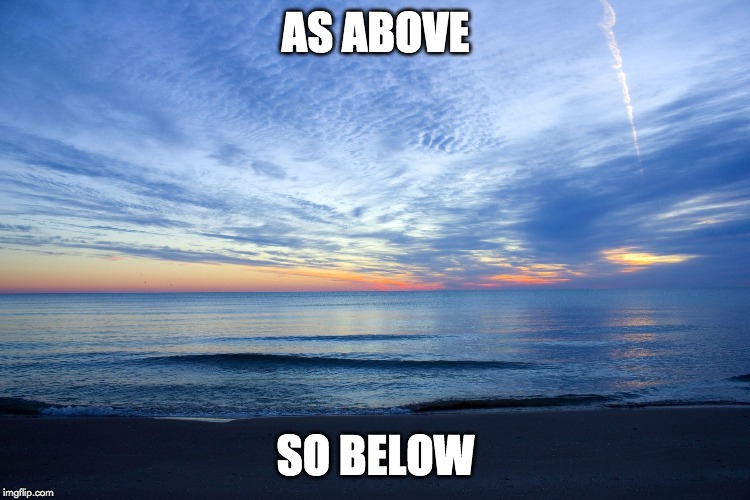 This might come as a shock—if you’ve never drank a glass of water before—but water is naturally colorless. However, the same thing is not true if water is collected in a large quantity. When natural light interacts with a water body, most of the red, orange, green and yellow wavelengths are absorbed by the water molecules, while the blue wavelengths are reflected back, giving the water a blue shade. Thus, in answer to the original question of this article, seawater is not inherently darker or lighter than freshwater; the factors explained below will determine what shade we perceive.

When considering the wide range of water colors identified around the world, from black and red volcanic lakes to bright-green rivers and royal-blue stretches of ocean, there are a few basic elements that can explain their variation, including water depth, weather, the composition of the water body floor, and the purity of the water.

One of the most basic explanations that parents give their children about the color of water is that it reflects the sky, which is also blue. This convenient half-truth does partially contribute to the color that we see when we look out over the ocean. The surface of the water does reflect some of the sky’s color, which adds to the perception of blueness, but this is far from the only factor. The surface of a lake will not look quite as blue under a cloudy sky, regardless of whether it is being struck by any rays of sunlight. 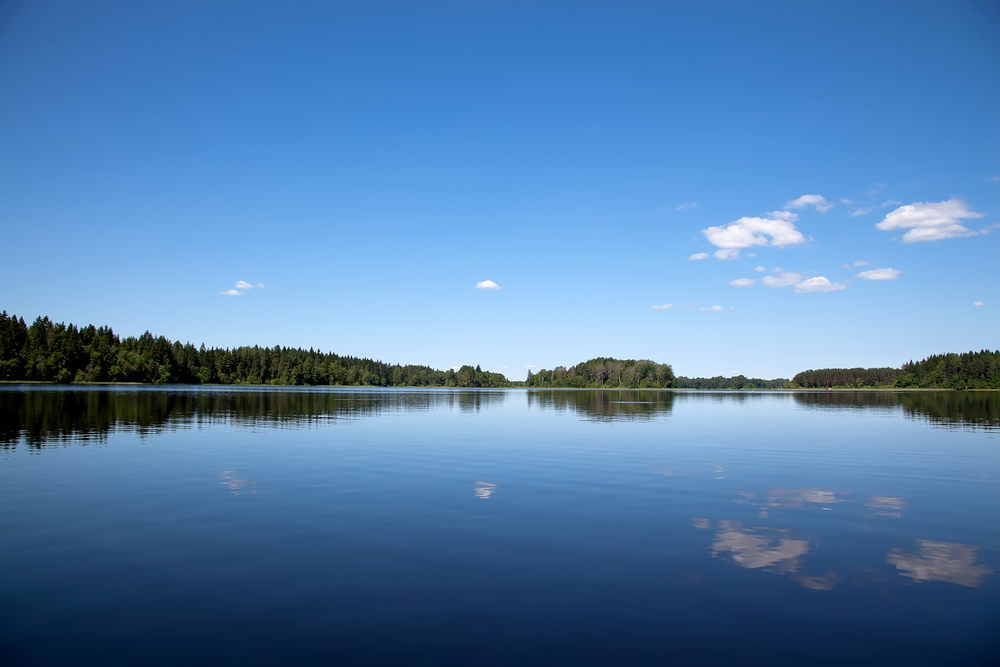 When looking at shallow water, you are not only seeing the reflection of the sky and the natural blue color of water, as explained above, but also light being reflected back off the ground. The light being reflected off the sand comes back up to lighten the perceived color that we see. When you visit the Greek isles or wade along a shallow Caribbean shore, the light-colored material beneath the water will cause the water to be a lighter blue. However, when you travel out to the middle of the ocean and look down, the light that strikes the water will be entirely absorbed, reflecting only blue light, rather than any reflection of the sea floor. For that reason, deep waters often have a much deeper and richer blue than shallow waters.

Not only is the depth of the sea floor or river bottom important, but also what that surface is made of. If light is striking a massive seaweed forest below the surface, versus the colorful offerings of a coral reef, the color of light being reflected will be affected. Sand in various parts of the world are often composed of local geological formations that have worn down over millions of years; different colors and qualities of sand will affect how light is absorbed and reflected back in shallow waters, providing a wide spectrum of potential colors.

Perhaps the most important consideration in the coloration of water is the purity of the water body itself. If you have ever seen an estuary (a geological point where freshwater continually mixes seawater), then you know that these two water bodies are rarely the same color, owing to the difference in their solute and particulate concentration. Water color is heavily influenced by the minerals dissolved in it, which can lead to red rivers that are high in iron content, or black volcanic lakes rich in oxygen or sulfur caused by underwater upwellings of steam and gas. Depending on what mineral deposits rivers contain within them, rivers may vary from deep blue and grey to bright green or pink. 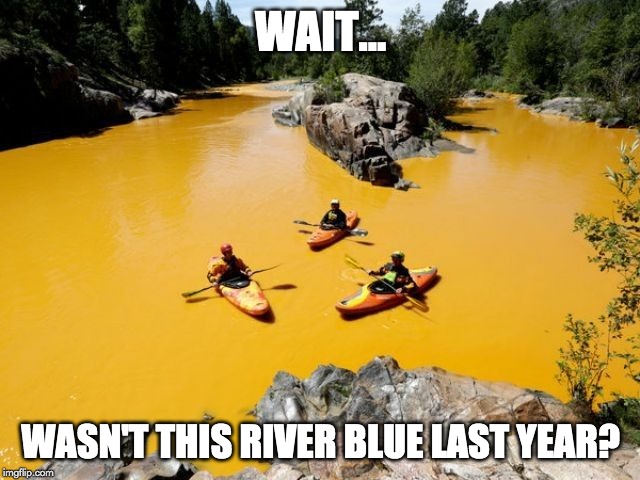 Aside from the minerals found in rivers, lakes and oceans, there are also forms of life that greatly affect water color, namely algae. Algae-rich water, depending on the species of algae present, can range from a dark green to red or yellow! Pollutants are also a factor in water color, whether manmade or soil runoff or damage from storms. Various chemicals and waste materials will dye the color of rivers and lakes, such as the Cuyahoga River in Ohio, which has actually lit on fire numerous times due to its dangerously high level of pollution. Rivers may run brown or black following major storms or floods that kick debris and soil into the natural flow of the water.

Although the question posed by this article compared the color of seawater and freshwater, there is no intrinsic relationship or superiority between the two. There can be dark oceans and bright rivers, but there can also be turquoise seas and black lakes.

The factors that must instead be considered are the depth of the water, the composition of the water body, the impurities present in the water, and even the color of the sky overhead at the time of observation!

Next time you’re standing on the edge of China’s Yellow River, considering a swim in one of Australia’s pink lakes, or snorkeling in the crystal-blue waters of Grand Cayman, you’ll have a better idea of why the world’s waters are so wondrously diverse!

References
The short URL of the present article is: http://sciabc.us/zyUH1
Help us make this article better
Prev Article Next Article
About the Author