Bees are disappearing at an alarming rate due to the excessive use of pesticides in crops and certain blood-sucking parasites that only reproduce in bee colonies. It’s true that the extinction of bees would mean the end of humanity. If bees didn’t exist, humans wouldn’t either.

For many of us, bees are annoying. We think that their only purpose is to keep buzzing around and dropping their formic acid-laden stings on random people (this impression will certainly change when we stop getting spoonfuls of sweet honey in our morning cereal).

The truth is, bees are crucial elements of our environment, and almost never get the credit that they deserve.

Bees are the primary initiators of reproduction among plants, as they transfer pollen from the male stamens to the female pistils.

Since 2006, the population of bees has declined considerably (source). Pesticides, disease, parasites, and poor weather due to global warming have played a major role in this worrying decline.

Bee population has been on a decline in recent years. Some species were added to the endangered list in 2017 (seven species of Hawaiian yellow-faced bees) and 2018 (The rusty-patched bumblebee, Bombus affinis) so as to protect and revive their numbers. There have been a number of reasons for this decline. Let’s take a look at few of them.

Why are bees endangered?

Bees are going extinct mainly because of two reasons: pesticides and parasites.

Since the end of World War 2, the use of pesticides in agriculture has increased exponentially. 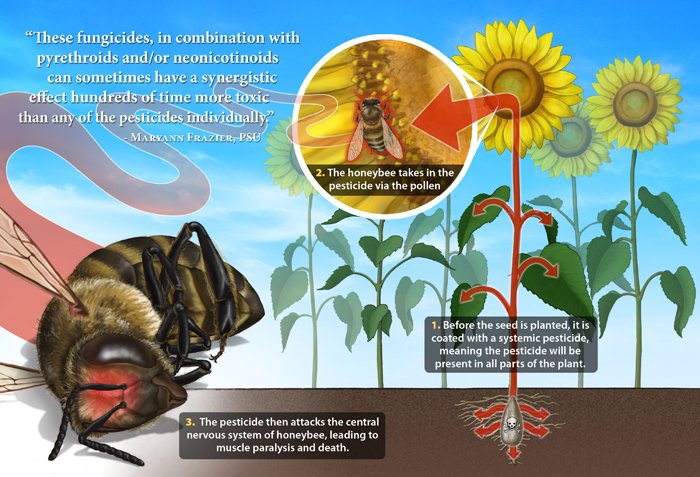 This intense use of pesticides, known as neonicotinoids (a relatively new class of insecticides that affect the central nervous system of insects, resulting in paralysis and death), has had a major role in the bees’ decline (source). When bees are exposed to neonicotinoids, they go into a shock and forget their way home (sort of like the insect version of Alzheimer’s).

Along with pesticides, parasites known as Varrao mites (also called Varrao destructors) are also responsible for their death (source). The Varrao can only reproduce in a bee colony. They are blood-sucking parasites that affect adult and young bees equally. The disease inflicted by these mites can result in bees losing legs or wings, essentially killing them.

Beekeepers started reporting a sudden reduction in the number of bees. The adult bees disappeared suddenly and mostly together. The hives were left with just the queen and immature bees. Even the food was present in high quantities. In some cases, few adult bees were found attending to the queen. Reasons mentioned above are two of the many factors that play a role in this disorder.

Some plants are pollinated by wind, but that rate is very slow. Insects are the primary pollinators on the planet. Beetles and butterflies also pollinate, but bees are the most efficient insects for this purpose. Without bees, we wouldn’t be able to savor delicious apples, cherries, and many other fruits and veggies (blueberries, avocado, broccoli, most leafy greens, cucumbers, pumpkins, and many more). Almond trees would be among the first casualties. 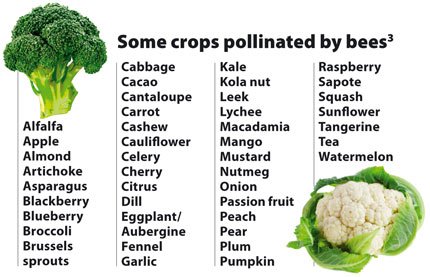 If bees went extinct, there would be a massive decline in the production of crops. Although crops like rice and wheat don’t require insect pollination, can people survive by eating rice and bread all their life?

Herbivores, who depend on certain plant species, will be affected first. They would go extinct if plants ceased to exist. For example, many cattle used for milk and meat depend on alfalfa and lupins, both of which depend on insect pollination. If the cow’s food supply declines, then meat and milk production will decrease. This will seriously affect the human diet.

Due to the declining population of herbivores, tertiary carnivores will begin to suffer immediately. The only beneficiaries from this scenario would be scavengers (eagles, vultures, ravens etc.)

Canola, which is grown to use as both a fuel and cooking oil, depends highly on pollination. It is also used to produce biofuel. If we were to run out of biofuel, we’d have to rely on fossil fuels completely, thus putting further pressure on the environment.

Cotton is very reliant on pollination. The disappearance of bees will lead to a huge setback in cotton production, as it will significantly reduce our choices in clothes (good luck enduring the humidity of the tropical regions while wearing nylon attire). 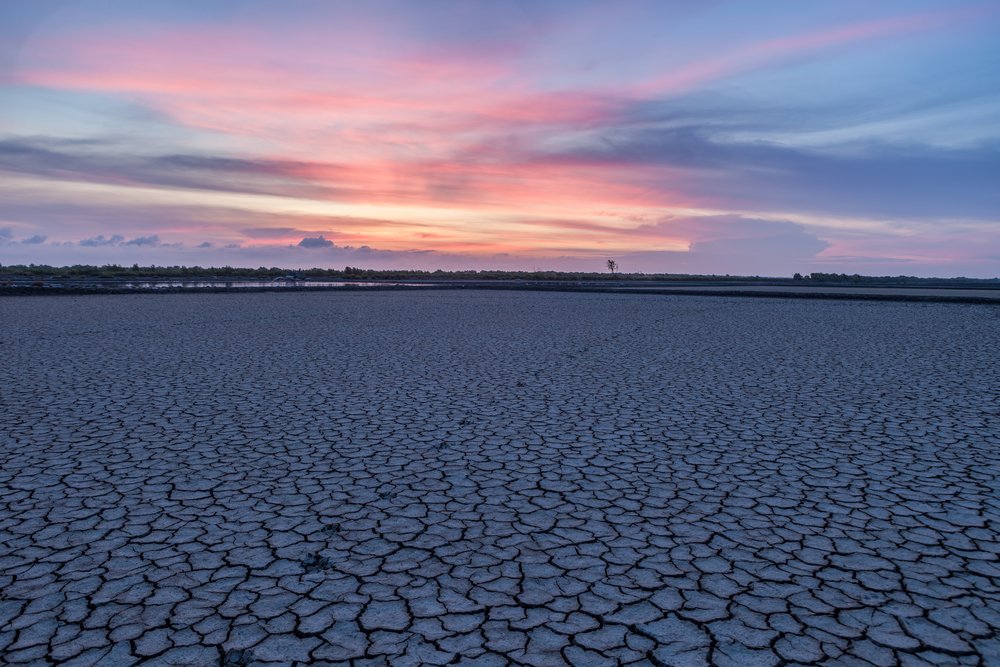 This will be a common sight if bees disappear (Credits:WichitS/Shutterstock)

Since most plants would be unable to grow, grasslands would become barren and large-scale desertification will take place. Landslides would wipe out villages in one sweep. Ultimately, Earth will become one large plastic-laden desert.

Less production of food crops will ultimately lead to worldwide famine. Hunger and poverty will be very common. Freshwater will start drying up as well as, as there will be less trees for water retention to occur. With less water and diminishing food, humans will die of thirst and starvation. Fertility would also suffer a setback, followed by a drop in the rate of reproduction. Ultimately, we wouldn’t be able to sustain and would be forced into extinction within a few hundred years.

Unless scientists build robotic bees to do the jobs that honeybees once did, we’re ultimately doomed. And although this isn’t the most serious repercussion, we would never again taste that sweet, savory honey that we forcibly steal from honeybees every day.

The tragic irony of this is that by killing bees, we’re only hurting ourselves. Our survival depends on the health of the planet and its species, and unless we begin to face this fact, we will continue to contribute to our own demise. Unless we take drastic measures to save the bees, the planet’s survival is in doubt.