Spittlebugs create a cocoon of their own spit to protect themselves from predators. Their spit cocoon also prevents them from drying out. Why they create it from their own spit and not some other material is a question that scientists are still exploring.

Imagine living in a home made entirely of your own spit. Gross, right? Well, that’s the way the spittlebug chooses to exist.

Every spring, young and immature spittlebugs find shelter in bubbly cocoons made of their own saliva. Take a walk through a garden and you’ll notice the white frothy mass on many plants.

So, what’s the point of this odd behavior? Why does the spittlebug make its home out of saliva?

What is a spittlebug?

The spittlebug is a tiny (hardly 2 cm long) insect that belongs to the order of true bugs—Hemiptera—and the superfamily Cercopoidea. These little guys are plant pests, like their relatives, aphids and cicadas.

Like so many mysterious beings, the spittlebug has an alias. “Spittlebug” is only the name of the larvae, or nymphs, as entomologists might insist we call them, that encases itself in a foamy home. The adults are called frog hoppers, because they look like frogs and can jump as high as 70 cms, which is very impressive, considering these little fellows are only a few centimeters long.

However, just because the adult has the name froghopper doesn’t mean that the juvenile versions can’t hop. A spittlebug can actually jump over 100 times its own length!

On the left is a spittlebug, and on the right is the froghopper. (Photo Credit : Sandra Standbridge & Suburban Bugs/Shutterstock)

There are many species of spittlebugs with different plant hosts, lifestyles (the spittlebug is a huge fan of detox juices and clean eating), and appearance.

The adults lay their eggs in autumn, and by spring, the little nymph spittlebugs are ready to molt into froghoppers.

It is the water from the xylem tubes that allows spittlebugs to make their homes.

When I said that the nymphs live in their spittle, that wasn’t entirely true. They do live in white fizzy abodes, but that isn’t actually their spit, in the sense that it isn’t secreted from their mouth.

Instead, it’s the spittlebugs rear end that secretes their cocoon (i.e., a home made of poop). 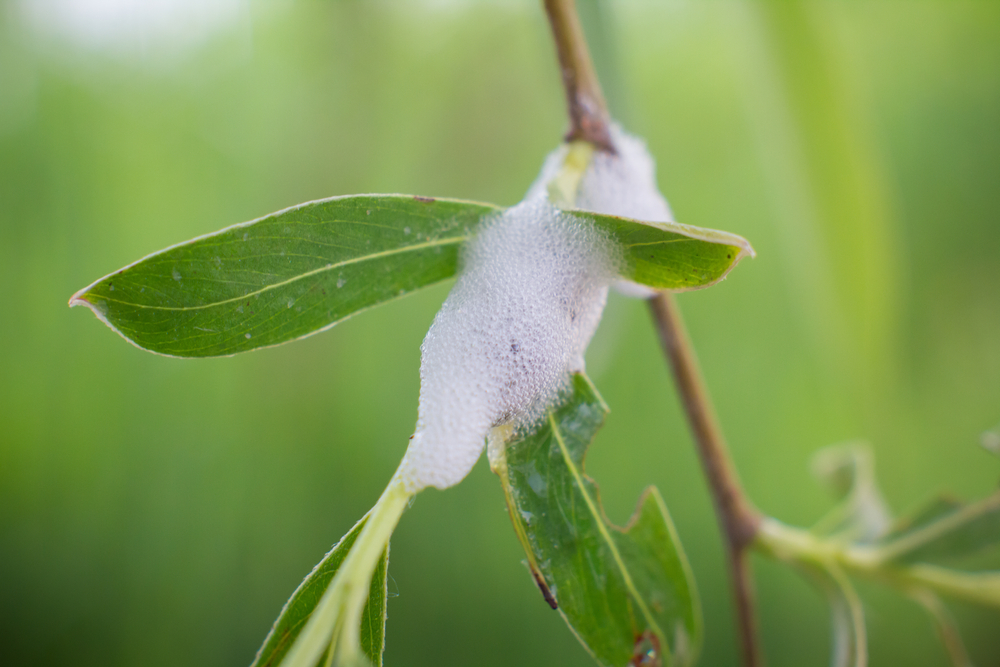 The spittlebug feeds with its head facing downwards and its butt pointing up.

The nymph’s main diet is the nutrient-rich water coursing through the plant’s xylem vessel. It sucks up the xylem juices by inserting stylets (mouth parts) into the xylem pipe and basically sipping the liquid as it flows by. Since it’s mainly water, the xylem juice (not a technical word) is quickly processed by the nymph, who can produce watery excreta that is approximately 280 times its own body weight!

Into this watery excreta, the nymph’s epidermal cells in its abdomen secrete surfactants that reduce the surface tension of water and allow bubbles to form. It then blows air into this excreta and detergent mixture from its trachea—the tubes that allow insects to breathe. Finally, the spittle home is ready.

However, not all spittlebugs live in spittle. Those in the Machaetotidae family are called tube spittlebugs because, predictably, they live inside tubes that are calcareous and decidedly not spittle (or poop!).

The function of the spittle mass

The actual function of spittle cocoons is surprisingly unclear, though it is believed that the spittle mass might help to keep the nymphs moist and hide them from predators. In fact, many frogs adopt a similar strategy, encasing their own young after creating frothy surroundings to avoid predation. This seems to be an effective strategy, considering that spittlebugs don’t have any natural predators. 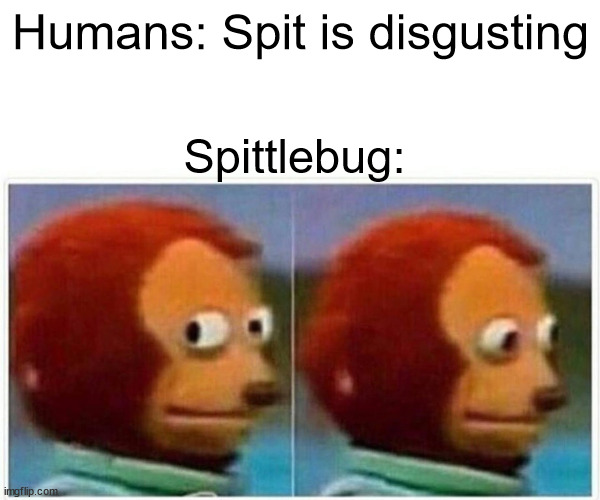 Finally, after 1 to 3 months of feeding, the spittlebugs emerge as froghoppers. These froghoppers will then find a mate and lay their eggs during the autumn to winter period. In the spring, a new generation of spittlebugs will hatch, ready to suck the water from the xylem vessels of plants and create their own spittle masses.

Unfortunately for us, spittlebugs are plant pests. By continuously sucking out the plant’s water supply, the bug wilts or even kills the plants. Rice, wheat, and even roses fall prey to these heartless suckers.

That being said, for us ordinary folks without agriculture problems, it is fascinating to see their frothy homes emerge every spring. Nature certainly does find the most bizarre ways to keep its creatures alive!