Cats are scared of cucumbers because it’s their natural reaction to anything that sneaks up on them without making any noise. Cats tend to be scared or wary of the unknown,

The internet is a bizarre place. If you take the time, 5 hours or so, you’ll get sucked into the powerful Charybdis-like whirlpool of internet content. On such a day, I time traveled from toddlers tasting lemons for the first time to watching cats getting scared out of their living daylights. In the video, cats of different types were recorded leaping in the air out of sheer terror and fear upon seeing a cucumber. Yes, just your average, green cucumber!

Naturally, one must question the scientific verity of anything online. As it turns out, the fear the cats show is definitely real, but the threat – the cucumber – is not what’s causing them distress. This mean-spirited trick on our beloved cats does not show the cat’s fear of a benign fruit (the correct classification for the cucumber). It has more to do with the nature of the prank and the resemblance to a slippery friend.

Cats Vs. Cucumbers: Why Are Cats Scared Of Cucumbers?

Cats may associate cucumbers with snakes

The cucumber looks like a common cat threat – the snake, predators known to attack and even eat cats. This resemblance to something threatening can be alarming for a cat. 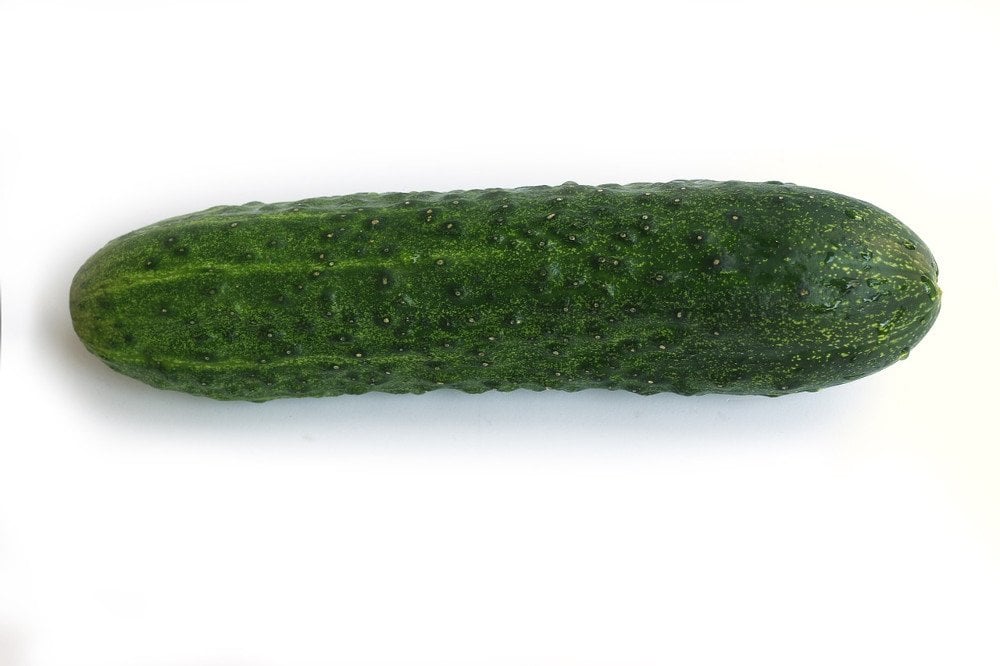 This elongated, green object can appear quite dangerous to some animals. (Photo Credit: Pixabay)

According to Jill Goldman, a certified animal behavior researcher in Southern California, cucumbers may look like snakes to cats, thanks to the green, elongated exterior that this vegetable has.

Cats are scared of things sneaking upon them.

As it turns out, it is not the cucumber placed surreptitiously behind a cat, but pretty much anything that sneaks up on a cat could potentially scare it. Cats are sharp and alert animals, and as such, they always keep their guard up and have good situational awareness.

If you have seen such videos of cats getting scared of cucumbers, you may have noticed that cucumbers are deliberately put behind cats when they are peacefully enjoying a meal with their heads buried in the food bowl.

Cats only eat when they are sure that they are not immediately threatened by anything/anyone in their environment; in other words, cats associate their ‘food stations’ as areas where they are completely safe.

So when a cat discovers a green cucumber lying on the floor behind it, it freaks the cat out because it does not expect it to be there.

“I think that the reaction is due to the novelty and unexpectedness of finding an unusual object secretly placed while their heads were down in the food bowl,” says Dr. Roger Mugford, an animal behavior specialist. Cats would not normally find cucumbers lying on the ground, so the sheer novelty of it all freaks them out. A cat, or in fact, most animals, eat only when they’re sure that they are not under any physical threat. (Photo Credit: Pixabay)

Unknown objects, which might look threatening, initiate the cat’s “startle responses”. The jumping, increase in heart rate and aggressive response is how the cat reacts to a surprise. As soon as it perceives the stimuli, the cat’s muscles stiffen, and it arches its back. The heart rate of the cat increases, and its fear response is heightened.

Such responses aren’t limited to cats. Humans and other animals react similarly to surprises. You are likely to have jumped or screamed at the sound of sudden loud noise, your heart rate increases, and you become nervous in the next minute or so. 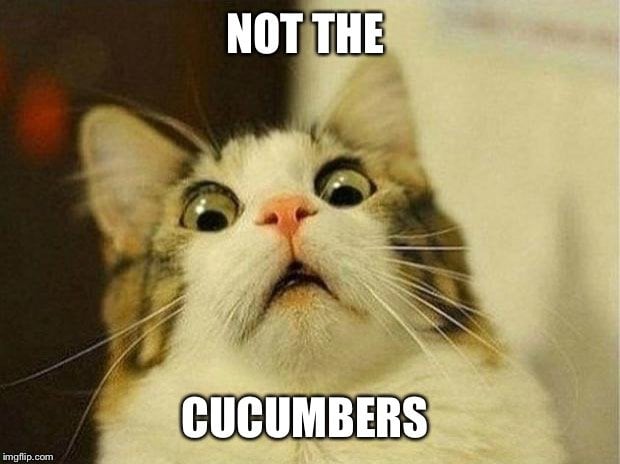 This arc involves the brainstem, the lowermost part of the brain connecting to the spinal cord, parts of the limbic system involved in perceiving fear and threat, and the hypothalamus and associated pituitary gland, which release hormones such as adrenaline, which cause many of the physiological changes in the body.

Why you shouldn’t scare cats with cucumbers

Seeing a cat jump in the air out of sheer fright might make you laugh, but it is not actually amusing, least of all to the cat.

As mentioned earlier, cats get really scared by the sudden appearance of a green invader and want to get away as soon as possible. To getaway, a cat may break something, hurt others in the area or even injure itself. It may also lead to prolonged stress for the cat. 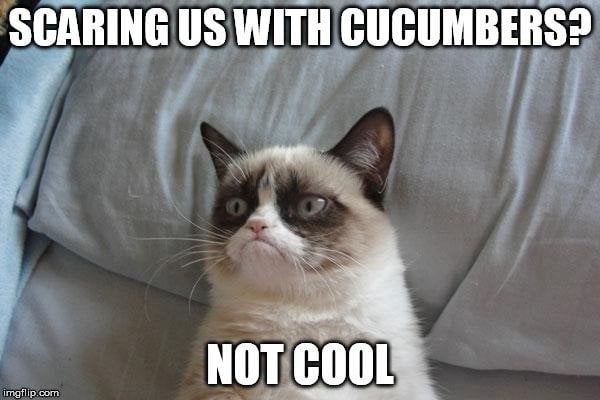 Scaring cats with cucumbers can cause stress and anxiety in them.

Research on the effects of triggering the startle response on rodents and humans has shown that repeated “surprises” can cause anxiety and sustained stress. It can also be applied to cats and many other mammals. Persistent anxiety and stress can reduce your pet’s overall well-being and impair their immune system, making them more susceptible to disease.

Trying to scare a cat like this is not only wrong but also quite cruel. Instead of shoving a new toy or a cucumber at them, try to introduce it to your cat gradually. Repeated exposure will eventually make the cat comfortable with the cucumber or whatever else. They get habituated to the object, as a neuroscientist might say.

Soon they will be able to distinguish that cucumber is not a snake and only a harmless edible cylinder.

Cats vs. Cucumbers! Take this quiz to test your knowledge!