Magnetic tapes use ferromagnetism and electromagnetic induction to read, write and play back audio.

When one has to create video content or music, camcorders and smartphones immediately come to mind. What doesn’t come to mind is using magnetism to create and share that valuable data! However, not long ago, magnetic tapes were the dominant medium for creating and storing audio-visual data, and have actually been around for over a century!

Before your conjure up a stereotypical image of magnetic tapes in vintage devices like cassettes, you might be surprised to learn that magnetic tapes are still a convenient and durable medium for long-term storage, and keep improving every passing year!

Before we get into all that, let’s rewind the tape to the 1900s.

A Revolution In Audio Recording And Storage

In 1900, magnetic recording on wire was introduced by Valdemaar Poulsen, a Danish engineer, for exhibition at the World Fair in Paris. In 1928, magnetic tape was introduced in Germany to record and store audio.

Soon enough, engineers all over the world picked up on the invention and improved upon the designs with each successive iteration.

The basic principle behind the working mechanism remains the same for all magnetic tapes, irrespective of the year of manufacture. As materials science has advanced, tapes with suitable physical and chemical properties such as thin width, high flexibility, high data density, and resistance to humidity, were developed in the latter half of the twentieth century.

Even as they improved, the principle of operation remains the same to this day. Their construction and operation is discussed below. 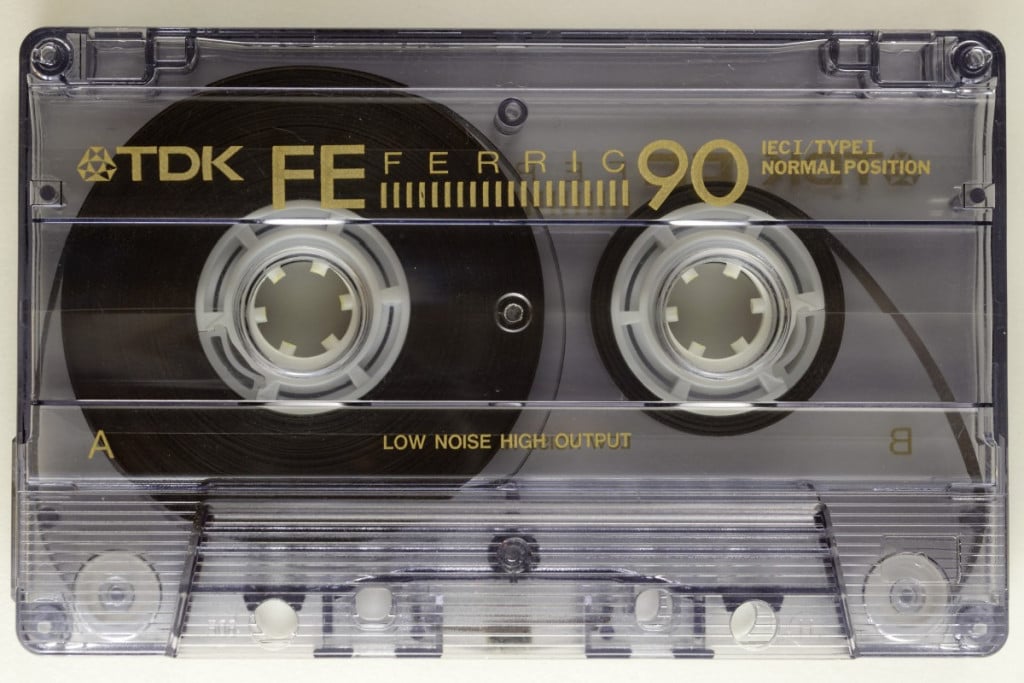 The tape consists of three layers: a top coat, a substrate in the middle, and a bottom coat. 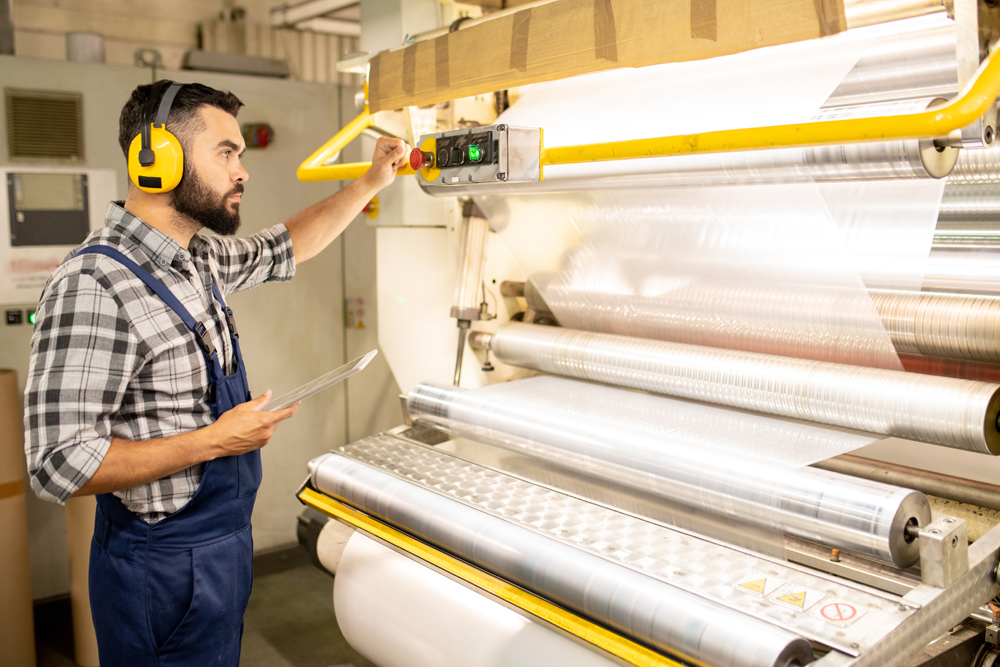 PVC films like these are used to form the substrate (Photo Credit : envato)

The tape-head consists of three sub-heads: A read head, a write head, and an erase head, arranged linearly. All three heads are composed of a ferromagnetic ring with a slit at the bottom where the head meets the tape below (doesn’t make physical contact). Coils of wire are wound around all three heads.

A pair of tape-guides is present on both sides of the tape head and touch the tape, providing mechanical tension to the tape. The guides rotate in sync at identical angular velocities. One guide feeds the tape to the tape-head, while the other guide retrieves the tape from the tape-head. The rotation is synchronized to allow the required manipulation of the magnetic pigment. 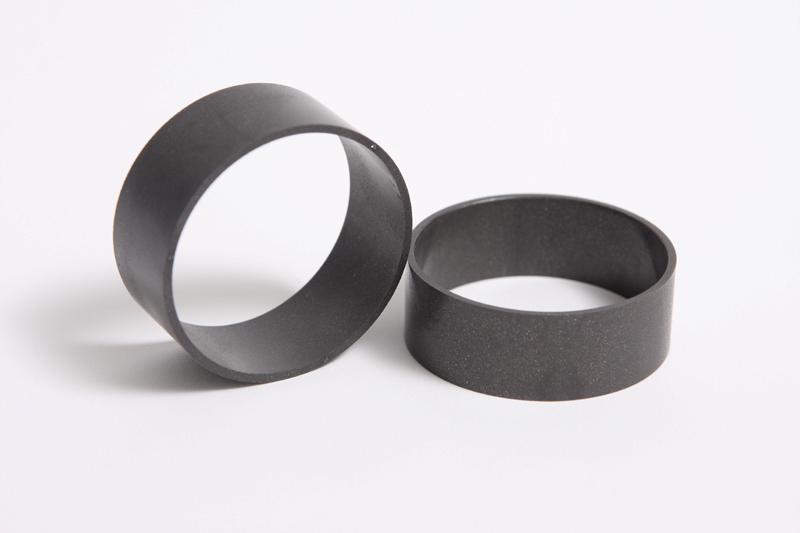 A few concepts of electromagnetism and solid state physics must be introduced as a pre-requisite to understand the working of magnetic tapes. 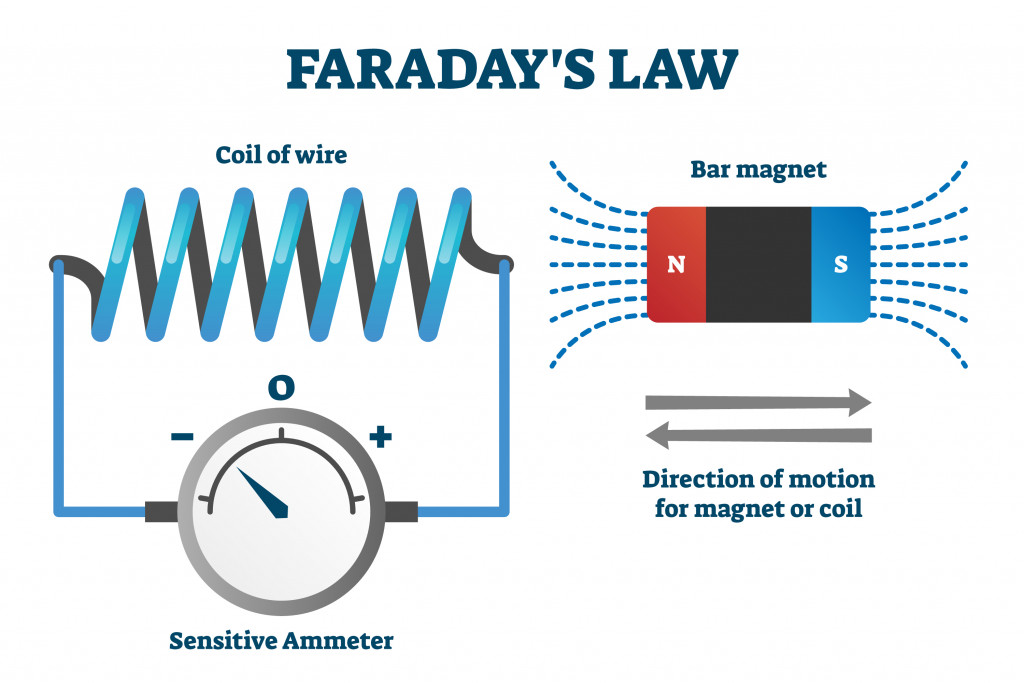 Changing the positions of wire and magnet relative to each other changes the amount of magnetic field penetrating the coil. This induces a current in the coil (Photo Credit : VectorMine/Shutterstock) 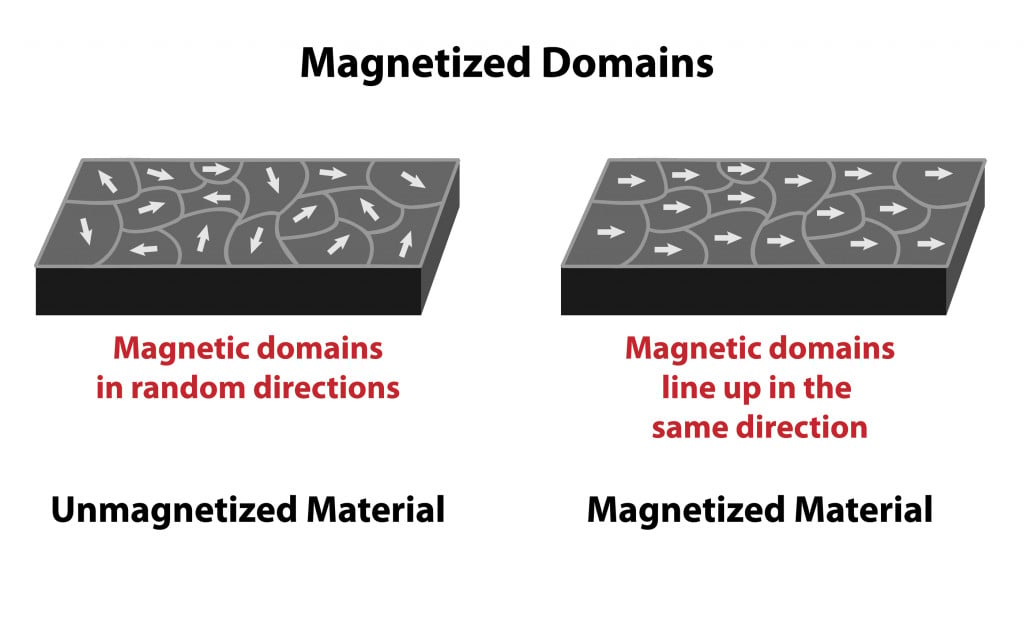 Magnetic domains in a ferromagnet line up in the presence of an external magnetic field to reach an energetically stable state. Once the external field is removed, the orientation of the domains is retained, thus permanently magnetizing the material (Photo Credit : OSweetNature/Shutterstock)

Illustration of the working mechanism of magnetic tape (Photo Credit : Fouad A. Saad/Shutterstock)

Playback is the reverse of the recording process.

The magnetized tape is fed into the erase-head, which applies a changing high-frequency and a high-amplitude current, inducing a proportional magnetic field in the head. This field is permeated the ferromagnetic ring into the tape, erasing the previous magnetization of the pigments.

The key word is changing. A changing current produces a changing magnetic field, which randomizes the previous magnetization of tape.

All tape recorders follow this same basic principle. Having three heads is optional; the write-head can also function as the erase-head, but this removes the functionality of erasing and writing simultaneously (feed the tape into erase-head and then into the write-head)

Even though flash drives have replaced magnetic tapes in most multimedia applications, magnetic tapes provide a durable and cheap backup option. Even today, magnetic tapes are being constantly improved because of the convenience of storing thousands of gigabytes of data in a small corner for decades, without any appreciable loss in quality. Thus, this technology, which has been around for over a hundred years, is primed to continue its streak!